Bilibili and the Mobile Gaming Adventure

The strong synergy of Bilibili's online video platform with its mobile gaming business has made the company a top ACG mobile game distributor in the Chinese market. 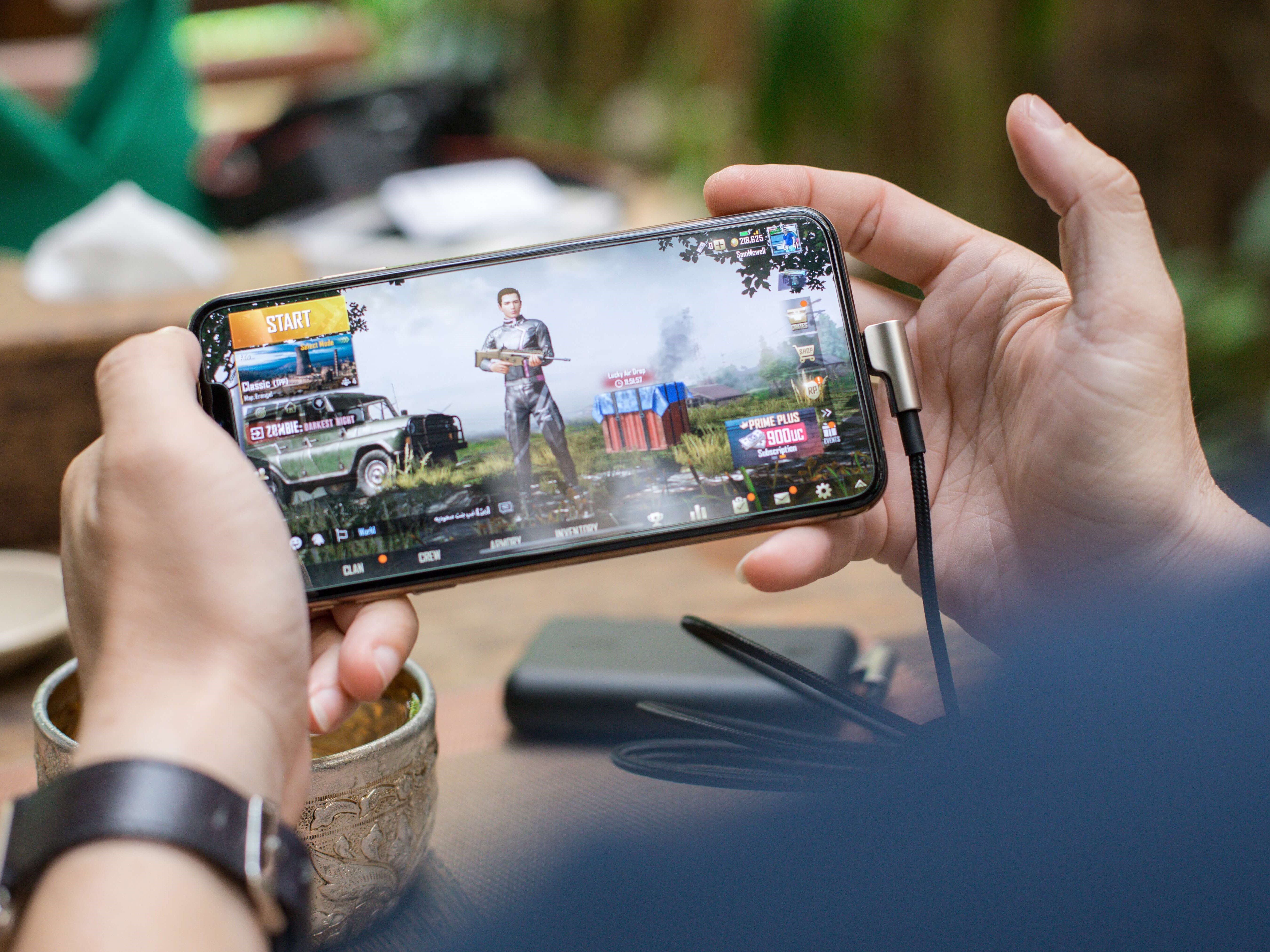 If you ask a random young Chinese person, ‘what kind of company do you think Bilibili is?’ there is a large possibility that they will tell you it’s an online video platform.

If you ask a random Chinese young person who likes e-sports, ‘what do you think of Bilibili?’ it is very likely that you will receive an answer like, ‘I use Bilibili simply because they signed the streamers that I continuously follow and have the exclusive broadcasting right of the e-sports event that I am interested in –I don't really care about whether the platform is Bilibili, Huya or DouYu, just whether they can deliver the names that I want."

If you ask a random Chinese young person who plays the Chinese version of ‘Fate/Grand Order’ – a hot Japanese ACG mobile game – ‘what you think contributed the most to Bilibili's survival in the past few years?’ probably they will say: ‘Fate/Grand Order’ – for sure, we contributed more than half of the company's annual revenue from 2016 to 2018, there was no chance for Bilibili to get listed without having Fate/Grand Order. Yet the operation team of the company did not provide us players the status and welfare we truly deserve.’

However, if you continue to pursue the matter and consult about them about whether they would be happy if the operator of the Chinese server were to change to Tencent or NetEase, most of the ACG mobile game players will tell you ‘no, it may become even worse. If you feel bad about Bilibili's operations regarding the Chinese server, the best way is to directly go to the Japanese server or the US server.’

In recent years, a suspect view has emerged that supposes that Bilibili is gradually moving towards ‘de-gamification.’ The original aim of this opinion holds that Bilibili is gradually optimizing its income structure and seeks to not let mobile games dominate its revenue stream, which is correct. What has been misinterpreted is the level of marginalization of mobile gaming.

The main reason that leads to this misunderstanding is that people think that the online video sharing platform of Bilibili and its mobile gaming publication and operation business are two parallel segments. In fact, the two parts have close strategic synergies. They can be used to refer users from one side to the other, and sustain them within the ecosystem. More commercialization solutions can be launched while cultivating both sides.

To understand this, we have to first clarify the nature of the two business segments of Bilibili.

The other mainstream online video platforms in China – iQIYI, Tencent Video, Youku and Mango TV – mainly focus on delivering Professionally Generated Content (PGC), and operate in a similar matter as Netflix, Disney + and HBO, while Bilibili's platform is dominated by Professional User Generated Content (PUGC), where 90% of videos are made by individuals and small studios. Although its commercialization strategy is significantly different from YouTube, the two share certain similarities in terms of the nature of content providers. Apart from the PUGCs, Bilibili also covers the PGCs of certain categories, most of which are copyrighted Japanese animations. It's better to depict Bilibili's platform as a community – especially for ACG fans, its loyal user group – in which it employs video as the medium for interactions, rather than text, as in traditional ones.

As for the mobile gaming market in China, a majority of projects that can achieve a certain scale can be classified into three categories:

1. MOBA and casual games with a high number of Daily Active Users (DAUs) and low Average Revenue Per User (ARPU). These meet the demand for social interactions and time-killing.

2. MMO RPGs based on classic IP. A type of game project that mainly targets males above 30, the revenue of the projects typically comes from the purchase of items that can add more power to the game characters of users.

3. ACG games, most of which are RPG Gacha games. Here users mostly care about the IP, storyline, characters' design and illustration, the revenue of the projects typically comes from the purchase of in-game resources that can provide trials for users to obtain certain characters.

From this brief introduction to the nature of Bilibili's video platform and gaming business, it is not hard to find out that both share a strong 'ACG' gene. Bilibili, as the largest interactive community of ACG fans in China, has a great advantage in publishing and distributing ACG games. The overlap of the player pool of ACG games and the users of Bilibili's video platform, plus the deep understanding of the ACG category accumulated during its ten-year experience, means the company can reach out to a large number of potential users on a new game project and help to increase the life-span of a single project through elevating the engagement level of ACG game users (by providing a decent community for users to place and watch fan videos).

In this case, it is not hard to understand that some content producers who lack marketing and operating capabilities contract with Bilibili to exclusively publish its projects and allow it to share more than half of the revenue of the project. Even for mainstream gaming companies like NetEase and miHOYO, which normally publish the game they produced themselves, Bilibili is seen as an important distribution channel – they sign joint operating contracts with it.

To make it more concrete, here we look into two cases, to see how Bilibili's video platform and mobile gaming business synergize. The first one is Fate/Grand Order and the second one is Azur Lane, which has respectively been recognized as 'Mobile game 1' and 'Mobile game 2' in all its past annual reports. For both projects, Bilibili acts as an exclusive distributor in mainland China, taking charge of all the publication and operation activities on the Chinese server. 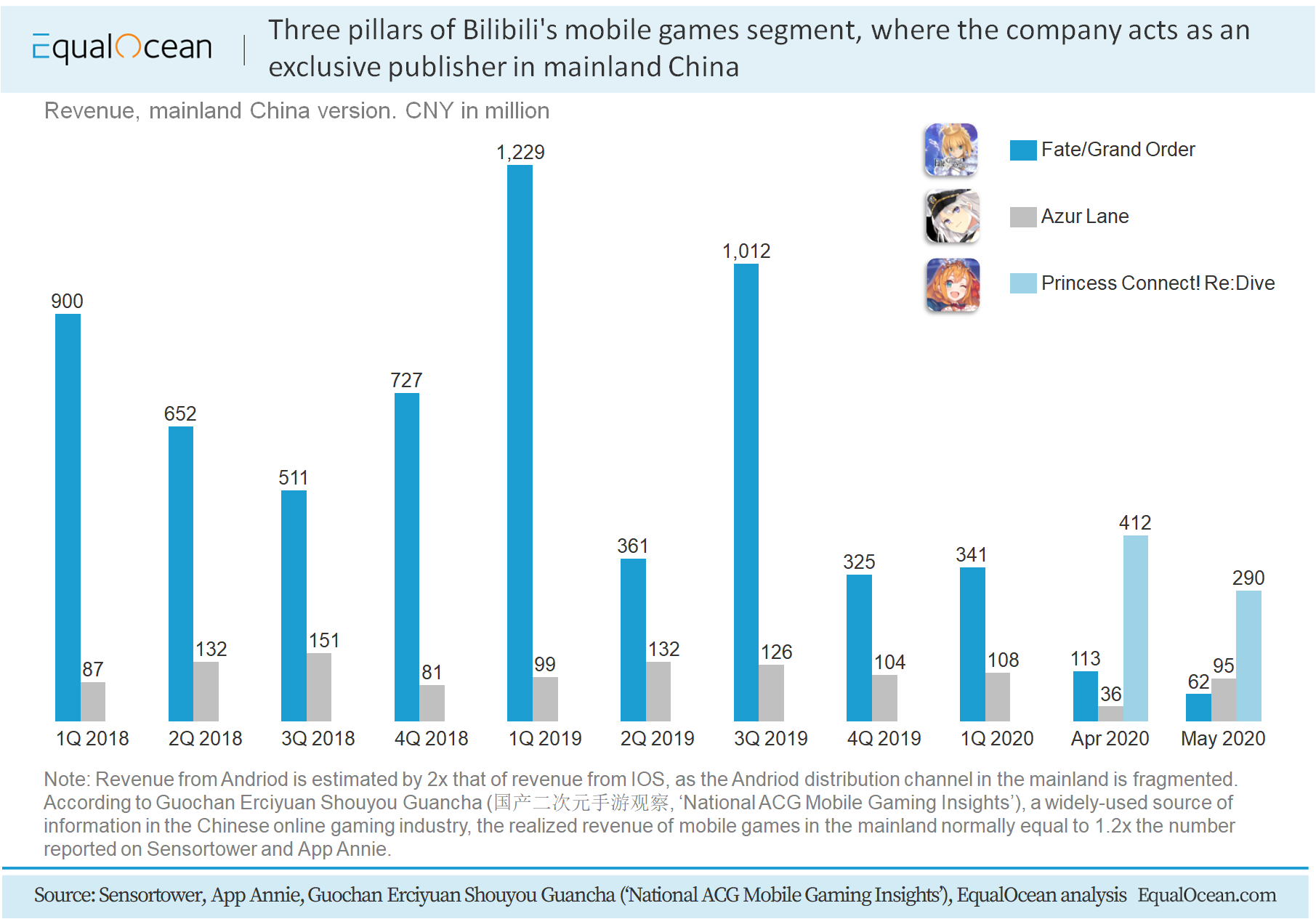 Fate/Grand Order is a Japanese RPG mobile game and a worldwide phenomenon, developed by Delightworks using Unity, and published by Aniplex (a subsidy of Sony). The game is based on Type-Moon's Fate series universe, which is one of the hottest IPs in the Japanese ACG area. The first commercialization creation of the collection was 'Fate/ Stay Night, ' a text adventure game published in 2004. Until now, the IP consists of 15 gaming projects and 23 animation projects, and 'Fate/Grand Order' is the most successful mobile game project amongst them.

Before it launched its mainland China server in 2016, Bilibili had already purchased the broadcasting rights of the two other classic animation series under the same IP, which were 'Fate/ Stay Night [Unlimited Blade Works]' (released in 2014-2015) and 'Fate/Zero' (released in 2011-2012). So, when the 'Fate/Grand Order' Chinese version began, there were already a lot of active fans of the Fate series on Bilibili's platform, which made the game quickly gain its initial user base. Besides, as 'Fate/Grand Order' became more and more popular, the number of derivative PUGC videos based on the game and the IP that was uploaded to Bilibili's video platform continuously increased, which again helped to attract more new users to play the game and sustain the initial ones. Apart from this, during the four years from 2016 to 2020, Bilibili continuously purchased the broadcast copyright for Fate series animations, where most of which were released after 2016. As the users of the ACG games generally care a lot about the storyline, this will – on the other way around – push some of the fresh users of 'Fate/Grand Order' to Bilibili's video platform to watch more animations that belong to the same IP.

Up to now, there have been 19 Fate series copyrighted animations available on Bilibili's video platform, 7 of which have accumulated more than 50 million views and more than 10 million bullet chats (a live commenting function that enables content viewers to send comments that fly across the screen like bullets). In a 24-hour span on June 21, 2020, there were 179 original PUG videos related to the Fate series submitted by individual users to Bilibili's platform. These numbers give us an opportunity to grasp why the Chinese server of 'Fate/Grand Order' can still generate such fruitful revenue even in its fourth year of operations.

The great synergy that Bilibili's video platform brings to its ACG game distribution and operation business can also be examined via the success of Azur Lane, which was created by Chinese developers Shanghai Manjuu and Xiamen Yongshi, released in 2017, and is exclusively distributed by Bilibili in the mainland. As of June 21, the official account of Azur Lane on Bilibili has 1.23 million followers. There have been more than 100,000 Azur Lane-related videos created and uploaded to Bilibili's platform, and 823 of them have accumulated more than 100,000 views. 78 live streamers on Bilibili specifically target Azur Lane related contents, and there were 20 of which in the middle of a live during 6pm June 22, 2020. This strong and suitable interactive environment that Bilibili's video platform provides to the ACG mobile games players largely increases the level of engagement of these people, which in turn helps to form higher user stickiness and elevate the life span of the game, contributing to the major competitive advantage of Bilibili's mobile gaming business.

Although China's gaming market as a whole is moving towards a rather mature stage, the ACG mobile gaming market, with only four years of development, is still in a very initial stage and is much smaller than the MOBA and MMO RPG gaming market – which are the major categories in the Chinese market. Also, it is still very hard to sketch the market size from the annual revenue of the top projects, as each year there are new star projects that came out and make the ACG mobile gaming category go through the roof as regards the projected market size.

However, also owing to the issue that the supply of good projects is currently far less than the demand, the bargaining power of top ACG game producers is continuously increasing, which gives Bilibili pressure to get the exclusive distribution contracts, as some of these content providers are more likely choose to sign a joint operation contract with the company – in which Bilibili can share much less revenue from the project compared to the former model.