How OneConnect leverages advanced technologies to seize a stream of business opportunities. 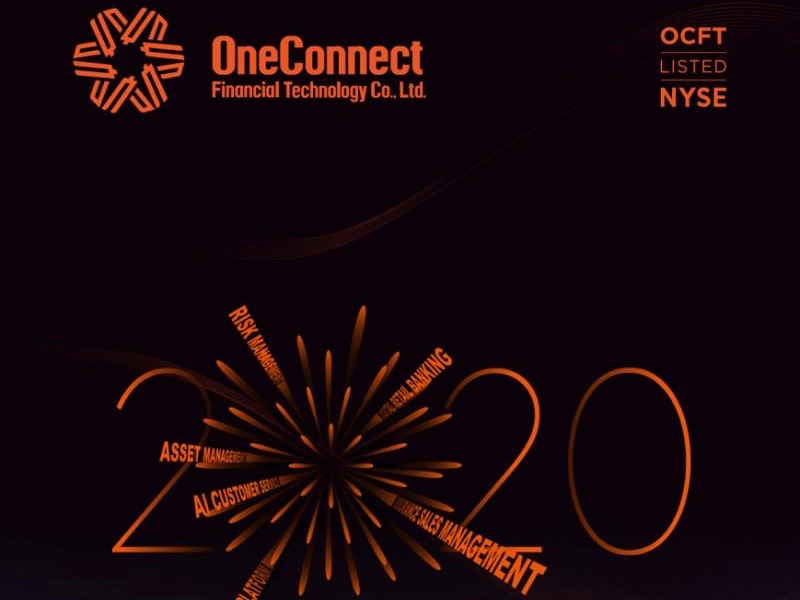 ► The countrywide digital transformation trend is poised to ignite the development of the entire fintech industry.
► OneConnect (check out our previous article about the company) has been performing rather well.

In the past decade, the financial service industry in China has been expanding at a historically high speed. The total assets of financial institutions have risen by 78%, from CNY 179.36 trillion in 2013 to CNY 318.69 trillion in 2019, according to the country’s central bank.

However, compared to the western world, China still has low financial service penetration. One example is the financial institution depth index, which is used to gauge the development level of the financial service industry, calculated as the total financial assets to the GDP. For China, the index posted 322% in 2019, while the US reported 481% in 2018 (most updated). There still exists a certain gap between China and the US, no matter from the household mortgage ratio, the insurance density per capita, the financing convenience for small and medium-sized businesses (SMBs) or the family asset allocation. Now, China is chasing the developed market within as many fields as possible. The financial service industry, which fintech companies like OneConnect (OCFT:NYSE), target, is expanding.

In this new era, financial institutions are actively funding technology, especially in China, which is struggling to close the gap between it and the level of the western market. The enthusiasm has led to more investments flowing into the fintech sector; the financing market remains at an active level. 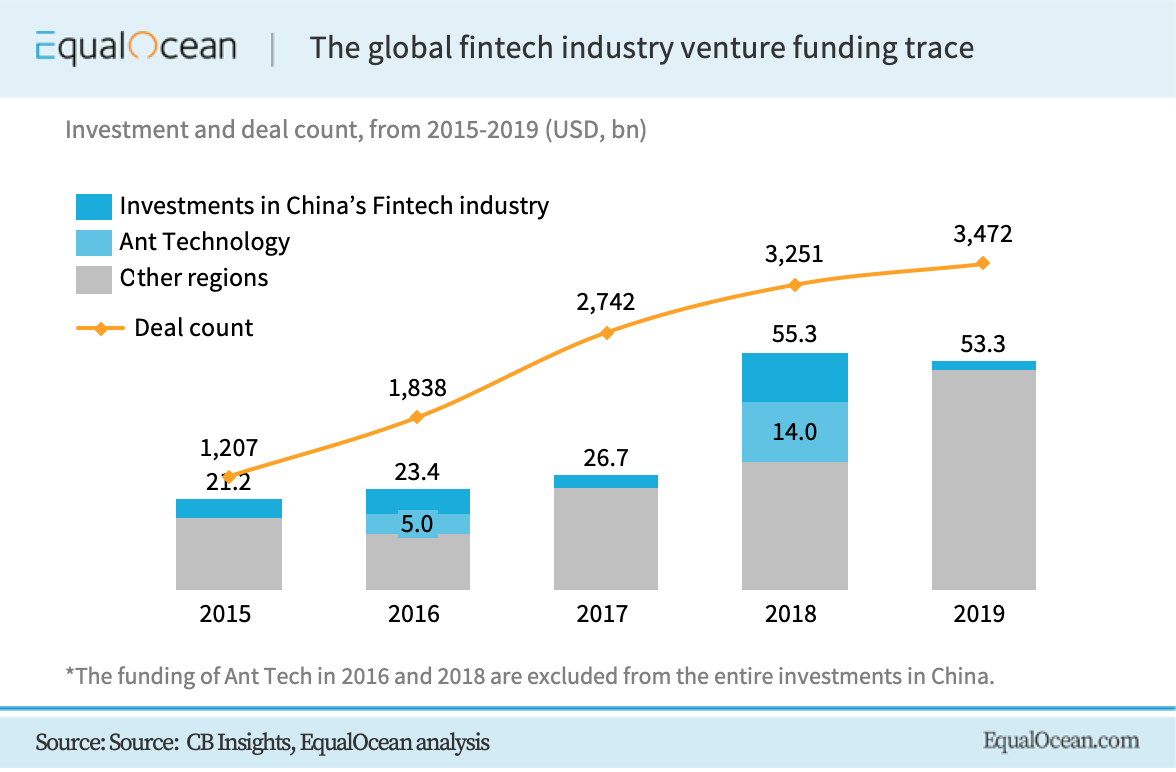 The financial service industry is competing beyond pure finance – also on the technology level. According to the forecasts by International Data Corporation (IDC), a global market intelligence provider, 40% of the banks in China will move their business to the cloud system, 35% of insurance companies will start using AI on their claiming processes comprehensively in 2020, 40% of the banks will start seeking fully-integrated technology solutions by 2024, and 25% of the banks will use quantum computing in the asset management field by 2025.

Also, the average technology expenditure level in the US is around 9% to 12%, significantly larger than the range of 2% to 4% in China now. For fintech companies such as OneConnect that offer tech-based financial solutions, it is reasonable to suppose that their time is coming.

However, it is not easy for Chinese financial institutions to achieve digitalization themselves. According to the China Banking and Insurance Regulatory Commission, there will be a large number of small to medium financial institutions filing bankruptcy or being acquired because of limited technology developing capacity.

In a research report published by the Internet Finance Association of Small- and Medium-sized Banks (supported by OneConnect and Accenture), small to medium banks in China form the main group that has the most urgent need for digital transformation, in order to increase competitiveness while operating with least capacity in technology applications. 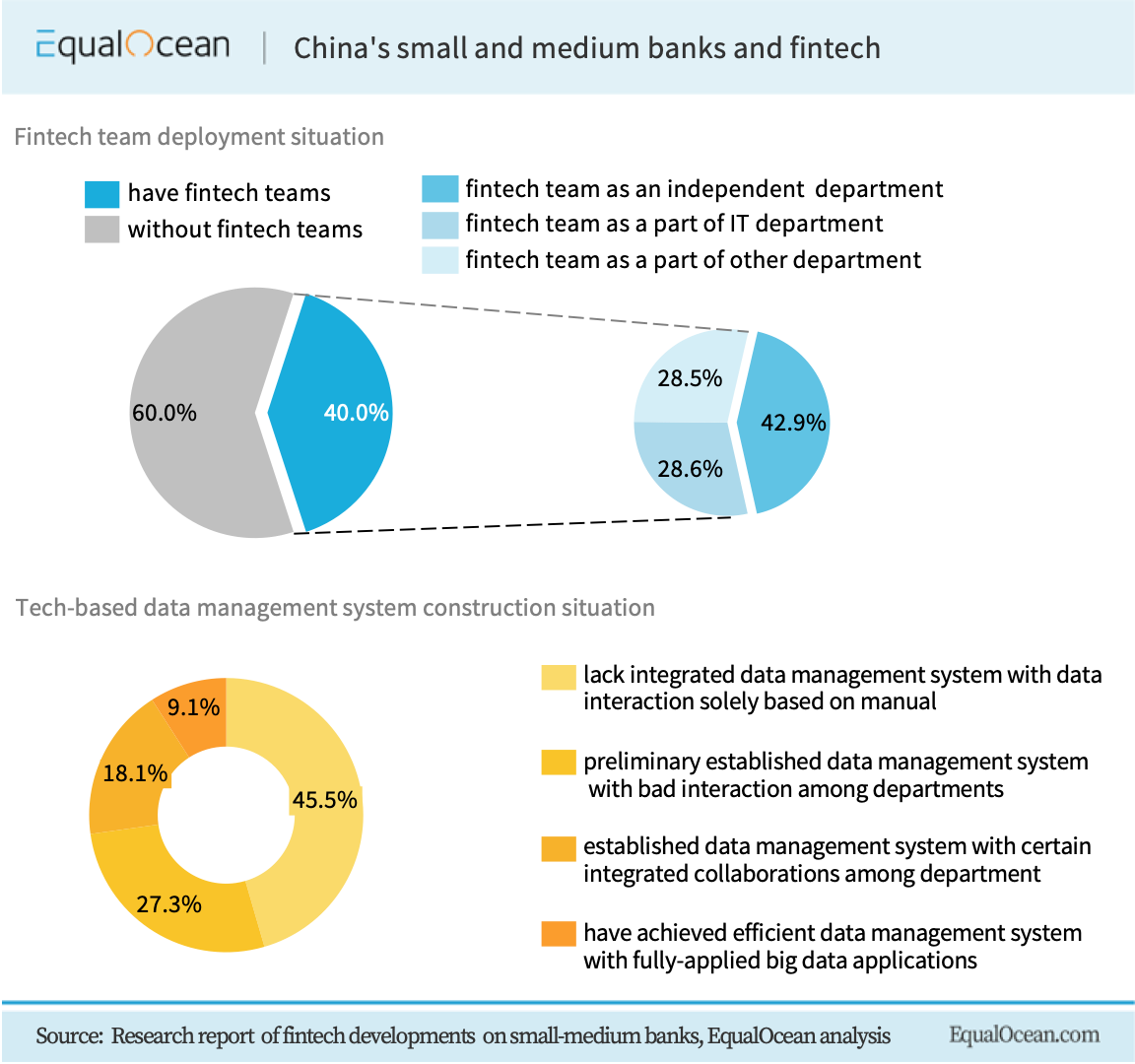 Actually, it is not only small banks – most financial institutions can't support themselves in matters of digital transformation. According to Oliver Wyman, the largest five ones globally by total assets have 15% to 20% technicians, while the range in China is 3% to 5% on average, with most of them lacking financial backgrounds.

In order not to be left out of the loop during a time of intense competition, financial institutions need some outside forces. This offers OneConnect more room to develop.

The pandemic in the first half of 2020 brought large difficulties to the entire economy. Financial institutions experienced tough times as well. Lockdown significantly decreased the business for financial institutions due to a lack of labor force, which also spurred the demands of digital transformation – this was when OneConnect quickly discovered an expanding field of opportunity.

AI client representatives, smart financial advisors, cloud-based data management solutions, and online business operation system construction were developed by OneConnect during the pandemic, to support their operations. This move was reflected in the revenue coming from operation support, which surged year-over-year by 170.7% in the second quarter of 2020, accounting for the largest part of the total income, and therefore pushing the revenue to rise 48.4%. 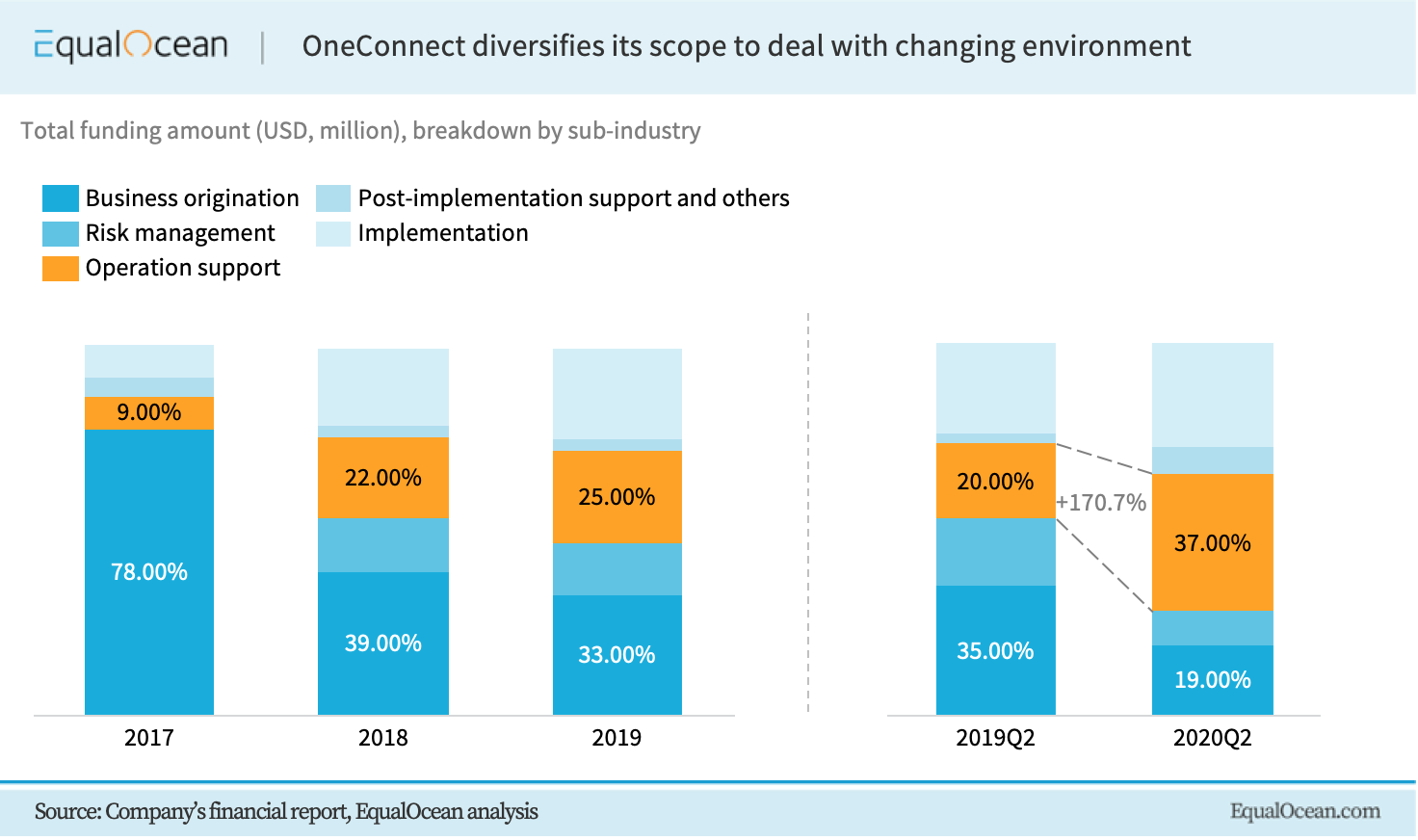 Now, OneConnect has become the technology cloud services platform with the largest client base in China. Looking back to the company's track on coping with the micros, it developed a clear business model around technology solutions and overseas deployments.

Clear technology strategies to keep itself on trend

Unlike some fintech companies that deploy business on a variety of technologies, OneConnect chose to focus on three core technologies: Blockchain, Big data, and AI, to provide comprehensive financial solutions that cover all major financial industries as well as the front, middle and back-office functions.

According to the Financial Technology Thoughts and Actions Report by OneConnect, since 2015, the off-counter rate in banks has increased from 77% to 88%, which means banks need to explore online business to reach more clients and better serve them. At present, the company has established the Gamma AI Research Lab and applied for more than 772 patents, and applied to many fields like digital marketing, robo-advisor, digital loan, and risk management models.

Based on IDC's forecast, the spending in the blockchain market in China will reach USD 1.7 billion in 2022 with the five-year CAGR over 80% from 2017. Of course, OneConnect has noticed. Since 2018, the company has been actively researching the blockchain, with applications landed on 14 business scenarios, such as asset-backed securities, blockchain finance, and reinsurance. It has designed, developed, and deployed a blockchain-based international trade finance platform for Hong Kong Monetary Authority in 2018, and participated in blockchain platform construction for Tianjin port in 2019, which represents the first blockchain-based cross border trade project in China. In 2020, the deployment sped up even more. OneConnect helped build a financing platform for SMBs in Guangdong, and blockchain networks to support trades and logistics for ports in the greater bay area of Guangdong, Hong Kong, and Macao.

As for big data analytics, the company has helped financial institutions on risk management, marketing, business data collaboration, and smart operation fields with over 10 solutions and products.

Some countries in Asia have been also speeding up recently in fintech deployments, especially for India, which exceeded China in fintech funding since late 2019, giving the sign of the large opportunities outside China. Also, large fintech companies in China seem to be more likely to survive and become stronger under this tense competition and transferring interests from investors.

OneConnect discovered the trend and aggressively expanded the overseas market. At present, it has businesses in 16 countries, such as Singapore, Indonesia, Thailand, Japan and Korea.

In sum, OneConnect has proven itself to be smart enough to grasp the ever-appearing opportunities in the industry, which pushed its market capitalization to the recent CNY 34 billion, ranking fourth in the best performing global ‘post-unicorn’ IPOs listed by Hurun report.