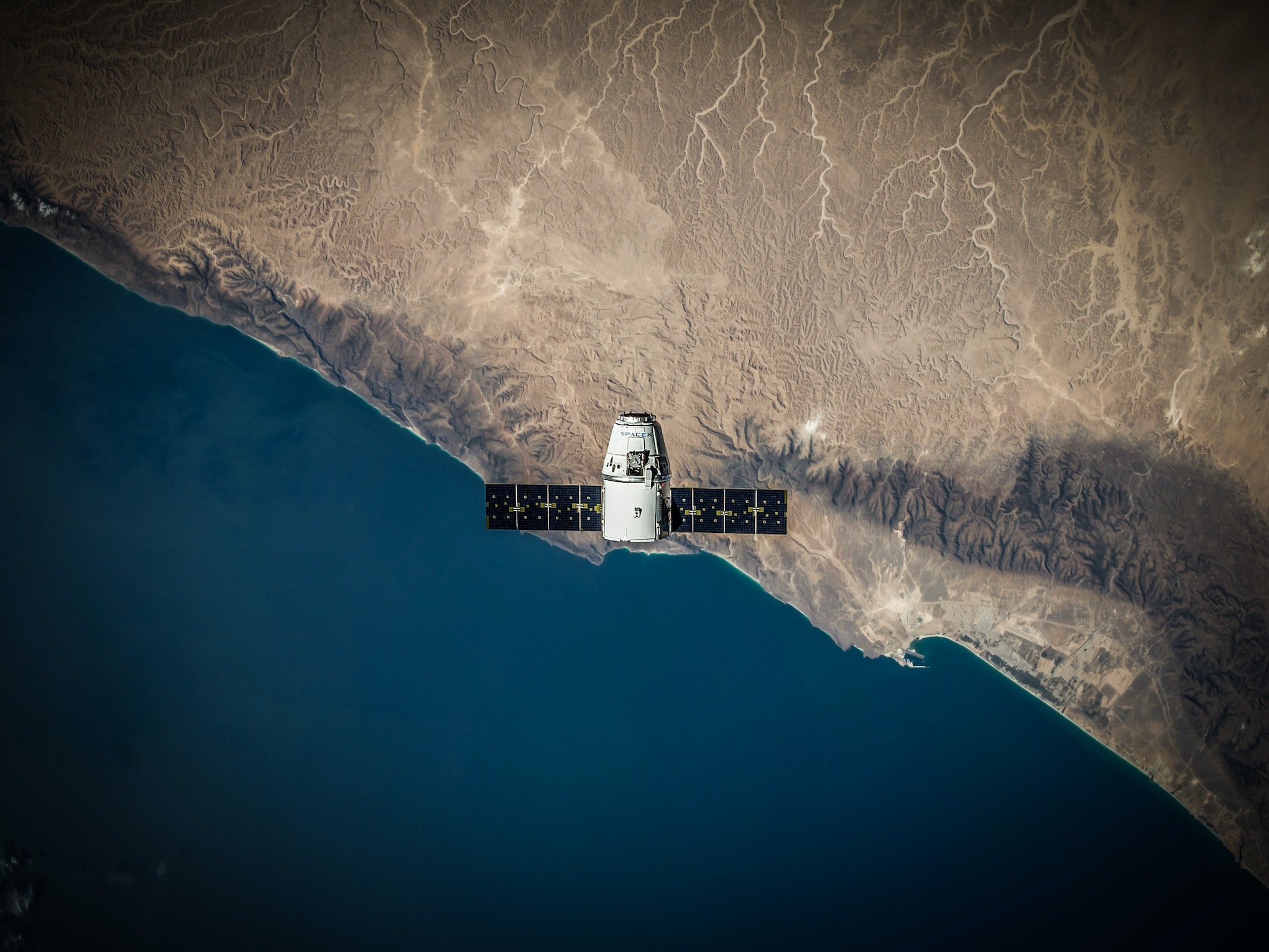 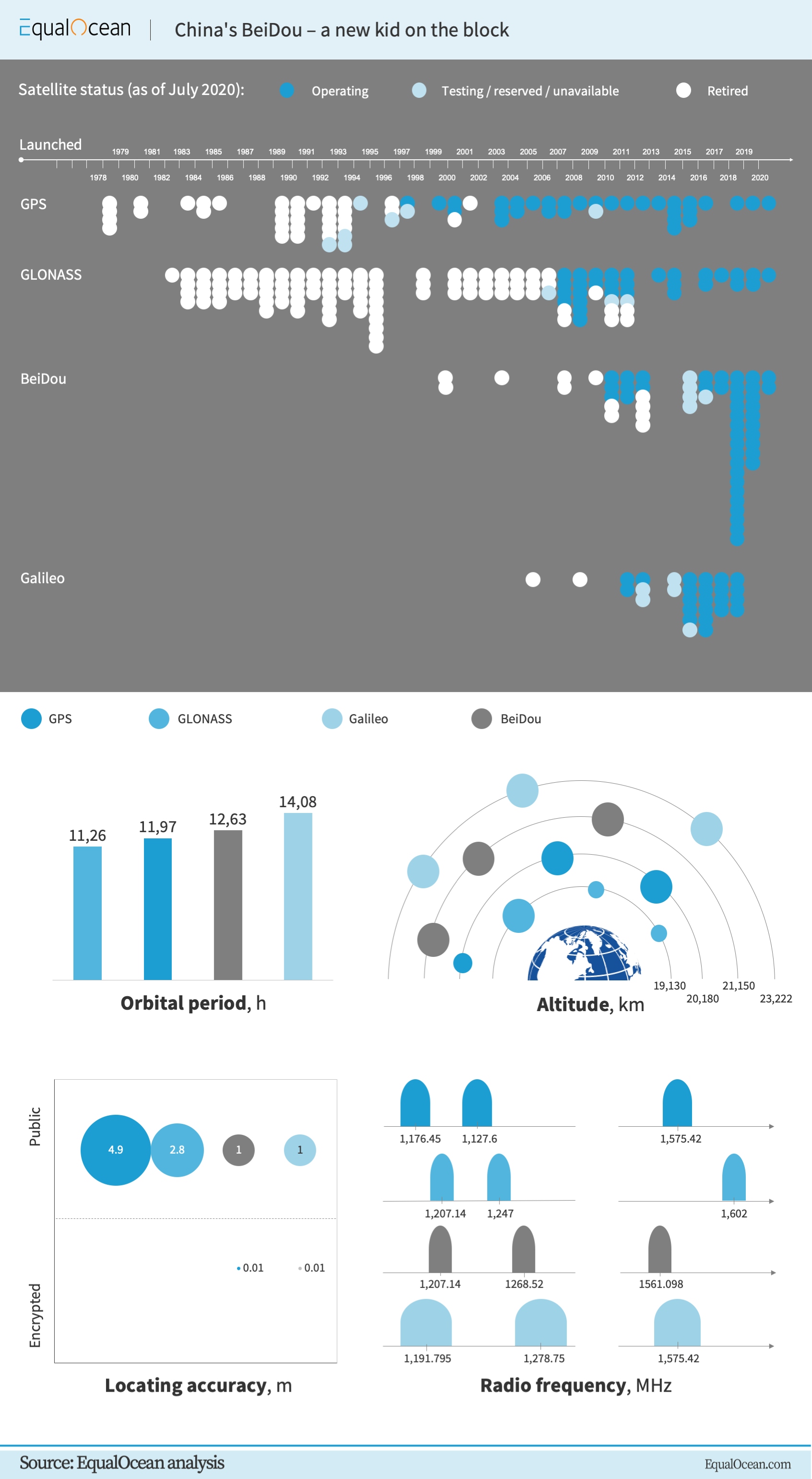 GPS was the earliest satellite system project, started by the US Department of Defense in 1973. The first prototype spacecraft was launched in 1978 and the full constellation became operational in 1993. The system offered global services from 1994. As the satellites wear out and technology advances, the US government constantly replace old satellites and modernize the GPS in order to satisfy higher demands.

GLONASS is the second navigational system with global coverage. The Soviet Union commenced its GLONASS project in 1976 and launched its first satellite in 1982. GLONASS has gone through three generations (GLONASS, GLONASS-M, GLONASS-K) and the third generation is not yet finished. Russia’s navigation system achieved full global coverage with 24 satellites in 1995. Restoration of the system was made in 2011 after a decline in capacity.

Similarly, China’s BeiDou experienced three phases of construction with the third phase fully deployed in July 2020. BeiDou started as the now-decommissioned BeiDou-1, with only three satellites, in 2000. The second phase, known also as COMPASS, became operational in 2012 with only 16 satellites, covering Asian-Pacific regions. Unlike GPS, which started working after being fully set, BeiDou’s staged strategy made early commercial use of the system accessible. Besides, experience gained in the second phase led scientists to make a better design for BeiDou-3. The third step of BeiDou was launched in 2015 with full global coverage, using a total of 35 satellites.

The last GNSS is Galileo. Though the conception was agreed by the European Union and the European Space Agency in early 2002 and the first experimental satellite GIOVE-A was launched in 2005, it was not until 2011 that the first operational satellites were put into the constellation. Galileo has been offering Early Operational Capacity in 2016 and the complete 30-satellite system is expected by the end of 2020.

For GNSS, altitude and period are positively correlated characteristics. Satellites in a higher altitude are in a larger orbit and thereby have a longer distance to travel for one round. Since the satellites may collide if different systems use orbits with the same height, the four GNSS keep a distance from each other. As outer space has no nationality, GPS, whose satellites were sent first, had the right to choose its altitude without fear of obstruction. In the end, Galileo’s satellites operate in the highest altitude orbits (23,222 km) with the longest period (14.08 hours) while GLONASS runs in the lowest altitude (19,130 km) with the shortest period (11.26 hours). GPS and BeiDou have altitudes at 20,180 km and 21,150 km with 11.97 hours and 12.63 hours period respectively.

GNSS systems using the same band of frequency may interfere with each other’s signals and thereby influence the usefulness of the whole system. Launched in the early years, GPS and GLONASS got the right to use the comparative width of frequency bands authorized by International Telecommunications Union (ITU). Unfortunately, when China’s BeiDou and European Union’s Galileo applied for frequency bands, four-fifth of bands for navigation satellites regulated by the ITU were already occupied. According to the principle ‘first come, first served,’ China launched three BeiDou satellites and started to use the frequencies in 2009. Galileo, which applied to use an overlapping band, hasn’t launched the scheduled experimental satellites and has thus lost the opportunity to compete. In the latest years, four GNSS companies are cooperating to pack all frequencies closely together so that one receiver can receive all these signals, but not too close that the signals interfere with each other. Compatibility and interoperability can be realized between multiple GNSSs without disturbing any system’s individual work, as well as enhance the accuracy of locating and timing without elevating the cost of using receivers. Now, many mobile phones – such as Xiaomi 4, Huawei G7 and Samsung S5 – have chips that are compatible with navigation signals from at least three GNSS.

Location accuracy depends on factors such as atmospheric conditions, signal blockage and receiver quality. BeiDou upgraded its performance after the completion of its third phase, reaching accuracy at 1 m for public use and 1 cm for encrypted military use. Similarly, the much-anticipated Galileo, which is expected to be settled this year, will be as accurate as BeiDou. GLONASS now achieves an accuracy of 2.8 m. To improve GLONASS’s ground segment, positioning ground stations are under construction in Russia, Antarctic, Brazil and Indonesia. Those infrastructures are expected to lower GLONASS’s accuracy down to 0.6m or better by 2020. GPS-enabled mobile phones are normally accurate at 4.9 m under the open sky. Using dual-frequency and/or augmentation, DGPS coupled with CPGPS eliminates error source, realizing absolute accuracy at 20-30 cm.

In the beginning, GPS was designed to have six orbits with four satellites running in each orbit. In June 2011, the US Air Force completed a constellation expansion, expanding three of the 24 slots. As of May 2020, 31 operational satellites are in GPS constellation without decommissioned, on-orbits spares. By August 2020, GLONASS has total 27 satellites in orbit, 23 of which are operational. The other two are spares, one in maintenance and one in flight testing. BeiDou-3 completed its deployment after the 35th satellite was launched in June 2020. Therefore, a total of 35 satellites are operational in the BeiDou system. After Galileo is fully set, the system will have 24 operational satellites and 6 spares. Spares improve the precision of navigation receiver calculations by providing measures. Commonly, accuracy increases as more satellites launched to the system, but the number of satellites is not the only factor that matters. Systems with high orbits need more satellites than systems with low orbits to reach comparable locating accuracy. The position of satellites and signal obstructions such as buildings and trees all affect the navigation information the devices receive.

BeiDou is a two-way communication system, which is different from the other three GNSSs. This characteristic is useful for fishing boats, buses, field staff and rescuers that wish to send messages and inform of their locations. People trapped in a mountain without a cellphone signal can send a message of up to 1,200 Chinese characters to a BeiDou satellite to get rescued. In comparison, GPS, GLONASS and Galileo only send signals from satellites to receivers and thereby have no idea of who and where the receivers are. Though this particular function provides convenience in some cases, it is considered a flaw by some people. As well as the intrinsic disadvantage that two-way transmission compromises accuracy and takes up wider bandwidth, it raises security concerns. Taiwan’s Ministry of Science and Technology, for example, recommended that national defense agencies monitor signals transmitted by BeiDou as it may track users by deploying malware on BeiDou-enabled chip and transmit information through navigation signals or messaging function.

CONTACT US
Scan QR code to contact us for professional consulting services
Next article
A Glance at Jack Ma's Ant Group's IPO Prospectus: a Giant Is Indeed a Giant