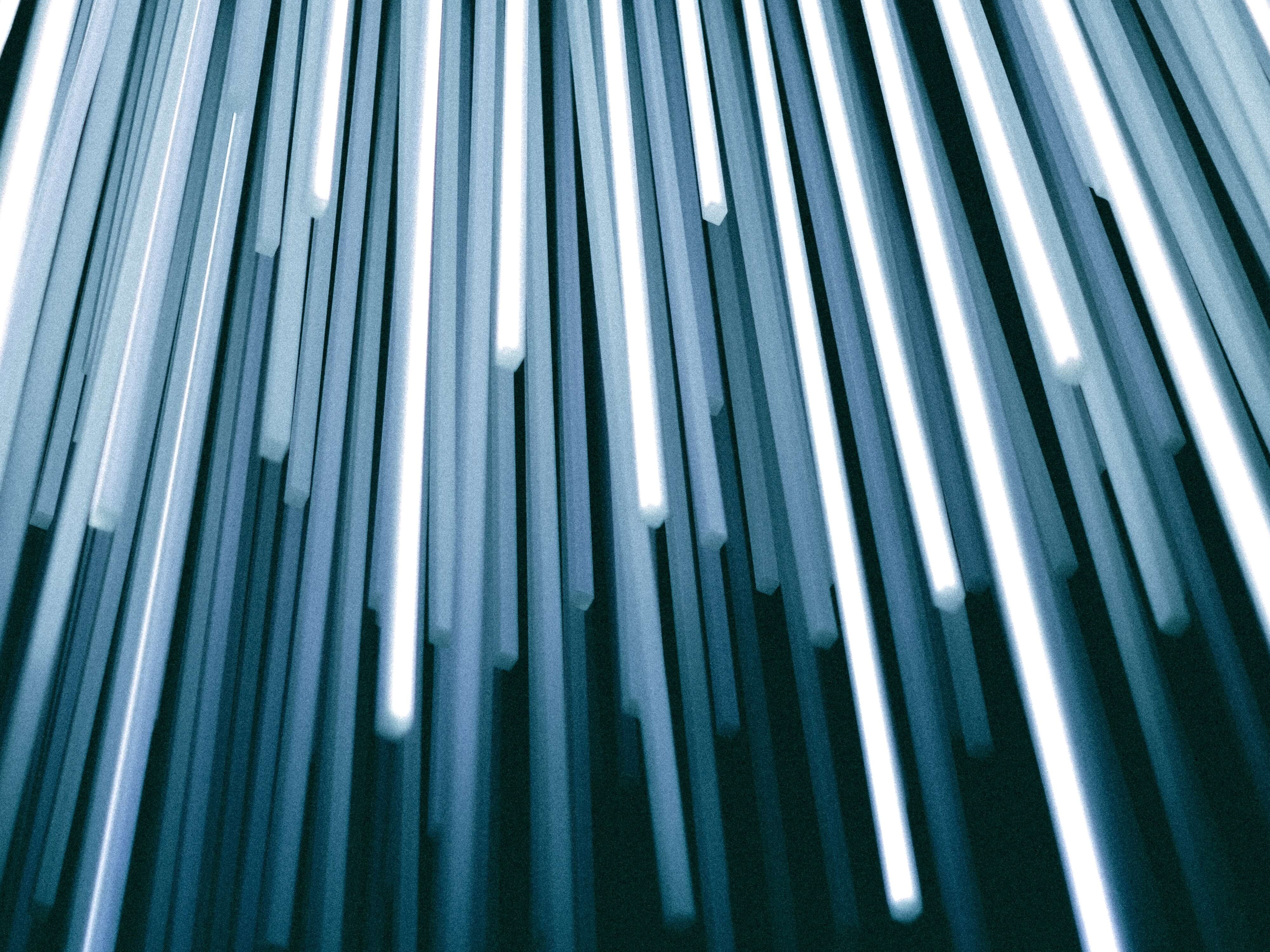 ► GDS Holdings' stock didn't skyrocket much compared to its competitors', but it has the most excellent fundamentals, meaning the greatest potential to go up and suffer less impact from a possible market correction.

► The company has an experienced management team that has been deploying a clear business model, being narrowly concentrated on hosting services, which perform better.

► We expect GDS to continue showing an outstanding performance from the best of ability to operating, well-located data centers and other indicators.

► Having observed Equinix's (EQIX:NASDAQ) ex-post revenue growth, the margins' behavior, Capex and Utilization rate, we consider GDS a possible candidate for transformation into China's analogue of the American company.

The share performance on the last twelve months was primarily correlated with the market swing. The global market plummeted due to the coronavirus pandemic, then, as China rolled out its 'New infrastructure' scheme and economic activities began to resume, China's A-shares bounced back from their March low. 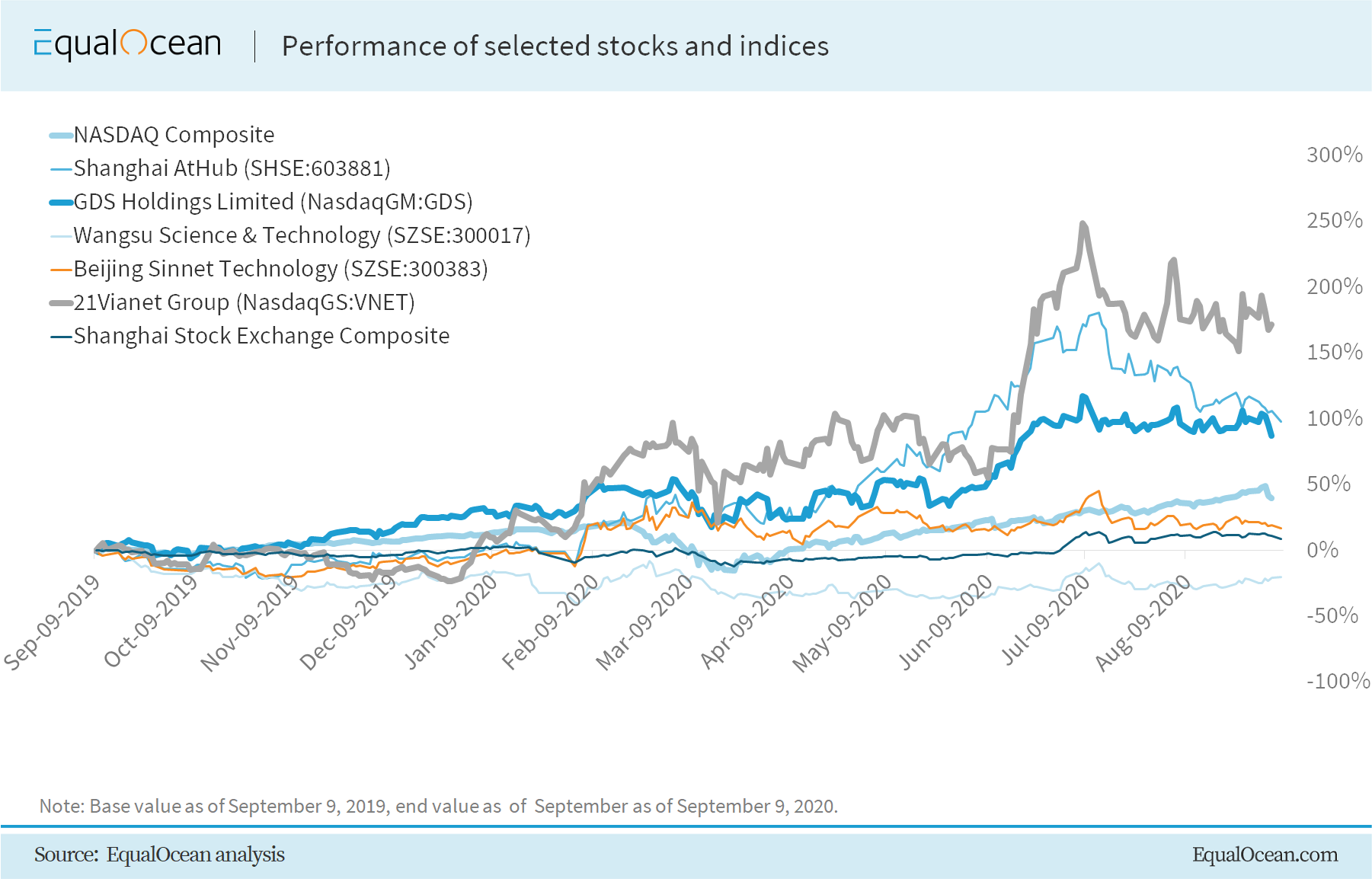 Currently, the market is in a stage of shaking, high volatility. Compared with VNET, GDS is having a less volatile year to date. Below, we explain why, as well as dig into the data center provider’s fundamentals.

Currently, the company is controlled by the founder Wei (William) Huang. Another principal shareholder specializing in datacenter investment, STT GDC, was a major shareholder of Equinix from 2003 to 2005. STT GDC has affluent investment experience in the datacenter. Besides, Hillhouse Capital, a long-term value-focused investor, recently also became a strategic shareholder of the company, acquiring 3.9% of its shares and becoming its third-largest shareholder.

Unlike its main competitors who are paying less attention to the data center field (21Vianet Group, Baosight Software and Sinnet received 70%, 30% and 30% revenue from the Internet data center business in 2019), GDS has been focusing on colocation for thirteen years.

It is common to believe that a diversified product line is better than a single business model, but that's not the case in the data center industry. The sector seems not to need multiple revenue streams to create more value from things like the synergy effect. The modern business model requires the company to focus on its core business, especially for complicated projects like IT operations; therefore, business outsourcing is getting more prevalent.

US industry has proven this – it underwent an integration period when many data center businesses spun off from large telecommunications companies. And this is also happening in China right now: Chindata separated from Wangsu Technology in 2018 and is currently applying for a Nasdaq IPO. Dr. Peng, the most significant private broadband operator in China, is also giving up the broadband business and focusing on data center services.

Currently, GDS presents a much higher Adj-EBITDA margin than its Chinese peers with 47.2% in the second quarter of 2020, reflecting better operation efficiency. Separately, compared with its competitors' performance, GDS has 3x cabinet space and eclipses competitors in many dimensions: data-center size, utilization rate, growth and cost control. 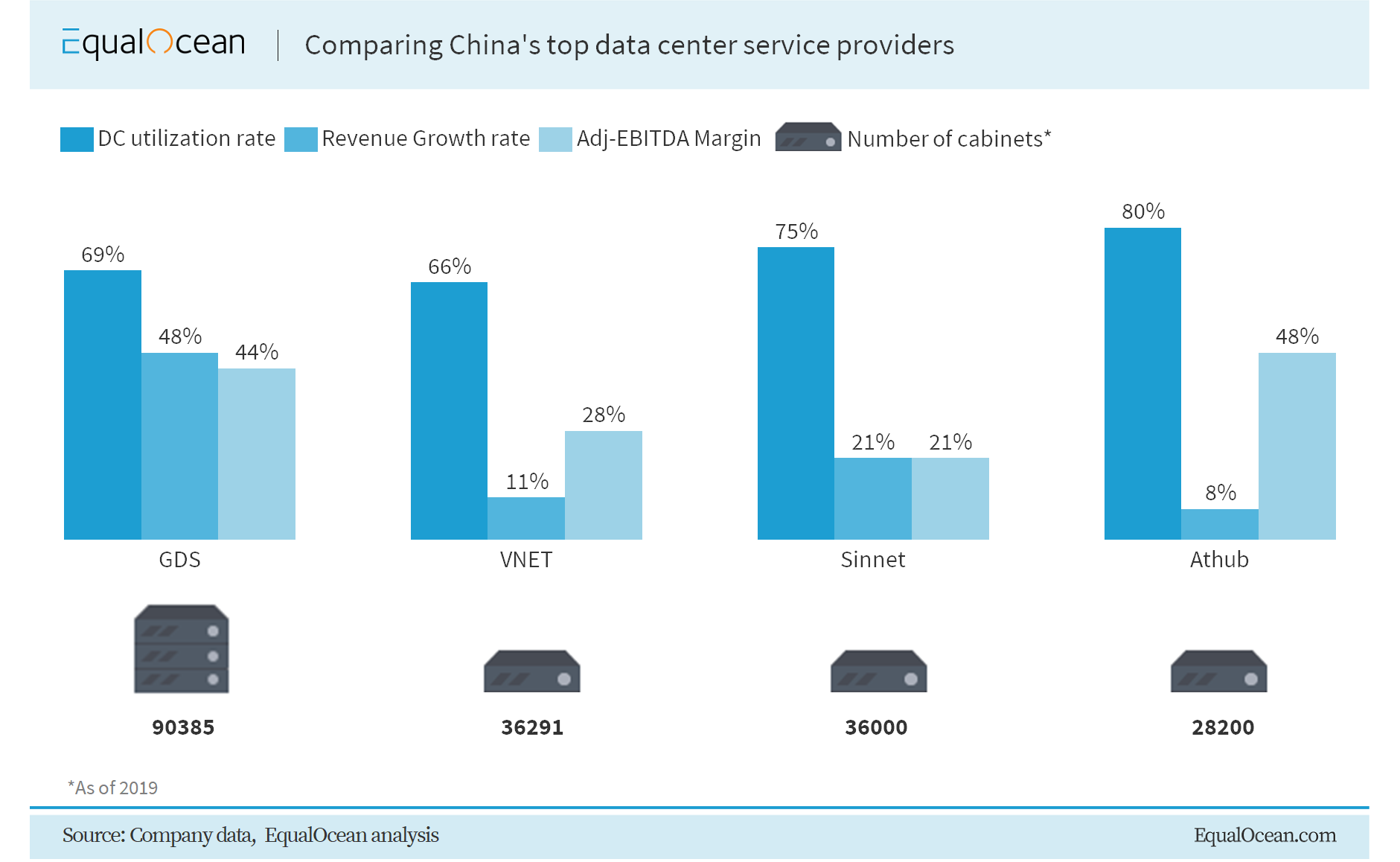 Viewed from a single company alone, GDS reinforces its position by lowering SG&A and other costs. 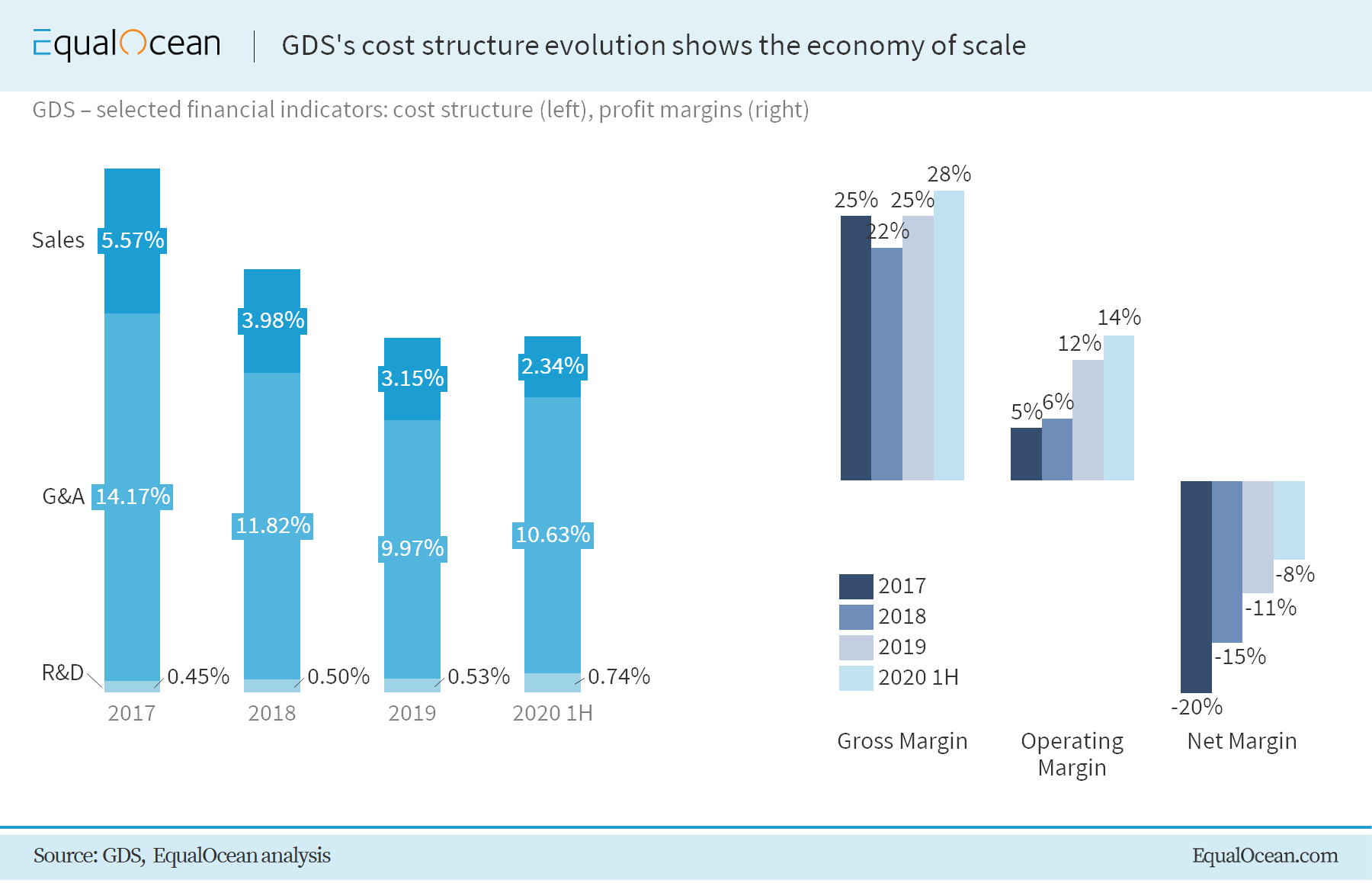 Where are the industry needs and what is GDS's presence?

The data center sector has never been so prosperous since the new infrastructure plan was rolled out. Recently, another hyper-scale data center, Chindata, which mainly services ByteDance, is preparing to go public. The whole industry expects vast long-term needs for data storage.

Even though the majority of data centers are located in tier-one city areas, there are still no trade-offs between demand and supply in core economic areas. According to the Shanghai Municipal Commission of Economy and Information (SHEITC), for September 2019 (link in Chinese), the average utilization rate of data centers in China was 52.8%. The figures for Beijing, Guangzhou and Shenzhen were around 70%, Shanghai's model was close to 80%.

Besides, the government of tier-one cities has strict requirements like cabinet volume (less than 3,000), while PUE (Power usage effectiveness) has to be lower than 1.3-1.4 varies from cities, which the country benchmark is around 1.8-2.0. Recently projects that passed were mainly to serve Alibaba, Tencent and Huawei. These companies usually have enormous needs for computing and storage.

We believe GDS has an excellent competitive position as it teams up with large Internet traffic owners like Alibaba Cloud. Unlike the United States' data center market, retail-data center stocks perform better than wholesale ones. China's data center landscape proved whole data centers are cooperating with cloud players' performances better. They can ramp up the utilization rate quicker. For GDS, the company generated 73%, 14% and 13% revenue from cloud service providers, Internet companies and financial institutions, respectively.

Some indicators show GDS is on the way toward expanding:

How it is shaping itself into China's 'Equinix'

Last but not least, even GDS has already become the third valuable data center brand around the world. It still has a long way to go to chase after global leading names like Equinix. Comparing these two companies, when we rewind the history of EQIX, we find GDS shares similar 'features' with Equinix as it was 10 to 15 years ago. For example, fast revenue growth, improved operating margin, massive Capex and improved UR. 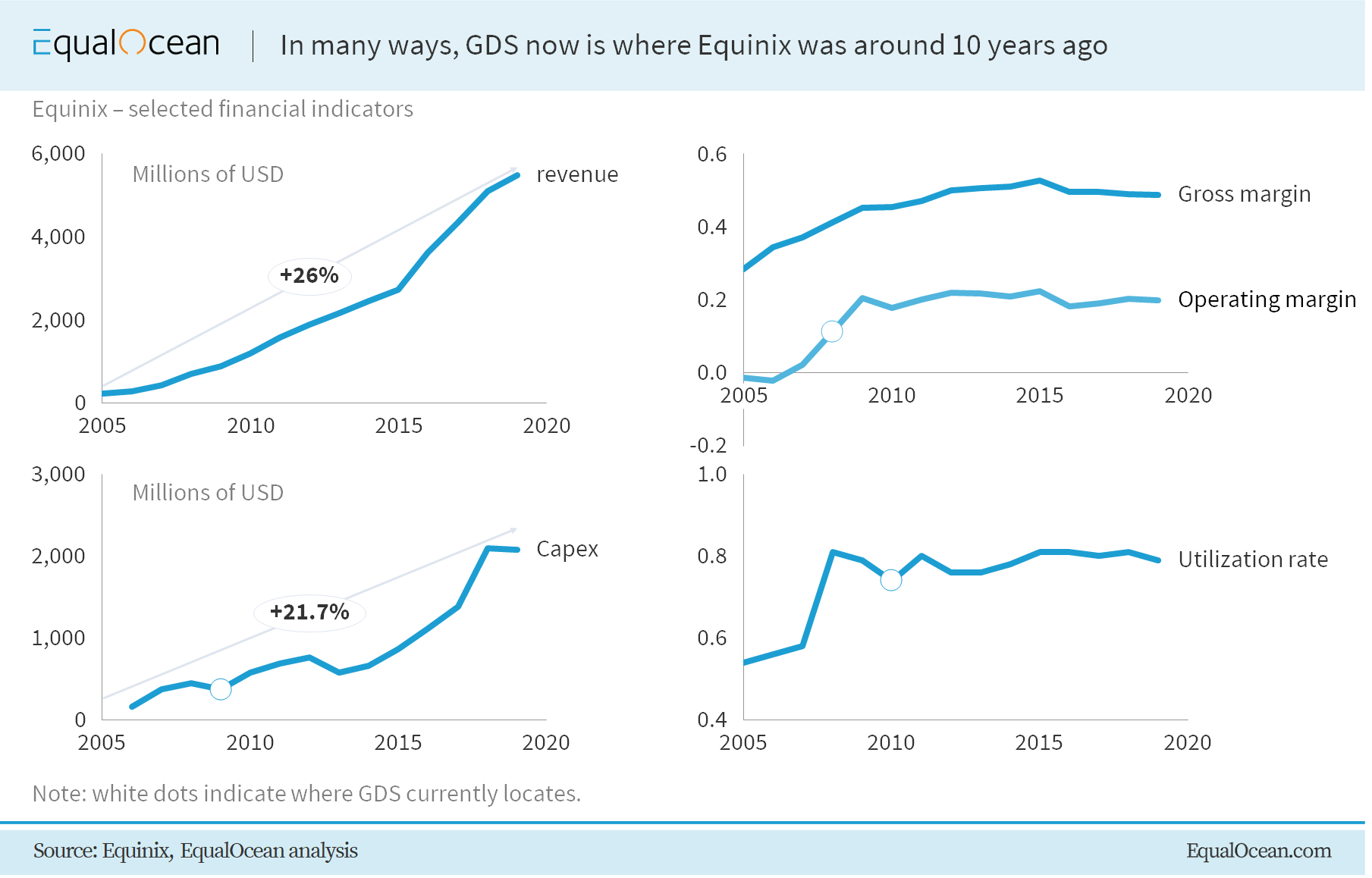 Thus, we can see there is enormous space for the company to stretch, as EQIX did in the past. Last but not least, we may note that China is trailing its public REITs (Real Estate Investment Trust) which incorporates IDC projects. This is another exciting catalyst.