The television has been evolving towards larger displays, higher definitions and some luxury features. Besides the technologies, the product positioning of TV has also changed with the inception of the 'connected world' and 'smart home'. 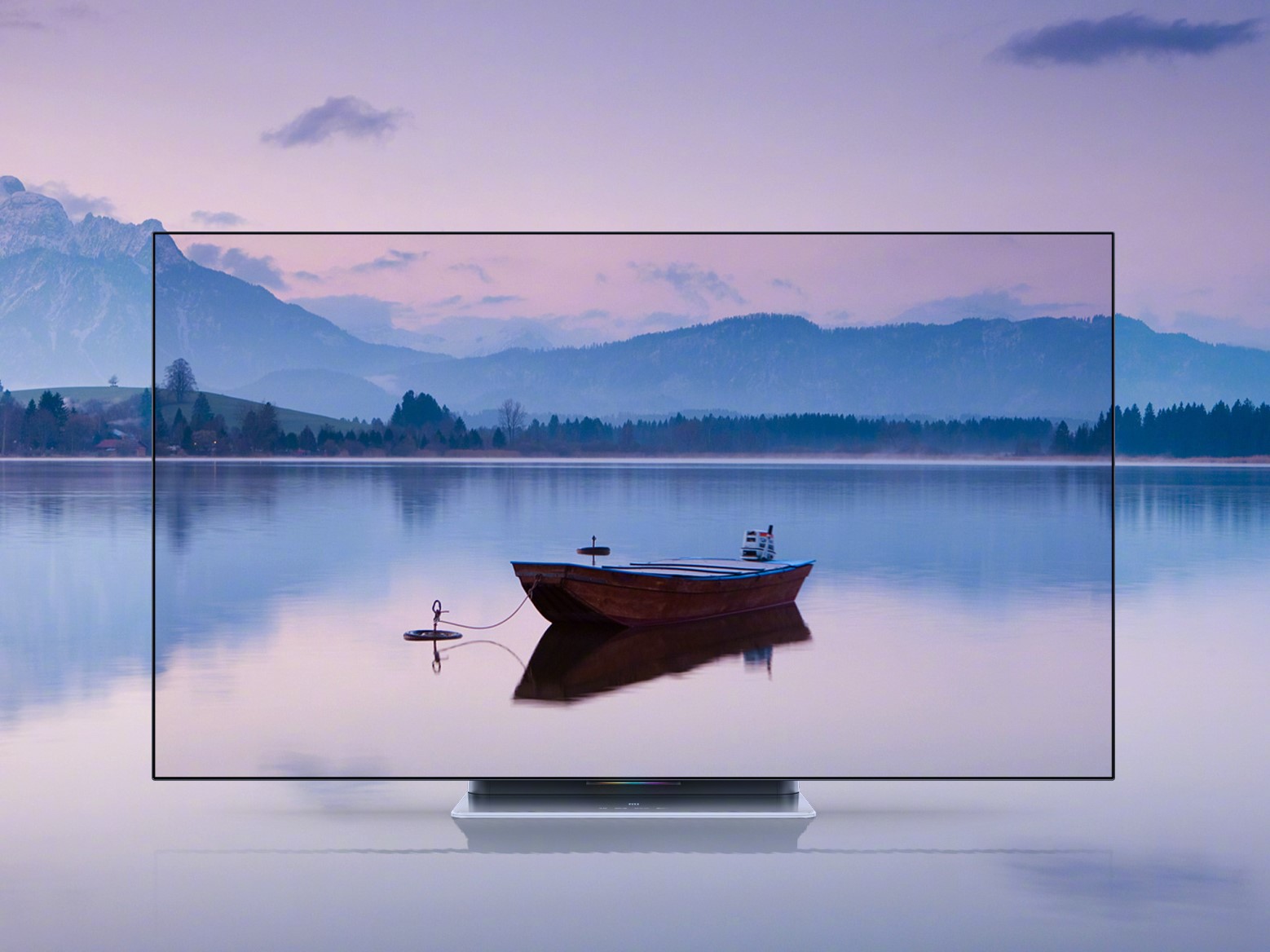 ► Smartphone vendors, such as Huawei and Xiaomi, consider TVs as control centers in their smart home ecosystems.
► Xiaomi TV, as the current market leader in China, is expected to drive the revenue of other IoT products and the TV Internet services.
► The relatively large overseas customer base of Xiaomi makes it the fifth TV shipper globally with its current prevalence in India and the strategic focus in Europe.
► Huawei's TV products are strongly bonded to its 'smart home' and 'mobile office' application scenarios; however, the well-positioned TV products still need time to gain user recognition.
► OPPO has also started to build its IoT products through earbuds, smart wearables and the upcoming TV products.
► OnePlus and realme have chosen the Indian market as a start point to promote their smart TV products, where OnePlus focuses more on the high-end and realme sticks to its young and innovatively affordable product positioning.

As discussed in the previous article, the Chinese TV industry is embracing growth space squeezed by the transition from cable TVs to Internet connected ones. The appearance and functions are also evolving to the next stage. With the better capacity of content presenting and interaction with users, the new entrants, exemplified by smartphone vendors Huawei and Xiaomi (01810:HK), in the TV industry, are attaching more meanings to their TV products for better market positioning and cracking the big brand advantage of traditional TV brands such as Skyworth (000810:SZ) and Hisense (000921:SZ). The following will touch upon the TV strategies of 'newcomers' of the Chinese TV industry, namely Xiaomi, Huawei, OPPO-affiliated companies who actually revitalized the declining market.

Xiaomi TV – Beyond TV: Planning big for the IoT and Internet services

Xiaomi, the smartphone vendor who markets itself as a software and IoT company, considers the TV product as a crucial portal to the all-connected and smartly controlled home appliances blueprint made by the company in 2017.

The reason for the electronics leaders like Xiaomi and Huawei choosing TV products as their IoT strategy focus is that televisions could function as an interface portal, or a command center at home, with their embedded display features and some ready-to-be-added complex input functions such as operating systems and speech recognitions. Besides, as mentioned in the first part of our TV series, the replacement period of TVs can be as long as ten years, which the user stickiness is inherent. And if the Xiaomi TV, which could control other appliances and be connected to other appliances with a shorter replacement cycle, is dominating in users' homes, it will reasonably increase the sales of other Xiaomi smart home products such as air conditioners and acoustic equipment. 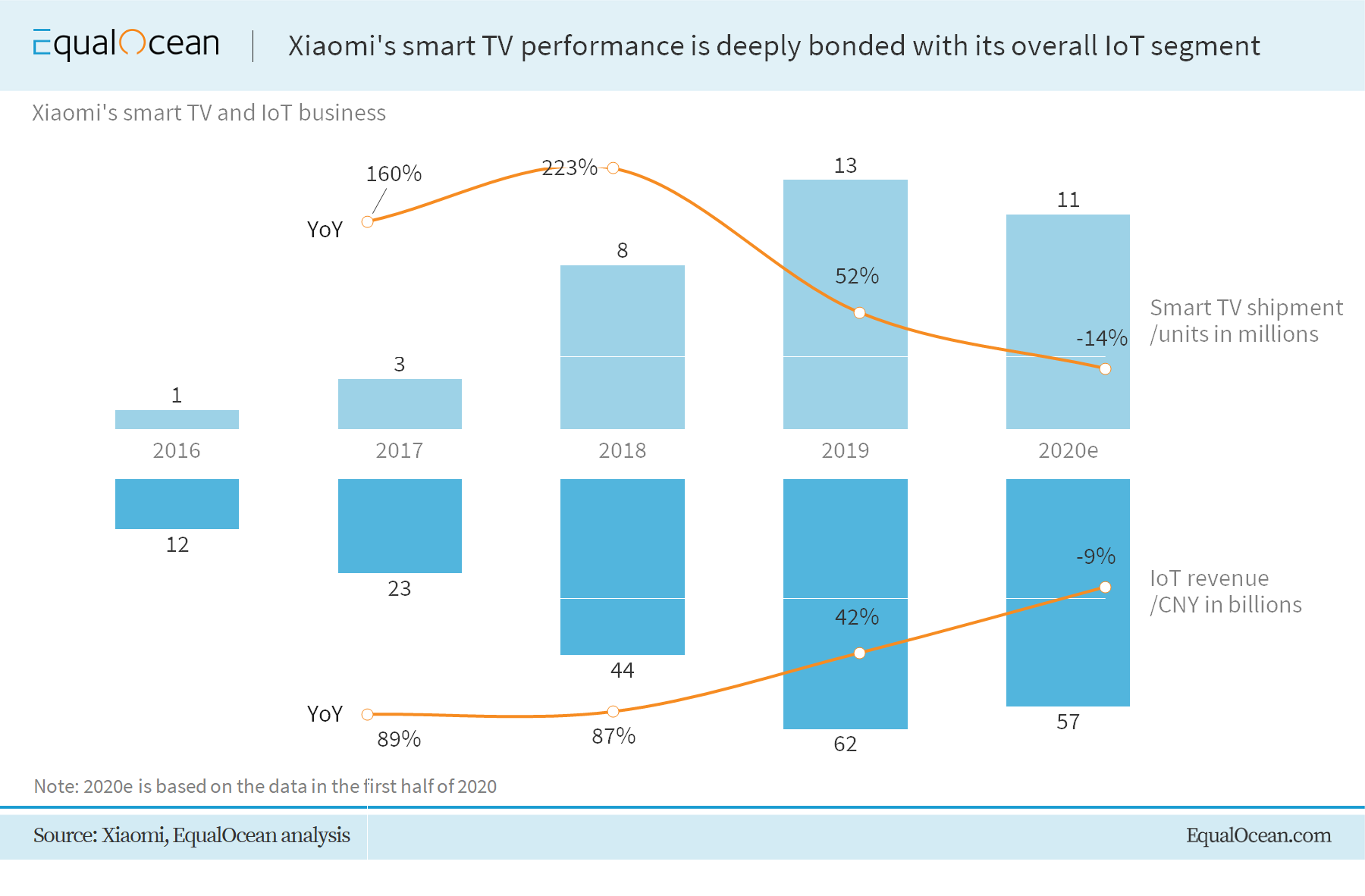 Except for the IoT planning, Xiaomi also intends to drive the Internet services revenue through the TV sales, as the Internet service such as the content subscription, TV applications and advertisement revenues. The revenue from Internet service enjoys higher profit margin and better sustainability, thus Xiaomi emphasizes on this part of revenue. Besides, it is likely that the quick movers could possibly enjoy a larger market in the future when it gains popularity, since the TV-based software ecosystem, which includes the operating system and the applications related, is hardly catching up with the rapid development of the 5G technology and the corresponding display industry upgrade. 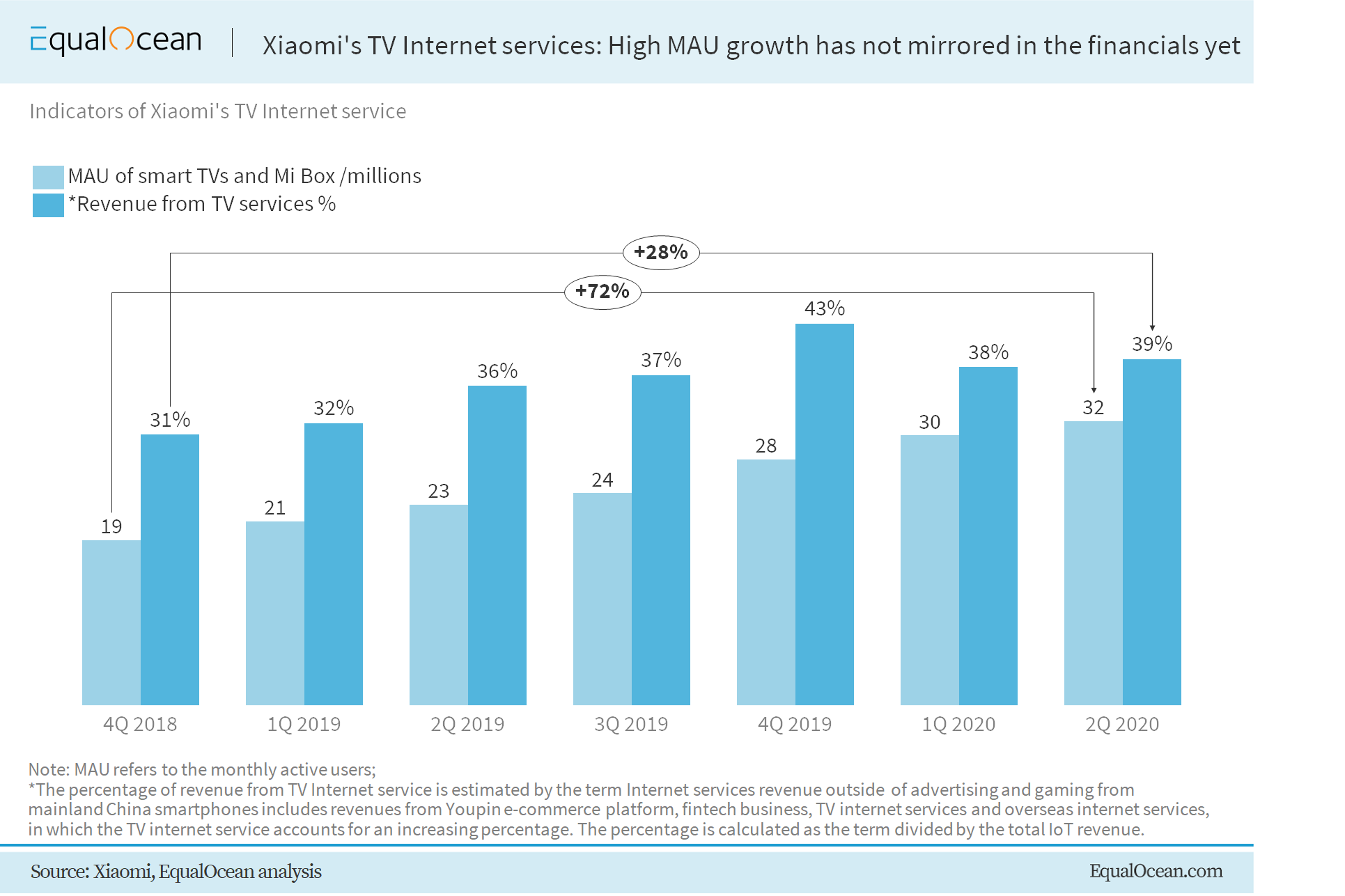 Partly as a duplicate of the company's smartphones, the TV products also aim for the overseas markets, especially the Indian and the European. The company first entered the Indian smart TV market in 2018 with its high-end 55'' TV with the lowest price of the same size in the market at that time. One year after its landing in India in 2019, the Xiaomi TV replaced LG Electronics (066570:KR), becoming the second largest vendor in terms of LCD TV shipments.

Following the development path of the smartphones, the company also envisions its TV products to be listed on the world's tops. According to AVC, as of the second quarter of 2020, the company ranked in the top five globally in terms of smart TV shipments. 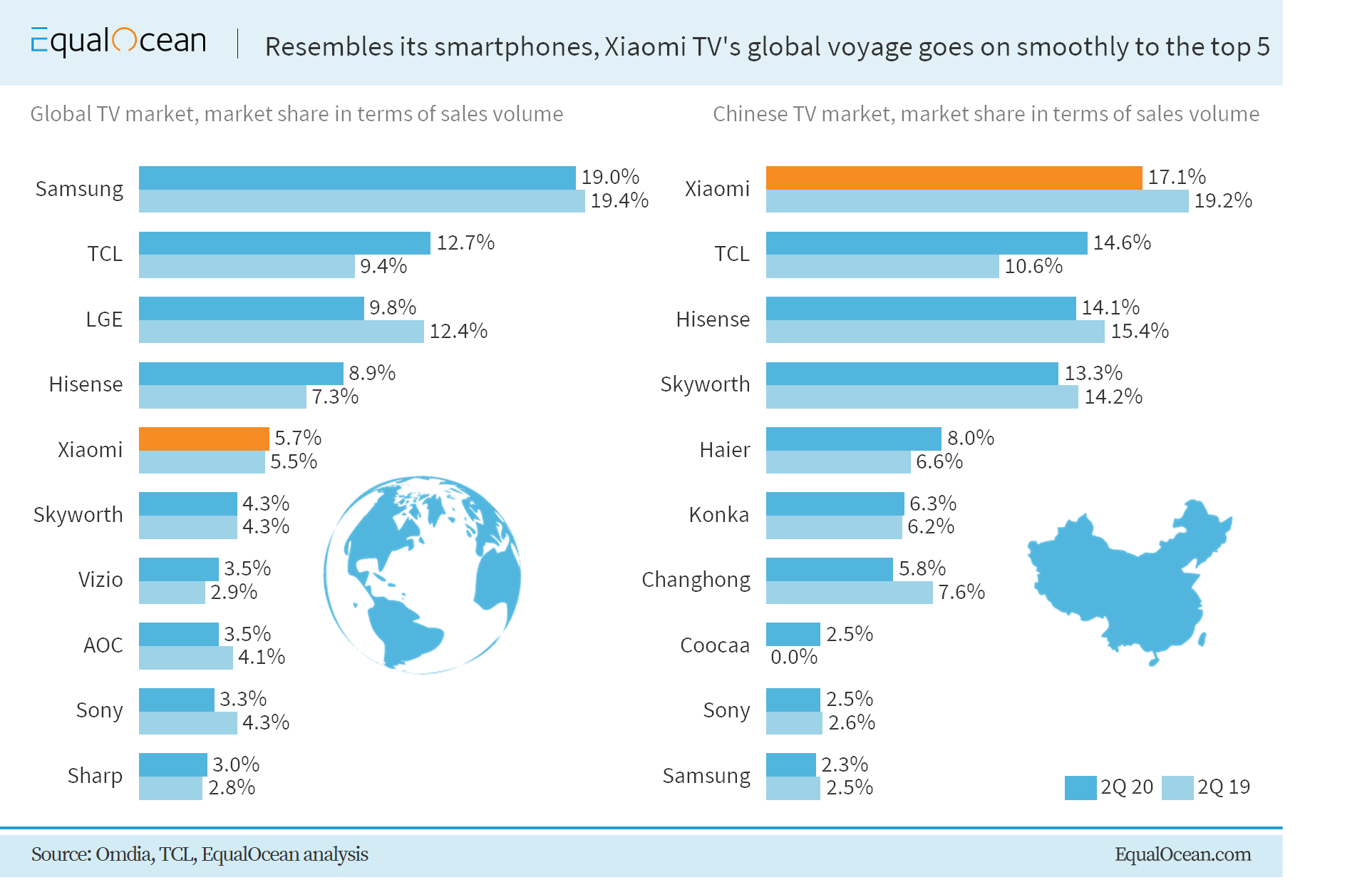 Apart from the actual shipments and the revenue generated, Xiaomi's TV products also serve a marketing purpose. Having long struggled with the brand image of low price and low quality, Xiaomi intends to enhance its brand image of 'cool products' and 'cutting-edge technologies' through TV innovations. In August 2020, the company launched the world's first mass-produced transparent TV – Mi TV LUX Transparent Edition – priced at approximately USD 7,000. The ultra-high-end TV with either screen quality innovations or the screen size enlargement up to 98 inches efficiently featured the 'Xiaomi' brand as highly innovative without interfering with the sales of its low-end and cost-efficient products.

Huawei:  What's the next after its possible smartphone setback?

In May 2019, the US government put Huawei and 70 affiliates in the US trade blacklist, which resulted in a key components supply shortage for its smartphones. One month later, at the Mobile World Conference (MWC), Huawei refreshed its mobile strategy to '1+8+N,' in which 1 refers to smartphones, 8 represents business lines of PC, tablets, TV, speakers, glasses, watches, autos and hearables, and 'N' indicates the unspecified products covering mobile office, smart home, fitness and health, media entertainment and smart travel.

Though the smartphone accounts for the largest part of its consumer business (54% of its total revenue in 2019), Huawei by the '1+8+N' strategy showed its backups for the sanctioned smartphone segment, which is more or less in line with Xiaomi's IoT strategies. Thus, Huawei also attaches importance to its TV products. In August 2019, the company released its first TV products Honor Smart Screen in 55'' and 65'', which were installed with the company's Android substitute operating system HarmonyOS. Besides, Huawei's smart screen series are equipped with pop-up cameras. The two features mentioned turned Huawei's TV products into a huge 'smartphone' which could satisfy two biggest needs – video calls and content browsing.

Currently the prices of Huawei TVs range from CNY 2,000 to 10,000 and the products are well-positioned both in smart home and mobile office scenarios. However, even with its strong branding, unique marketing position and the relatively large customer base (as Huawei's smartphone shipment in the first half of 2020 accounted for 43% in the Chinese market), the company as a latecomer in the Chinese TV market still needs more time to gain prevalence. According to Omdia, Huawei TV's 2020 shipments target is 1.5 million, which is miniscule compared with Xiaomi's 10 million shipments in 2019.

OPPO, as one of the top five smartphone vendors in China, will definitely strive to find a foothold in the Chinese IoT hype. After Huawei and Xiaomi made themselves the global top five wearable device companies with Huawei GT series and Xiaomi wristbands, OPPO finally joined the wearable device feast by releasing OPPO Watch in March 2020 and the OPPO wristband in June 2020.

After the strong smartphone-related devices ready in the market, OPPO's TV products closely follow the steps and was reported in early September 2020 that the OPPO smart screen will face the market soon in China. Though OPPO's smartphone shipments surpassed those of Xiaomi, taking the second position in the Chinese market, the company has not yet marched into the smart home appliances arena, while many other electronics vendors have become hands on.

However, the OPPO 'family' realized the importance of home appliance connections earlier than its TV product release in the Chinese market. OPPO's subsidiary company OnePlus released its first smart TV product in India in 2019, which was in line with its smartphone positioning; it targeted the high-end market, using Quantum Dot Light Emitting Diodes (QLED) and 55-inch screens.

Realme, another OPPO-related company which targets the young consumer group, has been growing aggressively in the South Eastern Asian smartphone market to the top five shippers during the second quarter of 2020 and the top 3 in the Indian market. As a business expansion, realme launched smart TV products in India during the second quarter of 2020. The display sizes of 32'' and 43'' and the price – around USD 300 – suited realme's young and affordable brand image and the consumption level of the Indian market.