The flat monthly shipment trajectory of 5G handsets in China marks an end to the 5G bonanza the local vendors have been enjoying. The exhaustion of demand is bringing calls for a move to their next battlefield – India. 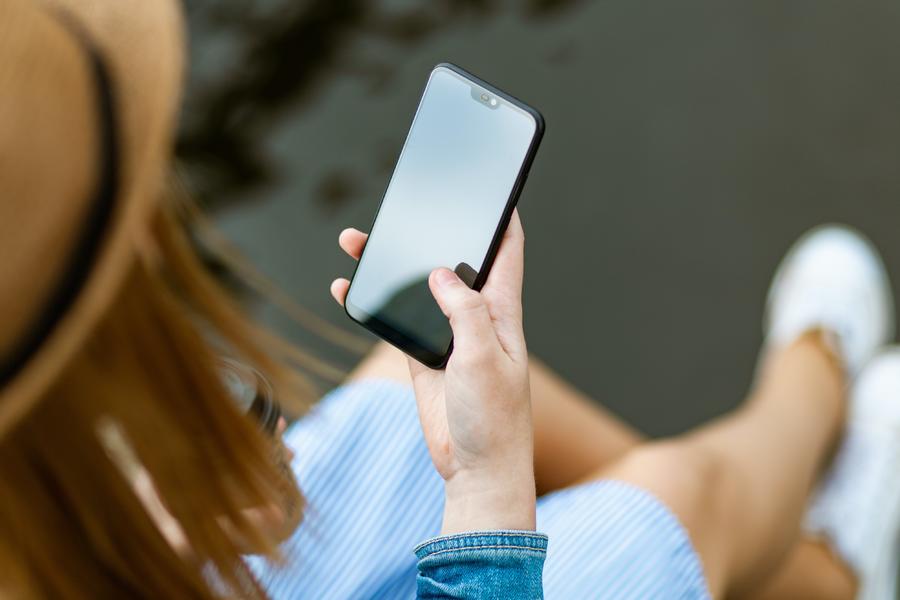 ● The Chinese smartphone vendors' dominant role and the limited supply of substitute products in the Indian market left them less susceptible to the political turbulence between the two nations.

● Despite the intense competition among the top vendors in India, the market is yet to be saturated.

● The rapidly declining penetration of feature phones in India caused by the increasing demand for remote study will provide further momentum to Indian smartphone sales.

● With reference to the Chinese market, India's 5G smartphone boost is projected to happen in the first quarter of 2022, when the market share of 5G models in the total smartphone sales is estimated to reach 40%.

● A major challenge for aspiring companies in the Indian market is how to better localize their operations, and develop comprehensive pricing strategies.

● The Indian smartphone market has its uniqueness, which in some ways negates the power of the ‘China effect’ – a larger market for low-end smartphones and a longer adoption period for 5G devices, which will contract the vendors' benefits.

Which Chinese companies are likely to gain the most?

Viewed by many as the next global economic leader, India has already shown strong signs of such ambitions – a fast-growing GDP per capita (4.9% YoY growth in 2019 to USD 2,104), and a consumer market expected to become the largest in the world. Consequently, the country has become a critical market for ambitious global companies, among which the Chinese companies are arguably the most active. In the technology sector, Chinese companies have been diving deeply in India, with software companies like Alibaba (BABA:NYSE, 09988:HK), Tencent (00700:HK), and ByteDance rivaling the US champions – Facebook (FB:NASDAQ), Amazon (NASDAQ:AMZN) and Google (GOOG:NASDAQ). Meanwhile, the Asian nation's hardware vendors, like OPPO and Xiaomi, are leading the market with a combined 73% share in the third quarter of 2020.

However, as tensions between India and China escalated in 2020, the former has taken action against China's commercial presence. The government first banned Chinese telecom operators Huawei and ZTE (00763:HK) from 5G equipment installation. Then, by November 2020, India had announced three rounds of app bans, looping in over 218 apps developed by Chinese companies, referring to cybersecurity concerns. According to TechCrunch, there are no Chinese apps left among the top 500 apps used in India, as of December 2020. 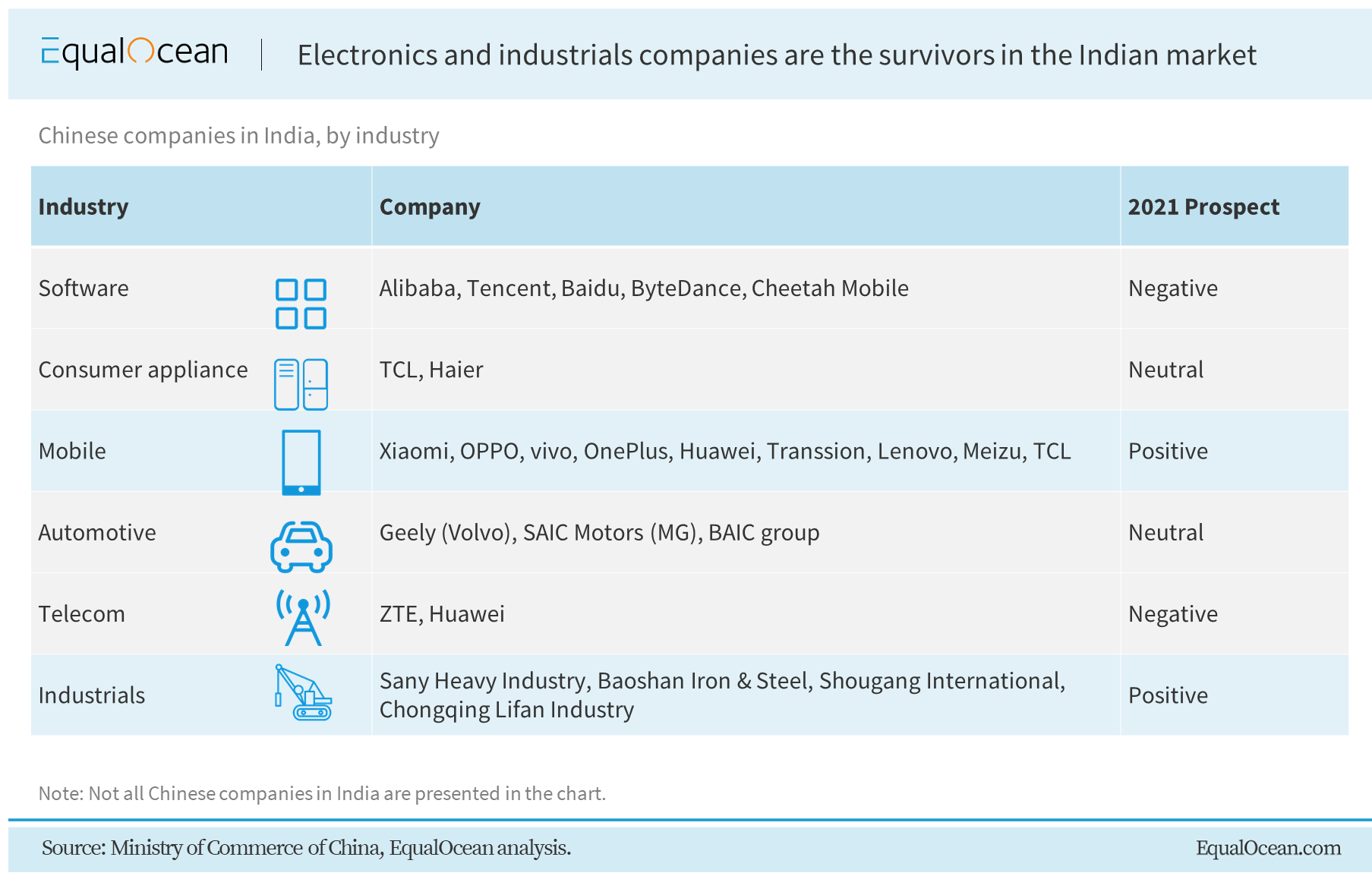 Thus, while Chinese telecom providers and software application developers are evicted from the Indian market, the consumer tech companies from China – vivo, OPPO, realme, Xiaomi (01810:HK), Huawei, Transsion (688036:SH) – are the survivors and likely to keep collecting the fruit from the world's second-largest smartphone market  and its upcoming 5G rollout. Though following the political clashes there have been 'boycott China' sentiments, we consider that there will be little to no impact on the Chinese consumer electronics companies' businesses in India, as the market is still price-sensitive. This has strengthened these companies' price advantages. Moreover, in the short-term, as the Chinese brands are dominating the market, the 'boycott' power might be restricted by the shortage of substitute products.

Indian smartphone market – the uphill struggle, the structural growth and more with 5G

Since 2017, the Indian smartphone market has been skyrocketing along with the rise of its Internet economy. The entrance of Chinese brands provided further impetus to the market’s growth, with intensified competition on products and pricing. The year-over-year growth of smartphone shipments since 2017 has been high, at 10%.

In 2020, an expected shipment decline was caused by the COVID-19 pandemic, which drained the local consumption power. However, the quarterly shipment rebounded to a historic high in 3Q 2020 as the nationwide practice of work/study from home drove up demand.

Per our estimation, the smartphone shipment volume in 2020 will be similar to the number in 2019 with a slight decline, and it will back to the growth track – moderately – at around 160 million units in 2021. Unlike China's continuous declining market at approximately a year-on-year decline at 15%, India's smartphone market is still on the uphill. Thus, the current winners are not the final ones. Any emerging technologies or strategies can reshuffle the competitive landscape.

Besides, India has started the transition from a feature phone-dominated market to a smartphone- oriented one. As the Internet services are getting more deeply embedded in people's work and life, plus India's growing economic strength, smartphones with 3G/4G/5G network will replace 2G feature phones. 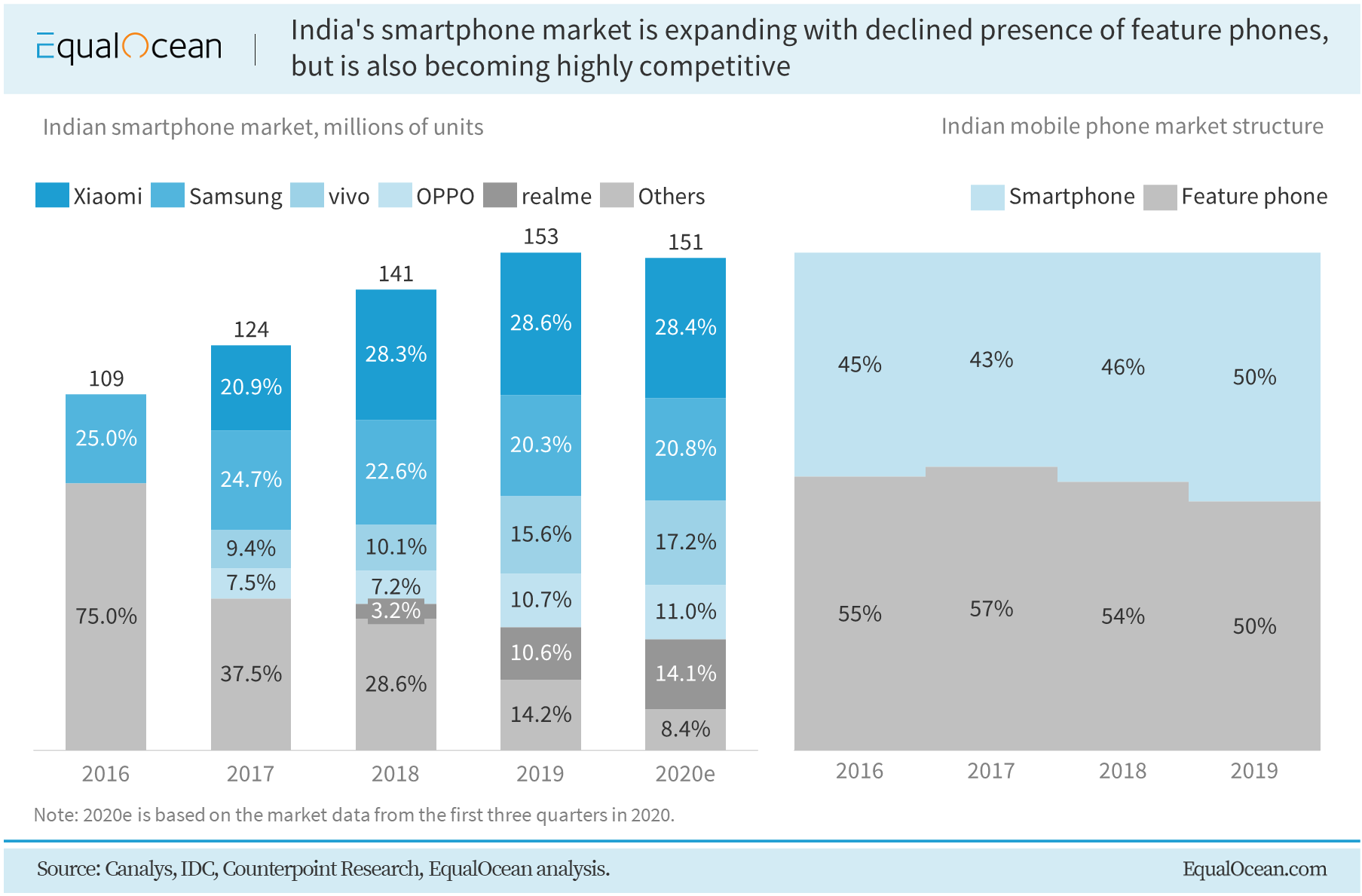 The market has seen tremendous changes since 2016 with Chinese companies rapidly occupying the market that was previously taken by Indian local vendors Micromax, Intex and Reliance Jio. Ever since Xiaomi, vivo and OPPO entered the top five in terms of market share, they have been increasing their user base and eroding small companies from the 'others' category. In the meantime, as in 2020, the top five vendors are expected to take over 92% of the total, the market has become highly competitive and vendors are in a close race. Thus, the upcoming 5G upgrade in India will be the opportunity for both Chinese smartphone companies and Indian local vendors to disrupt the current order.

According to Indian media, the department of telecommunications is likely to conduct 5G spectrum access auctions in the first quarter of 2021, though the official announcement is not yet to be released.  Assuming that the auction won't be postponed because of the pandemic, the second quarter of 2021 will hopefully see the Indian telecom operators getting the 5G commercialization licenses.

Though the 5G ecosystem is far from developed, the infrastructure constructors and smartphone vendors will be the first to have returns on the 5G upfront investment. In China, the telecom operators were licensed for commercialized 5G spectrum access in June 2019, approximately two years ahead of India's projected case. Due to the mixed forces of chipset developers' push and competition among vendors, the 5G-ready phones will come to the market at least half a year earlier than the related 5G services.

The first generation of 5G phones in China was released in the first quarter of 2019 by OPPO and vivo with the second wave of 5G phone releases happening by the end of 2019. The market share of 5G smartphones is likely to be stabilized for some time before it can be spurred again by breakthroughs happening in the 5G application area. 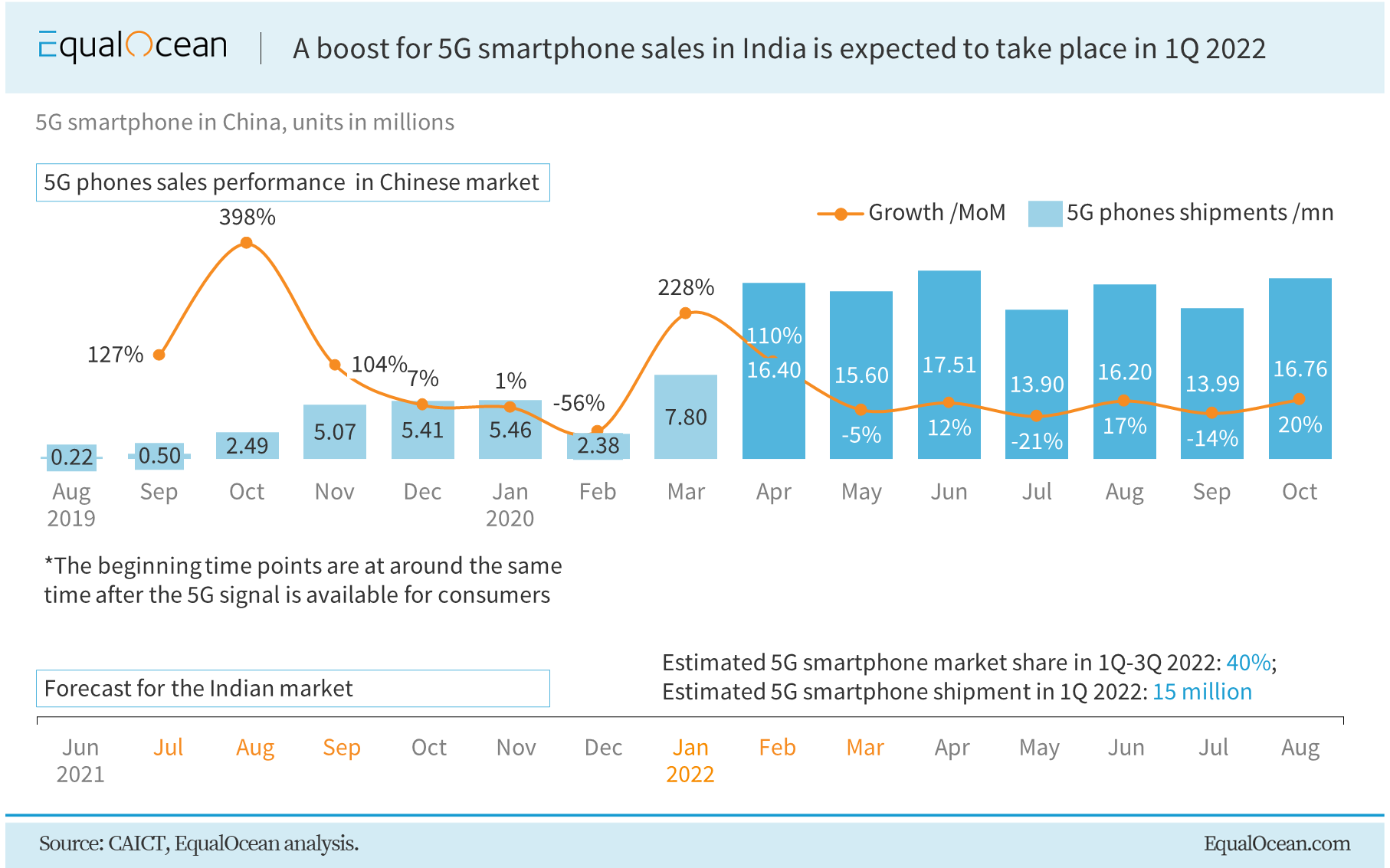 This case can be mirrored in the Indian market as well, but with an approximately two-year time lag. If we consider the quarter following the telecom operators got licensed for commercialized 5G signals as the start of massive 5G phone sales, the two crucial time points for vendors to occupy the 5G smartphone market share is in the 3Q 2021 and 1Q in 2022. By the first quarter of 2022, the share of 5G smartphones in the total smartphone shipment is expected to be 40%.

2. The Indian market's uniqueness – the benefits would be lower in value and longer in return period

(1) Compared with China, India has a larger market for low-end smartphones

The Indian market tells a similar story that the mobile terminals tend to welcome the new generation of networks ahead of the telecom operators. In the first quarter of 2020, Realme and vivo's iQOO released their first 5G-enabled phones in India. As of December 2020, there are over 20 models with 5G registration. 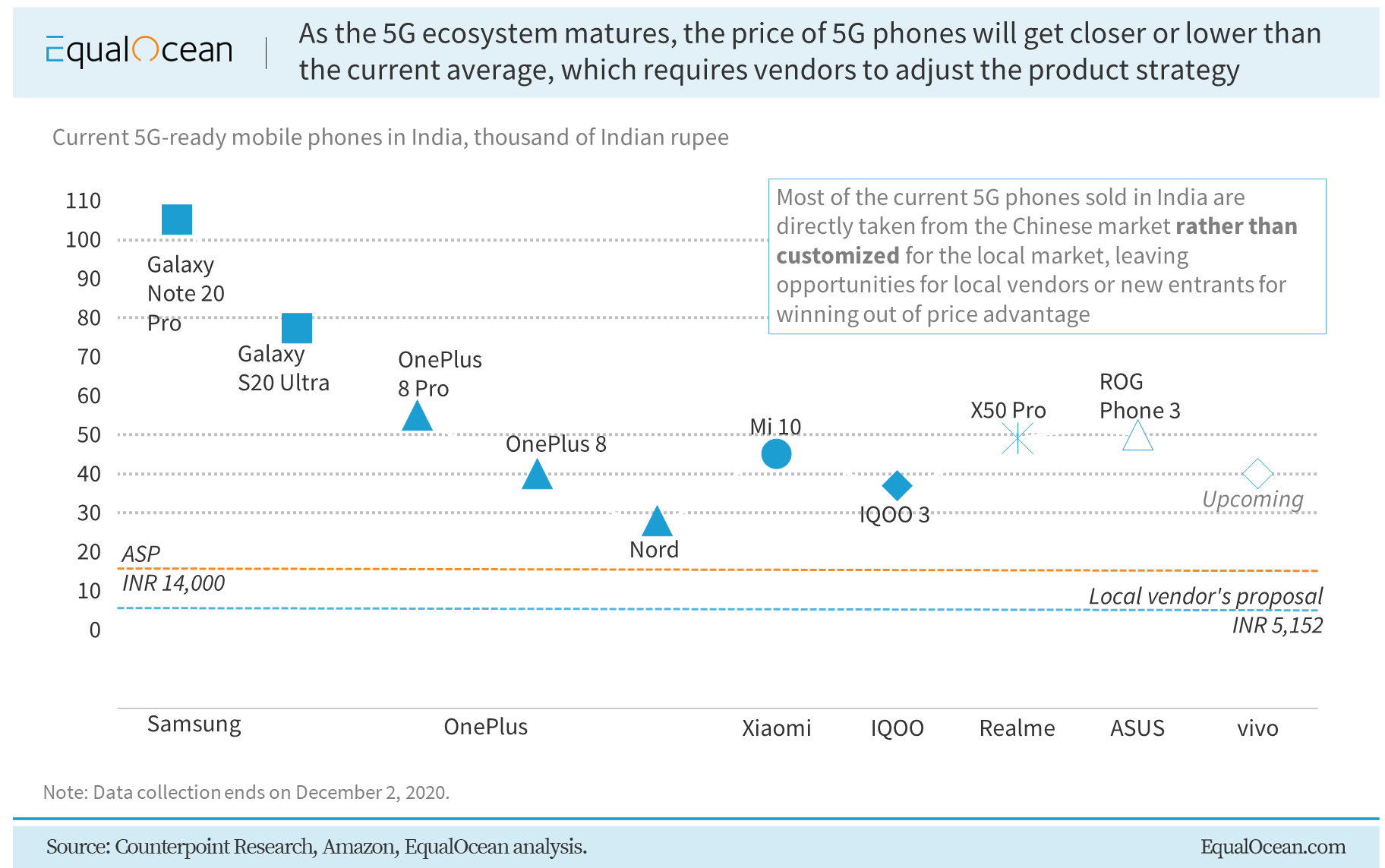 However, these 5G models in India are all directly taken from the companies' local markets – mainly South Korea and China. Thus, the selling price of these models is at least 100% higher than the market's average, indicating the top vendors have not yet attached much importance to the Indian 5G mobile market and the fast-growing phase is yet to come. Even at the climax of 5G smartphone sales, which is estimated to happen at the beginning of 2022, the average selling price will be 30% lower than the number in China according to the data in the 4G arena, which will somehow compress vendors' profits.

Besides, as reported in October 2020, the Indian top telecom network platform Reliance Jio has confirmed a USD 4.5 billion investment from Google. According to Jio, the funding will be used in launching smartphones (Jio has the third-largest share in the Indian feature phone market) in the following years. A customized Android-based operating platform for low-end smartphones will also be authorized to Jio's phones to realize higher cost-efficiency in supply management. With this type of price competition, the value that the Indian 5G market will be further contracted.

Commercialized in May 2008, the 3G mobile network in China presented a life span of seven years as in the year of 2014, the major Chinese vendors ceased to produce smartphones without 4G function. However, in India, where the 3G network launched in December 2008, the 3G smartphones were still the mainstream in the market in 2015, according to Xiaomi.

The comparatively longer adoption for a new generation of mobile networks is a result of mixed reasons, including infrastructure constraints and the local consumer market dynamics. Consequently, for the Chinese brands in India to be responsive to the local market, it is expected to have a longer period that 5G and non-5G smartphones coexist. The coexistence will lead to additional unit cost as the production scale of smartphones without 5G functions will be shrinking significantly during the following years, and the unique demand for 4G-only low-end smartphones from the Indian market will be less economical for vendors.