How CATL Can Keep Its Leading Position in Battery Making

With fierce in-sector competition, having a clear plan to keep growing and to maintain global market shares is significant to the ongoing success of the giant EV battery manufacturer. 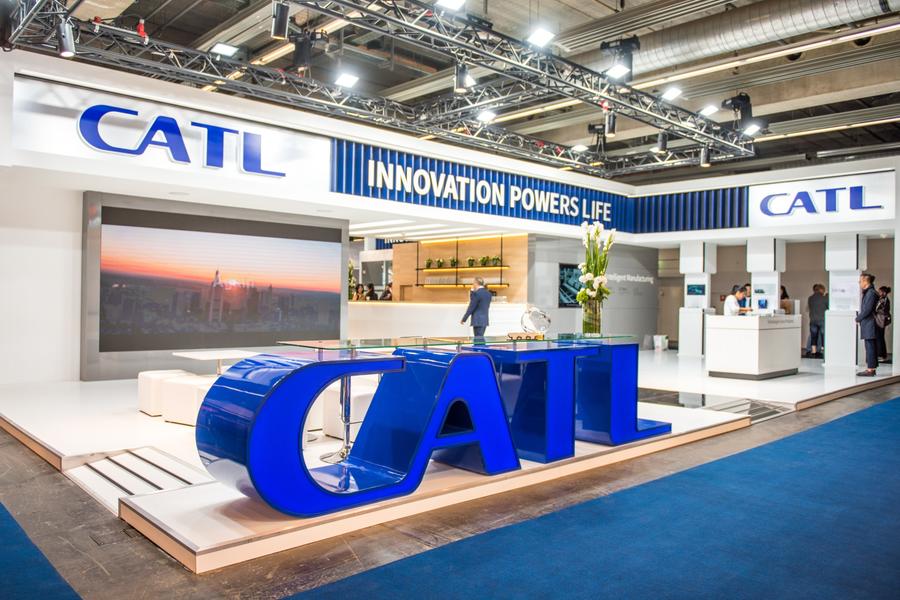 On November 14, 2020, CATL (300750:SZ), China Chang'an Automobile Group (000625:SZ), and Huawei announced their plan to co-build a high-end intelligent vehicle brand. Though CATL has said several times that the company has no plan to rush into the vehicle manufacturing and assembly businesses, its latest moves and development strategy tell the opposite, with the signs attracting a great deal of attention from both national and international investors in the space.

Founded in 2011, CATL has grown into one of the largest EV battery manufacturers globally. The CEO and founder of CATL, Yuqun Zeng, used to be one of the founders of ATL, a battery manufacturer acquired by TDK (6762:JP) in 2005. His team was the first to address the battery inflation problem of polymer lithium cells from Nokia Bell Labs. That engagement shows the company’s technical superiority.

Looking back over the history of CATL, the company's success followed three favorable opportunities. First, China began to provide funds supporting EV battery companies in 2015 and CATL was on the list. Besides, unlike BYD (01211:HK), which insists on the low-energy-density lithium iron phosphate batteries (LFP), CATL has committed to high-energy-density ternary lithium batteries, gradually increasing its market share. Then in 2017, the Chinese government's support for energy density-emphasizing batteries became the third booster for CATL.

CATL has been keeping a low profile in its development. According to a third-quarter report released on October 28, in the third quarter, the company achieved a revenue of CNY 12.7 billion, up 0.8% year-on-year, and gained a net profit of CNY 1.42 billion, up 4.2% year-on-year. It should be noted that the company's performance in these figures is after the deduction of CNY 1.01 billion assets and credit impairment reserves. If the reserves are considered, the net profit growth rate of the third quarter will surge to 77.7% year-on-year. From 2015 to 2019, the company's revenue and net profit maintained high growth, with CAGRs of 73% and 66%, respectively. In the first three quarters of 2020, although the company's performance was impacted by the COVID-19 epidemic, it still achieved operating revenue of CNY 31.52 billion and net profit of CNY 3.36 billion. 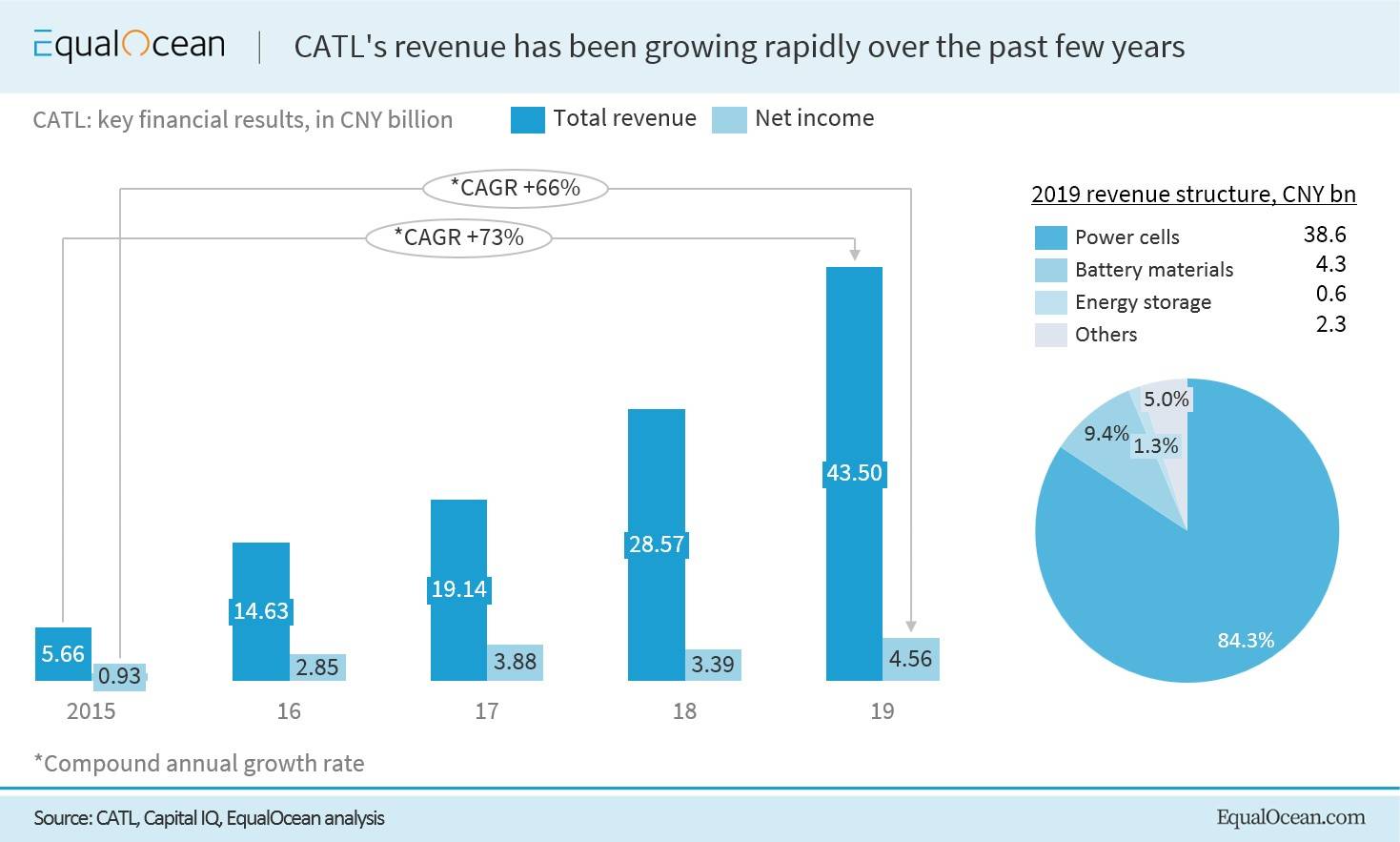 Cost-side advantage – but a lot of room for improvement

One of the advantages of CATL over other competitors is lower battery cost. In recent years, the price of EV battery packs has moved down dramatically. In 2019, the average price of EV battery packs has dropped to CNY 990 per kilowatt-hour, and the price is projected to further down to CNY 720 per kilowatt-hour in 2022. According to Bloomberg's research report, EV battery pack prices have fallen to an average of USD 137 (about CNY 900) per kilowatt-hour (December 2020). In 2019, the company's operating profit margin decreased to 12.1%, but it is still far higher than its competitors, LG Chemical and Samsung SDI (-5.4% and 0.7% respectively), showing that CATL-led Chinese battery companies are the cost leaders in the global market.

However, with fiercer competition both in EV-related markets and in the price war with traditional vehicles, further cost control is crucial for the future development of CATL. The revenue level and net profit of CATL have been significantly improved, but the gross margin has decreased significantly, from 44.8% in 2016 to 28.5% in 2019. We believe two ways CATL can take aim at the next development stage, which are further strengthening the whole supply chain capacity and keeping improving product energy density and automation level.

Upstream and midstream links are keys 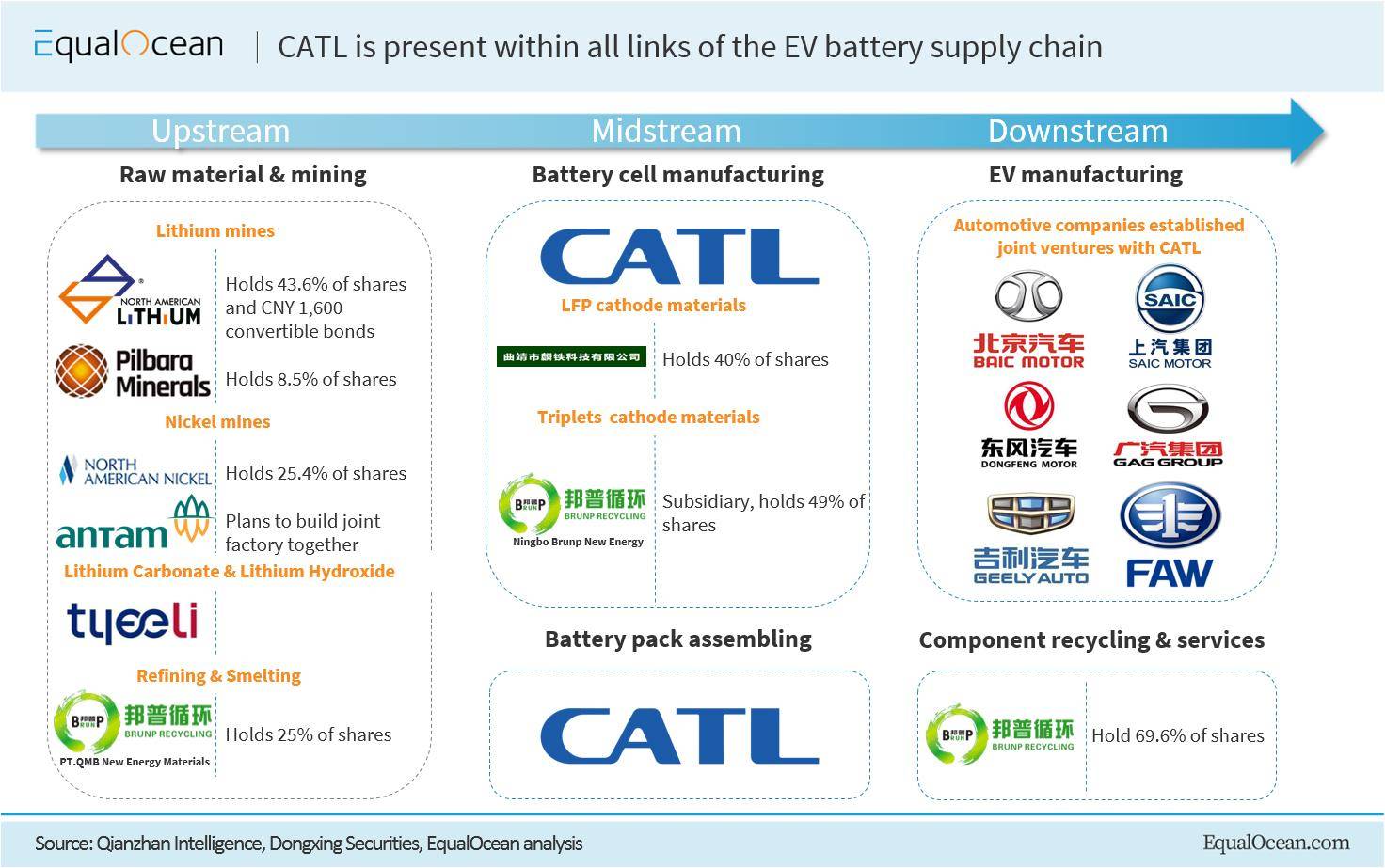 To minimize the cost, CATL has a careful layout in all links of the EV battery supply chain in recent years. In the upstream link, CATL participates in the mining and processing of lithium, nickel, and cobalt through equity investment and long-term purchase agreements. In the midstream link, it focuses on critical cathode materials, ensuring the supply and quality of raw materials by establishing subsidiary factories. In the downstream link, CATL is actively building joint companies with domestic automobile companies and sets up recycling bases to accelerate the layout of China's battery recycling system. The cooperation with Huawei is also related to its EV supply chain plan. CATL can help Huawei promote automotive electrification, while Huawei can assist CATL in further consolidating its position in the industry. Notably, upstream and midstream link products cover over 80% of EV battery costs. Therefore, keeping investing in anode material and cathode materials companies will help the company further control the cost

CATL is not abandoning NCM811

As for the product research aspect, we believe CATL will not abandon NCM811 – and the multi-direction research mode is a great idea. Among all the battery types, the NCM811 battery is of great concern. The energy density of NCM811 cells produced by CATL can reach 280Wh/kg, second only to that of Panasonic's NCA21700. Compared with the common NCM523 battery, NCM811 achieves 18% more capacity, helping the company gain a 5% more gross profit rate. However, some safety and life problems exist in today's technology. Since May 2020, several spontaneous combustion accidents have happened with GAC New Energy Aion S model, an EV equipped with CATL NCM 811, in Guangdong and Hainan. It has been rumored in the industry that CATL will give up NCM811 battery research. 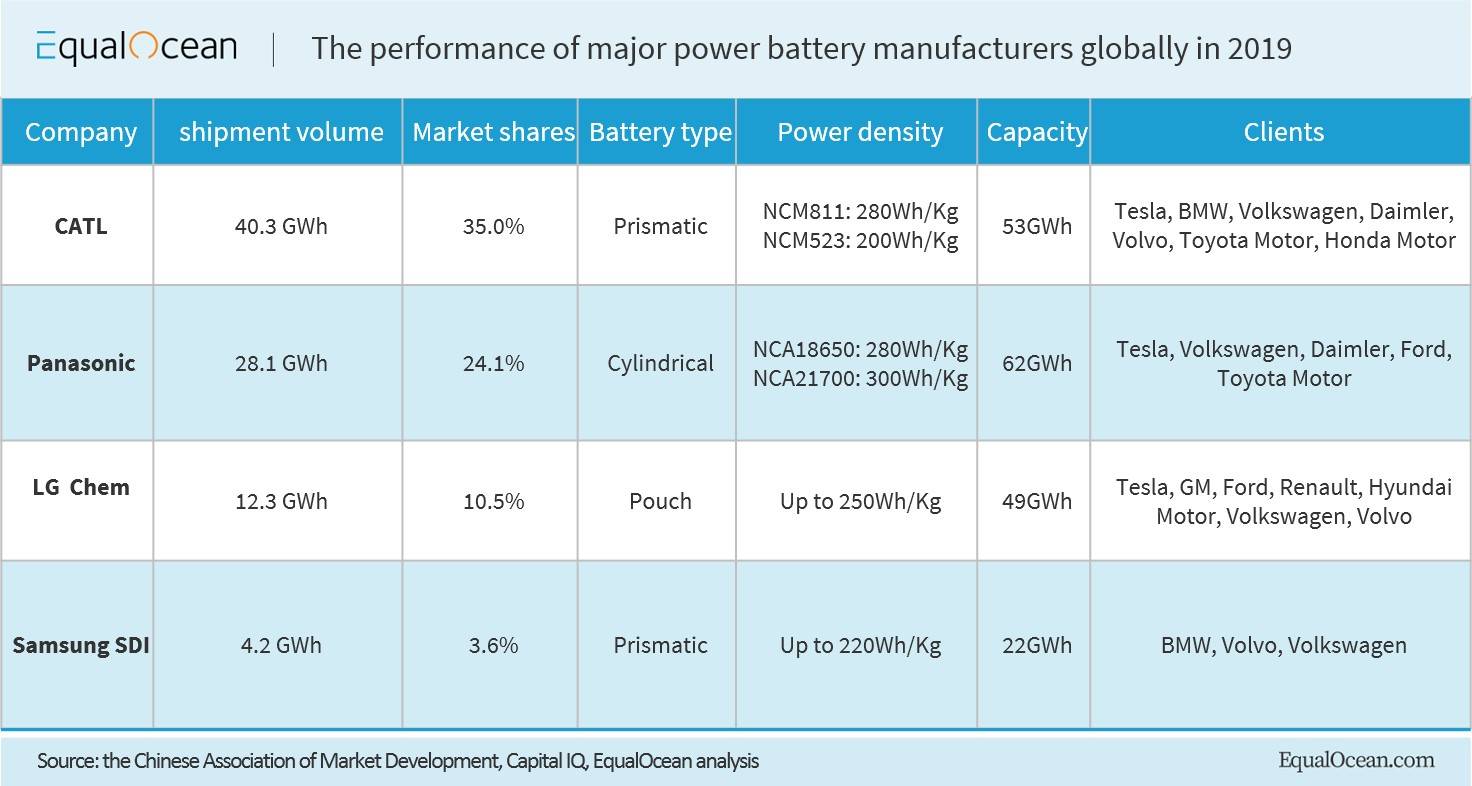 The reason we think the company is not giving up NCM811 battery research is the low-cost feature of NCM811. The cost of raw materials accounts for 63% of a whole EV battery. Among all the materials, cobalt is the most expensive one. In 2016, the price of cobalt was only CNY 120,000 per ton, while up to now, the price of cobalt surges to 264,000 per ton and still has an upward trend. This is why the proportion of cobalt in the battery has been decreasing, from lithium cobalt oxide batteries (59% cobalt) to the widely used NCM523 batteries (12% cobalt), then to the NCM811 batteries (7% cobalt).

The development of cobalt-free batteries and low-cobalt batteries are the focuses of the industry. The four major EV battery manufacturers (CATL, LG Chem, Panasonic, Samsung SDI) in the world all take the cobalt-free and low-cobalt batteries as the next development direction. In March 2020, LG Chemical signed a purchase contract to receive 125,000 tons of high nickel cathode materials from 2020 to 2022. As the NCM battery with the lowest cobalt proportion enters the mass-production stage, the research on the NCM811 battery and the exploration of its stability problems will become a main competition point to the power battery market soon.

Moreover, CATL has not chosen to put all its eggs in one basket but has tried to research several approaches. The energy density of high voltage and large module NCM523 announced by CATL in September is close to NCM811. At the same time, the company is also developing Cell-To-Chassis (CTC) technology. The technology abandons the battery pack, integrates the battery cell and chassis directly, and optimizes the power distribution through intelligent controllers. This technology solves the safety problem radically, and the range of EVs battery using such technology will top 800 kilometers. Meanwhile, its cost can directly compete with fuel vehicles. As for the other development direction of power batteries – solid batteries – the chairman of CATL, Zeng Yuqun, said in late 2019 that the company is investing in solid battery research. This proves that the company has not put all its bets on NCM811 and this mode may become key to its future development.

Undeniably, EVs have attracted extensive attention worldwide. As the core component of EVs, the competition in the power batteries sector is likely to be fierce in the near future. In order to maintain its leading position and effectively control its cost, strengthening the whole supply chain capacity and keeping improving product energy density may help CATL enter the next development stage.