Although the firm is currently valued below its peers GSX and TAL, we believe it is exceptionally positioned in the industry. We tag it as a stock to consider launching a position in. 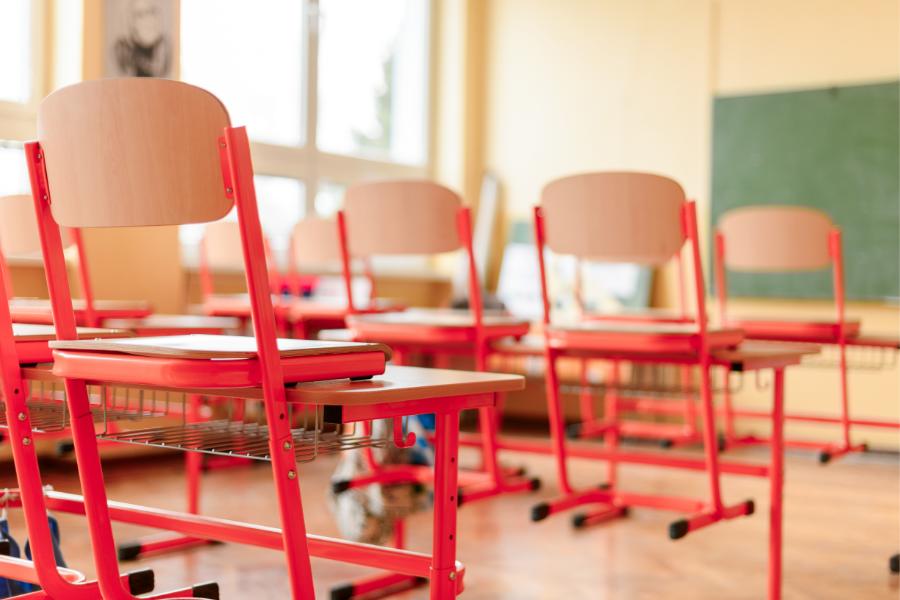 Founded in 1993, New Oriental is the largest and oldest private education service provider in China. The firm's business breaks down into a few segments, the most fundamental offering after-school tutoring sessions for middle and high school students to prepare them for High School (zhongkao) or College entrance examinations (gaokao). The company provides small-scale or one-on-one class settings to better customize teaching methods for individual students.

According to the company's FY 2020, about 5.3 million students were enrolled in these classes. There are many types of test preparations, especially foreign entrance exams as follows but not limited to - SAT, SSAT, ACT, GRE, GMAT, LSAT, IELTS and TOEFL. There are also after-school tutoring courses for children and online courses. For instance, Koolearn and Donut classroom are the two main online websites operated by New Oriental. The company also operates 'interactive after-school tutoring courses' (DFUB), an online tutoring website, in lower-tier cities. These segments generate the most of the company's revenue. 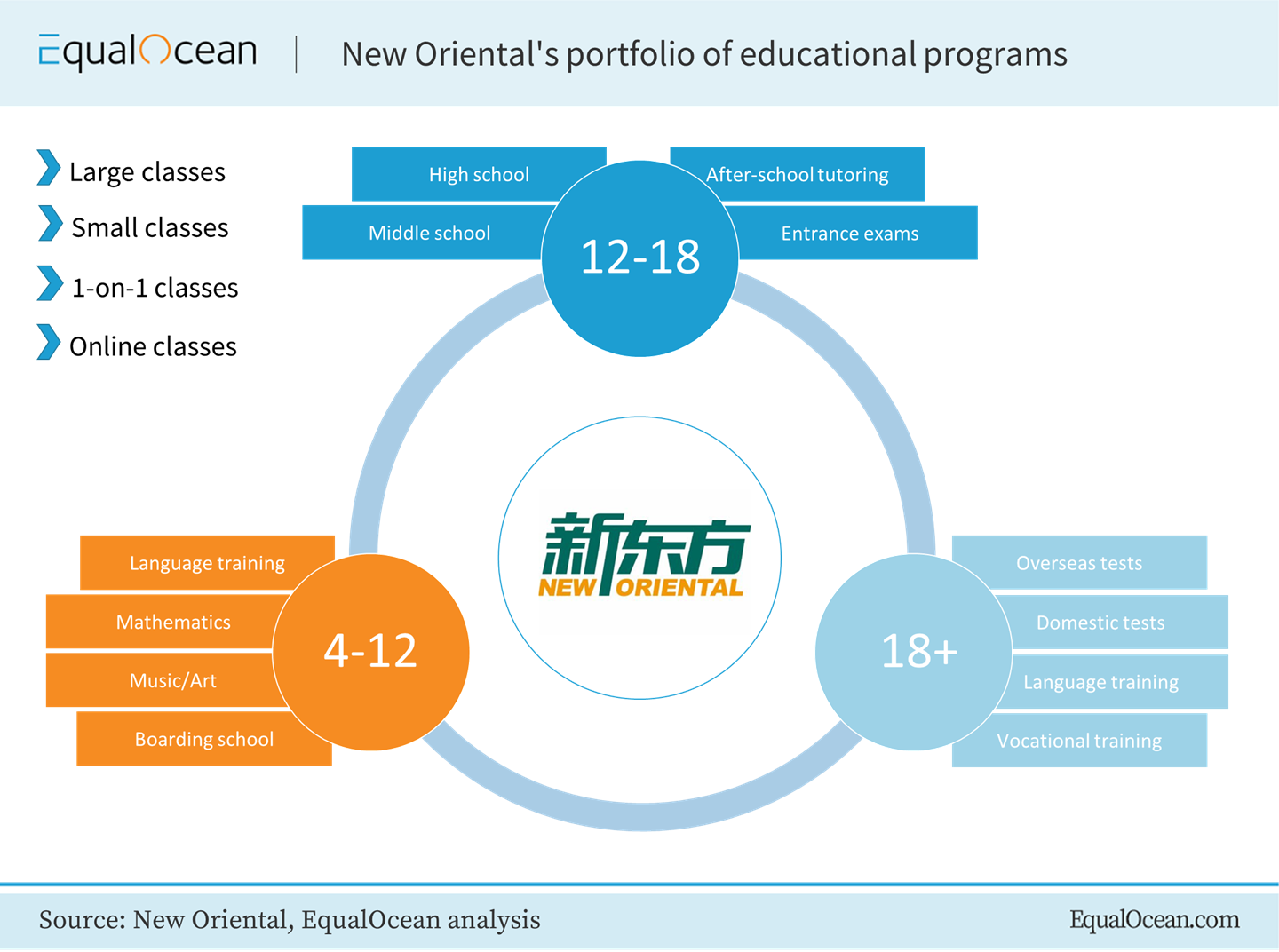 The firm is also the first Chinese education stock to get listed in the US in 2006. It started off at a mere USD 6 per share. As of February 22, 2021, it stands at about USD 193 per share with a market capitalization of USD 33 billion. Since 2010, New Oriental's revenue has reached USD 3.5 billion, an increase of almost 10 times. The company has remained profitable with a positive cash flow throughout this period. While the company is still solidly profitable with continued growth, cost management is a risk factor for investors to consider before purchasing its stock.

New Oriental decided to return to China with a secondary listing on the Hong Kong stock market in October 2020.

2020 was destined to be an unforgettable year for the education and training giant, New Oriental. The social distancing complaint forced offline learning institutes to shut down for a year, hammering the education industry heavily. Meanwhile, major educational institutes started to expand online businesses in this ever-changing climate during the pandemic.

With New Oriental's rapid development in its online-merge-offline (OMO) businesses, it achieved a 20-25% capacity expansion, alongside the company looks well-positioned to gain market share going forward. Given the prospects for industry consolidation post-COVID-19.

New Oriental CEO Zhou Chenggang explained, "The OMO strategy, together with localized and differentiated teaching content, can effectively increase the number of applicants and income at a lower cost, allowing us to further seize more market opportunities and increase the company's long-term profitability."

Until now, New Oriental invested USD 39 million to improve and maintain its OMO integrated education ecosystem. In the fall of 2020, New Oriental stated that it had not only fully covered the OMO stage in most cities, but also implemented OMO online courses in 20 newly developed cities, achieving a high student retention rate at a low cost.

Yang Zhihui, the executive president and chief financial officer of New Oriental, pointed out that New Oriental's profit margin trend is gradually improving as well as revenue. In the future, New Oriental will continue to strengthen its cost management and carefully invest in OMO products and online platforms to balance growth and profitability.

Due to adverse impacts from the pandemic and travel restrictions, New Oriental's overseas examination business decreased by 29% year-on-year, and the combined study abroad consulting and study tour business increased by 6% year-on-year.

From the latest guidance regarding the recovery potential in the K12 business, it appears that this business is well on track to bottom out after the summer promotions. The guided revenue reaccelerated to about 25% year-on-year in 2Q21 (from around 8% in 1Q21), which is particularly impressive given the shortened summer and delayed reopening of learning centers in Beijing.

K12 student enrollment exceeded the most optimistic estimates for 1Q21. The 31% year-on-year growth in summer promotion enrollments was also very impressive, due to the OMO initiatives in some piloting cities.

In the past five to six years, with state support, China's online K12 education industry has witnessed rapid development along with increased capital flows. In 2020, the overall online K12 education market size in China reached approximately CNY 89 billion, a year-over-year increase of 37.6%. 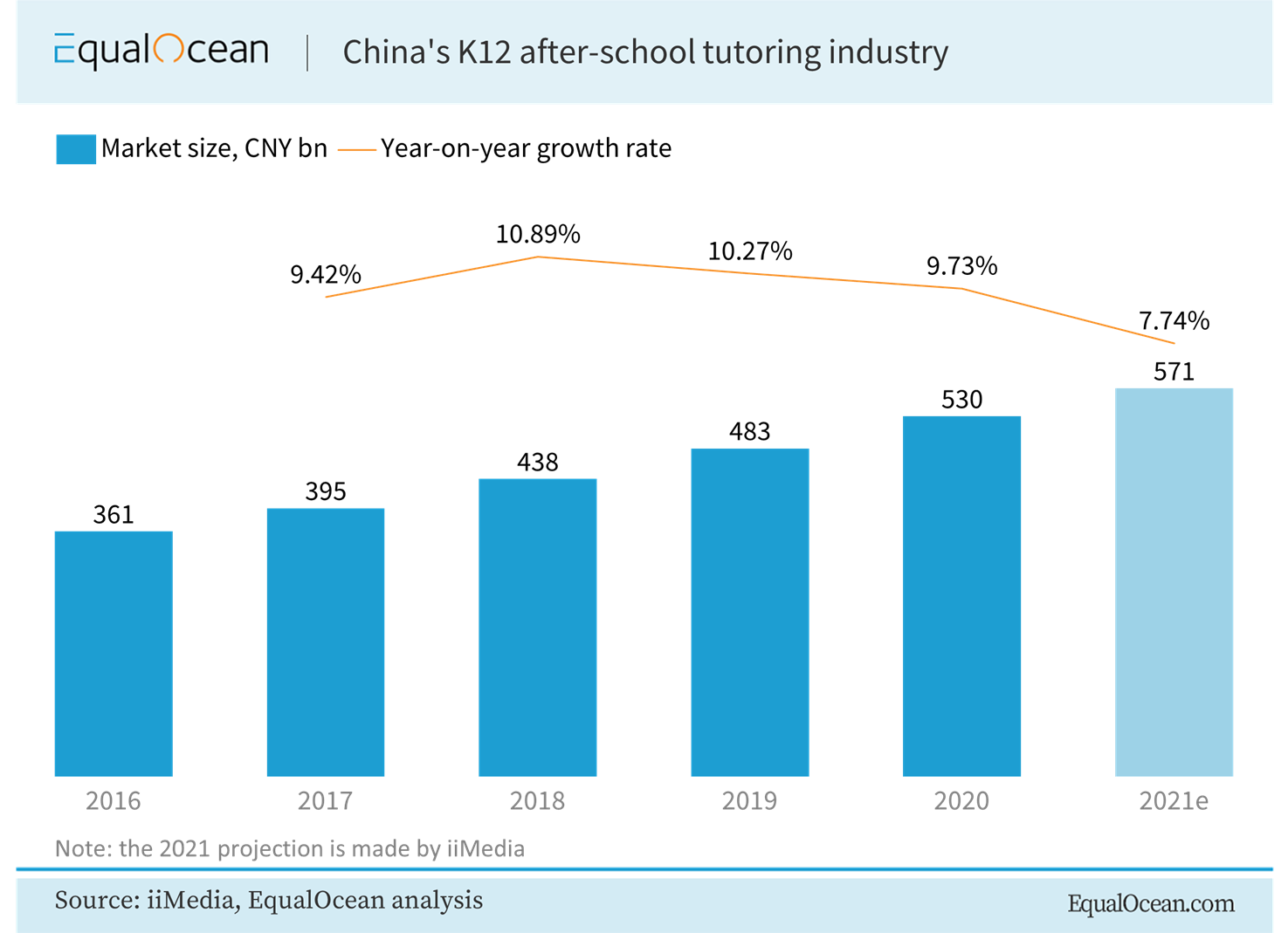 However, some hurdles may affect New Oriental's growth trajectory, such as the declining number of gaokao (university entrance examination) takers as an effect of the declining population in China overall.  China's population growth rate has been less than 0.5% for the last 10 years and will likely begin to contract by 2027. The student numbers grew rapidly in the early 2000s, and are now beginning to flatten out at roughly 10 million. The number of gaokao takers grew at a mere 1% compounded annual rate in the last year. 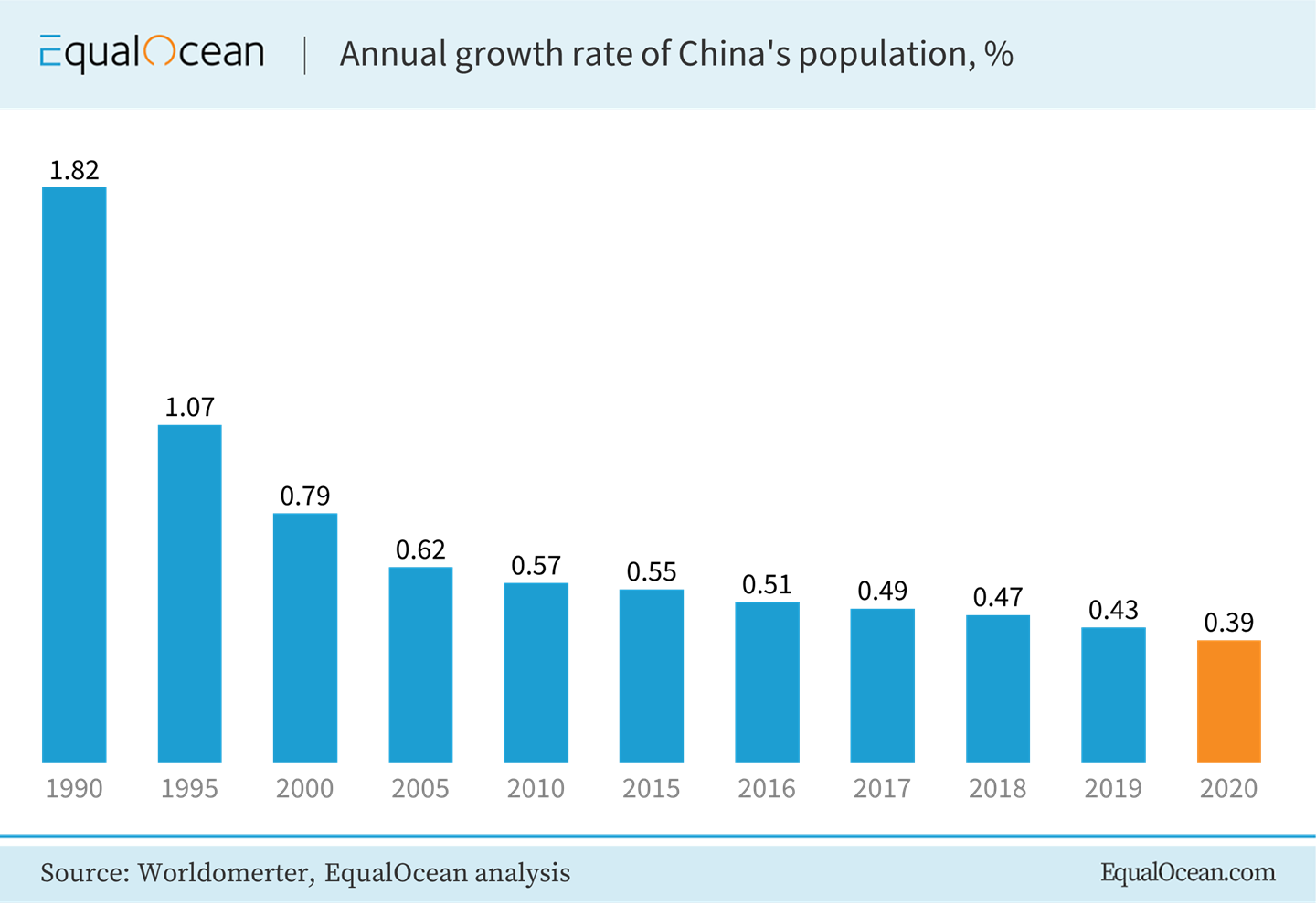 As mentioned above New Orientals' performance has slowed down but remained steady at the same time.

TAL Education (TAL), New Oriental's direct competitor, has accelerated its growth over the past few years. It has a stronger focus on K-12 after-school tutoring services. If we compare TAL to EDU, EDU has a broader business model with a bigger revenue base, while TAL focuses more on K12 after-school tutoring.

We consider them as competitors for various reasons. Firstly, these two firms have a similar pool of consumers although they focus on different segments. In detail, TAL focuses on K-12 after-school tutoring services. One of its brands, Xueersi Peiyou, is the most popular brand for different tutoring services. Secondly, both these firms started off as offline after-school-tutoring academies and slowly added online education to their portfolios. Thirdly, they both use the dual-mode 'large-class' - i.e. merging classroom teaching and distance learning.

EDU's advantage in the industry appears to be its stronger brand recognition and its expertise in top-quality English teaching compared to TAL. Impressively, EDU has around 117 schools, 1,518* learning centers, and 12 bookstores. The company can also access a nationwide network of online and offline bookstores through 131 third-party distributors, while encompassing over 45,700 teachers in 103 cities compared to TAL that only has 990 learning centers in 102 cities as of November 30, 2020.

Compared to TAL, EDU has adopted a bottom-up expansion strategy in K-12 education. Starting from the higher grades and expanding into lower grades, EDU focuses on the most motivated groups for private tutoring services, including critical exams for college entrance. On the other hand, TAL failed to encapsulate these student groups in its services.

The gap in market value, according to industry sources, is mainly because of its higher revenue growth rate.

As for TAL, in 3Q FY2021 (three months ended November 30, 2020), net income was USD 1.11 billion, an increase of 35.0% from USD 829 million in the same period of the previous year. The firm said that net income growth was mainly driven by the increase in the number of long-term regular-priced students. According to the financial report, the total number of this student group increased from approximately 2.318 million to 3.39 million, an increase of 46.5% year-on-year. 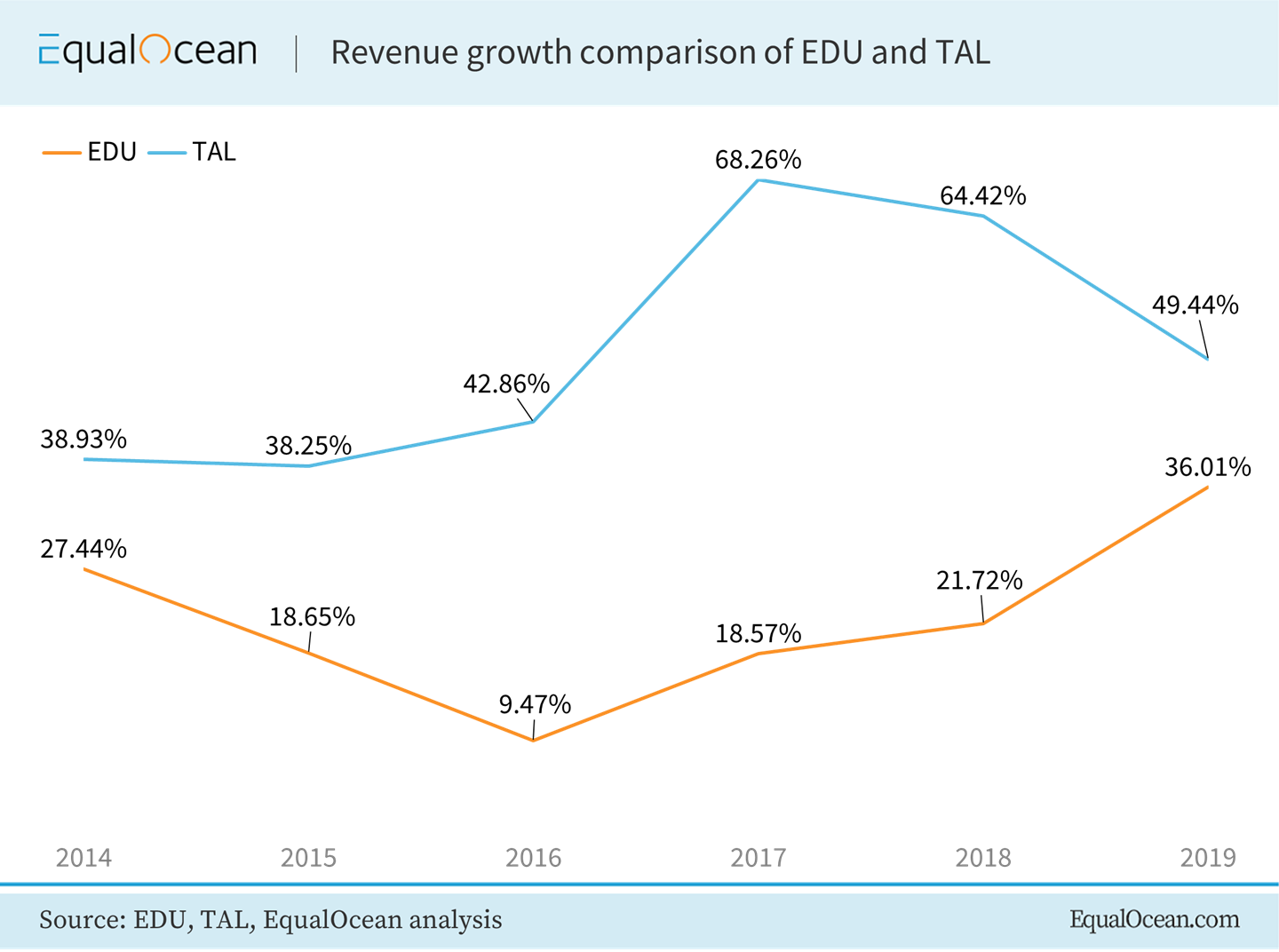 Comparing the revenue growth of these two companies, although New Oriental's revenues have been higher than TAL's for several quarters, the latter's growth rate is higher. But in the past few years, the firm's revenue growth has faced a year-on-year decline. Relatively speaking, the decline of New Oriental has been faster. One of the reasons is that offline businesses still face greater pressure to achieve year-on-year growth while struggling to recover from the pandemic.

In the last fiscal quarter, TAL's marketing expenses increased from USD 263.3 million to USD 379.8 million, a year-on-year increase of 44.3%. In 3Q of the fiscal year 2021, TAL's sales expenses were USD 420.7 million, a year-on-year increase of 120.3%.  The increase in sales expenses was due to more marketing activities in this fiscal quarter to expand the customer base and promote the brand.

In 2Q of fiscal 2021, New Oriental maintained profitability, with a net profit of USD 53.9 million, a year-over-year increase of 0.9%.

Referring to TAL's profit growth trend chart, it was profitable for several quarters in the fiscal year 2019, but declined and showed negative profits in the fiscal year 2020. because of investment in online education. But then the firm became profitable once again in FY 2021. Although the 2021 fiscal year has seen profitability for two consecutive quarters, the decline of the growth rate is huge compared to the two previous years.

According to disclosed data, New Oriental has shown relatively stable profitability in the three fiscal years of 2018, 2019 and 2020. Its non-GAAP net profit attributable to shareholders is USD 350 million, 410 million and 480 million for these three years. Its net profit margin is 14.4 %, 13.3% and 13.5%, respectively, with stable profit margins. Although New Oriental's net profit performance is relatively stable, it also shows a trend of slowing growth.

By leveraging these advantages, New Oriental has prospected to achieve outstanding revenue growth in the long term through organic revenue increases and acquisitions.

It is also worth noting that since 2017, the number of investments by TAL has been decreasing. New Oriental has been more aggressive in investments compared to TAL since 2018. TAL's financing has dropped sharply from 24 in 2016 to only 2 in 2020. New Oriental invested in six education firms while TAL only invested in two similar firms. The situation created by COVID-19 has sped up consolidation in offline K12 teaching, driving further revenue growth and a multi-year margin improvement by extension.

We think that the shifting of some capacities from overseas and domestic test prep businesses and the OMO model could lift the revenue growth potential for the K12 business beyond the planned capacity ramp. On that basis, we see further tailwinds for K12 revenue growth heading into FY22.

New Oriental is a market leader in a large, growing, and price-insensitive segment with excellent brand equity. EDU has a strong trust foundation compared to its peers such as GSX which has been alleged of multiple fraud allegations.

While headwinds present themselves, they are certainly not unconquerable. Investors should keep an eye on the growth and margin levels, specifically for K-12 and Koolearn performance. But investors should certainly consider buying New Oriental's stock.

CONTACT US
Scan QR code to contact us for professional consulting services
Next article
NIO in January 2021: More Good News to Come, Ambush at Low