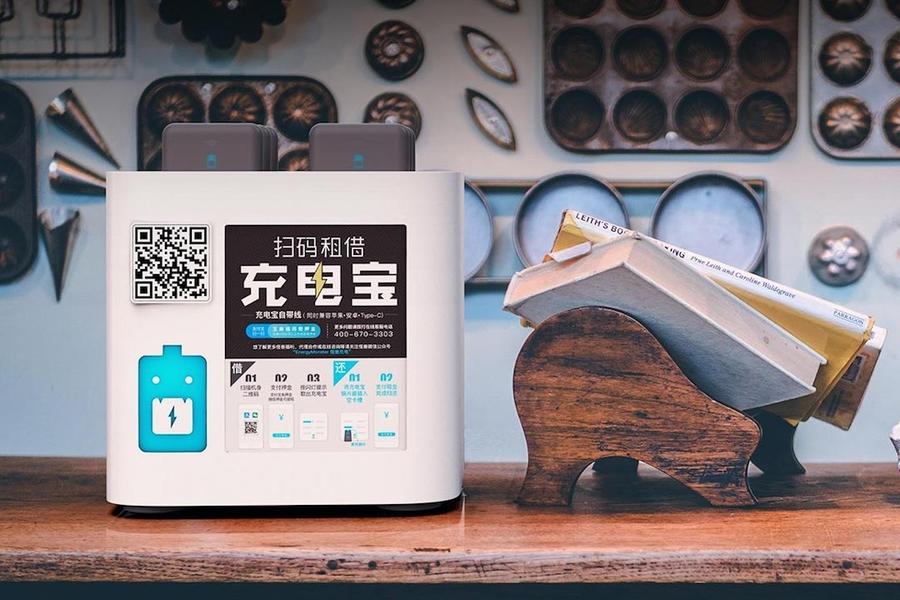 ●        Along with the company's increasing revenue, its operating expense rate has been expanding as well.

●        Despite challenges in the industry, the company's outlook remains positive, and we are optimistic about its future development.

In April 2021, Energy Monster (or Smart Share Global Ltd.), a company running a power bank rental business in China, filed an IPO prospectus with the SEC and consequently raised USD 150 million in its initial public offering. The company is planning to use 25% of the funds it obtained for business expansion, with 20% for workforce expansion to acquire talents, and 35% for capital expansion (including investment in power banks and cabinets). 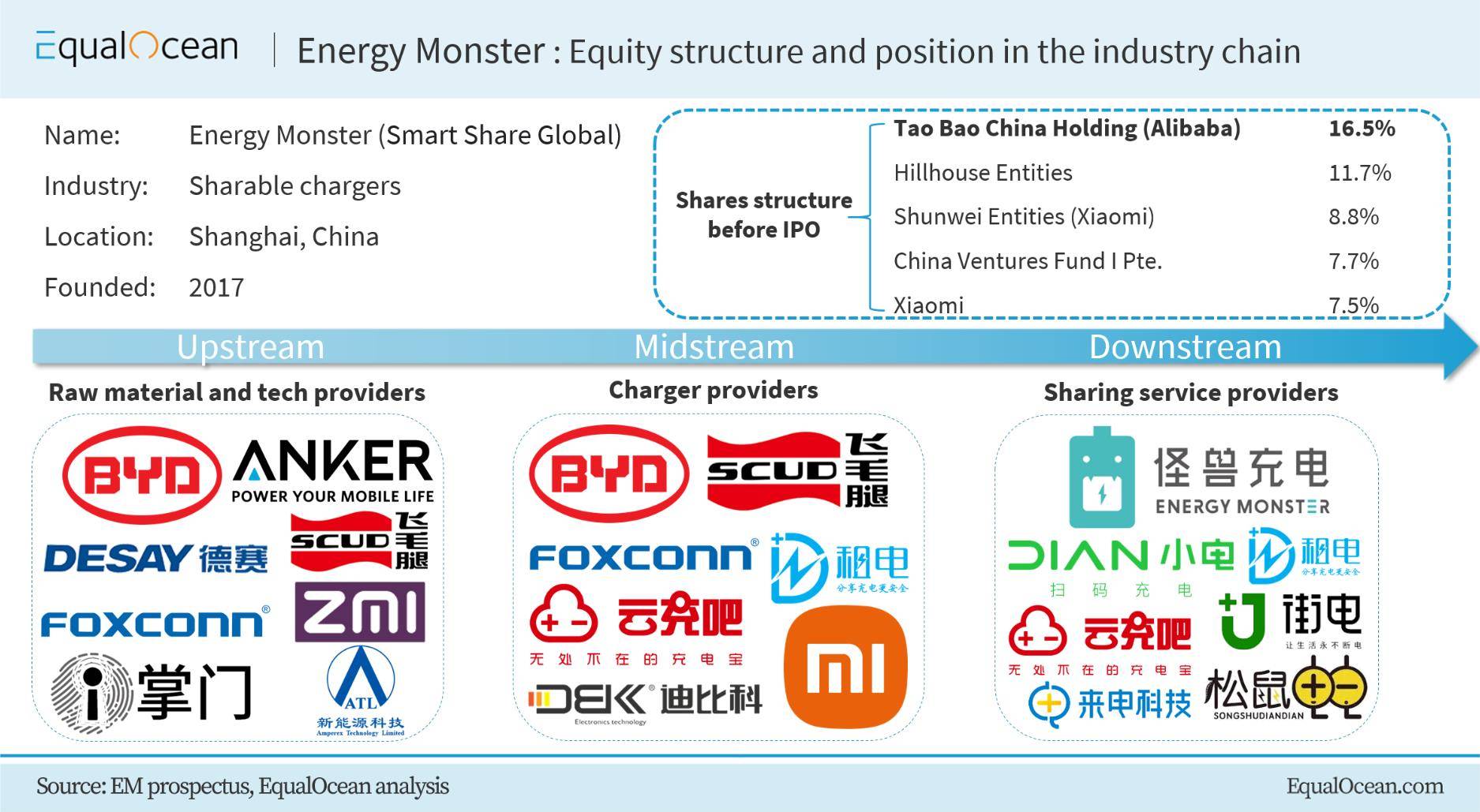 It seems that investors are, thus far, rather pessimistic about the charger-sharing company. On the day of listing on April 7, 2021, the issue price first was USD 8.50, closing at USD 8.54. The share turnover rate was as high as 50.23%, indicating that more than half of the investors are unwilling to hold it for the long term.

Founded in 2017, Energy Monster has grown into an industry leader in only two years. In 2020, it occupied the top place in the sharable charger market, with a 34.4% share. By the end of 2020, Energy Monster had built a widespread network with more than 664,000 point-sites equipped with more than 5 million sharable chargers and attracted more than 219 million users. The company, together with Jiedian Technology, LaiDian Technologies and Yidianyuan, has formed an oligopoly market in China's shareable charger industry.

The company is positioned within the industrial chain's downstream, and its cost-side financials are easily affected by the situation around the upstream raw materials and midstream battery manufacturers. With the development and penetration of more energy-demanding 5G smartphones in China, the need for shared charging equipment is increasing, serving as a catalyst for the new industry. According to a report by iResearch, China's shareable charger market reached CNY 9 billion in 2020, which has significant potential: the researcher expects it to grow to CNY 106.3 billion by 2028 with a CAGR of 36.2%. Meanwhile, the competition is getting more intense, as all the top players are expanding their networks and food delivery giant Meituan is heading into the sector.

The management team of the company has a rather strong background in the Internet industry. CEO Guangyuan Cai was the marketing director of Uber Shanghai; COO Peifeng Xu previously served as a manager of Meituan; CMO Yaoyu Zhang previously worked in Uber. From the ownership structure perspective, before the IPO, Guangyuan Cai, Peifeng Xu and Yaoyu Zhang held 6.6%, 4.6% and 1.2% shares respectively. A list of its corporate backers is impressive. Alibaba is the largest institutional investor, holding 16.5% of the company; Hillhouse Capital holds 11.7%; Shunwei Capital holds 8.8%; China Ventures Fund holds 7.7%; Xiaomi holds 7.5%. 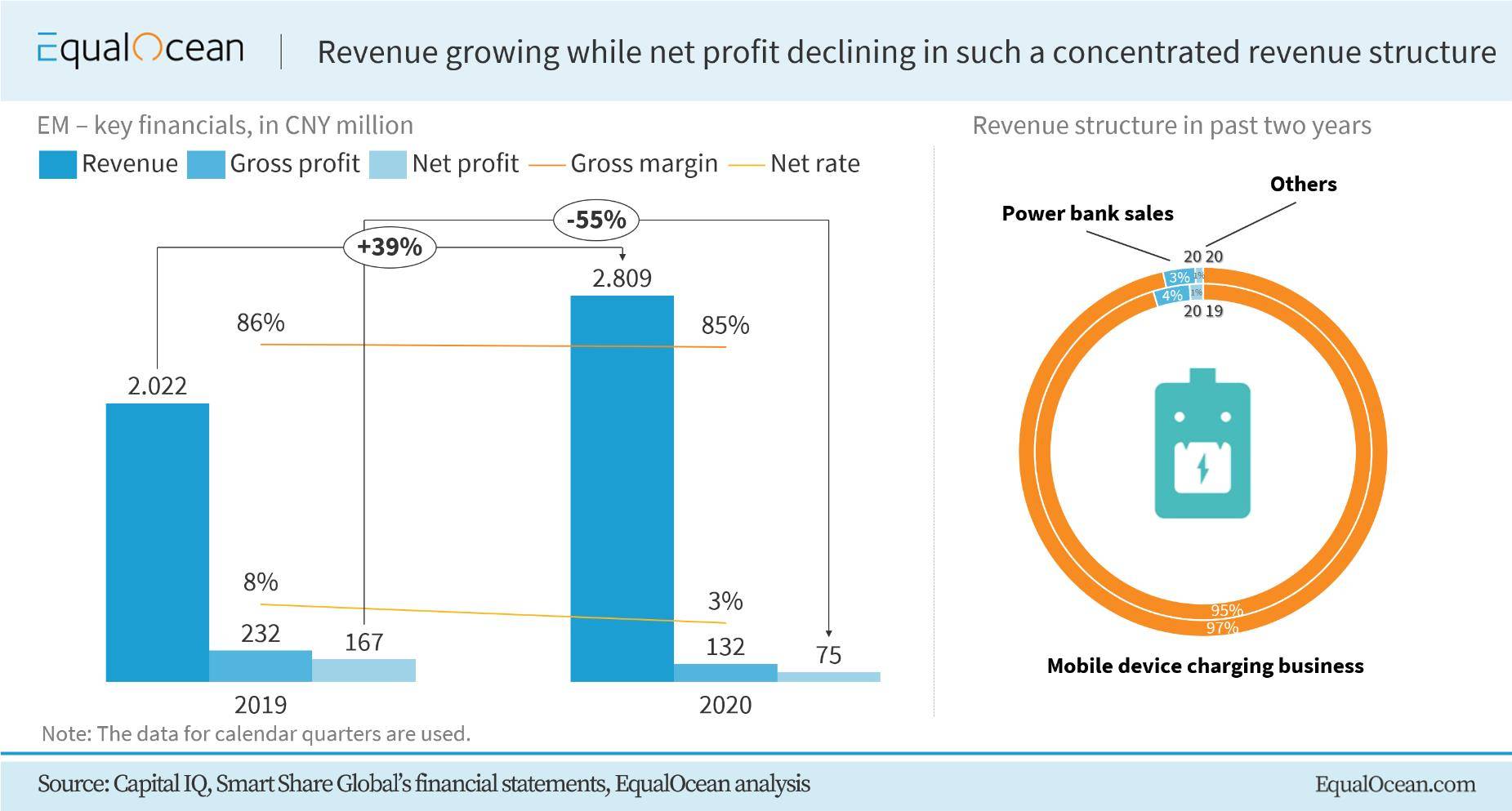 It is estimated that the annual revenue of each power bank is CNY 524. At the same time, the company's profit from this is typically as low as CNY 14. Low-profit margin seems to be the bottleneck of Energy Monster and even the whole industry. Energy Monster's revenue structure is highly concentrated, which mainly comes from mobile charging services, accounting for 95.2% and 96.5% of its revenue in 2019 and 2020 respectively. Being concentrated in a low profitability business may become a risk point for the company. However, it is worth noting that EM is the only one to make profits for two consecutive years in the Chinese market. The fact that a company active in the offline economy remained profitable in 2020, a year which was so seriously affected, proves its market position.

A significant advantage of the company is its market share. According to its prospectus, in 2020, Energy Monster will occupy 33.3% of the market, ranking the top, while Yidianyuan, Jiedian Technology, LaiDian Technologies and other companies occupy 22%, 17%, 10% and 17% respectively. 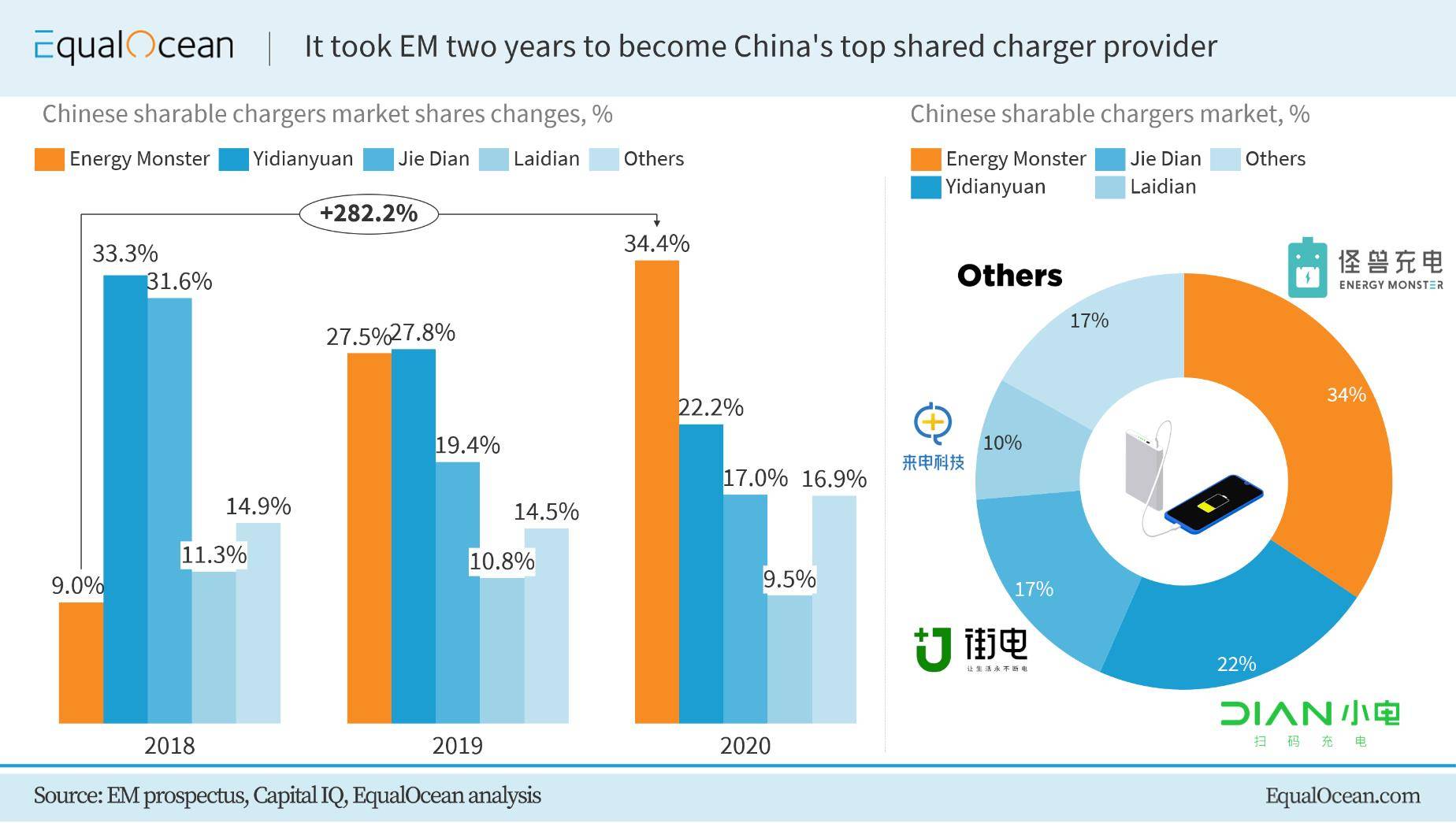 Energy Monster focuses on accurately finding high-frequency utilized points of interest (POIs), making sure that each POI contributes real income. In contrast, other shareable charger companies put more effort into marketing and aggressive expansion in the initial development stage. The company targets not only the popular food and tourist attraction POIs, such as KFC or Seafood Palace but also public places with dense traffic flow such as transportation hubs and hospitals. In a word, forward-looking strategy and efficient management have become the key for Energy Monster to achieve a virtuous cycle of operation.

Although the market share of Energy Monster is now the largest among its peers in China, the company still faces some challenges. First of all, in this nascent segment, a high market share does not mean a high pricing power. On the one hand, the profitability of this industry is dependent on downstream businesses, which means the cooperating vendors tend to choose the brand that can pay higher commissions and entry fees. This deteriorates the situation of price competition in the industry.

On the other hand, the shareable charger industry is based on offline traffic – their clients care more about the convenience and rental fees instead of the brand. Therefore, although almost all the shareable charger companies are jacking up their fees, they are anxious because high rentals may easily push clients to competitors. Moreover, considering that there are almost no technical barriers for power banks, a fierce price war has persisted ever since.

Besides, patent competition and legislation risk are also noteworthy. According to Leida Finance, a popular finance WeChat public account, the number of patents applied by Energy Monster (29 records) is small compared to that of the other top players in the space: LaiDian Technologies, Jiedian Technology and Yidianyuan have registered 202, 94 and 42 patents respectively. Although the technical threshold for sharing power banks is low, it is easy to cause patent lawsuits.

EM's comparable ratios have moved to a low level after the IPO boost (P/S is around 0.4x, and EV/EBITDA is around 12x). Further considering its opportunities and threats, we are quite optimistic about the company's potential. We believe 15x EV/EBITDA is a reasonable target for the next 12 months.

Based on the problems the company is facing, we analyzed several measures that the company can take to break through. First, to address the impact of emerging quick charging and large capacity batteries, develop shareable chargers based on charging capacity. This may also relieve the occupancy rate of power banks, embracing quick charging technology in a short time, and reaching in-depth cooperation with mobile phone manufacturers. Second, develop other business models to refine its revenue structure, which the company seems to be already doing. It entered the Chinese wine market with the brand 'Kai Huai' in 2021, which may offer advertising positions for its charging business. Third, small-town and rural markets are the key. In 2020, the penetration rate of the first and second-tier cities reaches 19.1%, and that of the third-tier cities and below reaches 3.7%. iResearch predicts that by 2024, these two figures will reach 45.5% and 39.4%. Whether the company can seize this opportunity will determine the future development of the shareable charging industry.