The NYSE-listed company registered for an IPO on the Star Market at the end of May 2021. 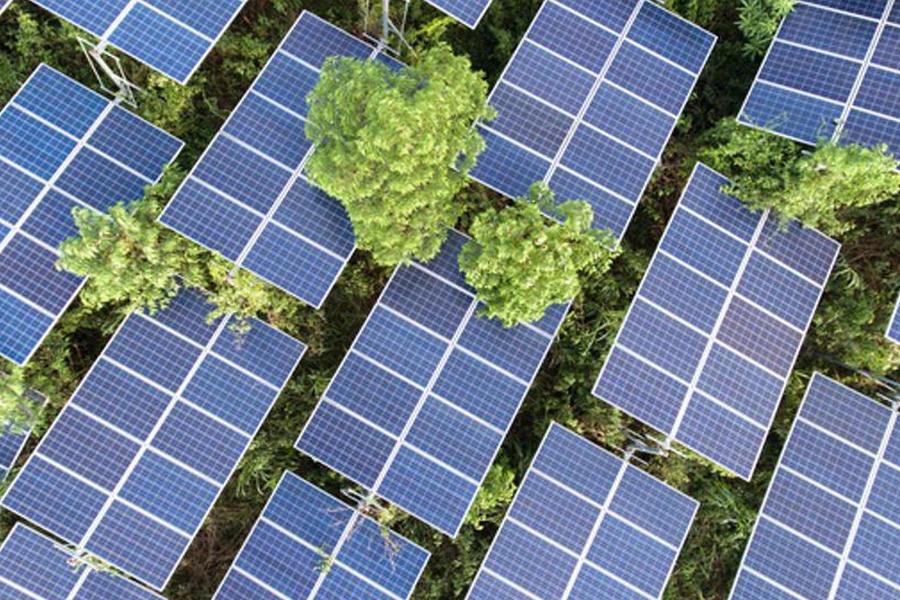 ● Daqo New Energy's profitability has been relatively unstable over recent years, while its sales have been increasing.

● To improve its competitiveness, the company decided to lower expenses and enhance product quality.

● External opportunities will exert a positive effect on the firm, including rising prices of polycrystalline silicon, increasing global need for solar energy, and other policy benefits.

The recent downfall of the solar panel sector has aggravated the stock market unnervingly  since the beginning of 2021. Some of the solar-related stocks dropped below a 200-day moving average. Daqo New Energy's shares have also been adversely negative, decreasing by approximately 40%.

Daqo New Energy was founded in Xinjiang in 2011. After a nine-year development, the firm completed its 4A project operation, with the total production capacity reaching 70,000 tons. Specifically, the firm specializes in developing and producing polycrystalline silicon, accounting for a 16.5% market share in the production chain of silicon materials.

As a leading silicon material firm, Daqo New Energy's sales volumes have presented a dramatically increasing trend after establishment. To be precise, the company had the highest YoY growth rate in 2020 for  96.31% while gaining sales volumes of about 74,811 metric tons. Although its revenues have been  increasing from 2014, its gross margins were fluctuating. This might be due to its changeful average selling prices (ASPs) affected by the industry. 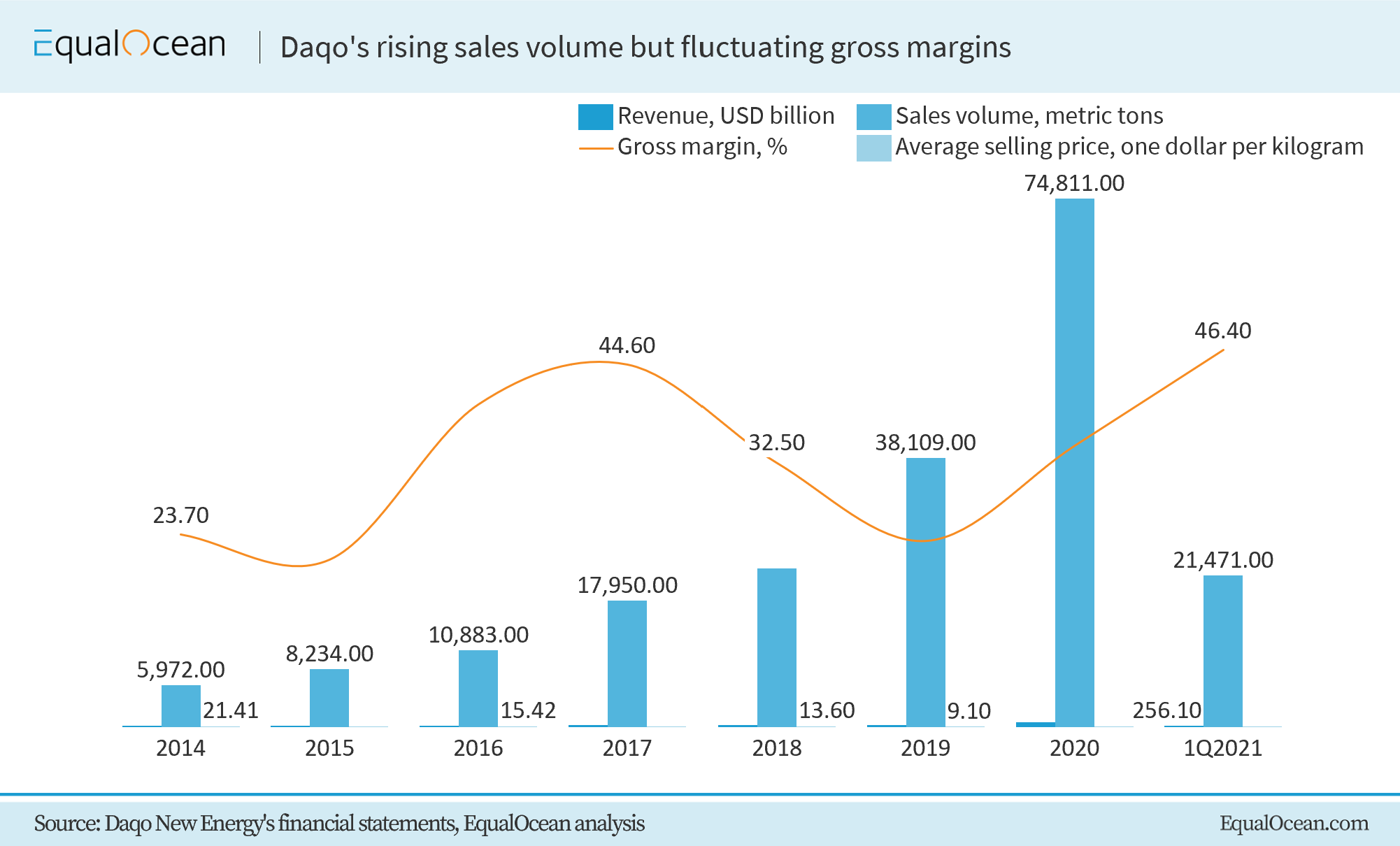 To cope with the intense competition in the polycrystalline silicon industry, this silicon material firm focused on two aspects to enhance its competitiveness. The first demonstrates its cost and price advantage. After setting up, the firm aimed at creating affordable products to offer to its clients. As a result, its average production prices have been in a downward trend since 2014, and eventually lowered to USD 5.85 per kilogram in 2020.

While decreasing its product prices, the firm still improves its product quality. In detail, Daqo New Energy strictly monitors the process from raw materials procurement to production and delivery, and testing inputs in each stage. By the end of 2020, it owned over 30 process improvement projects to improve its polysilicon manufacturing process. Furthermore, it received ISO 9001:2008 certification for its quality assurance system.

Apart from the above efforts, Daqo New Energy also benefits from three external factors. First of all, The public's growing need for polycrystalline silicon is ever-expanding. Although the domestic proportion increased from 64.1% in the mid-2019 to 81.47% by 2020's same period, there still was 20% left with import volumes, indicating other rooms for domestic alternatives. In other words, the domestic supply was still lower than the domestic need, serving as a boost engine for raising polycrystalline silicon's price. The silicon material firm will also gain profits from this rising price trend. Secondly, there is an increasing global need for solar energy. Due to the adverse effects of global warming and COVID-19, solar power appeals as a green investment opportunity for global investors. As a leading raw-material provider within the solar energy industry, Daqo New Energy has been taking the lead in China, in which annual demand for solar energy is expected to exceed 70 GW in the future.

Last but not least, policy benefits swing Daqo into an upper hand position. To complete carbon neutrality before 2060, the National Energy Administration in China is actively promoting photovoltaic power generation this year, which occupies 11% of the whole. Under this situation, China Photovoltaic Industry Association (CPIA) is expecting a dramatic increase in the photovoltaic industry's installed capacity. Specifically, China will install 123 GW  by 2025. Silicon materials are important to the upstream of the photovoltaic industry chain, giving Daqo New Energy more room for development. 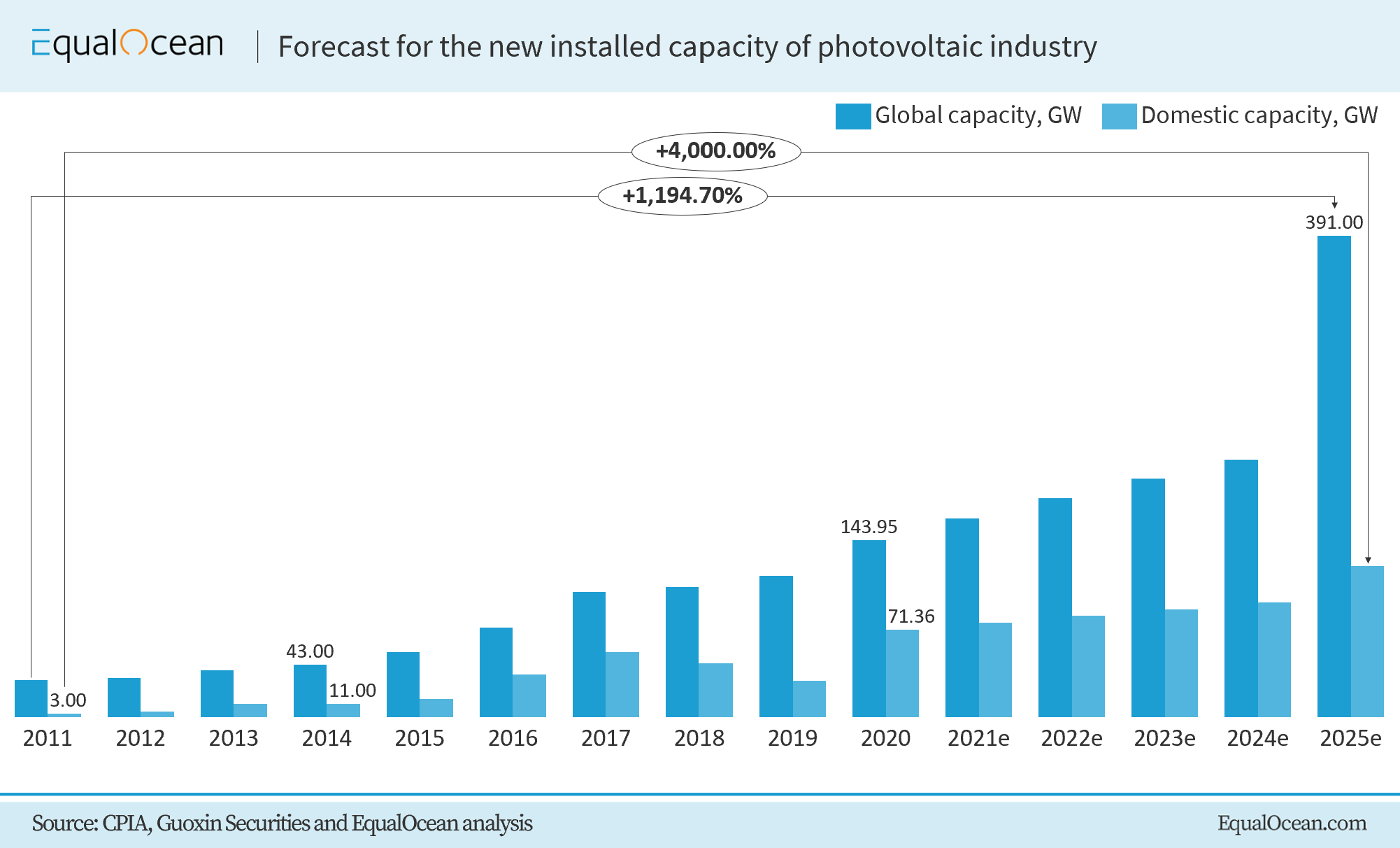 One of the top ten leaders in the industry

At a global stage, the company's production was comparatively stable from 2017 to 2020, hovering around the top five and top six among all companies in the world. However, compared with Zhongneng Technology, its production was still lagging behind, indicating more room for development. 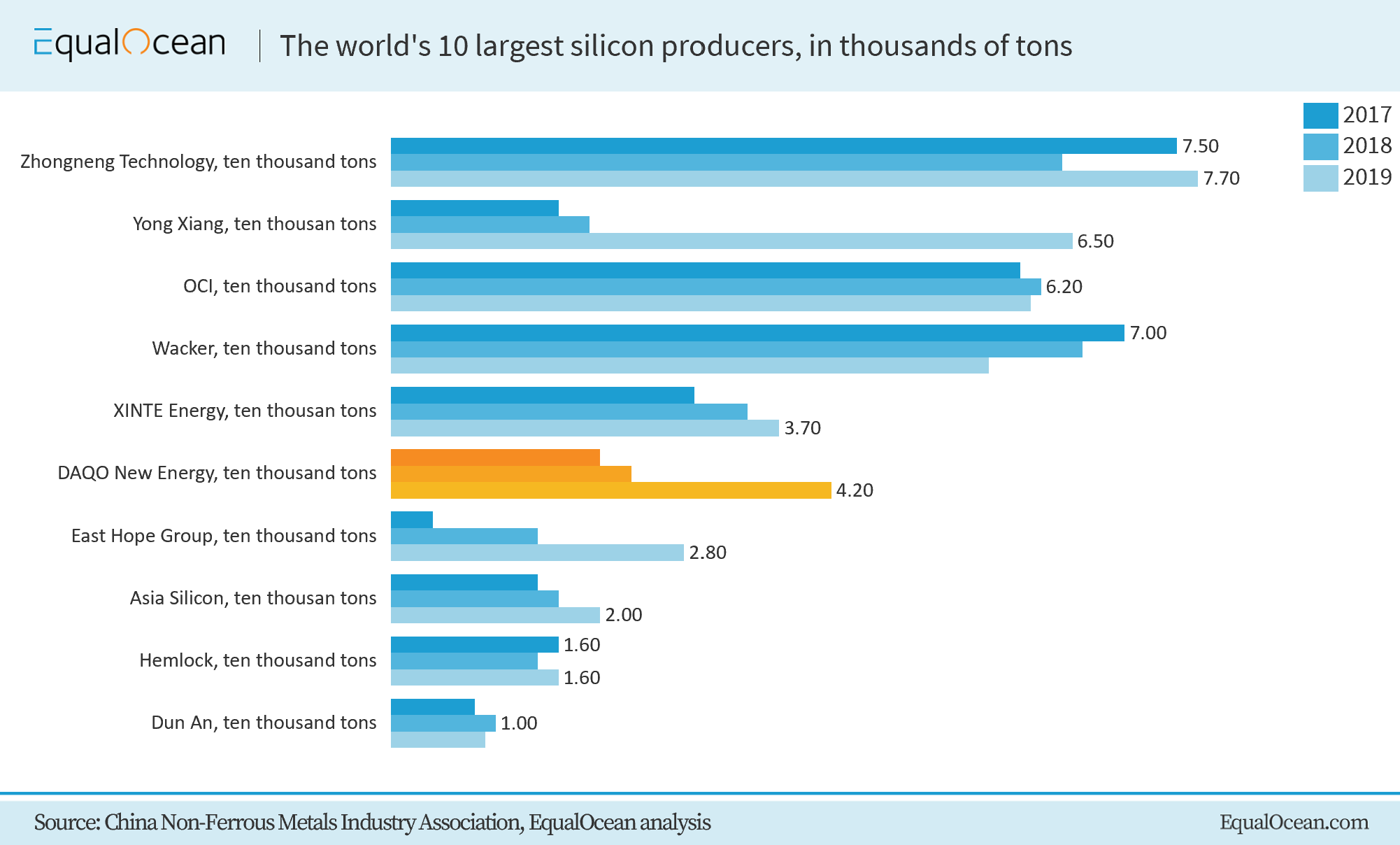 Except for the above factors, the company also has three risks. First of all, lower prices for monocrystal silicon and polycrystalline silicon will hinder its future development. Recently, China's silicon industry's average selling prices have been dropping, moving lower than imported silicon prices. As a result, Daqo New Energy's ASPs were also lower than the current market price.

Thirdly, the risk of taking back subsidies from electricity prices. Due to the more extended period of closing an account, there is always a delay from China's Ministry of Finance's new energy subsidies. This situation will further affect the power generation enterprise's cash flow, harming the actual investment result.

As the photovoltaic industry has been rapidly evolving, Daqo New Energy has caught this headwind and continues to grow. Furthermore, the company's self-improvements have ensured it maintains a good rank globally. Although there still are some risks, they are not likely to severely affect the silicon material firm's business.

CONTACT US
Scan QR code to contact us for professional consulting services
Next article
China's SaaS: An 'Open Ocean' Up Ahead