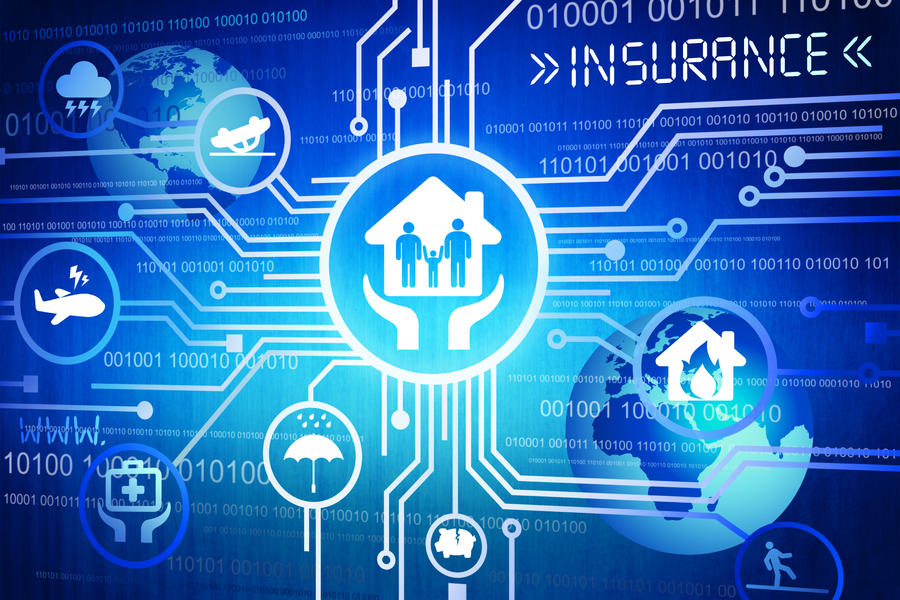 The year 2021 turned out to a positive year for China's insurtech industry, where gigantic demand stems from enhanced popular health awareness, growing individual wealth, and – more importantly –rapid digitalization. The market has grown consistently; in 2021, the global insurtech venture witnessed an all-time high of 566 deals and USD 15.4 billion in the amount raised, showing an increase of 21% and 90% over 2020, respectively, CB Insights said. 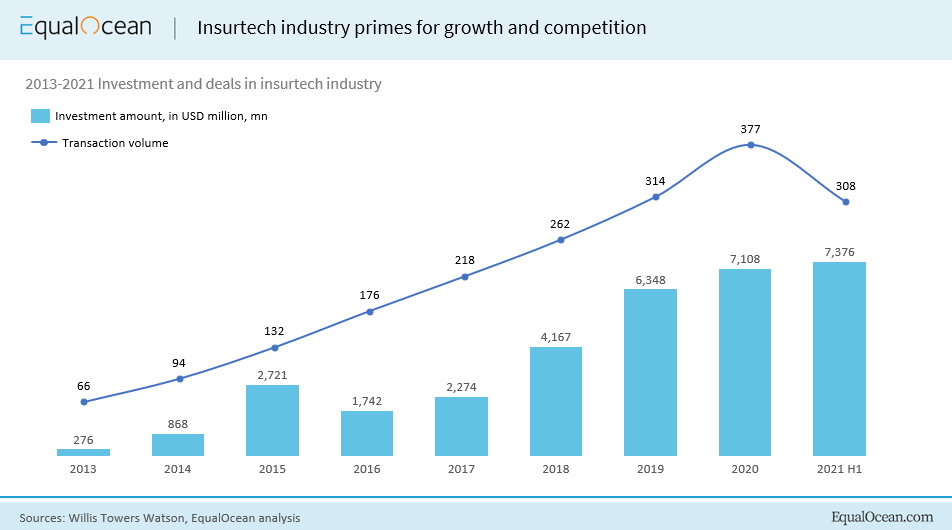 In fact, both the funding and transactions have been steadily climbing since 2013, according to Willis Towers Watson, the third-largest insurance broker in the world. Against this backdrop, the domestic insurtech market also has recorded strong growth.

We select 10 representative Chinese insurtech companies that have received investment in the past year, and will set out to analyze in this article their outstanding capabilities and future prospects.

* All companies are arranged in chronological order of financing.

The cross-border e-commerce market received considerable attention in 2021, and the market segment Dowsure is targeting has huge potential and scale.

Founded in 2016, Dowsure (Chinese: 豆沙包) is the first domestic online insurance platform designed exclusively for cross-border e-commerce. By leveraging its competence in big data, machine learning and blockchain, this six-year-old startup launched a series of inclusive financial products such as TrustSure, LogiSure, CreditSure, BondSure, SellSure and BuySure, committed to better protecting/insulating sellers from risks and losses.

In 2020, it forged strategic partnerships with eBay, Amazon, Lazada, Rakuten (Japan’s top online retailer) and so on. According to public sources, Dowsure has already partnered with over 800 merchants of all types worldwide, completing over 10 million transactions.

Moreover, Dowsure has worked with dozens of Chinese banks since 2019 in providing innovative lending solutions for the e-commerce industry. It has entered into cooperation with LianLian, PingPong, WorldFirst, Lakala Payment and NetEase since May 2021, and after eight months of operating the lending business, the company has facilitated more than CNY 35 billion in GMV for Chinese sellers on the Amazon platform.

With the promising prospects, Dowsure has also become a darling of venture capitalists. On February 22, 2022, this Shenzhen-based insurtech startup closed its USD 20 million Series B financing round, led by an undisclosed global top-tier strategic investor. Firms such as VenturesLab, Qianhaiyifang, and existing investor Plug & Play China also took part in the round.

Since its founding in 2017, AIX has been targeting non-standardized customers – people who have chronic diseases like diabetes and hypertension. In fact, those sub-healthy people who have long refused to be insured are becoming new targets for insurers in recent years: Waterdrop Inc (WDH: NYSE), Huize (HUIZ: NASDAQ) and a bunch of other online insurance platforms have already started to branch out into in this relatively untapped market.

According to China Health Care Association, over 70% of the country’s population is in a state of sub-health; and this proportion is still on the rise. Beijing tops the list at 75.30%.

On February 21, 2022, AIX closed its Series A++ funding round with Zhuhai Rongqian, a venture fund focused on technology startups within the healthcare industry, Shenghui Investment and undisclosed industry investors.

In August 2021, Shangyong Technology (Chinese: 商涌科技) announced the completion of its Series C funding round worth hundreds of millions of yuan. This round was led by China Merchants Health; another popular medical investment institution Marathon Venture Partners also poured money into the deal. FZ Capital acted as the financial advisor for this round.

Founded in 2017, the company positions itself as a one-stop risk management platform for both insurers and consumers. The company has previously received a combined funding of over CNY 100 million from Matrix Partners China, Qianhai Reinsurance, Gopher Asset Management, CRCM Ventures, Mount Morning Capital, Invention Capital and Cloud Angel Fund.

The company’s business scope mainly includes pre-risk control and product customization, with its main intelligent risk control product being "Xinji Baobei" (Chinese: 新机保贝) and a hospital cash product that it delivers via a medtech app.

At present, the company has established partnerships with more than 70 insurance companies and platforms; it has issued more than 12 million policies covering the underwriting and risk control services.

Founded in 2015, 17doubao.com (Chinese: 豆包网) was one of the first insurtech service providers in China to launch a SaaS cloud platform. It received its Series D funding for nearly CNY 100 million in August 2021 from existing investors Bojiang Capital and Shangshi Fund; the company has raised CNY 235 million in the previous five rounds of financing.

The digital insurer handles data mining, digital SaaS solution, customer service, claims handling, intermediary management and employee benefits solutions. According to 17doubao.com, it has already served about 20 million clients with a combined value of over CNY 237 million; the number of contracted institutions and third-party agents has topped 1,265 and 542, respectively.

In early 2019, 17doubao.com extended it reach into the overseas insurance market and in April of the same year, EasiTech Co., Ltd, its international arm, was officially established in Hong Kong, with the city being its bridgehead in the quest to globalize its operation. EasiTech's current international client base is in Hong Kong and Southeast Asia.

DouBao Digital Cloud, EasiTech and Ignatica – a Hong Kong and Swiss company backed by US-based SOSV Investment Fund –inked a deal in December 2020 to jointly craft a new platform that will tap the full potential of the Asia-Pacific region's burgeoning insurance sector.

Founded in September 2015, Dayu Tech (Chinese: 大鱼科技) is an insurtech company which claims to be the only one that could offer services to insurers, agents and also customers.

On 19 May 2021, Dayu Tech announced that it had received a Series B funding round from Xiaomi Group (1810:HK), a Chinese consumer electronics and smart wearables manufacturer. The proceeds will be used for further technology development and team expansion.

Yuanbao Insurance is a licensed insurance broker officially in operation since 2020. As of May 2021, the insurance intermediary platform had served millions of paid users in over 90% of cities and regions.

Within just one year of its launch, this “black horse” completed a Series C funding to the tune of CNY 1 billion, setting a new record in funding amount for the whole industry. This round was led by Source Code Capital and also backed byCathay Capital and existing investors including Hike Capital, Northern Light Venture Capital, Qiming Venture Partners and SIG Capital. Thriving Capital served as the exclusive financial advisor.

Waterdrop Inc. (WDH:NYSE) (Chinese: 水滴公司), a Tencent-backed Chinese online insurtech company as well as a crowdfunding platform, has been a favorite of the capital market since its establishment in 2016, completing six rounds of financing for over CNY 4 billion within four years. 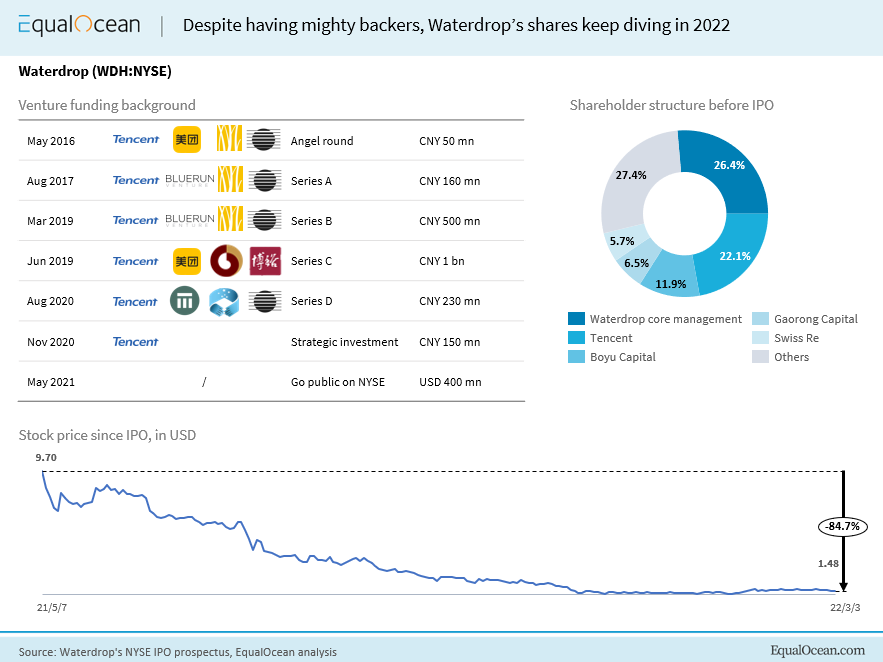 Waterdrop faces challenges on multiple fronts, especially after the regulatory crackdown on the mutual aid industry that led to the permanent shutdown of one of its core operations; the widening losses also sparked heightened investor concerns. After a volatile year for Waterdrop and the entire insurtech industry, we expect to dive deep into its yearly performance report to see if the Q4 2021 results would end a year’s ups and downs on a note of relative optimism.

Check out our previous article about Waterdrop:

It claims to have served more than 150 million individual users in China and 12,000 enterprise customers, including Missfresh (MF:NASDAQ), Matrix Partners China, and Maimai, China’s biggest rival to LinkedIn.

Baozhunniu grabbed its Series C1 financing round led by Ally Capital and Huazhi Capital in May 2021. The latter was also the Series C investor for Leapstack, an insurtech company focusing on health insurance risk control.

Xiaoyusan (Chinese: 小雨伞) was established in 2013 as an online insurance aggregator and has been recognized by the capital market since its inception. It roped in big-name investors like Sequoia China, Matrix Partners China, Tasly Capital and AV Capital. In March 2021, it received a Series C round of financing led by Gopher Asset Management for an undisclosed amount. 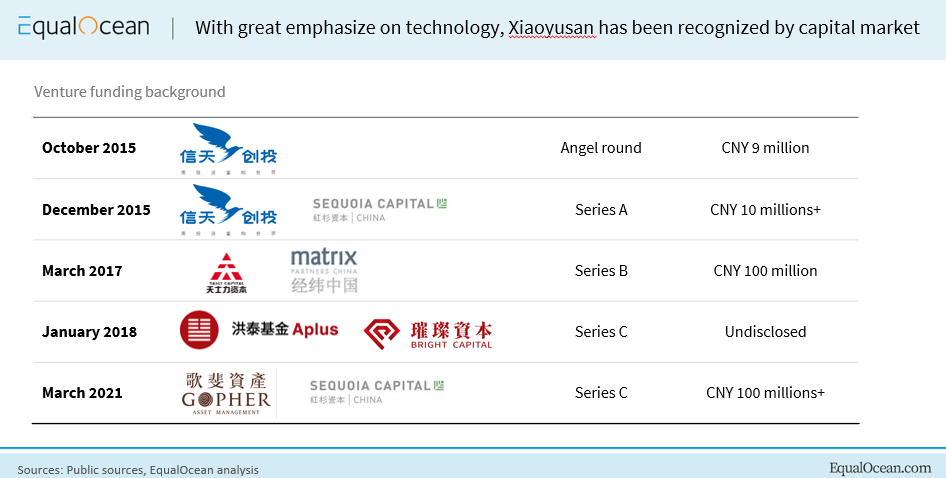 It has independently developed a number of AI technologies to shorten the decision-making process for users and solve their problems on all fronts. With its strength in technology and services, Xiaoyusan has entered into strategic partnerships with over 80 insurers to launch products that better meet users’ needs. Its term life insurance product "Optimus" and another critical illness insurance product named "Super Mary" were once a hit in the life insurance market.

Disclaimer: This article's content is intended to be used solely for informational and educational purposes, and not as investment advice. Always do your research and consider your personal circumstances before making investment decisions. EqualOcean is not liable for any losses that may arise from relying on the information provided.