The company's widening losses come along with the user base expansion. 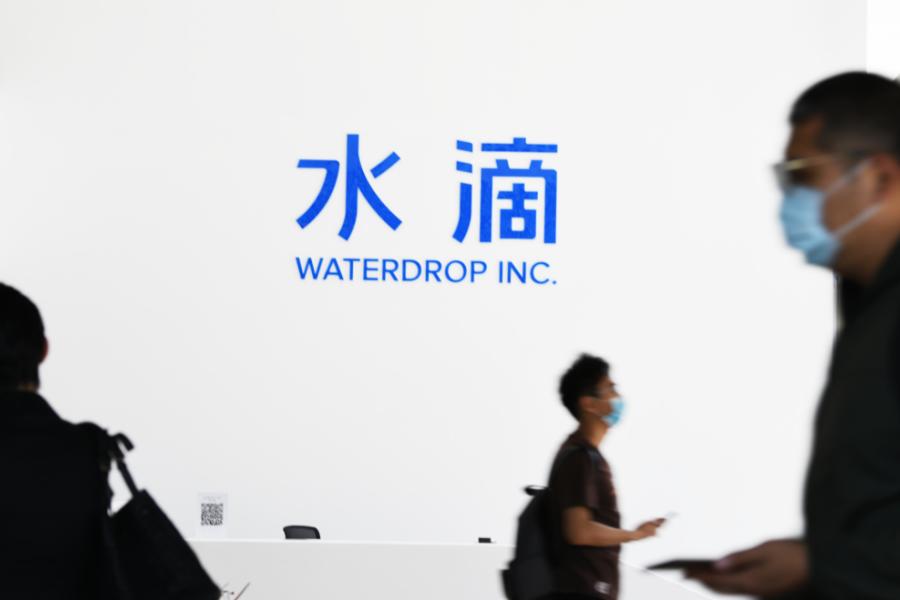 Waterdrop Inc. (WDH:NYSE), a Tencent-backed Chinese online Insurtech company, as well as a crowdfunding platform, released its Q2 2021 financial report on September 8. It has consistently attracted international attention since going public this May.

One of the leading insurers in sales innovation, Waterdrop has been favored by the capital market since its establishment in 2016, completing six rounds of financing for over CNY 4 billion in 4 years. The company's current market value is merely USD 973 million.

Despite a great deal of attention from investors, Waterdrop has been performing poorly. Since debuting on the New York Stock Exchange at USD 12 per share on May 7, 2021, the price of the insurance technology platform has been slumping dramatically. On October 8, the closing price was only USD 2.47, tumbling almost 80% in two quarters. The company has seen an increasing net loss: it was CNY 655.8 million in Q2 2021 versus just around CNY 19,000 in the same period of 2020.

In addition, the policy crackdowns and industry overhauls also count. In an interview with Reuters, Peng Shen, founder and CEO of Waterdrop, expressed the intention to focus more on user growth instead of prioritizing profitability, at least in the short term. In opposition to increasing net losses, the company has a surging growth in operating revenue, which reached ten times the 2018 figures in 2020. The company generated CNY 3.03 billion (USD 464 million) in the first half of 2021, surpassing the all-year-round revenue in 2019.

The commission fee paid by insurance carriers is cited as the main booster for Waterdrop's improvement. As of December 31, 2020, the company had collaborated with 62 insurance carriers to offer health and life insurance products online, among which Anxin Insurance (19.9%), China Taiping Insurance (24.9%) and Hongkang Life Insurance (11.1%) are three major contributors in terms of percentage to total operating revenue.

On the other hand, the company's net loss topped CNY 1.02 billion for the six months ending June 30, 2021, which was almost equivalent to the previous three years' sum. The soaring sales and marketing expenses, especially the expenses on paying third-party user acquisition channels marketing fees, are deemed as the core factors, accounting for nearly 70% of the total operating costs and expenses. In 2020 only, the marketing services fee paid to Tencent reached CNY 187 million.

While the marketing expenditure saw an over 20% growth, the R&D investment kept shrinking to 6% during the period from 2018 to H1 2021. The increasing marketing expenditure reflects the company's ambitious sales goal and innovations, but a lack of focus on product or technological advancement so far. 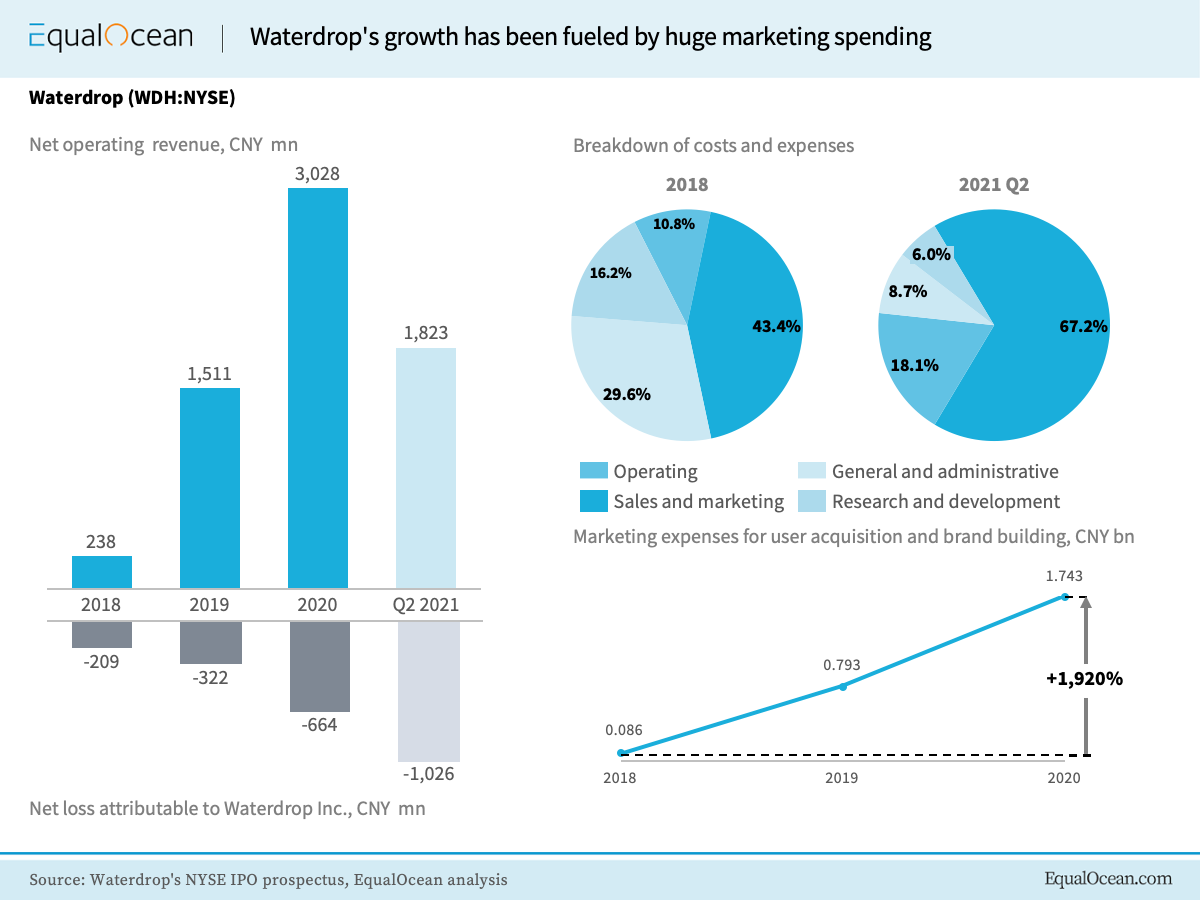 Starting from Waterdrop Medical Crowdfunding and Waterdrop Mutual Aid Platform, the company has strengthened marketing strategies with social attributes. Backed by Tencent, Waterdrop can utilize the huge user base that comes with WeChat and its related ecosystem to further extend business reach to low-income markets (sometimes also the Tier 4 cities and below), a relatively under-explored market. The strong social stickiness of WeChat Moments, QQ groups and other social media enable Waterdrop to gather health-focused people at a lower customer acquisition cost. With the traffic generated by crowdfunding and the public's increasing awareness of investing in insurance, Waterdrop has generated profits in the commercial insurance market, benefiting from the technology-powered scheme. At this point, a complete business closed loop is formed, with three market segments complementing each other to achieve further business growth.

Waterdrop first came into the public spotlight as a crowdfunding platform in July 2016. It enables people to initiate crowdfunding campaigns and share campaign information through social networks. Backed by Tencent and the huge traffic platforms it owned, Waterdrop has received development support and gathered the community with mutual assistance and development.

The company does not charge any fees for crowdfunding campaigns. In other words, Waterdrop has positioned this platform as a charity campaign. It performs the educative role in raising participants' health protection awareness, after which they may seek more comprehensive insurance coverage. This is how its ability to attract traffic works. As of June 30, 2021, approximately 372 million people donated an aggregate of over CNY 42.8 billion to around 2.1 million patients through Waterdrop Medical Crowdfunding, according to the Q2 2021 financial release.

The comprehensive risk management and anti-fraud measures are conducted to protect donors on Waterdrop Medical Crowdfunding, such as rigorous vetting, public disclosure and independent accounts at a custodian bank. However, the underlying trust crisis and the resulting compliance concerns have still plagued the company's next stage move.

Check out our previous articles about China's crowdfunding industry: 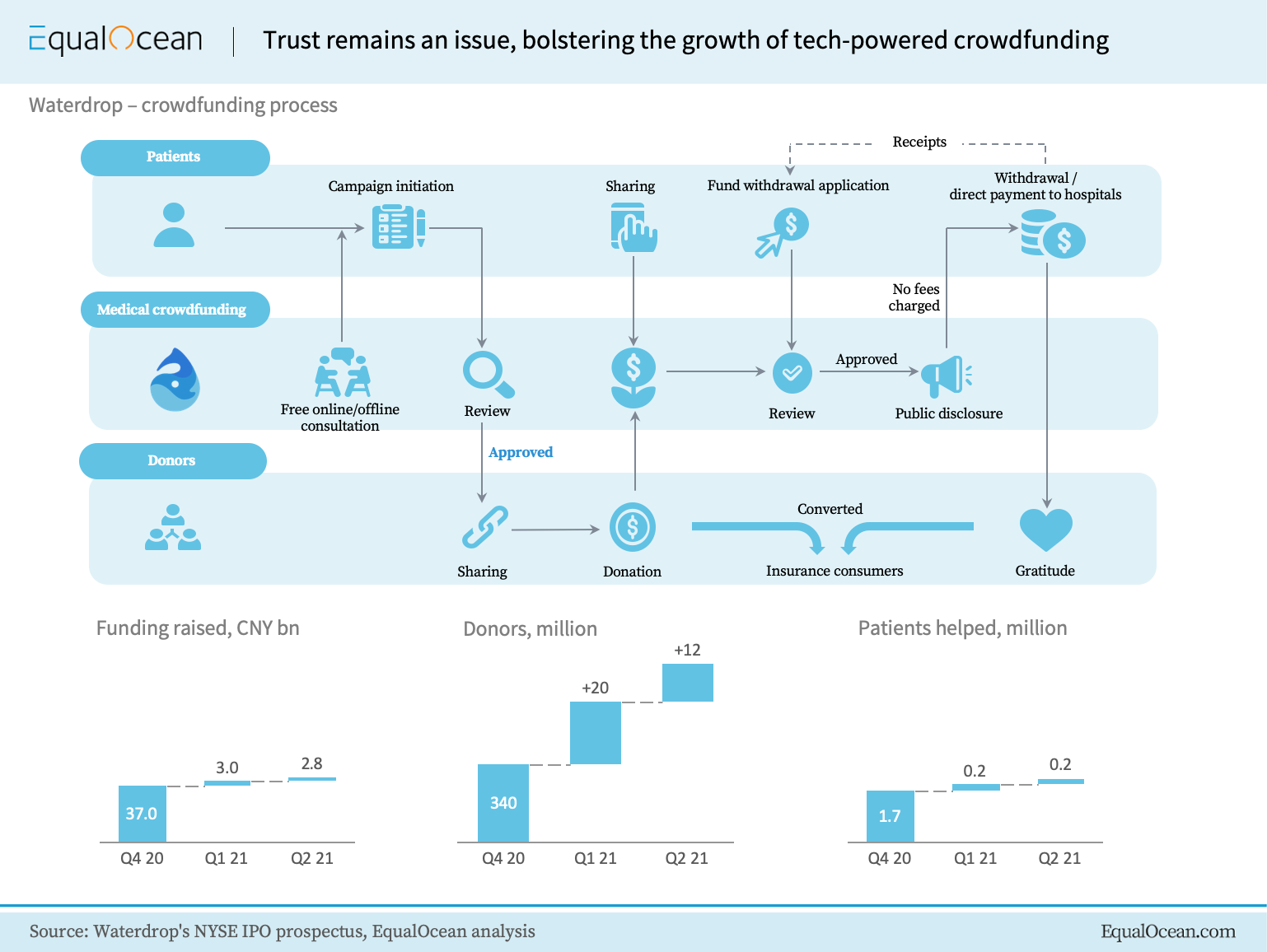 Waterdrop Mutual Aid platform was operated between May 2016 and March 2021 with 12.4 million active participants as of the halting day. With reference to the theory of 'one for all, all for one,' it helps participants ease medical cost burden via a relatively low apportioned amount per capita, while it historically served as a scenario for educating and familiarizing millions of users with the importance of insurance coverage similar as a crowdfunding platform.

However, the story of the network mutual aid platform has been one of riches to rags, following the discontinuation of Meituan Huzhu, Qingsong Huzhu and 360 Huzhubao; the reasons behind it are thought-provoking. The so-called mutual aid platforms have long been in the grey area of online insurance governance, where the moral hazard and adverse selection problems warrant greater emphasis.

Having positioned itself as a charity platform, Waterdrop has benefited from raising money for patients in need. In the previous year, the China Banking and Insurance Regulatory Commission (CBIRC) has tightened the control and defined mutual aid platforms as 'illegal,' further restricting the development of relevant businesses. In addition to the more stringent regulation, the declining users and higher shared amount, as well as the complexity in claiming all accelerate the termination of those platforms.

However, Waterdrop has assessed and concluded that the halting of the mutual aid platform operation is a 'non-recognized subsequent event' given the cessation decision is made in 2021 following recent industry environment changes, which would not have significant impacts from the business perspective as this segment only contributed 3.6% of total operating revenue in 2020. 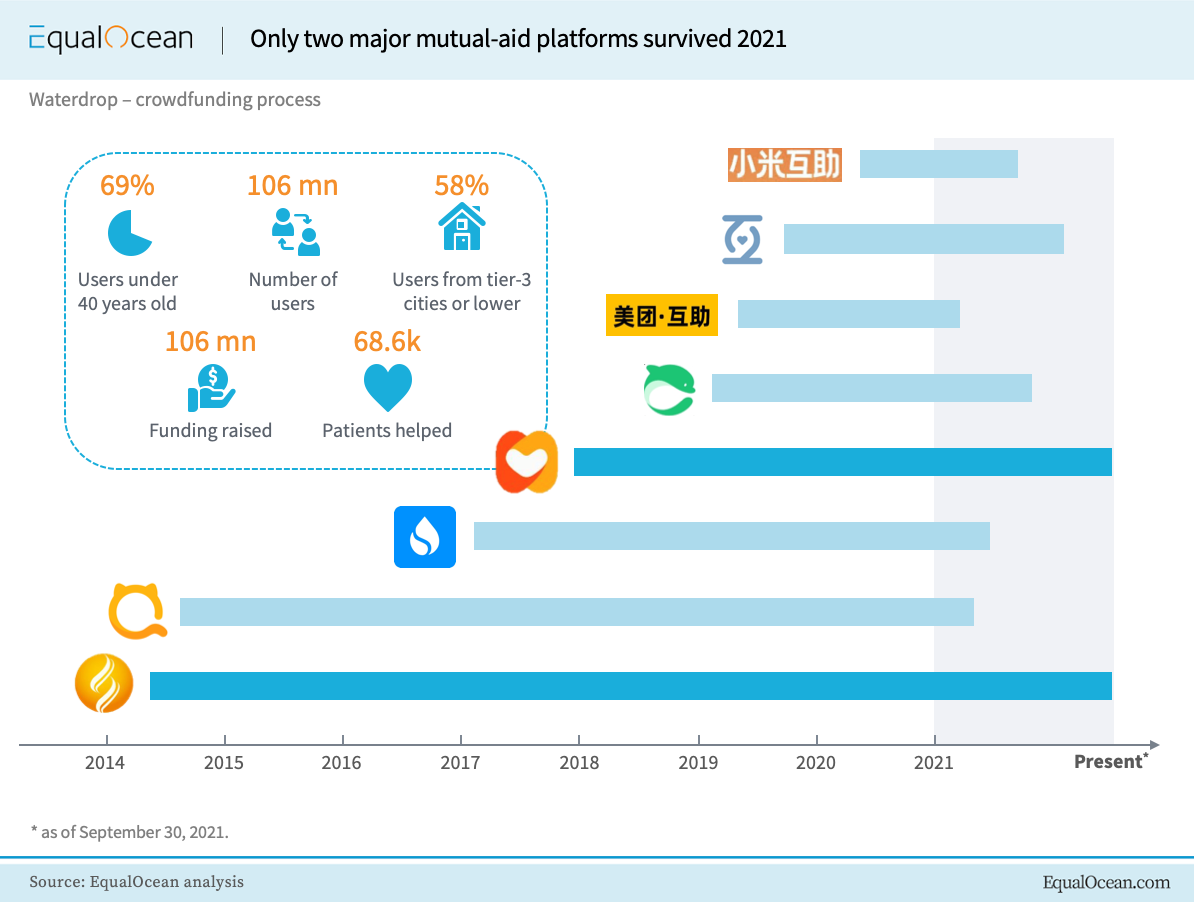 As the core profitable business, Waterdrop's insurance campaign has adopted quick changes and fast development. The cumulative number of paying insurance consumers soared from 1.7 million in 2018 to 19.2 million in 2021, achieving over CNY 14 billion first-year premium (FYP), 13.8 times larger than that in 2018. The FYP generated through the Waterdrop Insurance Marketplace for the second quarter of 2021 reached CNY 5.36 billion, representing an increase of 94.1% year on year. For the upcoming quarter, the company expects the FYP generated through the service to be in the range of CNY 4.3 billion to CNY 4.6 billion.

The comprehensive product offerings increased FYP and broadened paid user base, helping the company to achieve exponential revenue growth. Besides, the company's advanced technology and differentiated data insights are critical to its success. As an insurtech company, Waterdrop leverages online service capability and artificial intelligence to enable effective consumer conversion, providing intelligent underwriting, claim management, risk control and a series of other solutions to its insurance value chain. 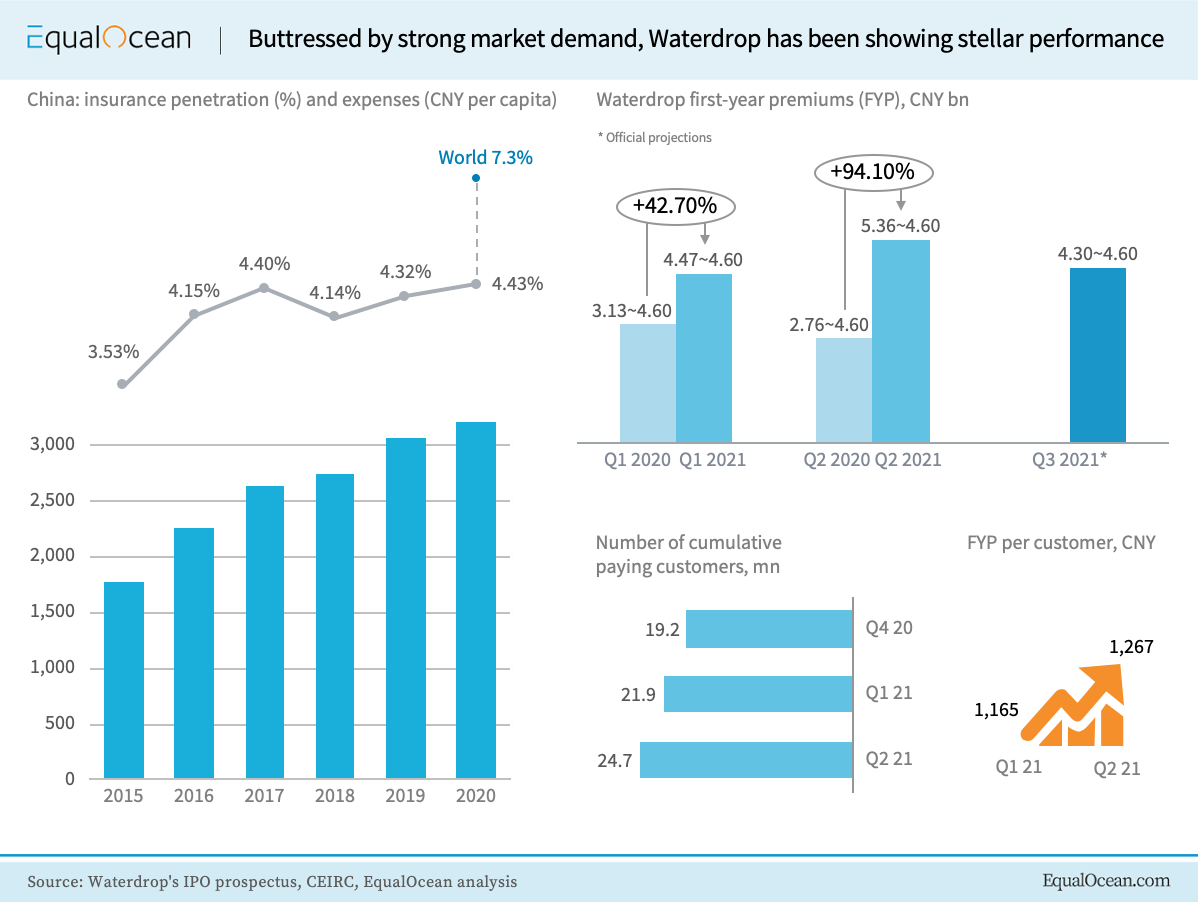 The 'H' in Waterdrop's ticker 'WDH', its health business, was partly attributed to its accumulated data assets through the insurance marketplace, which reduces the customer acquisition cost and thus integrates upstream and downstream resources to reach the healthcare ecosystem. According to the founder, Waterdrop has aimed to become the Chinese UnitedHealth Group, and to expand further into the healthcare industry to achieve a state of diversified income. To be more specific, Waterdrop Health, which provides both basic health management services as well as medical treatment services, is on the right track. At present, top players on this track include but are not limited to Alibaba Health (0241:HK), JD Health (6618:HK), Ping An Good Doctor (1833:HK) and ZhongAn Online (6060:HK) – it was never going to be an easy job for Waterdrop to win.

Waterdrop faces challenges on multiple fronts, from pending regulatory changes that could halt core operations to widening losses. But it is telling a new story to the capital markets: starting from insurance and technology, it is heading towards the prosperous track of building a one-stop 'insurance+healthcare' platform. This path contains sizable opportunities, although Waterdrop’s future may not always be roses and rainbows.