On March 10th 2022, China's largest second-hand 3C (Cameras, Computers, Cell phones) e-commerce platform, ATRenew (RERE: NYSE), released its fiscal year annual report 2021, showing favourable growth and narrowed net losses. This should have been a piece of news to boost the stock price. Nevertheless, it has not changed the situation of RERE's stocks being sold off. In this week, positively affected by the overall rally trend of China Concept Stocks, RERE stocks seems to reach a turning point at the end of this month.  We are going to analyze the reasons behind this and our investment suggestions.

According to the disclosed financial report, the revenue of RERE in 2021 reached CNY 7.78 billion, up 60.1% year over year. In terms of sales scale, its gross merchant value (GMV) reached CNY 32.5 billion in 2021, up 65.8% year-on-year. Meanwhile, in 2021, while the group's revenue and business scale proliferated, its profitability improved significantly. In 2021, after non-GAAP adjustment, the operating loss decreased from CNY 144 million in 2020 to CNY 103 million, down 28.0% compared with the fiscal year 2020. RERE's gross margin increased to 26.3% from 25.7% in 2020, and the non-GAAP fulfilled gross margin (which is defined as gross profit minus fulfilment expenses created by JD.COM (JD), one of RERE's initial investors) increased to 13.4%, from 12.0% in 2020. At the same time, the commission rate of RERE's 3P marketplaces (Paipai Marketplace & PJT Marketplace) has risen to 4.6% from 4.1% in 2020. Another notable thing is that the non-GAAP R&D rate increased by 50.6% YoY to 218 million CNY, which we think is a good sign, especially in the stage of expanding. This excluded share-based compensation expenses amortization of intangible assets resulting from acquisitions. 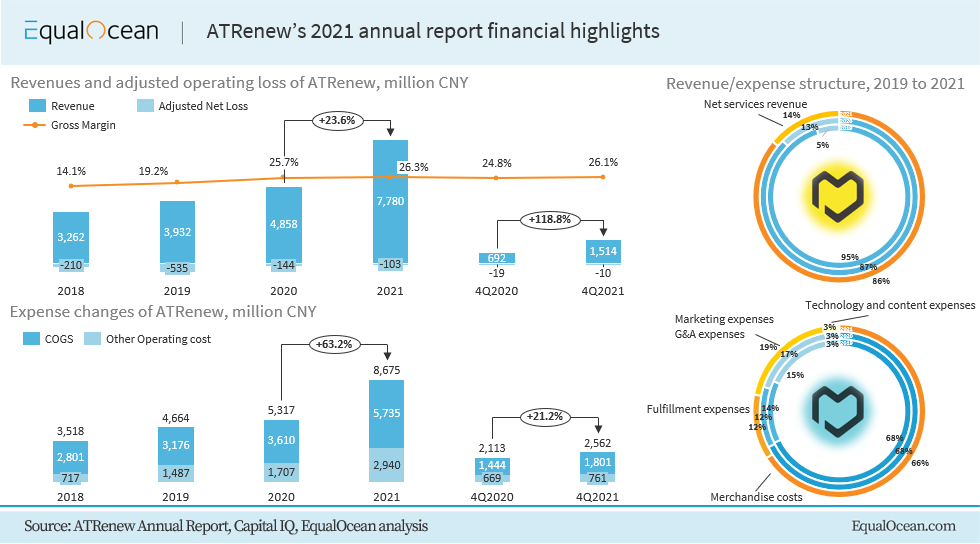 As mentioned in our previous article, a great advantage of the company is that it created a C2B2C model and developed a full-coverage system in the industrial line including recycling, testing, rating, pricing and resale. Recycling of 3C devices (C2B) through trade-in services partnering with JD.com, and fulfilling the orders at offline AHS stores is the strategic core of obtaining products. Then devices will be sold on the B2C retail platform Paipai marketplace, which also undertakes second-hand goods retailed by individuals and merchants. Meanwhile, AHS Device is responsible for the circulation overseas. The company also has a B2B trading platform PJT marketplace, another source of service revenue. 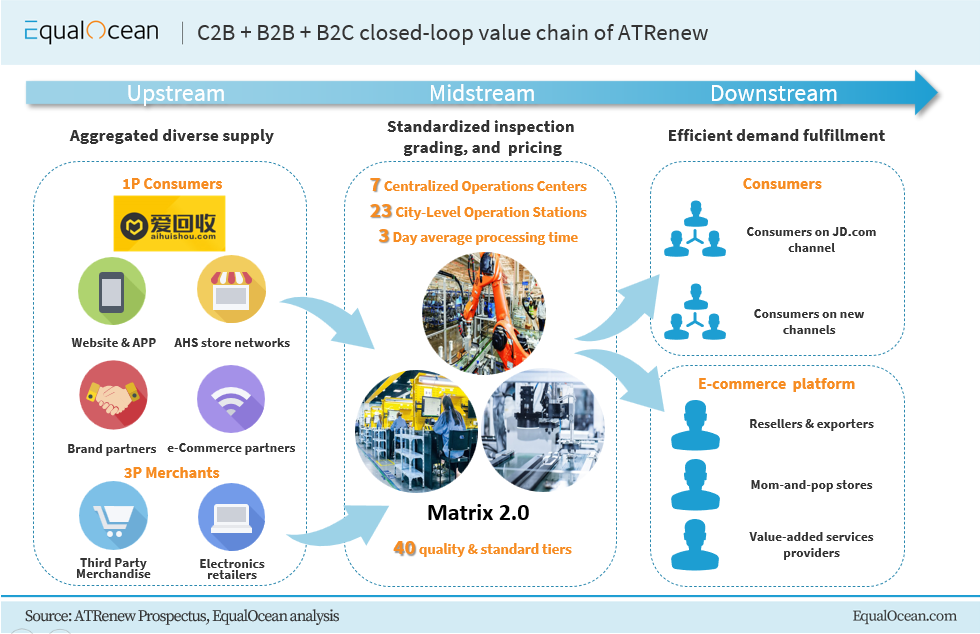 Another significant advantage of the company is the leading digital level in the industry, which is in line with China's industrial development strategy in recent years. A few years ago, the second-hand 3C industry was a typical decentralized and labor-intensive industry relying on experience. As an industry disrupter, RERE built the world's first and the only automatic detection production line system, Matrix 2.0, which includes all the links in this field such as function detection, appearance detection, X-ray fluoroscopy detection, warehousing storage, and outbound packaging. Matrix 2.0 realized an automation rate of 90%, a detecting error rate of less than 0.01% and the workforce is reduced by 40%. In January, to spur the digital economy as a new driver of economic growth, China rolled out a plan to facilitate the development of the digital economy in the 14th Five-Year Plan (2021-2025) period. Considering the major trend of China and RERE's increasing aggressive R&D expense, we think ATRenew has potential and could maintain its role as an industry leader.

We believe that RERE is worthy of investors' attention in the long run with these two advantages. But investors should also note that the company has two significant risks that are difficult to ignore.

According to Kerry (Xuefeng) Chen, Founder CEO of ATRenew, the gross profit margin of the offline traditional second-hand mobile phone industry chain could exceed 50%. In contrast, RERE achieved gross profit margins of 19.2%, 25.7% and 26.3% in 2019, 2020 and 2021, respectively, significantly lower than the traditional competitors. The difference is understandable considering RERE entered the field and improved information transparency and process standardization.

However, it comes to whether the company can develop sustainably. According to its financial data, from 2019 to 2021, the company's net losses were about CNY 2 billion[1]  (without adjustment) accurately. China produces about 400 million mobile phones every year (the most common 3C device category). If the recycling processes of these devices are not standardized and transparent, they will become a disaster area of information leakage, which will affect personal property and reputation, and even cause losses of organizations' and companies' property, patents and technology. This leads to distrust of the market by sellers and consumers, further affecting the business model's sustainability. RERE may likely change its business model more or less to make itself survive. We think the increase in the proportion of the company's commission income in 2021 could be a testimony.

As for external risk, we believe that the sharp decline of the company's share price from last year is due to investors' doubts about its sustainability and the tension between China and the United States and the weakness of China Concepts Stocks in recent years. It is undeniable that the company faces greater cross-board regulatory risks, especially considering its VIE structures. However, RERE has said that the company is ready to accept additional audits or inspections from Chinese regulators and PCAOB. It is worth noting that to ensure compliance with the regulations of China and the United States, the company has specially hired a lawyer for VIE structure issues and comply with the regulations both of China and PCAOB. Meanwhile, the company plans to repurchase VIE companies through its Hong Kong branch. We expect that the company's VIE structural risk will be significantly reduced after internal restructuring procedures. However, before the repurchase, we believe that the tension between China and the United States and the bad impression of China Concept stocks will further negatively affect the stock price. However, it's worth noting that, the Chinese government has been encouraging the development of a sustainable economy in the past decade, and China's 2060 carbon-neutral goal is a good policy for ATRenew. Recently, the Chinese government has indicated that it will increase its economic policy support, and the capital market seems to rebound its confidence. Under such a background, China concept shares have shown a rally trend, which is a good sign.

Considering the current risks faced by the company, it is not easy to make an accurate and convincing valuation of RERE at this stage. Since the company has yet to turn a profit and no Chinese ESG company can be used as comparable companies, we picked nine Chinese E-commerce companies and U.S. second-hand companies and used the Price/LTM sale ratio to do the valuation. The peers we picked included BUY, DADA, EBAY, JD, POSH, REAL, YJ, and YSG. From our analysis and calculations, the average Price/LTM sale of these peer companies is 1.6x, while RERE's Price/LTM sale is 0.6x.

Based on the valuation only, we think it is undervalued at this stage and have a fair price of USD 9.12. However, considering its unneglectable risk currently, we believe it is hard for this stock to reach such a price level in recent several months, and we highly recommend holding the stocks instead of overweighting at the current stage.

Further analyzing the strategies that it may need to adopt, the city-level service integration model, we think, could be the key for RERE to have its edge back. This strategy is to refine the operation, optimize the efficiency and upgrade the management ability, using the city as the business unit. In the first quarter of 2020, we found that the company launched this strategy in 22 pilot cities, 18 of which achieved faster growth and surprised GMV. B2B GMV increased by over 100% in 12 cities, such as Shenyang, Nanchang and Hefei. In 2021, the company opened 576 new stores with a total number reaching 1,308 and outperformed the expectations. The store network covers 214 cities (increased 43 cities compared to the end of 2020), mainly responsible for in-person delivery and fulfilment. We believe the city-level service integration strategy could ultimately help the company break through its current predicament.