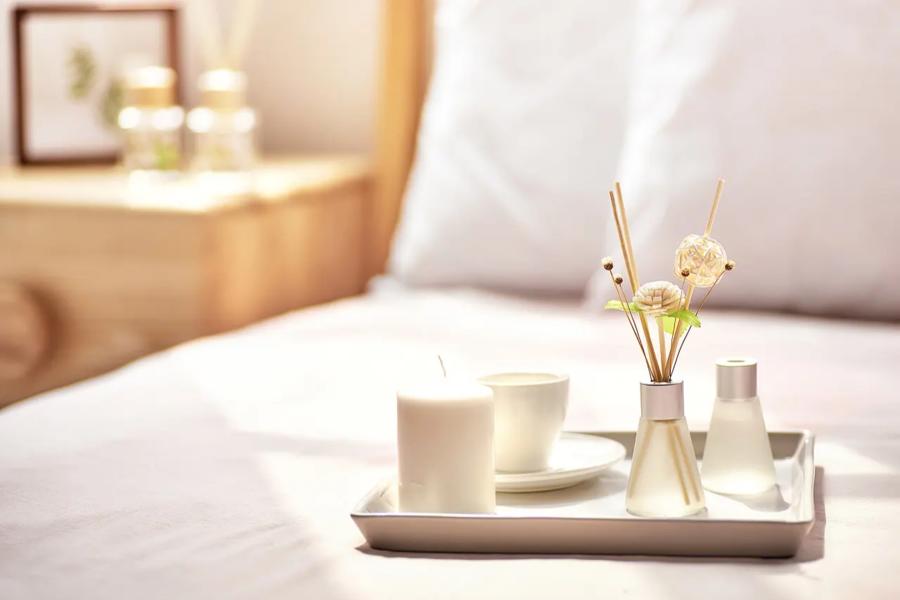 According to data from Euromonitor, the compound annual growth rate of China's fragrance market reached 14.9% between 2015 and 2020, and the figure is expected to jump to 22.5% over the following five years. By 2025, China's perfume sales should reach CNY 30 billion (USD 4.733 billion).

The global fragrance market is expected to grow at just 7% between 2021 and 2025, which indicates the sheer potential of the Chinese market. 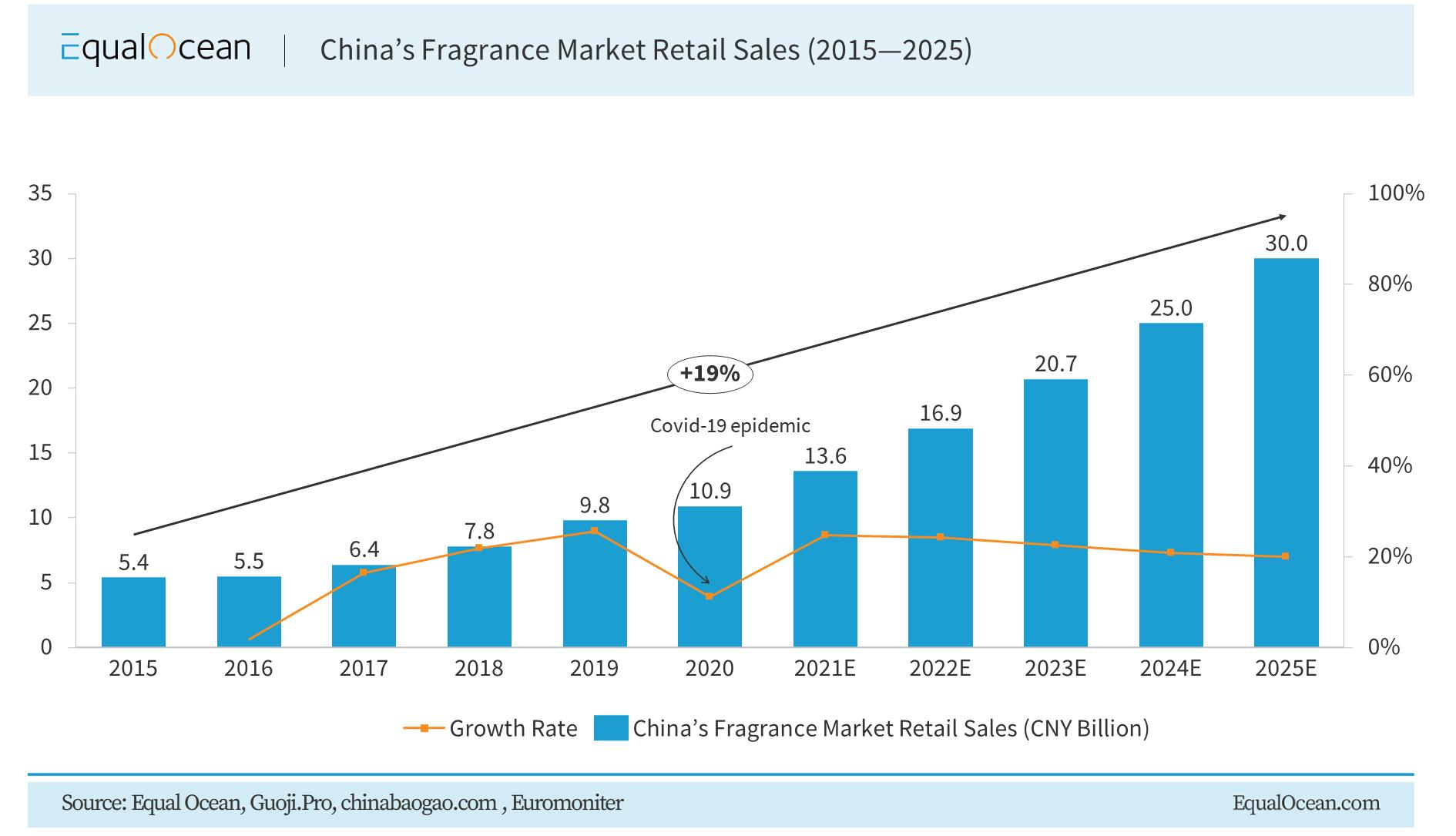 The Covid-19 epidemic, which impacted cargo transport of overseas brands, has given Chinese fragrances a competitive edge, though domestic companies are still not capable of tipping the scale. According to Winshang, an industry data provider, overseas brands accounted for 55% of China's fragrance market, while their domestic peers made up 45% in 2021.

Statistics on Qichacha, a business registration information provider, showed that the number of Chinese fragrance companies spiked around 2017 to more than 200. About 600 new companies incorporated in 2019 and 2020. As of May 2021, the total number topped 2,000.

The domestic perfume market is also the darling of venture funds. From 2020 to 2021, companies from this space completed at least 10 rounds of financing, mostly over CNY 10 million each.

Last May, Scentooze (Chinese: 三兔) closed its Series A round of funding, led by Golong (Chinese: 高浪控股). The brand also received over CNY 10 million in its Pre-A financing round from Source Code Capital in 2020.

To Summer (Chinese: 观夏) announced a Series A financing round, led by IDG Capital and ZhenFund in 2019.

The thriving market enticed suppliers to take root in China, which offered emerging companies a chance to fit into the mature supply chains. From 2019 to 2020, Firmenich and Givaudan, both from Switzerland and among the the world's four largest fragrance manufacturers, entered the Chinese market. 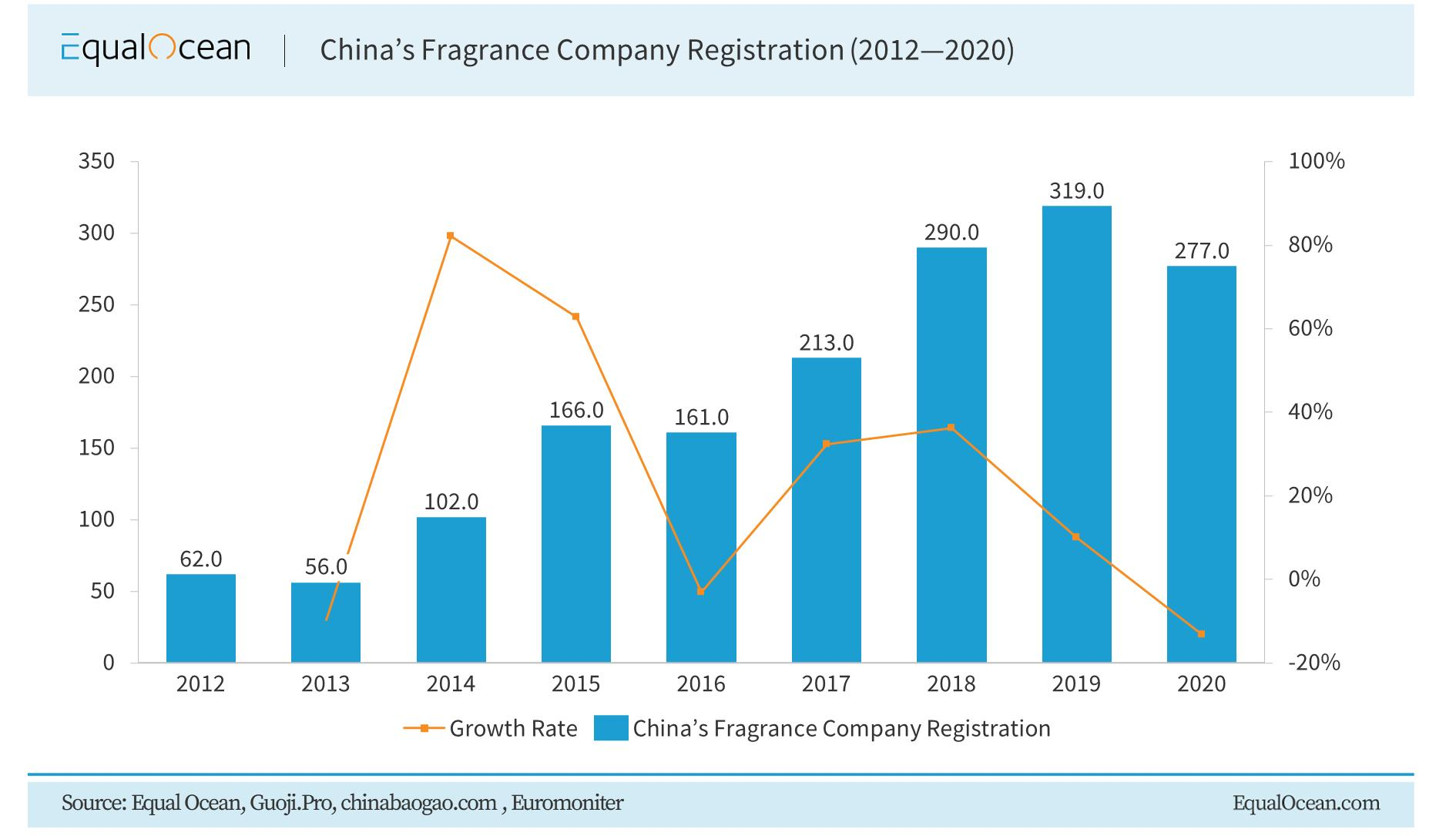 "The domestic fragrance market is indeed dominated by foreign brands, but we believe domestic products are a major trend," Rachel, the founder of Scentooze, told EqualOcean. "Domestic brands only need time to develop at this stage."

Almost all fragrance brands have their own home scents, and the epidemic also spurred the growth of home fragrances. Statistics from NPD, a consumer insights and market research firm, showed that from January to September 2020, global sales of home scents increased 13% despite that fragrance sales decreased 17% year on year. According to Tmall Global data, home scents sales increased 100% in the e-commerce shopping festival between June 1 to 18, 2021, over the same period of the previous year.

Scentooze founder Rachel believed that the demand for fragrances with healing and relaxing effects is growing in the post-epidemic era. She added that the Chinese market is shifting from supply-and-demand consumption to emotional consumption, as consumers increasingly focus on "pleasing oneself."

Niu Mingyu, a fragrance industry insider with 357,000 fans on Weibo, China's Twitter, said that "the home fragrance market is even larger than the perfume market, and it is far from fully developed in China."

This particular fragrance sector is defined by a keyword: Chinese-style niche products.

The pioneer of niche home fragrances was Diptyque, a high-end producer which, established in 1961 and entering China in 2014, boasted a per customer transaction of CNY 500 to CNY 600. Previously, the sector in China was dominated by brands such as Zara Home and Muji.

"The candle is inspired by the flourishing Tang Dynasty," Rachel explained. "We try to deliver a paean to the Tang Dynasty and the rapid rise of China today."

This retro-style niche fragrance also pointed to the growing number of Gen Zers, who accounted for about 19% of China's total population, according to data from the National Bureau of Statistics in 2018. The 2019 data from Tencent showed that the cohort contributed 40% of the overall consumption.

Gen Zers tend to favor elements such as individuality and  quintessentially Chinese influences in their purchases. An analysis from iiMedia, a business intelligence firm, concluded that Gen Zers' buying behavior is driven by three things: the need for socializing, good looks, and emotional satisfaction.

Thus, domestic fragrance brands leverage social media to satisfy the Gen Z population's needs to socialize, especially KOL and KOC, whose interactive comments are more persuasive than advertisements. Good-looking products, which are a natural attraction for the targeted group, could also encourage consumers to post production information online, further expanding customer base through word of mouth.

But good looks aren't the defining feature of Gen Zers' cravings; brands need to have good storytelling skills to trigger positive emotions from the lifestyle-savvy generation that ultimately lead to sales. And this is how domestic fragrance brands have come to differentiate themselves from foreign counterparts.

As home fragrances gained a significant foothold in the country, domestic brands collaborated with fragrance manufacturers, producing products with similar qualities. "In this era, it's hard to get 'unpleasant' smells," Niu Mingyu said. Therefore, what contributes to brands' success is factors including product types, offline stores, and marketing. Generally speaking, brands such as To Summer led the high-end home scent market, while companies like Scent Library reigned supreme in the lower-tier mass market.

With a per customer transaction of CNY 100 to CNY 200, Scent Library is an old player established in 2009. Another well-established brand is Beast (Chinese: 野兽派), established in 2011. Originally a flower shop, the brand expanded its offerings to a full range of olfactory products. Unlike Scent Library, Beast targeted a wealthier clientele, with slightly lower prices than Diptyque.

To Summer and Handhandhand top the list in terms of product types, offering items such as candle, diffuser, home spray, car fragrance, and sachet. Most existing products are reed diffusers, candles, and recently crystal stone diffusers were added to the list, popularized by To Summer. "Aromatique home spray is rare for domestic brands, let alone one that makes an impression," Niu Mingyu said, citing Frederic Malle and Aesop, two perfume specialists, as examples.

The time-honored Scent Library and Beast come at the top in offline stores. Scent Library had about 80 stores as of 2021, and Beast operated dozens. Other new brands also find their way to offline retail channels. To Summer owns several offline experience outlets. Handhandhand has various stockists. Scentooze has supplied over 300 offline beauty shops.

Offline experiences are vital for fragrance products, but they can be costly. Winshang data showed that 37% of fragrance brands opened stores, while 53% chose to partner with beauty shops that sell various brands. About 10% opted for flexible and low-cost pop-up stores. The co-founder of Handhandhand told Winshang in 2021 that "offline sales will cost about 20% to 30% of profits. Many e-commerce brands are unwilling to bear that expense."

Product types and offline stores, though vital, don't seem be the decisive factors for success; when qualities converge, marketing is. Scent Library plays on Chinese nostalgia for childhood memories. To Summer, which integrates Chinese plants and highlights Chinese aesthetics, tells stories about Chinese culture and art. Scentooze emphasized Chinese antiquity and the spirits of young girls. Beast doesn't confine itself to Chinese styles and often chooses super idols to be brand ambassadors, leveraging the fan economy.

In light of sales, To Summer and Beast seem to lead the race. According to data from its online Taobao store, Beast's best-selling home fragrance product, whose scents are mostly of flowers and priced at CNY 129, had sales of 10,000 within a month. The second bestsellers, with its exotic name "Paris Weekend," had a monthly sale of over 2,000.

A D2C brand, To Summer only sells products on its WeChat mini-program and the social media platform Xiaohongshu. Home fragrance products, including reed diffusers, crystal stone diffusers, and candles, sold out within minutes every Thursday after the company replenished stock.

There isn't public information about its sales, and the company declined to disclose statistics to EqualOcean, but  Growth Planet, a self-media outlet, estimated that To Summer's gross merchandise volume in 2021 exceeded CNY 100 million. According to a 2019 analysis by Jiemian, a business information portal, To Summer had over 30% of repeat purchases.

Scent Library also saw brisk sales occasionally. When the company launched the "cool boiled water" series, over 1 million related products were sold throughout 2018, according to TMTpost, a media outlet.

After the successful launch, the company unveiled more series, but their sales lagged far behind. Data from its Taobao store after the consecutive launches showed that monthly sales of "white rabbit candy" (Chinese: 大白兔) and "white granulated sugar" (Chinese: 白砂糖) was over 1,000 and 27, respectively, compared with upwards of 7,000 for "cool boiled water." Thus, the company only included "cool boiled water" in its reed diffusers, along with another 16 home scents.

Fragrance is never a necessity, and when qualities are similar, carefully-designed and clever marketing is the key to distinguishing oneself from the rest. Indeed, breakthroughs in quality can have long-lasting effects on a brand, but in comparison to mature foreign brands, many products smell alike, meaning that good storytellers  are poised to emerge a winner from the crowd.

Domestic brands have tapped into Chinese styles, increasing post-Covid needs for healing and relaxation, nostalgia, and other factors. An accurate brand positioning, aligned with product quality, packaging, and promotion, is definitely the solution to rise above the budding competition.