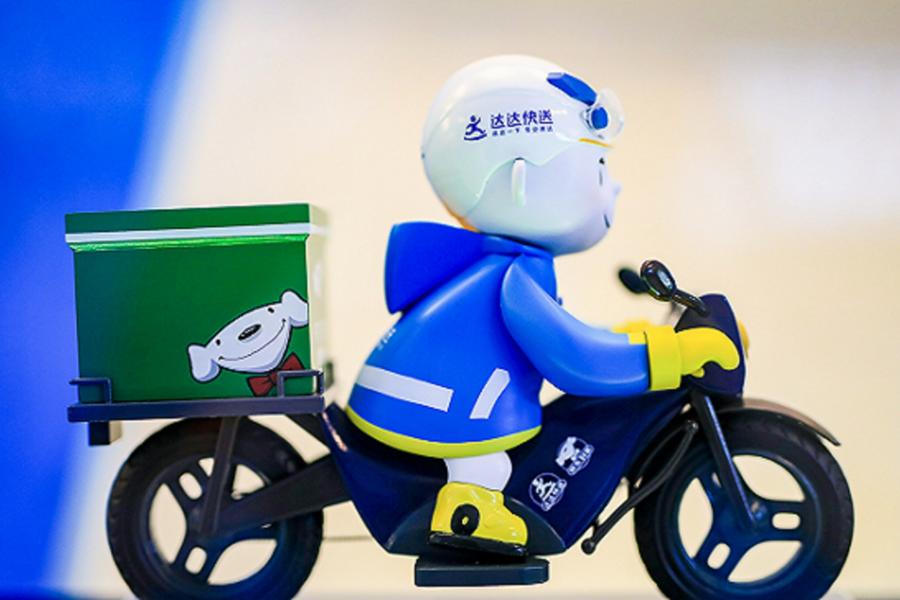 Amid pandemic-related macro uncertainties and geopolitical tensions in the past several quarters, opinions diverge among the investors who have been focusing on investing in Chinese internet companies listed overseas. Despite this, attractive investment opportunities still exist for longer-term investors, especially companies with outstanding fundamentals as well as favorable industry and policy trends. Based on our market research, Dada Nexus Limited (DADA: Nasdaq) is a stock to watch, with its improving direct margin, income growth that outruns the industry, increasingly forged ties with e-commerce powerhouse JD.com, and more.

Dada has been on our watch list for two years. Founded in 2014, the company is a well-known platform for local on-demand retail and delivery in China. It operates a leading local on-demand retail platform, JD-Daojia (JDDJ, Chinese: 京东到家), and a popular local on-demand delivery platform, Dada Now (Chinese: 达达快送). Relying on its readily accessible solutions and strong on-demand delivery infrastructure, Dada Now helps the JDDJ platform with delivery fulfillment. Meanwhile, the JDDJ platform helps improve order volume and density for Dada Now. In October 2021, JD.com and Dada jointly launched Shop Now (Chinese: 京东小时购), orders are fulfilled on the mode of 'order online with one click, delivery from store within one hour'. 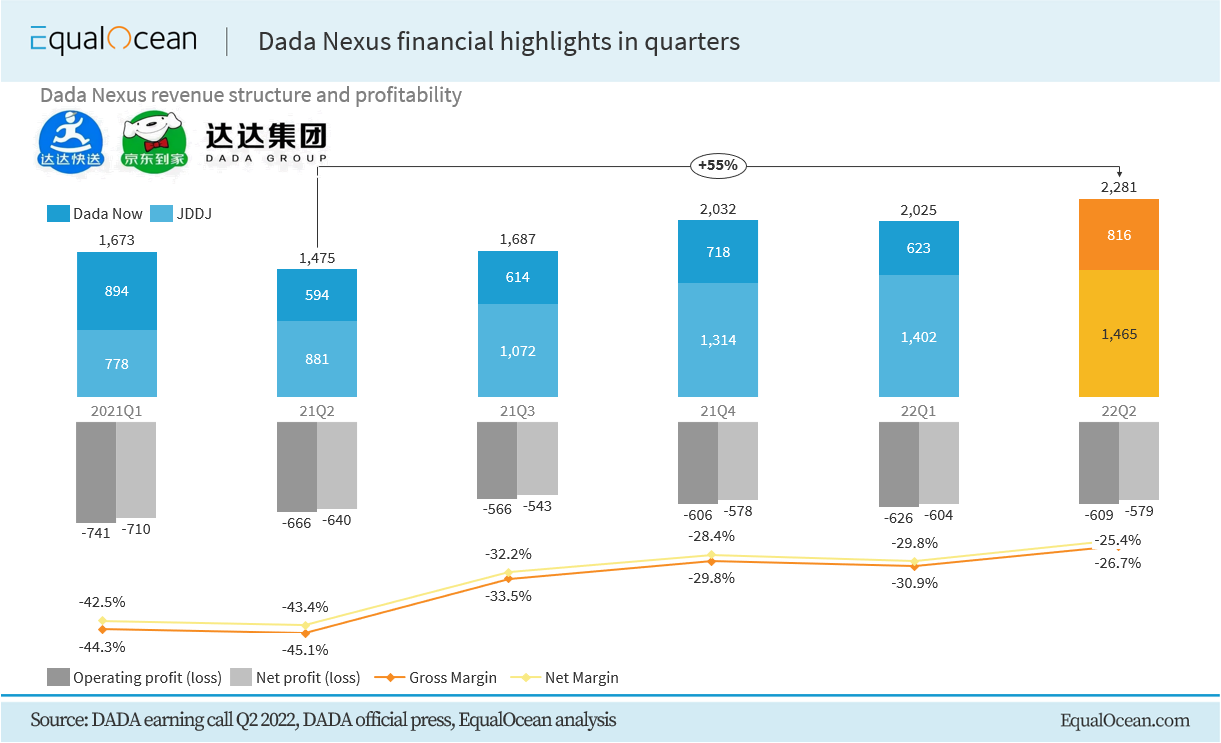 Notably, its net loss further narrows for a fifth consecutive quarter, and its adjusted net margin improved by 20 percentage points year over year with significant improvement to both core businesses’ profitability. In detail, JDDJ's direct margin turned positive, primarily thanks to optimization in consumer incentives. At the same time, the company realized a positive average gross profit per order for intra-city delivery business for KAs of its delivery arm Dada Now.

We also found that average order value (AOV) is one of the decisive factors driving growth, which also had a positive impact on profits. In 2021, according to Zheshang Securities, the average value of JDDJ orders reached CNY 192.2, as shown in the chart, significantly higher than other on-demand retail platforms: the AOVs of Miss Fresh (MF: Nasdaq), Meituan Shangou (Meituan, 3690: HK), and Dingdong Maicai (DDL: NYSE) were CNY 97.3, CNY 65, and CNY 58.7, respectively.

We expect the net loss margin to continue to narrow significantly in the following quarters and can be expected to turn profitable at the company level under an optimistic scenario.

Besides the earnings, the company also announced changes to the executive team and board. The Board has confirmed the resignation of Mr. Philip Kuai as chairman of the Board and chief executive officer, effective August 31, 2022, and has named Mr. Huijian He as president to be responsible for daily operation management and report to the Board, effective immediately following Mr. Kuai’s retirement, and has appointed Mr. He as a director of the company. Furthermore, Mr. Lijun Xin was appointed as a director of the company and to succeed Mr. Philip Kuai as chairman of the Board. Mr. Huijian He, also known as Jeff He, is a core founding leader of JDDJ, since 2014, and has served as the company's vice president since April 2018. Mr. Lijun Xin is the chief executive officer of JD Retail, he joined JD.com (NASDAQ: JD and HKEX: 9618) in 2012 and has held several key positions within JD.com. In addition, the Board has appointed Ms. Laura Marie Butler and Ms. Jian Han as independent directors of the company. We believe the joining of new independent directors will bring more diversification benefits to the team.

On-demand Retail Market is Ramping Up

The growth of Dada is also due to the prosperity of on-demand industries. According to LOGResearch's 2022 On-Demand Retail and Delivery White Paper, in 2021, the order volume in China was 30.85 billion, and the number of users exceeded 600 million, with a CAGR of 60% and 26%, respectively. It is expected that the volume will exceed 40 billion, while the number of users will exceed 752 million in 2022. Meanwhile, from 2016 to 2020, the contribution of online channels to the sales of convenience stores steadily increased. 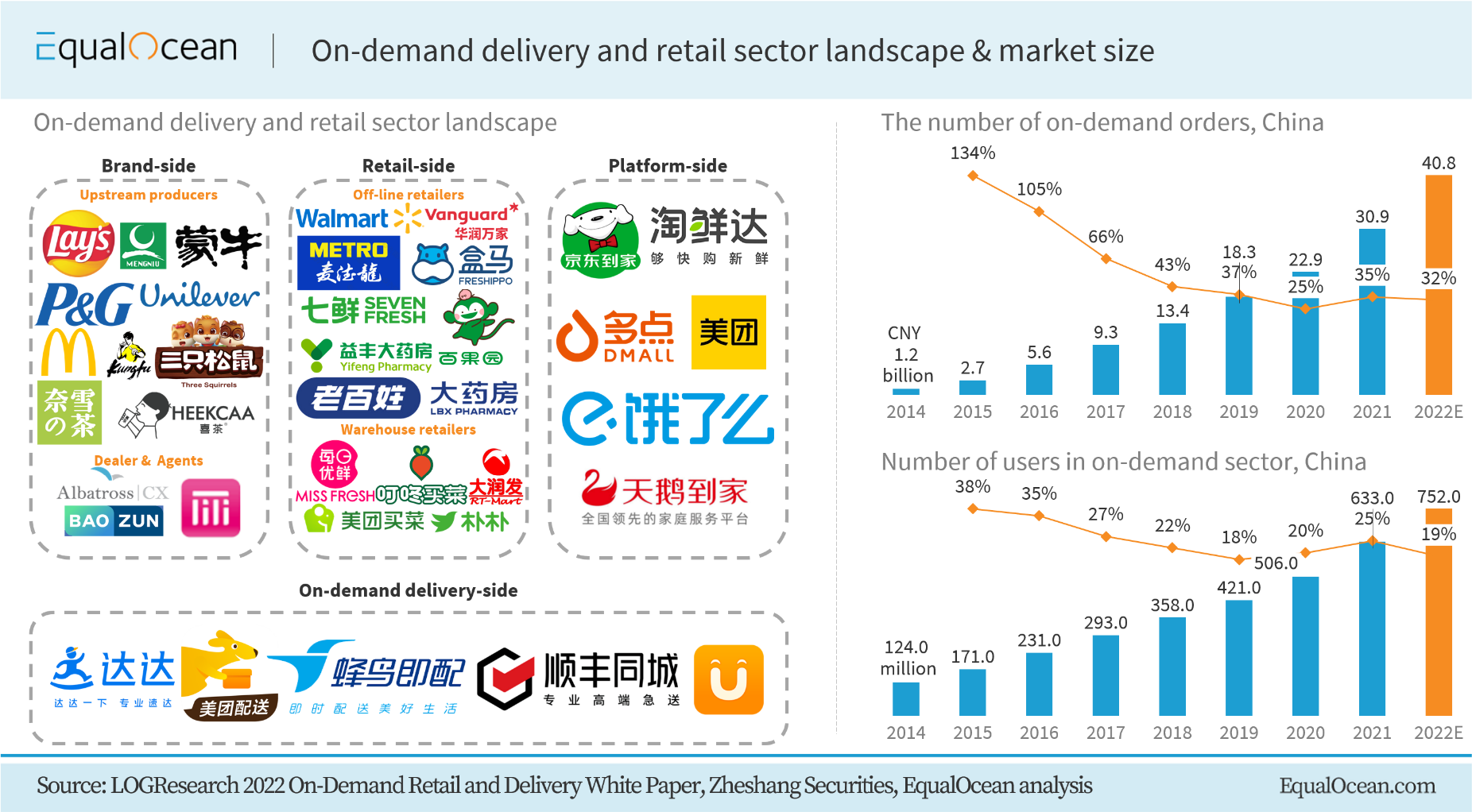 We analyzed and discovered that outstanding technology is a key for Dada to gain competitive differentiators over its on-demand retail peers. Starting from 2021, JDDJ committed itself to an retail digitization strategy, with its business expanding to consumer electronics, beauty, pet, fashion and other categories.

On the delivery and fulfillment front, the company has launched solutions such as Dada Picking, which is a digitized crowdsourcing picking service, an autonomous delivery open platform, and a smart delivery SaaS product to serve upstream and downstream partners. The company’s ability to provide integrated fulfillment services consists of warehousing management, picking, and delivery presents its unique advantages in serving supermarket KAs.

Taking the Haibo system as an example, Dada continued rolling out new features to address what merchants needed most and helped them wherever they saw challenges. In Q2, the system launched a new module enabling merchants to directly connect to JD.com’s warehouse system when they sourced supplies from JD.com. This helps retailers’ procurement staff save significant labor hours. As a result, merchants who adopted this module saw their procurement efficiency improve threefold.

Dada garnered a long-term relationship with JD.com at an early stage, devoting themselves collectively to the pursuit of strategic development and "win-win" cooperation. In February 2022, JD.com invested USD 546 million in Dada and upped its stakes to 52%. 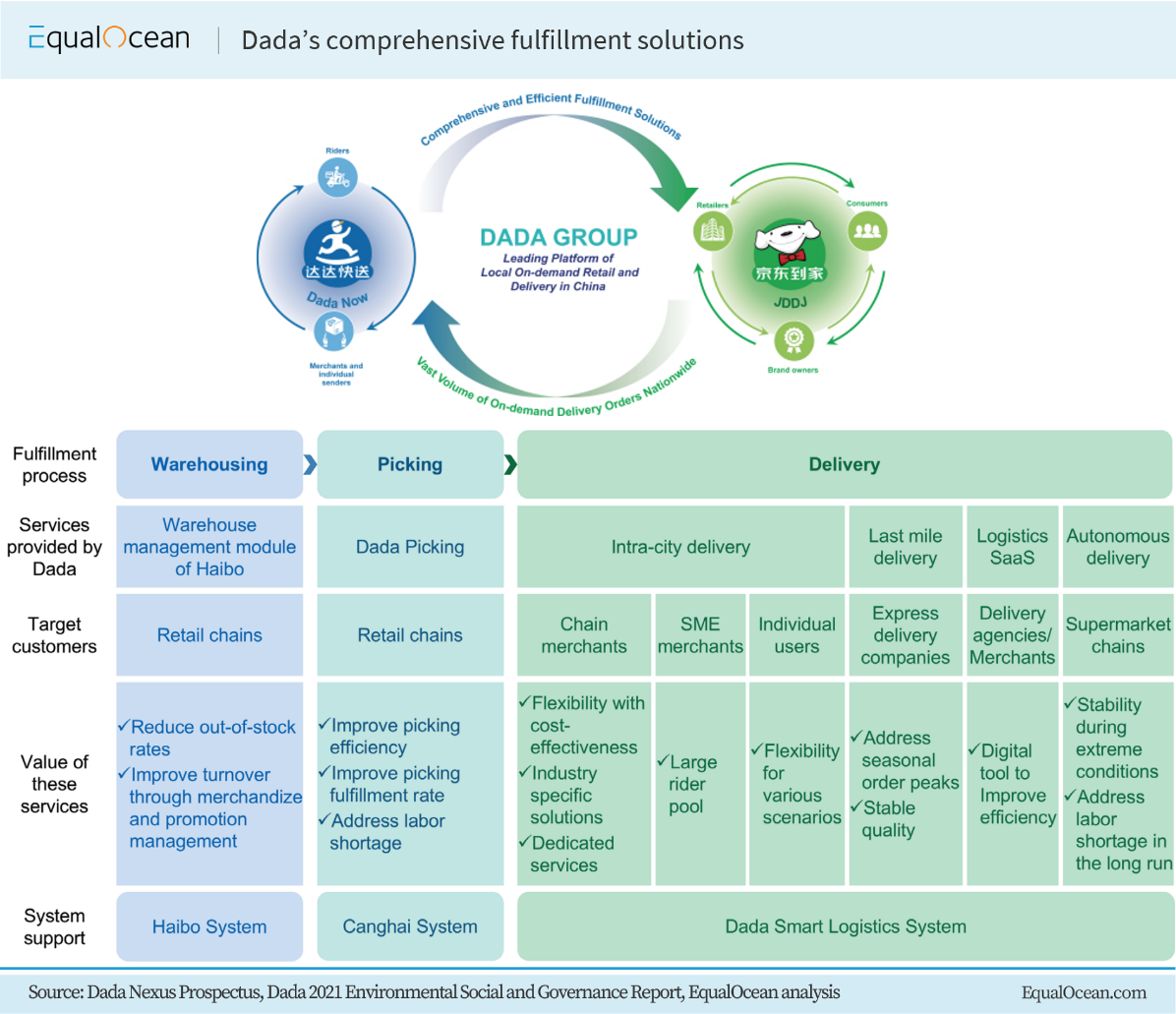 Further considering the change within the management team, we believe Jeff He and Lijun Xin's designation will further enhance the partnership between Dada and JD.com. Based on Jeff's experience in JDDJ, Lijun's proven track record within the JD ecosystem, and his leadership role at JD Retail, this will foster more synergy between the companies.

Another growth point lies in the potential of new users, which is far from the ceiling, unlike other giants. According to a report from China Merchants Securities, Dada's and JD.com's user profiles differ significantly. Taking gender as an instance, male users account for 64% of JD.com's shoppers but only 33% of JD Shop Now’s consumers. In addition, Shop Now, unlike its on-demand retail peers, attracted more people with high consumption capacity. Based on the statistics, we believe that Shop Now and JDDJ still have many potential customers with wider product category coverage.

As we mentioned, Dada is among those Chinese Internet companies that boast a precise positioning. We are still bullish on Dada in the long term because of its growth potential, relatively low policy risk, strong ties with the market leaders, as well as its proven track record with technology utilization.

CONTACT US
Scan QR code to contact us for professional consulting services
Next article
Service Robots in China: A Promising Industry with Unlimited Growth Potential