Chinese swelling ageing population is a challenge for sure, but also a golden opportunity. 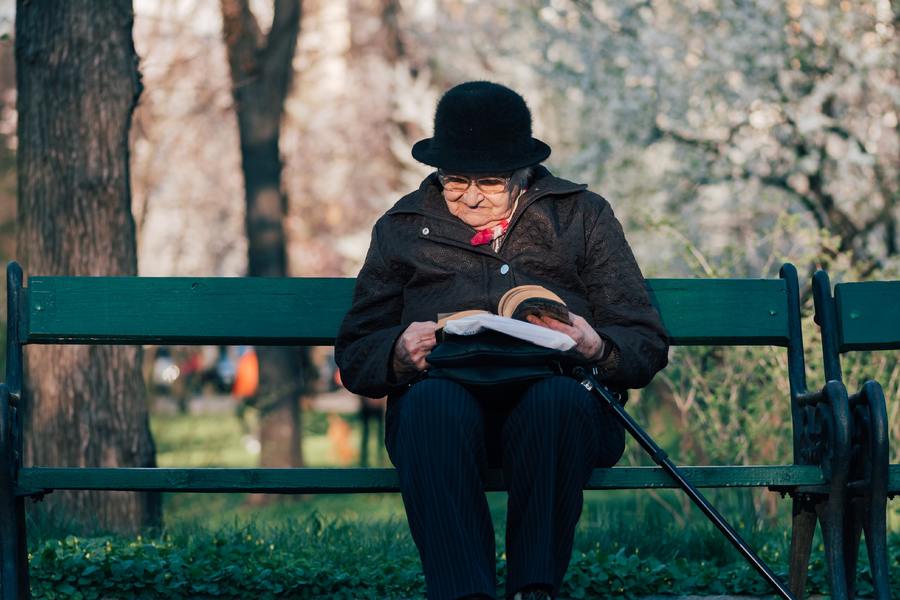 China, as is well known, is the world's most populous country. It only took China 70 years to achieve a threefold population growth, from 552 million to 1.41 billion, according to the Seventh National Population Census. However, behind this continuing upward momentum, there are also several hidden problems. On August 2. 2022, China's National Health Commission (NHC) officially announced for the first time we have high possibility of experiencing a negative population growth before 2025 – five years ahead the previous projections. And it is not a good sign.

"Ageing will be a national condition of China for a long time," Ning Jizhe, the head of China's National Bureau of Statistics, said previously at the news conference on the Seventh National Census. Over the past decade, those of China's population aged 60 and older has reached 264 million and the percentage of the old-age population stood at 18.7%, well above the world's average of 9.1%.

Since China entered the 'ageing society' bracket in 2000, the share of old-age people has been growing at an unprecedented pace. It is estimated that, by 2022, the proportion of elderly people aged 65 and over will exceed 15% of the total population, marking the national transition into an aged society. However, China was still an 'adult society' in 1982 (5% of the population aged over 60). Relying on the Chinese 'one child' policy, the population of children had been reducing by 3.62 million each year, while the population of people aged over 65 increased by 2.77 million at the same time. The country only took 18 years to complete the transition to an elderly society. In comparison, the same process took 114 years in France, 80 years in the UK, 60 years in the United States and 42 years in Germany.

Although similar declines in fertility have been observed worldwide, China's demographic problems are largely self-inflicted. The former 'one-child' policy shifted people's attitudes about family sizes and continued generating negative impacts on the fertility rate. In 2016, the 'two-child' policy was implemented, aiming to welcome the next baby boom. However, things went in a different direction than expected. The policy was accompanied by a slump in fertility: the number of births rose to 17.86 million that year — the peak since 2000 — but it has fallen sharply since then. Soaring housing costs, limited education resources, lack of affordable healthcare and gruelling work hours have all curbed young Chinese parents' desire to have more than one child.

China is in an era of rapid demographic changes, facing a total crisis of population size and a structural crisis, which might adversely stunt China's future socioeconomic development. Against the backdrop of long-term low fertility, the proportion and size of the working-age population had peaked in 2013 and shrunk gradually, leaving the demographic dividend disappearing. The pension gap is also expected to widen over time in the next decade, which could even top CNY 8 trillion to CNY 10 trillion according to IAC. This population structure's change, especially the increasingly prominent ageing population, will bring unprecedented challenges. 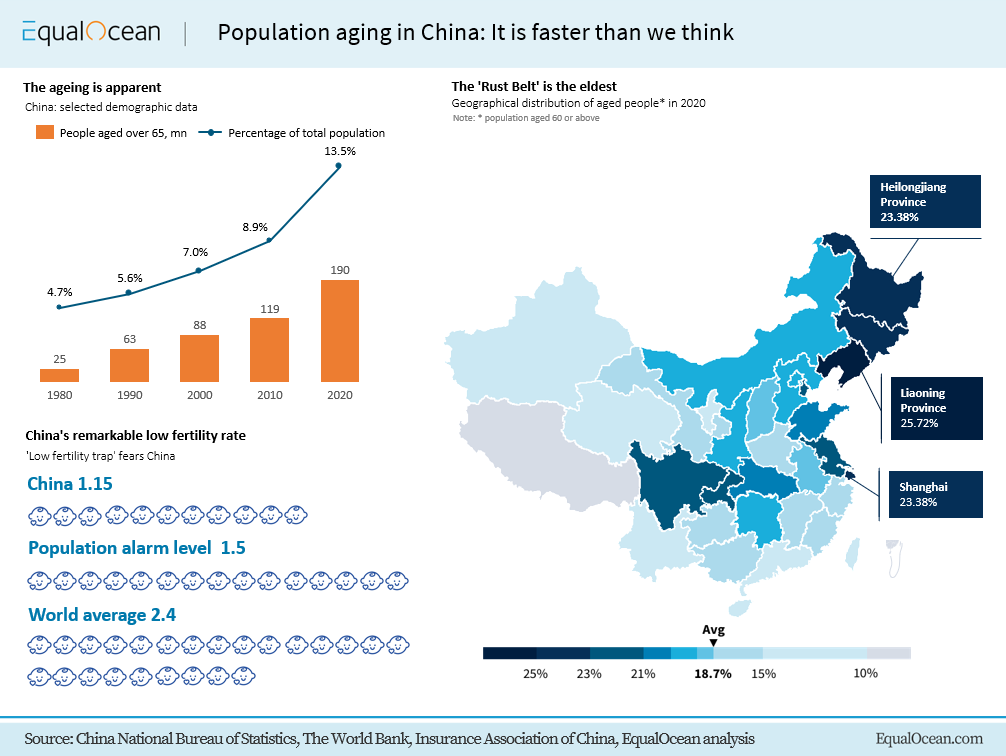 Undoubtedly, China is quickly ageing. According to the official data, except for the Tibet Autonomous Region, the share of other 30 provinces' people aged over 65 all exceeds 7%, among which 12 provinces have even more than 14% of the deeply aged population. The increased life expectancy might be a vital contributor, and still has the potential to extend.

However, every coin has two sides. The burgeoning aged population also brings some business opportunities into the table.

The silver economy is coming of age

There have been three rounds of baby booms in China. The first happened right after the foundation of China due to supportive policies. The second baby boom began in 1962, peaking in 1965 and continuing into 1977, which contributed the largest births in the country's history and also brought the most profound economic impact on the future. The newborns in that period totalled nearly 260 million, accounting for 20% of the country's current population. It is sometimes referred to as the 'compensatory fertility.' The third one – echo baby booms – happened around 1985 to 1990, since most of them were the next generation of the previous. However, due to the 'one-child' policy, the total number could not be exceeded. 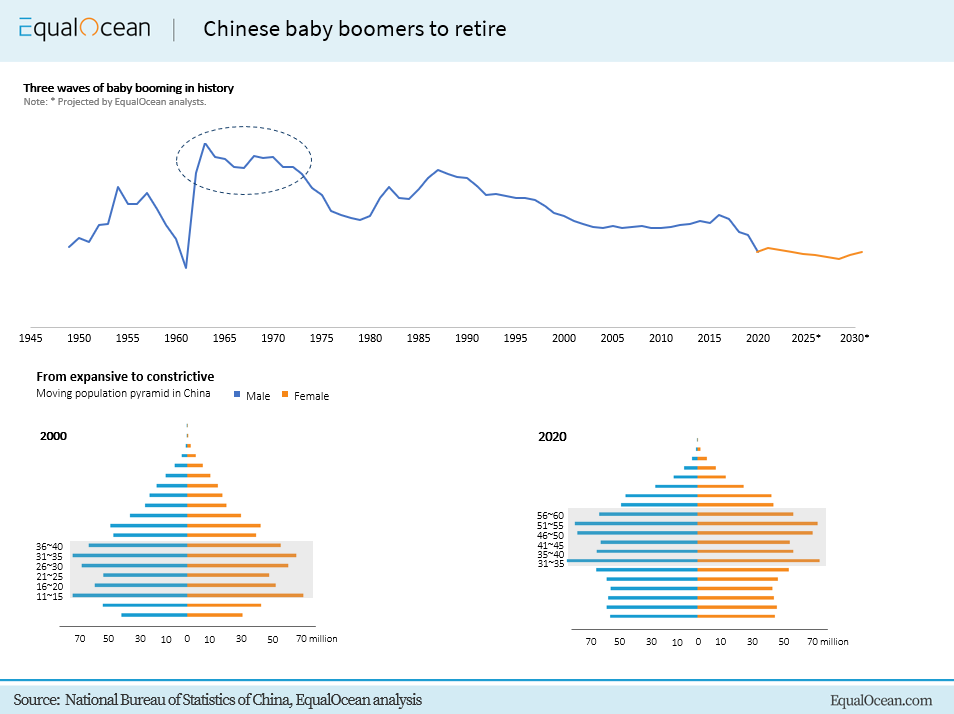 We coin the term 'new seniors' for baby boomers born in the second wave. It is not only because they are to retire in the next decade, but also considering their drastically different wants and needs. They are perceived to be the wealthiest generation, growing as the flourishing Chinese economy, and have accumulated wealth during the process, with a larger consumer power.

New seniors have witnessed the prosperity of China, for example the reform and opening, which forges their consumer patterns. Practicality, quality and functionality become top three to consider for new seniors when purchasing products or services, while price and brand remain important. In contrast, most people born before the 1950s, or the 'Silent Generation,' are described as conservative and frugal. They are parsimonious with money, putting cost-effectiveness at the core in consumption. In other words, new seniors value enjoyment more, and have more of a penchant for pursuing innovative and trendy consumption.

Over the last decade, the average growth rate of pensions for senior citizens in China has far exceeded the GDP growth rate. From 2010 to 2021, the monthly pension of retirees over the age of 60 increased nearly more than 100%, and so did the average disposable income of retirees.  As China is steering toward a more aged society, new seniors' firm consuming power, along with their higher income status, will make the silver economy the next contested market.

As China initiates a slew of supporting campaigns for narrowing the digital divide, the number of new seniors utilizing and accepting the Internet is growing in substantial speed. Among 989 million Internet users in China, the share of netizens aged 50 and above rose to 26.3% as of 30 December 2020 according to China Internet Network Information Center, and this number leapt to 28.1% up to 30 June 2021. More new seniors became Internet surfers, while the coronavirus lockdown has further accelerated the trend. Since life moved online during the pandemic, homebound elderly have been forced to digitize their lifestyles, accordingly, spending more time on social media, entertainment, life-tool apps and e-commerce platforms than ever before, which is not just for the sake of killing time, but more on satisfying the daily needs. During the outbreak, the growth rate of new seniors' consumption ranked only second to that of the Z generation.

Meanwhile, the other characteristics of China's ageing society should also be noticed. The seniors' average education level shows an upward trend as the overall economy. 36.69 million seniors over 60 years old are educated with a high school or above degree, which was more than doubled that of 2020.

China has become an aging society – this is accompanied by a surge of elderly consumers with soaring demand and spending power. In tandem with the change in consumer attitude of the aged at the same time — the post-1960s generation is more willing to spend without leaving any fortune — China's senior market is bound to expand further and faster.