Time for BAT and TMD to Hit the Driverless Car Road

As Chinese AV startups are worn out by the high costs and long-drawn-out game of L4 self-driving deployment, the Internet giants are more than happy to relieve the pressure – by offering on-board tickets. 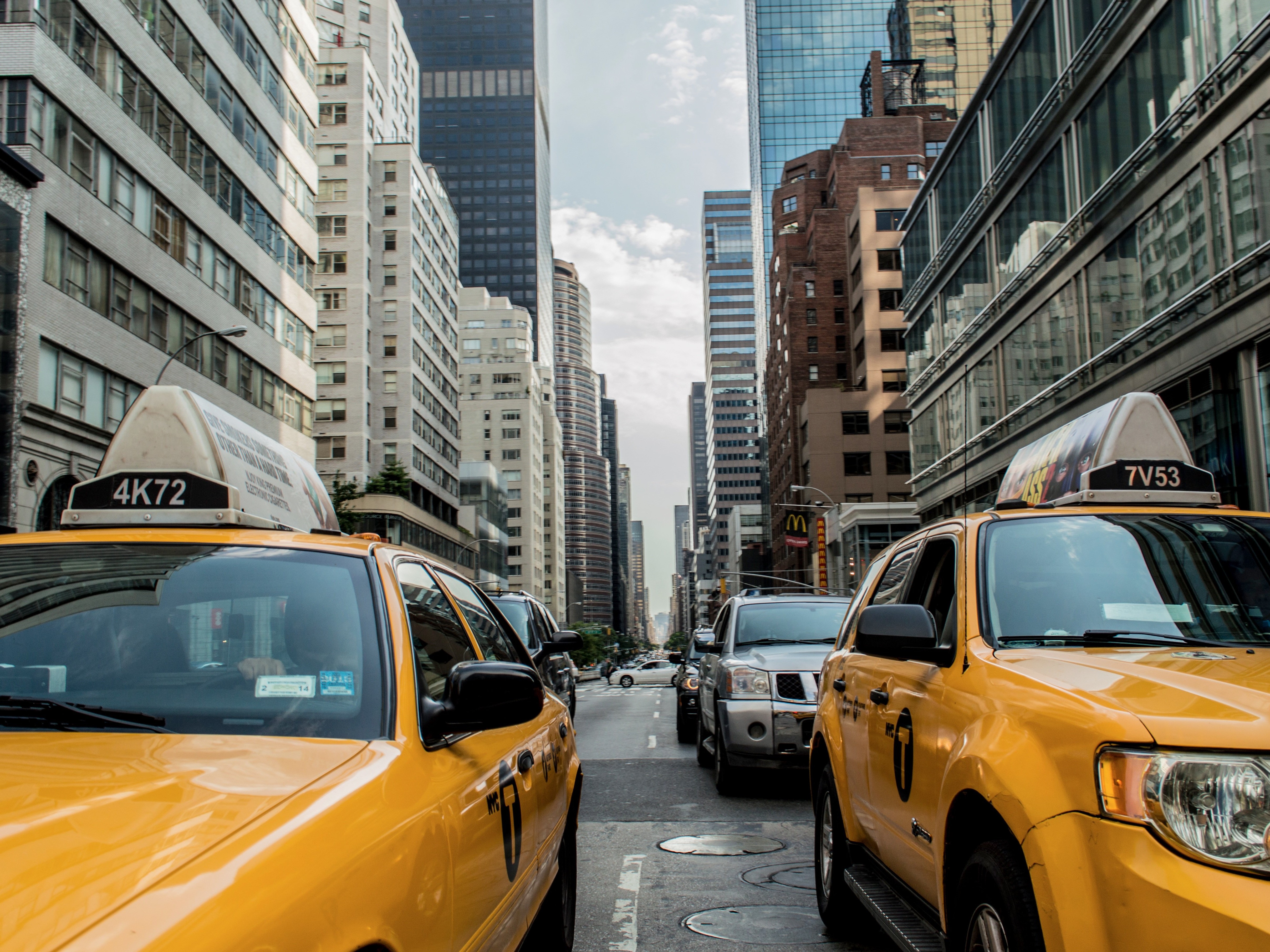 ► The large addressable market and potential revenue synergy is luring BAT (Baidu, Alibaba and Tencent) and TMD (Toutiao, Meituan Dianping and DiDi) to join the driverless car game. DiDi's in-house Autonomous Vehicle (AV)  in Shanghai is accelerating the adoption curve and also heating up the game, making the rest of the names and startups at times breathless.
► Pure-tech companies in the area have technology solutions but are struggling to step into the growth/mature stage – and with the unviable business model are exposed.
► The funding market has been cooling down for a while, with some unicorns suffering without new support. Investors are asking for more – and autonomous driving startups suffered most.
► As massive – in terms of scope, size or capacity – Level-4 AV deployments are at least four to six years ahead, a ticket to the Internet giants' boat is not a bad exit.

The descending enthusiasm of investors could have resulted from the repeatedly postponed commercialization timeline of AV technology. Both giant companies like Google's Waymo and ambitious startups as Momenta once claimed that they would materialize mass production of Level-4 autonomous driving vehicles by 2020. Yet, no single company has realized the goal, due to immature technology, stubbornly high costs and inadequate regulations.

While the investors are getting more discreet on their bets, their expectations remain high. Though the number of deals lessened in the past two years, the volume of money raised in each deal is getting higher. At the beginning of this year, Chinese AV startup Pony.ai secured USD 500 million from Toyota, yet another industrial investor following Kunlun (300418:SZ) – a gaming company. The injection will sustain the firm's research on L4 in the coming years but might harm the company's independence, in our view.

It might be hard for driverless technology alone to take a majority portion of ride-hailing trips while the rest relies on customer service, as Waymo executive John Krafcik implied. Leading companies have been operating their driverless fleet in China on a small scale. For instance, WeRide reported a total of 8,396 orders of its RoboTaxi service to Guangzhou citizens, in December 2019. However, point-to-point operations in some urban areas are still the initial stage of commercialization.

Like Waymo, Chinese VC Blue Run Capital expressed a similar opinion. OEMs, software integrators and channels surrounding the core OEMs are their priority for opportunities of artificial intelligence (AI). OEMs integrate upstream, downstream and third-party resources efficiently. In the direction of AV, those who focus on parts of the value chain can fonds the course hard, as one closes the loop of demand and supply, creating less value. The company has invested in Lixiang four times, the next being – maybe – China EV stocks after NIO (NIO:NYSE). 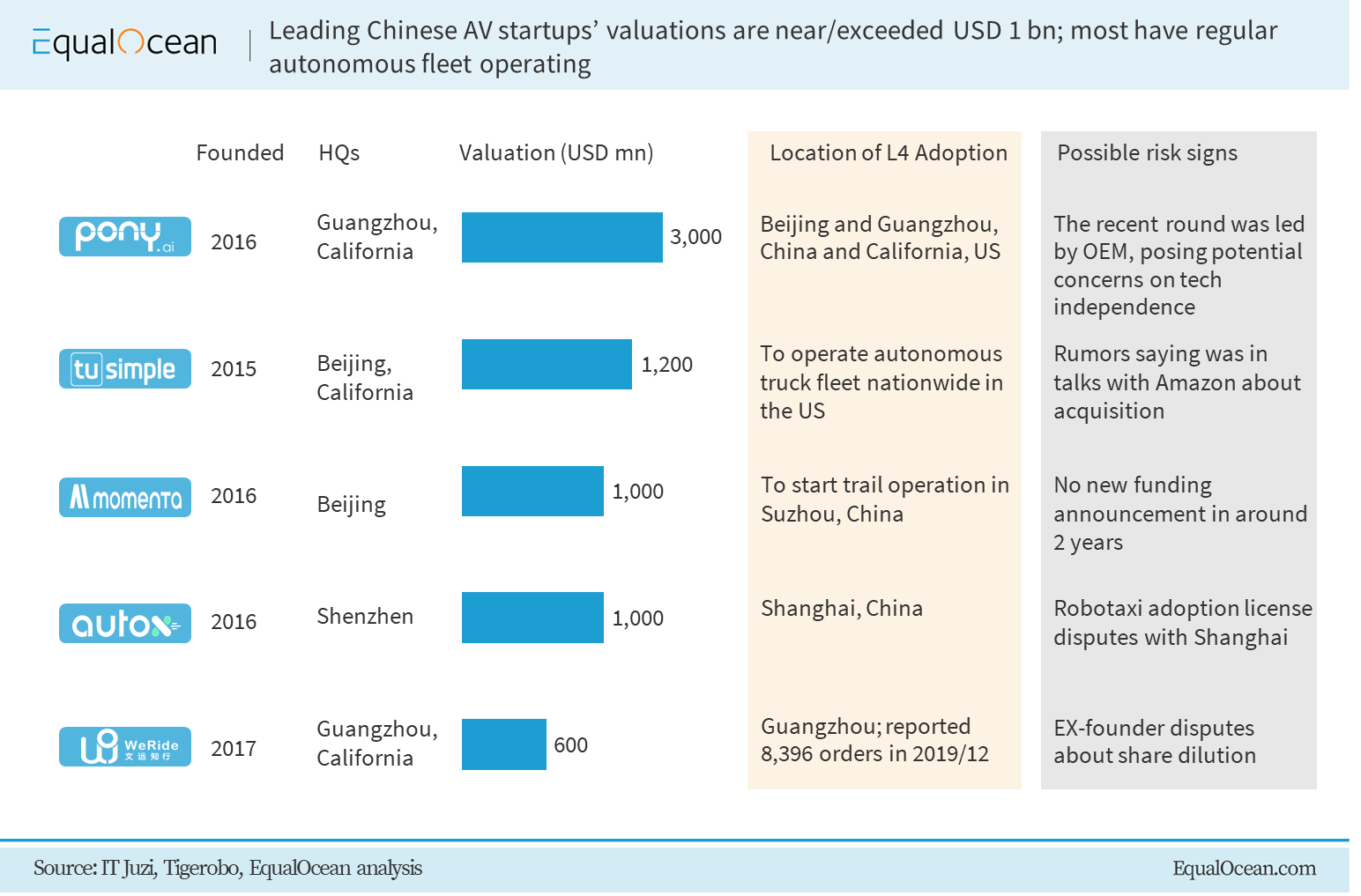 Who's the next in Internet giants' shopping bags?

Internet/industrial conglomerates have an endless appetite for cutting-edge technologies due to the fear of missing out (FOMO). Their deep pockets support the money needed for acquiring the share of a business when they feel there can be a possible revenue synergy going on.

In the auto industry, whose history is almost a history of M&As, we saw many mega-deals happen in the past five years. Chipmakers and tier-1 suppliers – sensitive to the shifts of world science and technology – are engaging in the game. Intel's USD 15.3 billion acquisition of Mobileye and Delphi's several deals is a clear sign. Pure-tech companies that have technologies but are struggling to step into the growth/mature stage and find the unviable business model are being exposed. 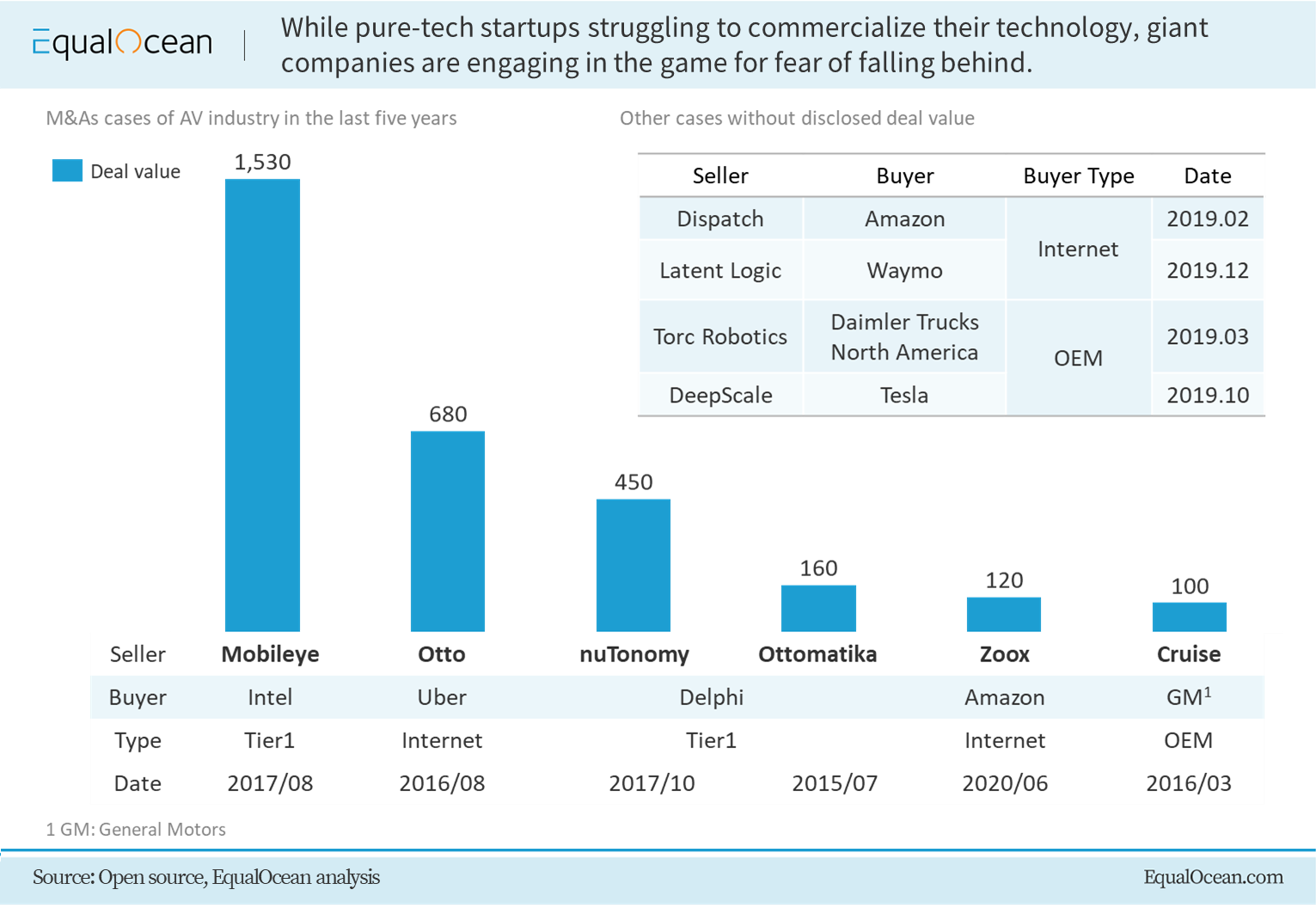 A leaf in the storm

We view DiDi's driverless service launch in Shanghai as a significant milestone for the auto industry and, at the same time, a considerable challenge to startups in the same vein. DiDi's peers – not smaller ones in the ride-hailing niche but tech giants – will react accordingly, as the cost of missing new chances may be infinite, just as Baidu missed the opportunity of mobile apps and content recommendation in the 4G era.

The large addressable market and potential revenue synergy is luring BAT (Baidu, Alibaba and Tencent) and TMD (Toutiao, Meituan Dianping and DiDi) to join the driverless car game. Meituan, for instance, has been developing and investing in last-mile delivery AVs to better support its food delivery segment. Its new bet on Lixiang shows its ambitions in networked mobility as well. 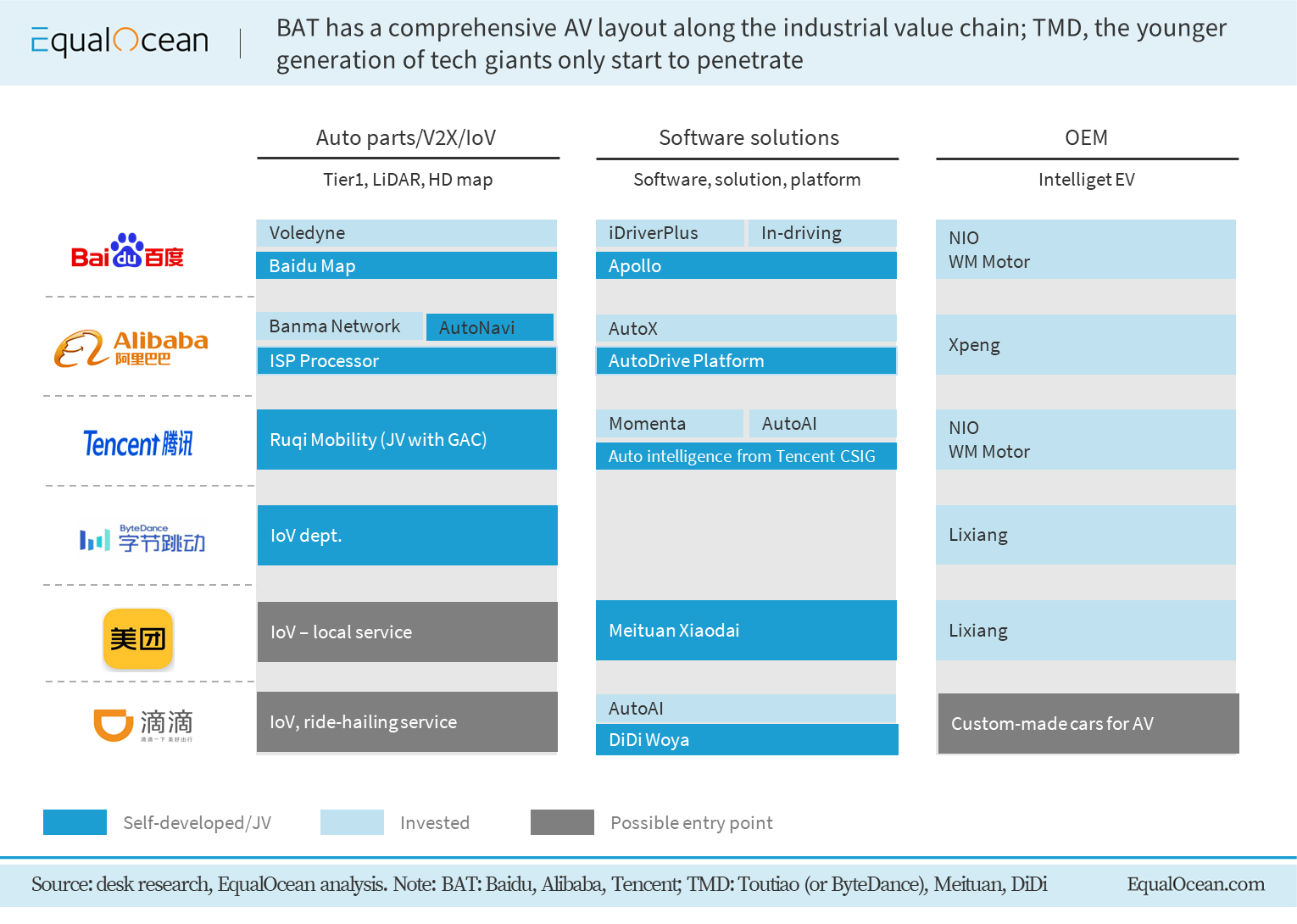 The greatest strength for Internet giants to rule the AV business is the solid user foundation created by their primary business. ByteDance (BD), for instance – the Daily Average User (DAU) of its hottest app, Douyin (China’s counterpart to TikTok), reached 400 million as of January, the number having hit 900 million during China's lockdown. The advantage that BD has on traffic entry and its intelligent recommendation systems is paving the way to the Internet of Vehicles (IoV). It will take full advantage of in-car times of drivers and passengers by providing short-video content and expects to commercialize from advertising.

Alibaba has made a presence on the upper stream, investing/building ventures of HD map (AutoNavi) and IoV/V2X (Banma Network). E-commerce giants like Alibaba and JD.com all research on autonomous long-haul freight where L4 Autonomous Truck companies like TuSimple Inceptio and Plus.ai leads the game.

As DiDi shows a clear mission to envisage itself as operating fleets of autonomous robotaxis in the next ten years, BAT and TM need to consider engaging more in the game. The need to understand who develops owns and operates the driverless robotaxis or trucks and the surrounding systems, and further, how their advance computing capabilities will help or hinder their entry into the market with their more-than-ten-billion customers, is crucial. They can provide the whole autonomous network with the required infrastructure and best customer experience and move the needle for the autonomous driving industry.