From Zero to One: Harmontronics’ Struggle and Success

Harmontronics has developed from one person to 800 employees, one self-developed machine to 78 patents during these 14 years. The firm’s success comes from its correct strategy and persistence. 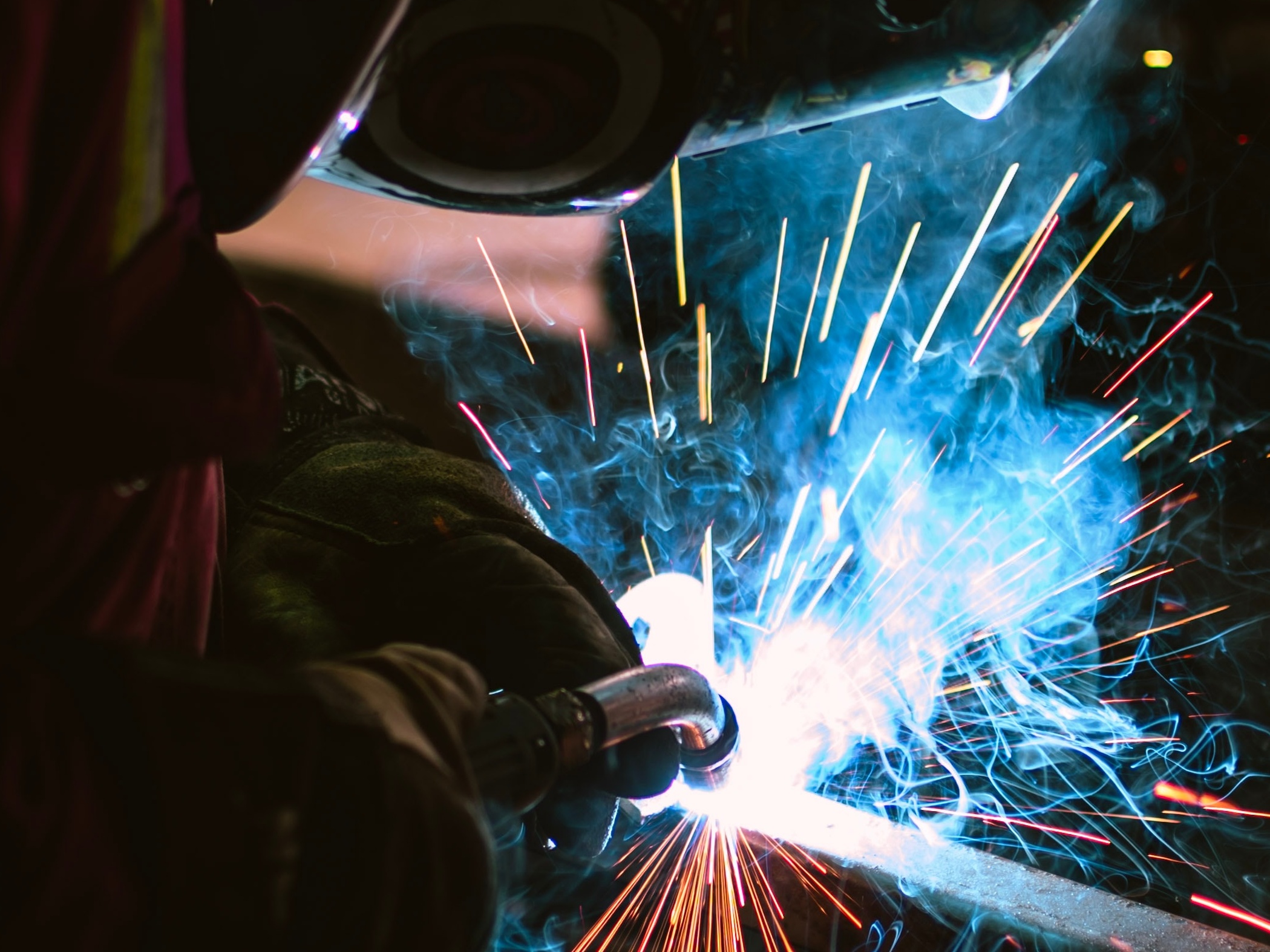 ► Thanks to TE Connectivity (泰科电子) – a connector maker, which discover Harmontronics’ professionalism and gradually helped to expand its businesses.

► With strengths in technology and client stickiness, the firm’s operating income is growing faster, but there is still a long way to go for it to overtake top firms in the industry.

In the new round of technological and industrial revolution, intelligent manufacturing has become a hot topic. From the US-China trade war in last year to the US government's ban on Chinese high-tech firms, China is trying its best to do 'Chinese Intelligence' (中国智造). The setting up of the STAR board could be seen as an example, which provides more room for Chinese high-tech companies to develop. Specifically, Harmontronics has seized the chance to go public and attract more attention globally.

As a precision small products manufacturer, Harmontronics' path of entrepreneurship was not smooth initially. With merely one person, one bag and one computer, the founder – Changwei Cai – started the business in 2006; his goal was to make it global.

In the first year, Changwei did not enjoy much of a chance, due to the fierce competition in the manufacturing industry. However, in the second Spring Festival, TE Connectivity asked Harmontronics to produce a piece of small equipment, as other firms were having a rest. This chance allowed TE Connectivity to see the firm's professionalism and started cooperating with it, which gradually expanded Harmontronics' popularity. As for the subsequent 13 years, the small product maker has kept innovating its products and equipment. As a result, it already has owned over 2,000 production lines and four bases globally.

In the early phase of development, Harmontronics focused on its R&D, and it has developed the first auto connector. From 2010 to 2013, the medium development term, it kept innovating and started exporting its equipment overseas. For instance, it exported an automated assembly machine to France. Later on, it stepped into the accelerated stage, further expanding its overseas businesses. To be precise, it has built a subsidiary in German. After 2017, its high-speed development period showed an upward trend in its operating incomes as it has extended more new businesses. It is also worth noting that electric cars' intelligent manufacturing has accounted for a considerable part during these three years, for an average of 91.33%. In 2019, it was even listed on the STAR board, with its total market value approaching CNY 5 billion. 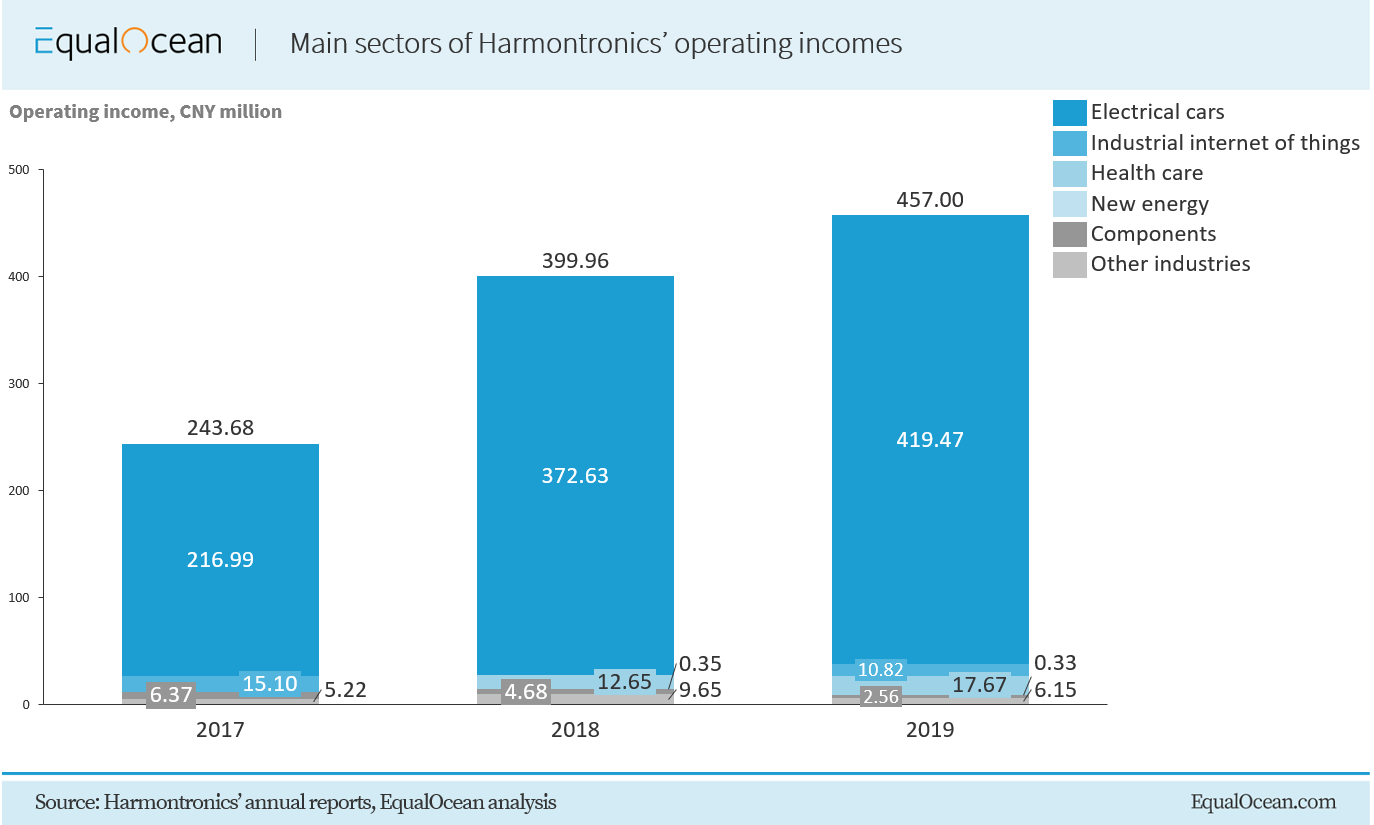 How could the small products manufacturer develop from zero to one within these years? Two main strengths cannot be ignored. Firstly, the technological advantage. As a high-tech firm concentrating on innovation, it has organized a team full of technical talents, with 402 technical staff by the end of 2019, occupying half of its employees. As a result, the firm has owned 14 core technologies regarding high-precision positioning and Computer-Aided Manufacturing (CAM), 78 patents and 29 software copyrights so far. Furthermore, the income in core-technology products has accounted for an average of 97.52% for its operating income, implying the significance of technology to the firm. 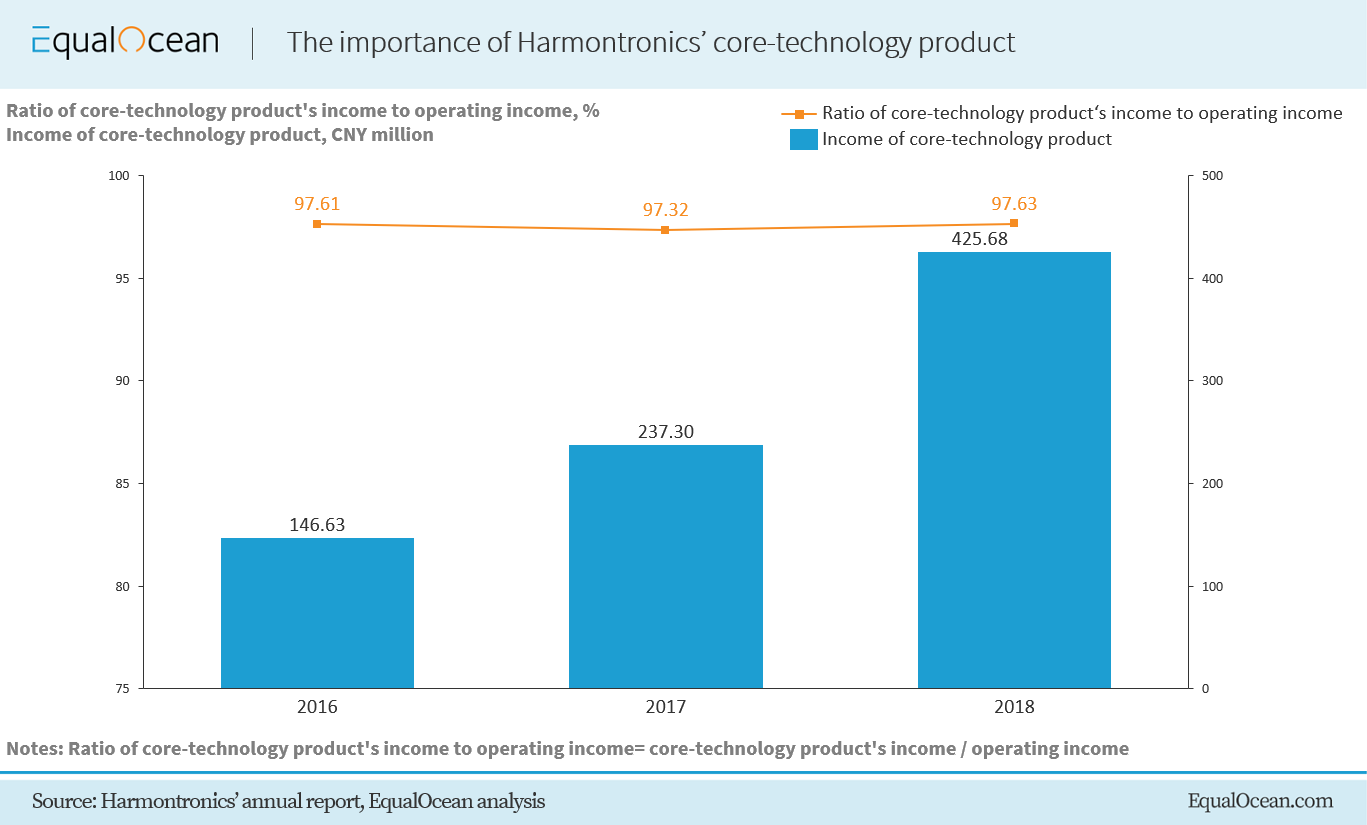 Secondly, it has strong customer stickiness. As Harmontronics keeps expanding its electrical car sectors, it has attracted investments from the top ten electronic component manufactures, such as: Robert Bosch Gmbh, MAGNA INTERNATIONAL, DENSO and Valeo Group, etc. Also, the firm has built a long-term and stable relationship with these clients, further increasing customer stickiness. These customers have gradually transferred their overseas orders to Harmontronics, so around 88.9% of its income is from overseas earnings. Moreover, 75% of income comes from the top five customers, and TE Connectivity has occupied 50% approximately in the past three years. 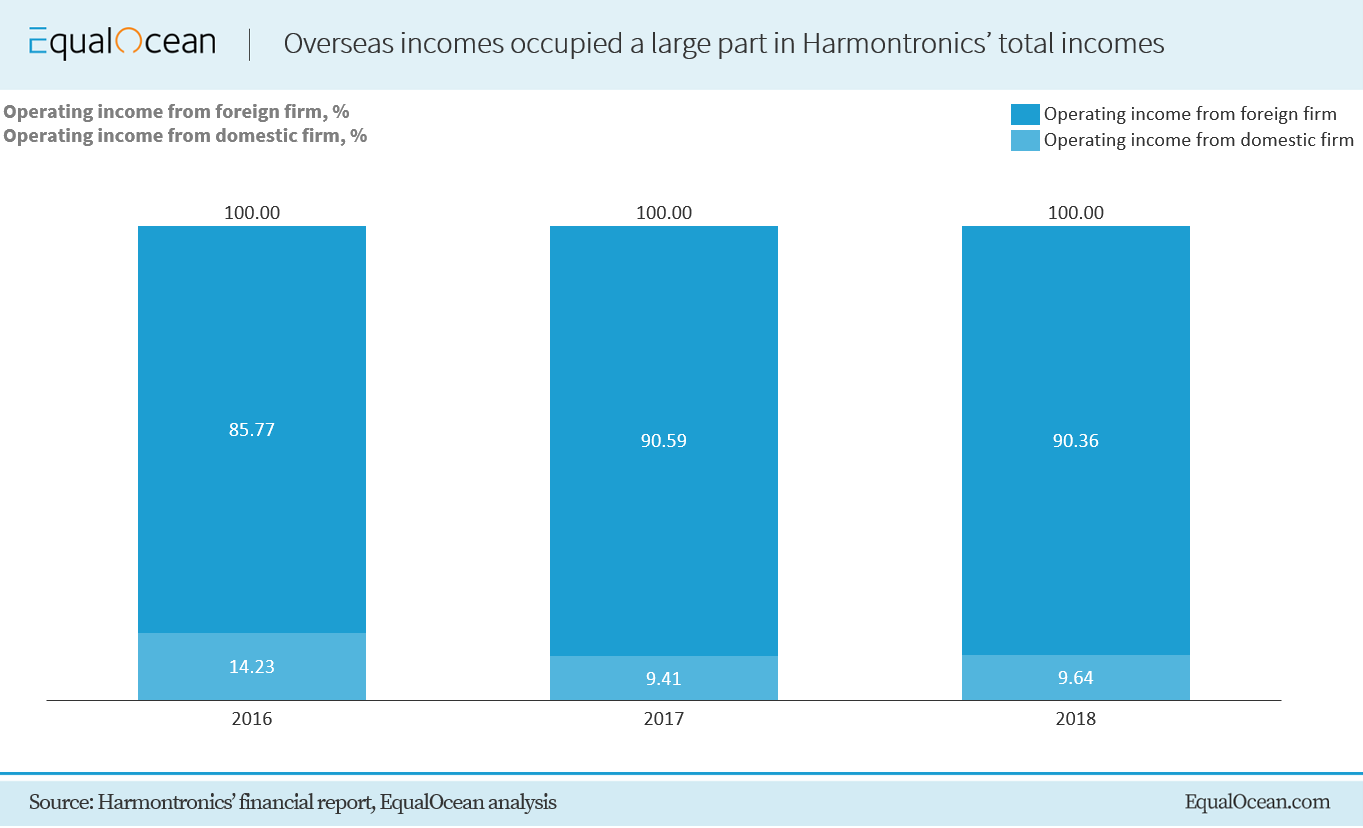 Except for its inherent advantages, some external opportunities are also valuable. Thanks to the promotion of national policies in the industrial internet of things (IIoT) and electric cars, Harmontronics’ primary sector – electric car and IIoT – has increased sharply. To be precise, there was a 60% growth in its market size, from CNY 550 billion to CNY 880 billion. Moreover, the State Department issued ‘Made in China 2025’ in May 2015, which put intelligent manufacturing into the core position, encouraging firms to develop its core technology. Also, China has been focusing on the new infrastructure projects recently, so the development of 5G would also extend IIoT’s leading businesses. According to General Electric, IIoT would affect 46% of the global economy and bring a USD 15.3 trillion increase in GDP. 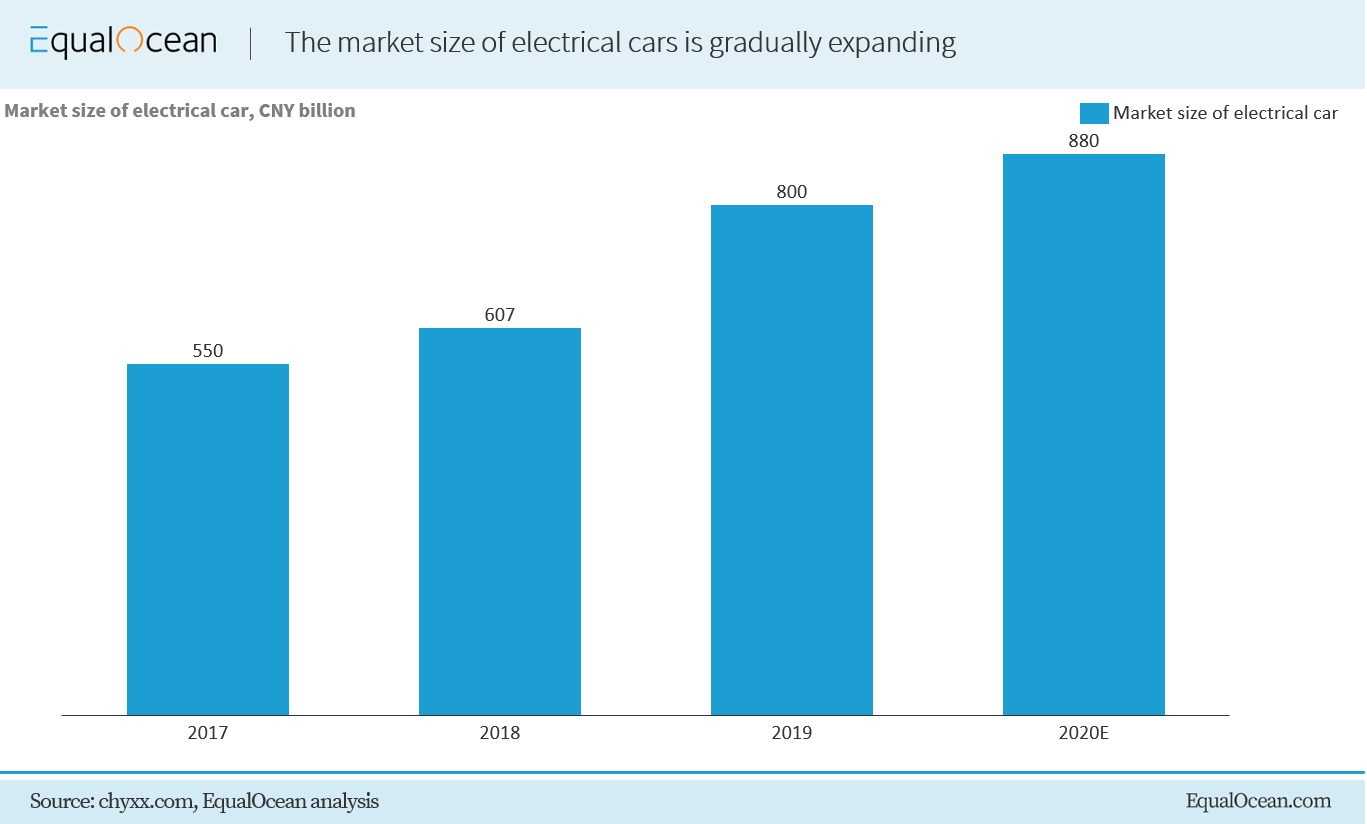 However, Harmontronics also has its weaknesses. As the electric car industry is the most significant field in the intelligent manufacturing downstream, and 91.79% of operating incomes are from the electric car sector in 2019. If there is a fluctuation in the firm’s downstream, it will exert a considerable impact on its overall incomes. Moreover, Harmontronics is facing immense buying powers. Specifically, the ratio of the top five customer incomes to operating profit was 68.85% in 2019. Once the main customers stopped purchasing products, the firm would have the risk of lower incomes.

Even if the intelligent manufacturer has expanded rapidly in these years, it still has a long way to go as it faces external threats. As a whole, the small product maker is not in the tier-one position compared with other firms in the same industry. Concerning the ratio of R&D expenditure to operating income, it is below the industry average – 8.48%, implying it still should put more weight on the R&D. Additionally, its gross profit margins and operating income are also below the industry’s average in 2019. Hence, Harmontronics is supposed to concentrate on its existing businesses, further cutting costs and increasing profits. 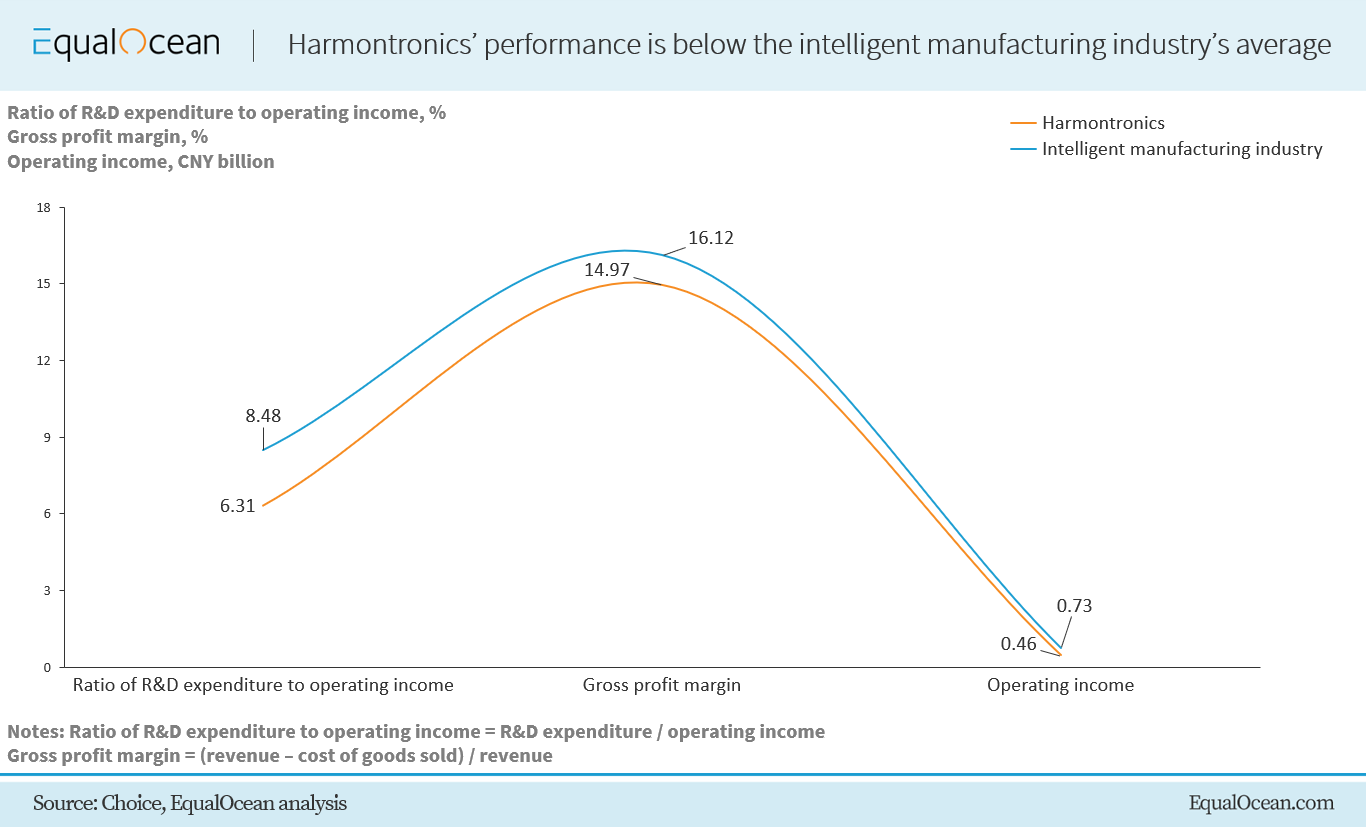 From the above, Harmontronics has caught up with opportunities from national policies these years, which further amplifies its strengths in technology and customer base. Nevertheless, the firm’s weaknesses in industrial chains and buyer power also prevent its progress. Moreover, the emergence of COVID-19 does bring new chances in intelligent manufacturing, but exerts a negative effect on its on-going projects. In the future, Harmontronics should find a new operating model to accommodate changes under COVID-19, further promoting innovation in core technologies.