Once touting itself as a 'magical website,' 58.com is no longer 'magic' – category leaders have defeated the horizontal platform in a succession of duels over market share in emerging digital industries. 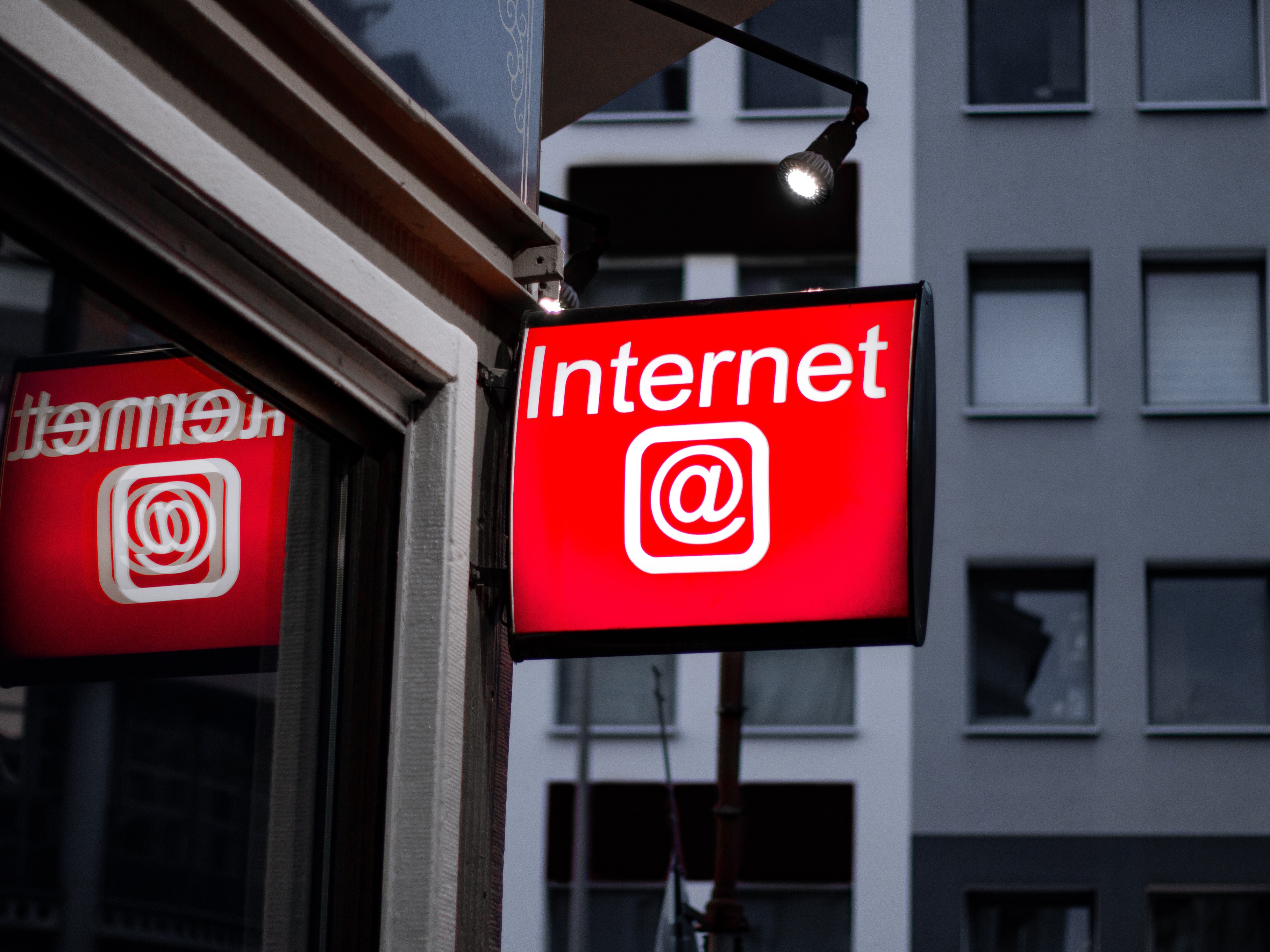 ►Revenue and net profit growth rate are slowing down as the market share of each business segment is grabbed by newcomers like Boss Zhipin in the recruitment track, Xianyu in the second-hand trading market and Lalamove in the freight sector.

►With core problems unsolved, 58.com is planning to enter the e-sports industry, where China's largest RE developer Wanda Group failed. The future remains dim, in our view.

Founded in 2005, 58.com (WUBA:NYSE) is the largest website in China providing local life information classification services, including real estate and rental business, recruitment, car trading, second-hand product trading and freight services. Since going public in 2013, 58.com gobbled up its competitor Ganji.com, winning 85% market share and growing up to be a king of information services through solving information asymmetry for users.

However, unlike Meituan-Dianping (03690:HK), which intensively cultivated the mainline of catering and gradually expanded to local life services such as tourism and hotel business, 58.com blindly expanded its territory into recruitment, freight and other fields under the condition that the mainline of business had been blurred, forming an information service platform that is full of fake information.

With the continuous expansion of 58.com, the greed for more fields has bred up-and-coming stars in subdivisions such as Beike, a house rental platform and Xianyu, a second-hand trading platform introduced by Alibaba (BABA: NASDAQ, 09988:HK). Eventually, 58.com chose to delist through privatization, stating that it had signed a merger agreement with Quantum Bloom Group Ltd. 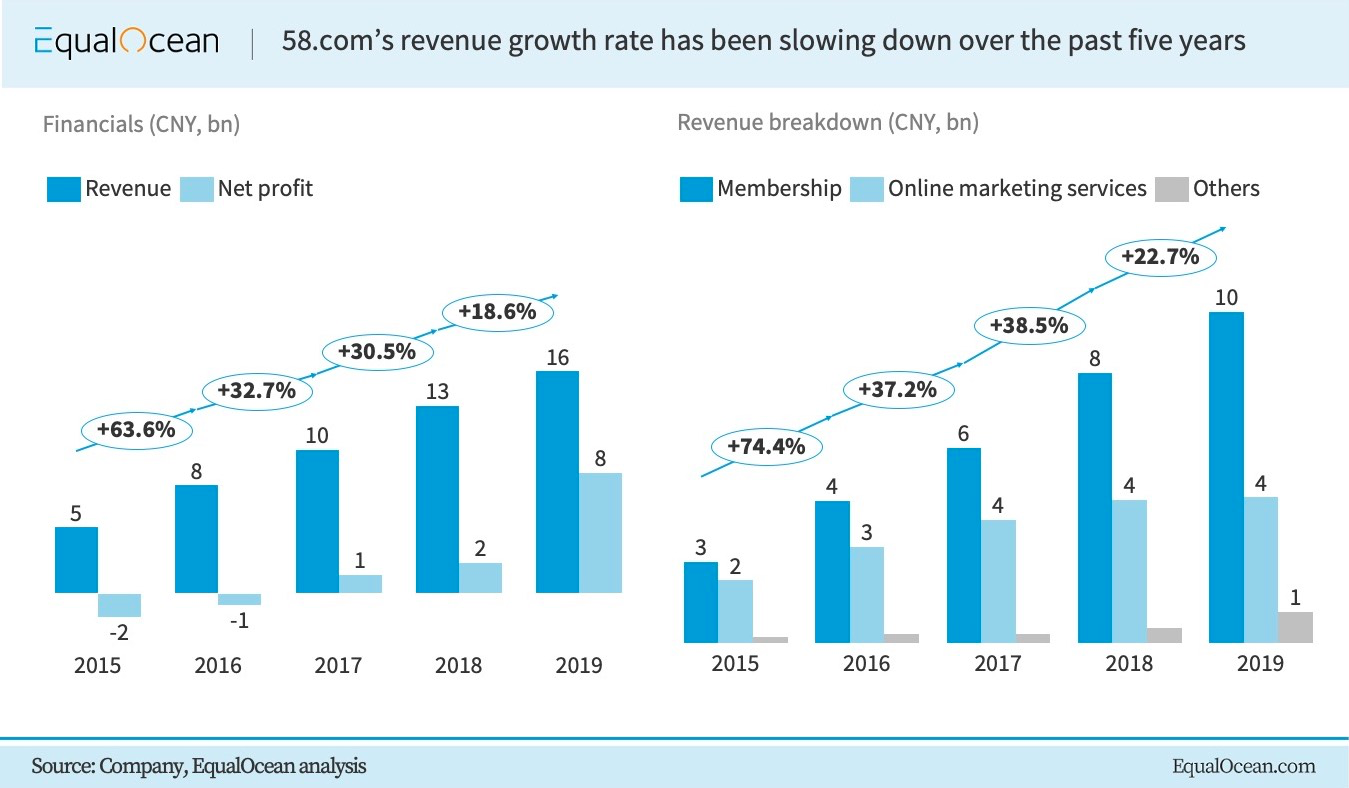 58.com generates the most revenue from online marketing services and membership for additional assistance, accounting for over 90%. However, the revenue growth rate of the two segments was slowing down, dragging down the overall growth rate after 2016 from 63.60% to 18.60% even though revenue has been growing in the past five years.

In terms of net profit, 58.com experienced losses in 2015 and 2016 and turned losses into profits in 2017. After a sharp decline in the growth rate of net profit in 2018, the company's net income soared 314% in 2019. However, among CNY 8.28 billion net profit in 2019, 74% are from investment income through selling shares of Chehaoduo, indicating that the growth rate of net income from operations didn't increase as investment income was not sustainable.

Why did 58.com continue to go downhill?

Laying out the structure of 58.com's business, it has been laid out on diversified tracks – but now all face potent enemies as the firm has been resting on past achievements instead of innovating. 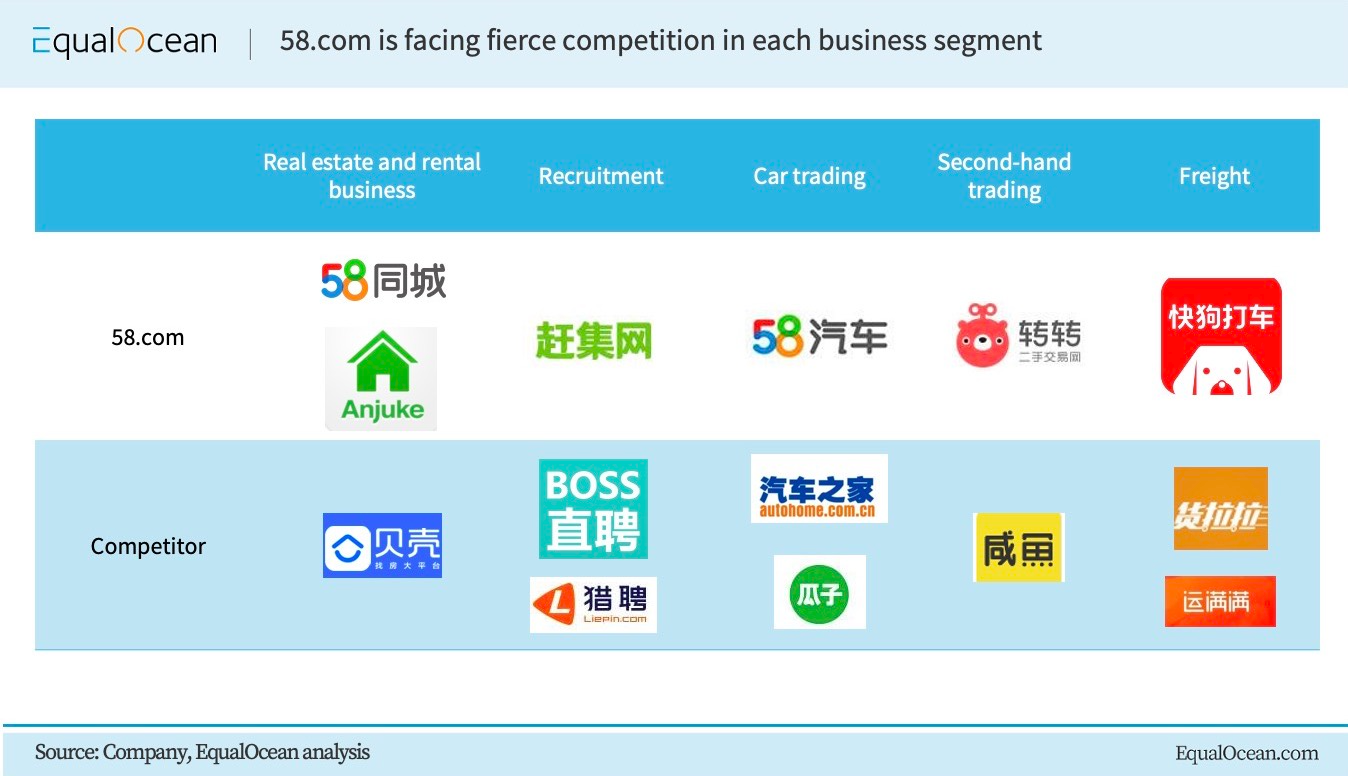 Real estate and rental business. In 2015, 58.com spent USD 260 million to acquire Anjuke, planning to achieve business integration in the fields of new housing, second-hand housing, and rental housing. 58.com leveraged Anjuke to enter the new housing market, while 58.com helped supplement rental business. However, after the acquisition, the company failed to go deep in the vertical chain. Instead, it used Anjuke as the traffic entrance to divert to other rental companies.

Traffic was once the biggest weapon of 58.com. It uses high-frequency advertisements to attract C-end traffic, and then sells it to B-end enterprises at different levels of 'package.' In terms of charging methods, the firm adopts a model similar to Baidu's search engine; in other words, traffic will flow to whoever spends more money. This bidding model cannot fundamentally meet the needs of consumers and is full of a lot of false information, which gradually loses traffic.

However, the rising star, Beike, better matches supply and demand through the 'Agent Cooperation Network.' In the offline market, there are 456,000 brokers and 42,000 brokerage stores, contributing a large amount of data, housing, services and transactions. On the other hand, Beike has built a data and technology-driven operation network, forming a real estate database of 226 million real estate information to digitalize and standardize data. Targeting the C-end has pushed Beike's valuation to USD 10 billion, leaving 58.com far behind.

Recruitment. After 58.com acquired the veteran recruitment website ChinaHR in 2015, its market share in the field of recruitment has gradually increased to 37.60% of the industry in 2019, because the company penetrated tier-3 and tier-4 cities as well and 51.40% of job seekers prefer to choose the integrated service platform according to Analysys. 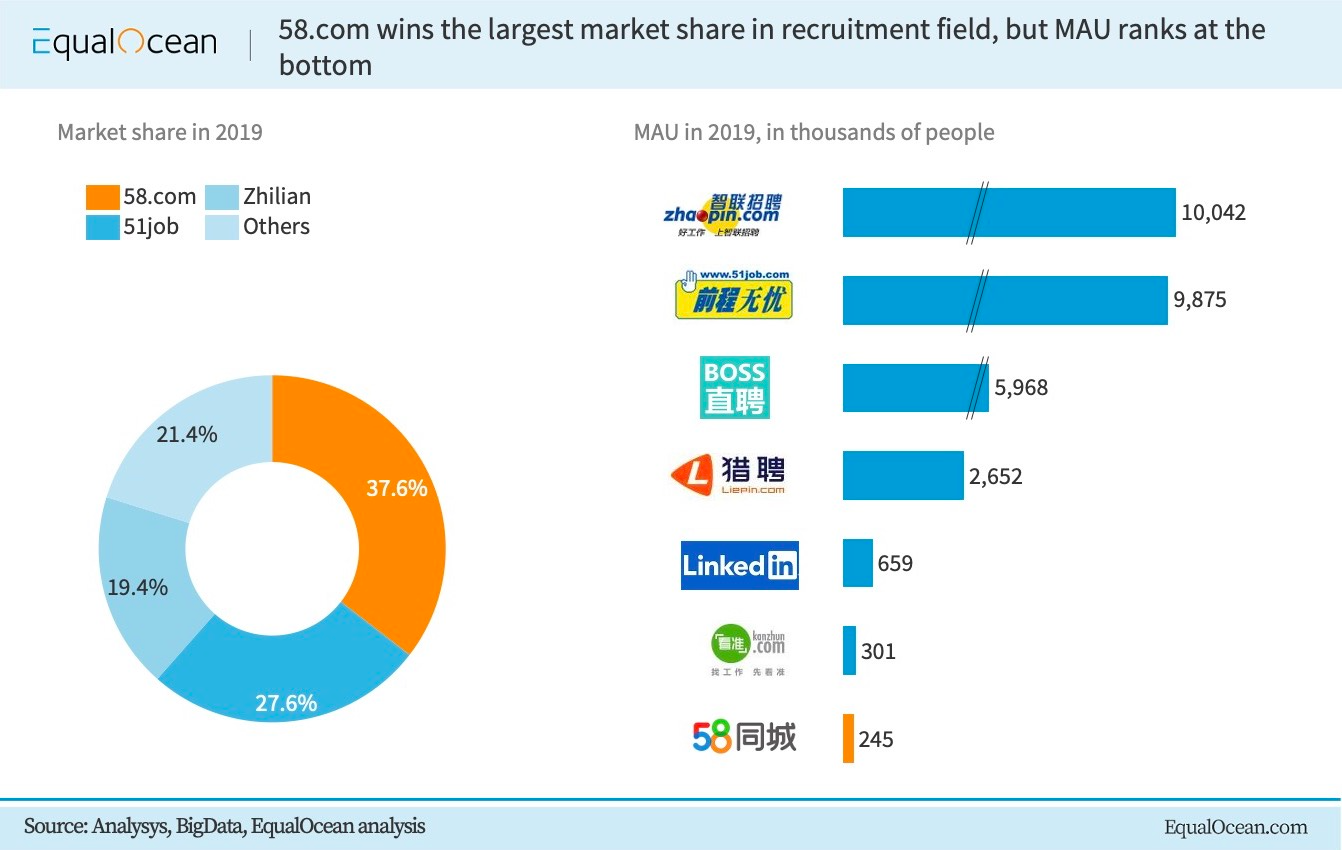 However, with more emerging recruitment platforms focusing on vertical fields such as Zhaopin.com, 51job and Boss Zhipin, 58.com's MAU rate has been surpassed. From the perspective of user stickiness, 58.com ranks outside the top ten, implying that it is likely to be replaced by platforms which target more segmented business in the future.

Car trading. Although 58.com's B2B model does not need to be promoted to users, the company is facing the problem of car sources. Most second-hand car dealers don't put the best quality car on the Internet, so attracting channels is getting more and more difficult.

The fundamental reason why American brand Carmax can make money lies in the fact that cars are in the hands of institutions, and it is also related to the diversification of second-hand car operators, the diversification of transaction methods, and the simplicity of transaction procedures; while domestic vehicles are in the hands of individuals, and coupled with the constraints of objective conditions such as scattered vehicle sources, difficult cross-regional transportation, and high funding requirements, it is difficult to expand the scale.

Affected by the epidemic, in February 2020, the second-hand car market transacted 71,100 vehicles, a month-on-month decrease of 92.78%. Coupled with the downturn in the automotive industry, 58.com's second-hand car trading business is struggling.

Xianyu, backed by Alibaba, is positioned as a sharing economy community, paying more attention to transaction volume and order volume. Moreover, second-hand platforms not only need to solve the problems of payment, logistics but also need to deal with after-sales service of buyers and sellers and accurate product recommendations. As a traditional e-commerce giant, Alibaba is the industry leader in payment, such as Alipay and logistics Cainiao, providing strong support for Xianyu.

Freight. In terms of transaction volume, Lalamove and Kuaigou Dache account for 54% and 25%, respectively. In the beginning, the driver resources of these two platforms were different. Lalamove targeted a high-end group of people, while Kuaigou Dache received orders mainly from the building materials market.

However, as market competition becomes more intense, the user groups and driver resources of the two have gradually become consistent. Kuaigou Dache adopts a scoring system. The higher the service score, the easier it is to grab a large order. However, the policy stipulates that only making small orders increases service points, which encourages drivers to grab small orders, dragging down driver's profits. Lalamove allows drivers to grab orders regardless of their level.

Besides, to transport products over the same distance, Kuaigou Dache is more expensive than Lalamove, gradually tilting the order toward the latter. As Didi Huoyun, which comes with a powerful flow entrance from Didi, invades the same track, grabbing c-end customers is more becoming strenuous for Kuaigou Dache.

The old problems have not been solved – yet 58.com is planning to enter a new field. On July 13, Yao Jinbo, 58.com's CEO, took the lead in exploring new recruitment channels for emerging industries such as e-sports. However, if 58.com still adheres to the stubbornness of traffic, the new field will most likely not bring significant benefits to the company.

In conclusion, in the early stage of the mobile Internet, 58.com's classified information platform had first-mover advantages in every field. It should become a comprehensive aircraft carrier, but the company did not sufficiently dig deep into the vertical track, gradually being overtaken by rising stars. Privatization and delisting become doomed.