What is the future of this B2B foodservice company touching upon a CNY 5 trillion industry? 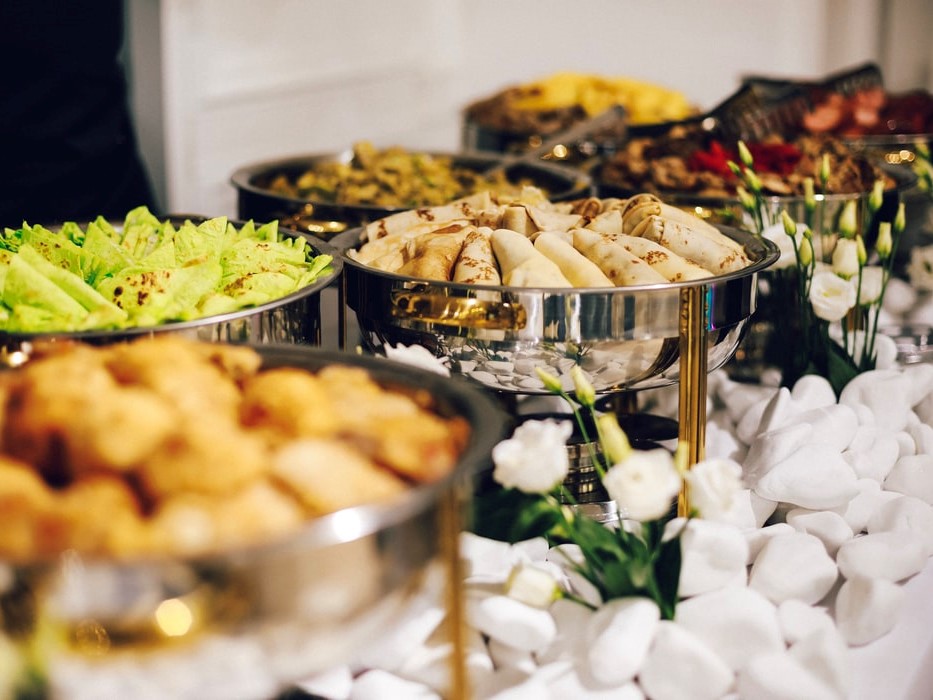 Foodservices are an essential part of the CNY 4.6 trillion catering value chain in China, providing restaurants, hospitality spaces and schools with daily food necessities. The industry is spawning a flurry of startups, including Yiguo, Songxiaocai and Meicai, all adding to a rising ecosystem in recent years, with consumer Internet conglomerates Meituan Dianping and Alibaba also joining the game. Foodservices form a highly fragmented market that has yet to see any big distributors dominate a significant market share overall. It is an industry facing unprecedented upstream integration and logistics challenges – and the complexity of dealing with China's all-important agriculture industry.

Meicai, one of the most widely followed companies in a field of smaller competitors, reached a valuation of USD 7 billion after closing a Series F round in 2018. The company faces very different market dynamics than its counterparts in the US – Sysco (SYY:NYSE), US Foods (USFD:NYSE) and Performance Food Group (PFGC:NYSE). Thus it is hard to choose a benchmark for the business.

EqualOcean has conducted an exclusive interview with Meicai's founder and CEO Liu Chuanjun to discuss 'why Meicai is not Sysco' and 'the future path of Meicai and how it is connected the fate of China's agriculture.' 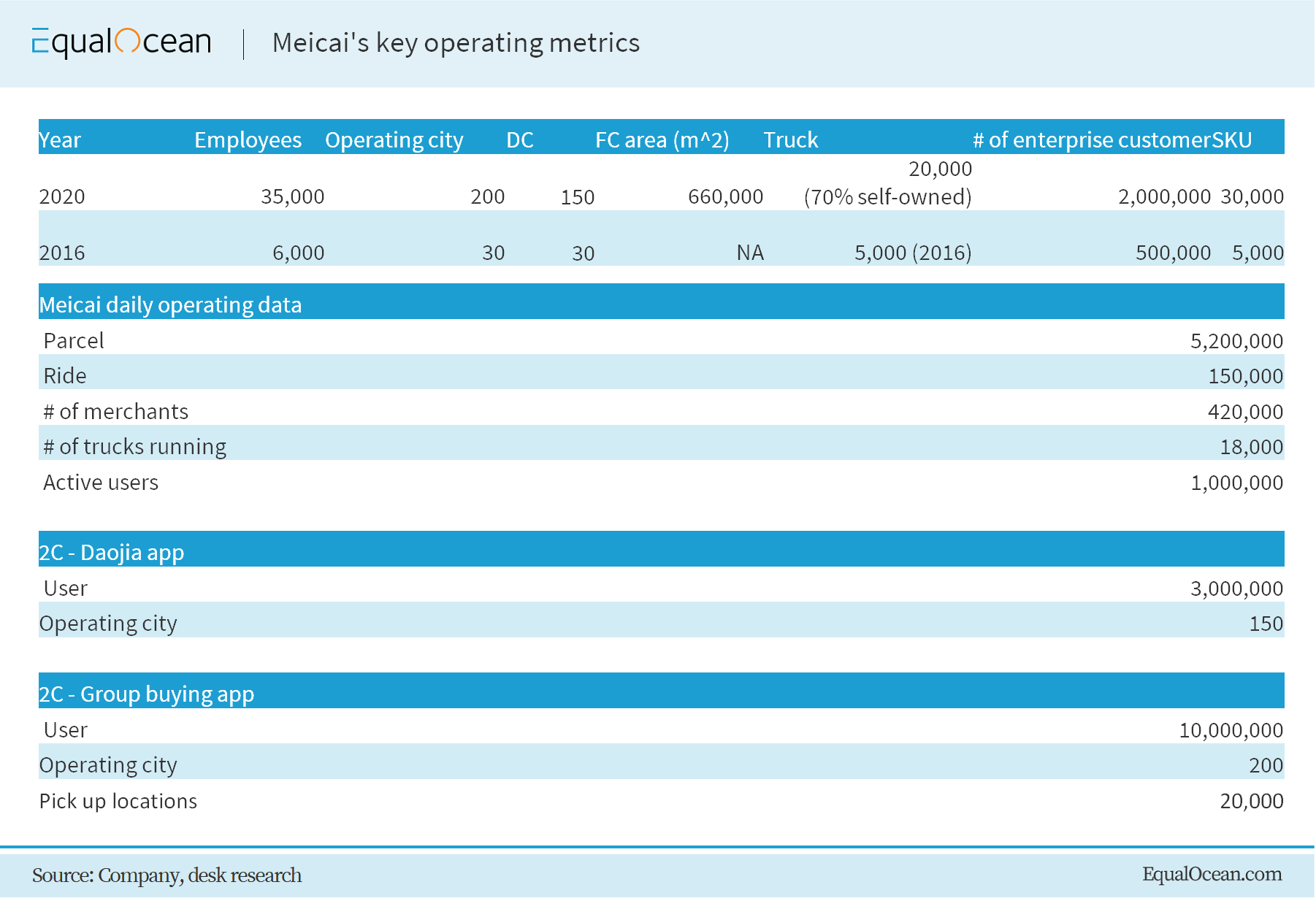 Meicai's Business-end, millions-serving SMB-side continues to drive its growth in the past four years. In 2017, China had 3.5 million restaurants. According to the founder Liu, Meicai is expected to reach CNY 14 billion sales in 4Q2019, a 40% increase over a year ago.

The company made further inroads into fresh food B2B and subsequent capabilities in order fulfillment and sourcing models. It now has 4,000 suppliers among which 45% to 50% are direct sourcing and 30,000 SKUs vs. 5,000 SKUs in 2016. It added the number of trucks operating to 20,000 today from 5,000 in 2016, with 70% are self-operated. It has 150 DCs in 52 cities, in order to serve all kinds of clients on its platform, increasing from 2016's 30. These are sensible moves as regards improving long-term fulfillment efficiency and expanding delivery networks, in our view.

In 2019, China had 551.62 million population with an agricultural hukou, accounting for 39.4% of the total population. The number of rural communities has been declining as people migrate to the cities, leaving an accelerated farm consolidation process and reduced labor availability in the countryside. The relatively small farm size in China – an average of 2.5 acres vs. 444 acres in the US – is fundamental to the overall agricultural transformation progress which Meicai is aiming to push forward.

Beijing has been launching a strong extension program to build essential infrastructure, especially roads and highways, to help farmers master modern agricultural technologies and improve yields and farmers' revenues. The countryside's service industry is expected to boom in the foreseeable future. Liu said that family farming is likely to dominate the Chinese farm structure. The agricultural sector will become much more concentrated and intensive, along with the further rise of branded agricultural products. Thus, it calls for infrastructure development, especially a well-structured channel, a value chain that benefits each shareholder, especially farmers. A whole logistics system will support the industry, and different categories will build its value chain to suit for downstream needs. There is likely to be a further trend to fewer, larger family farms and non-family types of agricultural production. This will lead to the continuous enlargement of farm size. The industrialization of agriculture solves many pain points that family farming faces nowadays – volatile pricing and uncertain producing capacity.

In today's rural areas, fruit became the first category to transform, turning towards a large-scale renewed farming method, as consumers are willing to pay premiums for exotic varieties of fruits. But the support system for Chinese agricultural producers is not as well-developed or effective as the American system. Thus, Sysco faces challenges coming from downstream merchants' needs instead of upstream suppliers. Their upstream players are traders like Tayson and Smithfield Foods and they are meeting more concentrated downstream needs – that's why Sysco's early and major users are SMBs. The Sysco driving business engine path is highly clear as a result – driving sales, adding cash flows, and acquiring a new target. Meicai, however, lacks enough accretive acquisition opportunities. Food distributors in China are too traditional to incorporate into a tech-driven Internet food service company. More importantly, most of them are building partnerships with merchants based on personal relationships, which makes accessing their resources through mergers harder. But Meicai did find one good enough local smaller player – Liancai – to make investments with. Meicai will continue looking for deals like this one, according to Liu.

This article is part I of our analysis on Meicai. Please continue to part II.

CONTACT US
Scan QR code to contact us for professional consulting services
Next article
Three Leaders and Three Generations: The Story of China Merchants Bank