HYC has been developing quickly these past years, with considerable operating income and net profits. On the contrary, its problem of fluctuating revenues needs to be settled urgently. 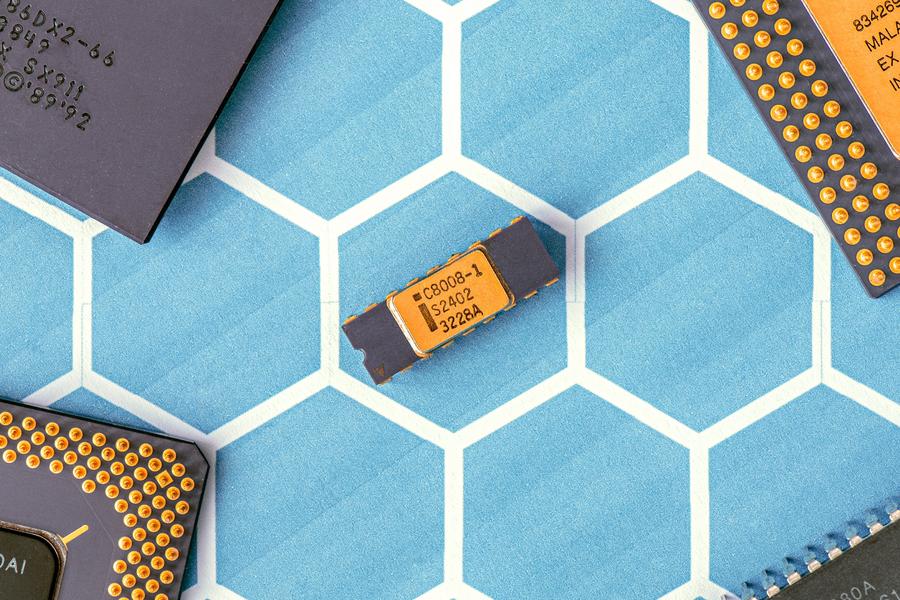 ● HYC’s turbulent operating income is a result of its unitary service and high customer concentration rate, as it has relied heavily on the panel display industry and on Apple.

● As a complete system solutions provider, HYC is supposed to provide a personalized service for consumers. But the R&D risk requires it to put more investment into research as well as lower costs.

Affected by COVID-19, HYC’s performance declined to some extent, due to the lag in product shipment and equipment acceptance. The firm’s operating income dropped to CNY 0.61 billion, a decrease of about 12.99%. Nevertheless, even under this situation, HYC still made progress in its business expansions.

HYC has been trying its best to conduct expansions over these two years to cope with the issues around unitary service and undiversified customers. Specifically, it plans to enter the semiconductor detection market and acquire TCK – a provider of intelligent inspection equipment. When approaching the third quarter, it obtained some orders from the semiconductor detection sector and started consolidating accounting statements with TCK. As a result, HYC’s operating income in the third quarter surpassed the market expectation to reach CNY 1.19 billion.

HYC is a tier-one solutions provider of inspection equipment and line detection system, set up in 2015. Its main products are applied in LCD and OLED panel displays, integrated circuits, car electronics and related industries. After building its presence in the semiconductor sector in 2017, HYC invested massively in its test machines and related products. Later on, it acquired TCK for CNY 1.04 billion to form a new intelligent test equipment sector in 2020.

When looking deeply into the complete system solutions provider’s operating income, we should not ignore its main risks in unitary service and high customer concentration rate. To be more precise, these two problems caused fluctuation in HYC’s operating income. As over 90% of operating income comes from its biggest sector – panel display detection equipment – the sales volume of this will directly affect its profitability. For instance, there was a considerable increase from 2016’s CNY 0.52 billion to 2017’s CNY 1.37 billion, due to the enormous sales volume of panel display detection equipment in the iPhone X. In other words, as well as relying too much on the main sector, it also depends too much on a single customer – Apple. The dramatic drop in operating income in 2018 could be seen as an example. With Apple’s lower detection system demands, HYC’s operating revenues decreased by 26.62% to CNY 1.01 billion. 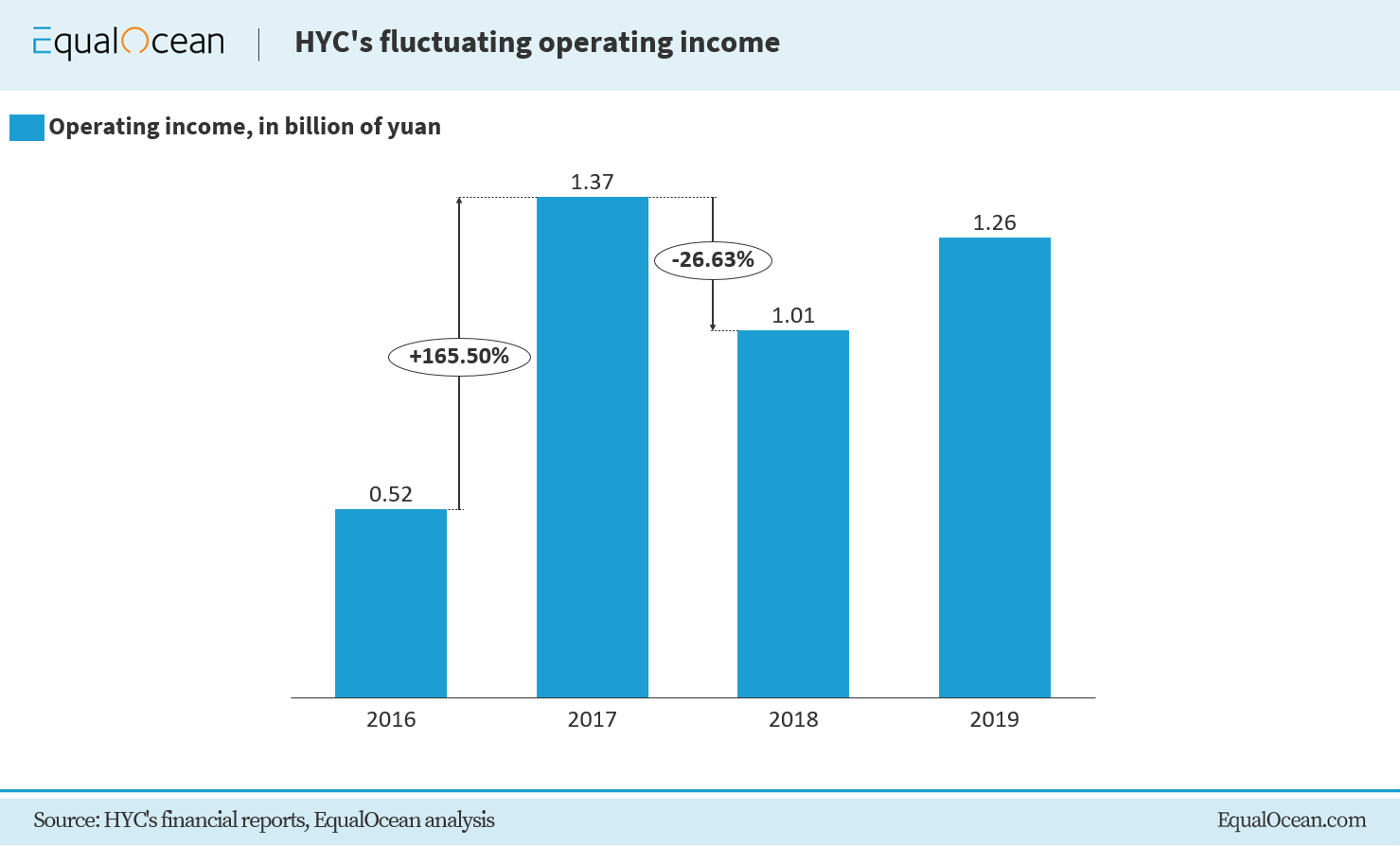 To cope with these two problems, HYC is trying to find the best possible methods. The issue of unitary business could be reflected in operating income compositions and application areas. From operating income compositions, most of HYC’s revenues are from the panel display’s detection equipment, so its operating income will fluctuate with this industry. But why did the complete system solutions provider choose the panel display as its primary sector? This may due to the increasing competitiveness in China’s panel display industry, as the governments came up with policies to promote this industry, such as the ‘innovative development’ plan. Moreover, as OLED has thinness and flexibility features, it was widely applied in smartphone markets, so HYC focused more on it to earn profits. However, a slowdown of panel display sales volumes will harm the firm’s operating incomes dramatically. Hence, HYC is trying to enter the semiconductor detection market to diversify its unitary service risk. Regarding HYC’s application areas, 90% of its operating income is from the consumer electronics field. To be more precise, the firm focused on smartphones within this field, as its major clients are Apple and Samsung. To widen the consumer electronics field’s layout, the complete system solutions provider utilizes acquisition to participate in the wearing detection industry. As iiMedia said, the wearing detection industry has gained more and more attention these days, 66.5% of consumers purchase smartwatches to monitor motion data. Hence, by acquiring TCK – the smartwatch provider – HYC could provide consumers with better testing services. Surprisingly, the acquisition of TCK contributed a lot to the firm’s performances in the third quarter of 2020, about CNY 0.18 billion.

When it comes to the problem of high customer concentration rate, Apple – HYC’s largest client – should not be neglected. In other words, most of the firm’s operating incomes are from Apple, as Apple accounted for 75.13%, 91.94% and 66.52% of income sources in HYC from 2016 to 2018. The high concentration of clients will exert a negative effect on firms’ operations. If firms’ technical skills cannot meet big clients’ needs, they might lose clients in the future and see their development impeded. Therefore, it is necessary for the complete system solutions provider to expand consumers. Thanks to its efforts so far, HYC is vastly increasing its sales productivity on BOE Technology Group – an IoT firm. For example, its sales incomes from BOE Technology Group risen from 2016’s CNY 2.6 million to 2018’s CNY 8.55 million. Also, HYC  keeps stable relationships with Samsung, LG and Sharp. 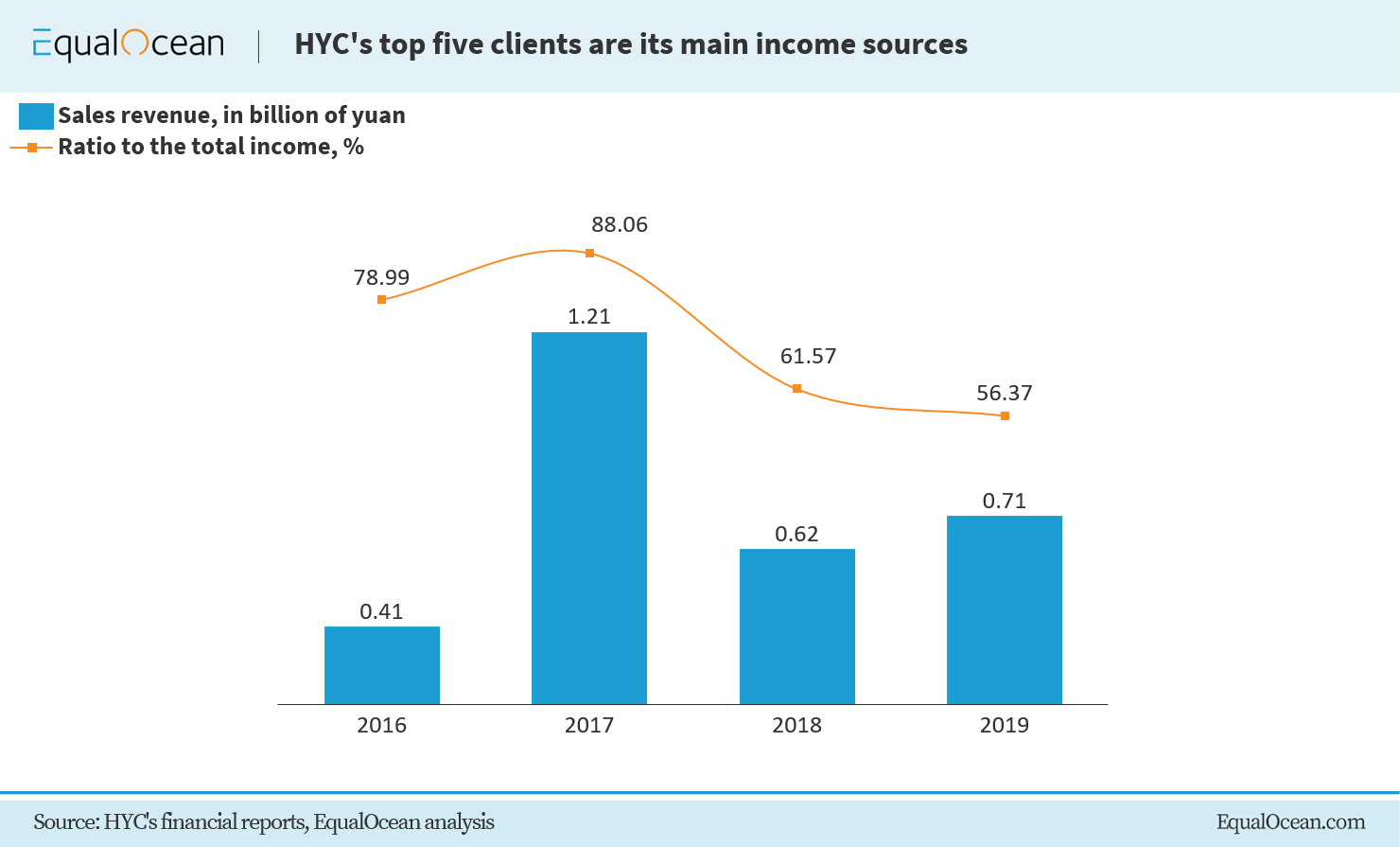 Except for unitary service and undiversified customer risks, the firm also faces R&D risks. As the detection equipment industry requires customized services for its clients, firms are supposed to put much money into the R&D. However, consumer electronics products need quick updating. If HYC’s R&D ability could not match with consumers’ innovative speeds, it may face the risk of losing customers. Moreover, the firm’s R&D expense ratios are also pretty variable. Although it obtained 15.34% in 2019, the rate was still lower than competitors’ 16.68%.

In a word, HYC’s development path can be divided into two parts. One is to keep its leading position in the panel display detection industry, expanding its significant clients. Another one is to increase its R&D on semiconductor equipment, exploring new ways to earn profits. Even if R&D in the semiconductor industry does not create immediate returns, it is still possible that HYC’s efforts may bring a considerable return in the future.