Analyzing one of the youngest mavericks in the Chinese digital economy.

In this article, EqualOcean analyzes Dada, touching upon the key trends and prospects of China's local on-demand retail and delivery markets, the 'lower-tier cities' narrative, as well as the company's network and business model's competitiveness.

In this quarter, Dada's net revenue reached CNY 1.30 billion, a year-on-year increase of 85.5%. Meanwhile, the net loss was CNY 434 million, narrower than the CNY 458 million recorded in the second quarter but higher than the first quarter's CNY 279 million. The 'margins aren't the priority' mantra – which is explained in another EqualOcean piece – seems to remain an important element of Dada's strategic layout.

Segmentwise, the revenue from 'local on-demand delivery platform' Dada Now increased by 81.3% year-on-year to CNY 719 million. In contrast, JD Daojia (JDDJ), which goes by the 'online on-demand retail platform' identity, generated CNY 583 million, or 91.0% more than within the same period 2019. 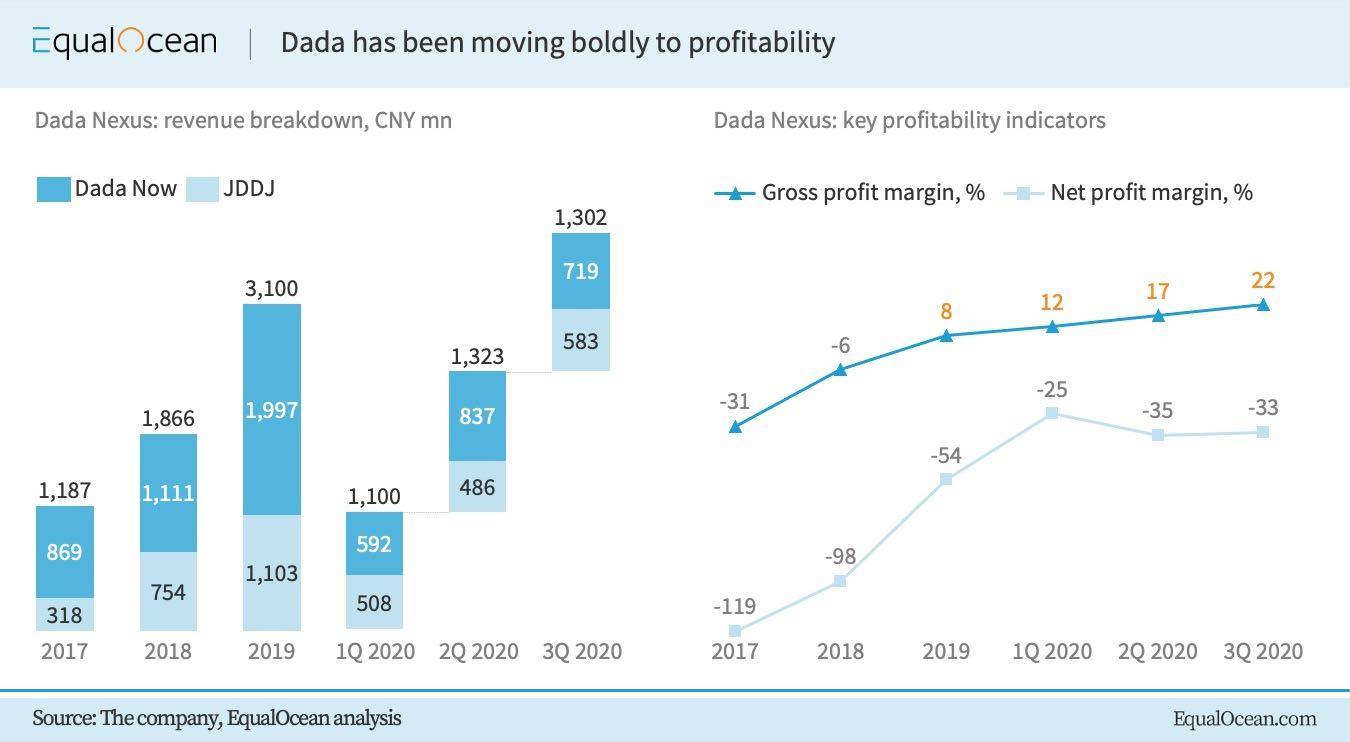 From 2017 to 2019, Dada's revenue nearly tripled; during the COVID-19 outbreak in China, its growth remained stable. The gross profit margin has been continuously improving from -31% in 2017 to 22% in 3Q 2020, mirroring its strong cost control capabilities. Simultaneously, its losses have been gradually narrowing, from 119% of revenue in 2017 to 25% in 1Q 2020. Since then, however, the net profit margin has declined, reaching -33% in 3Q 2020: besides the increasing cost of R&D (Dada continued to "strengthen its technological capabilities"), growing professional service fees (due to its new 'public' status) and some other categories, the fierce competition in the space and the expansion efforts in China's lower-tier cities led to larger marketing costs, which turned the ratio down. 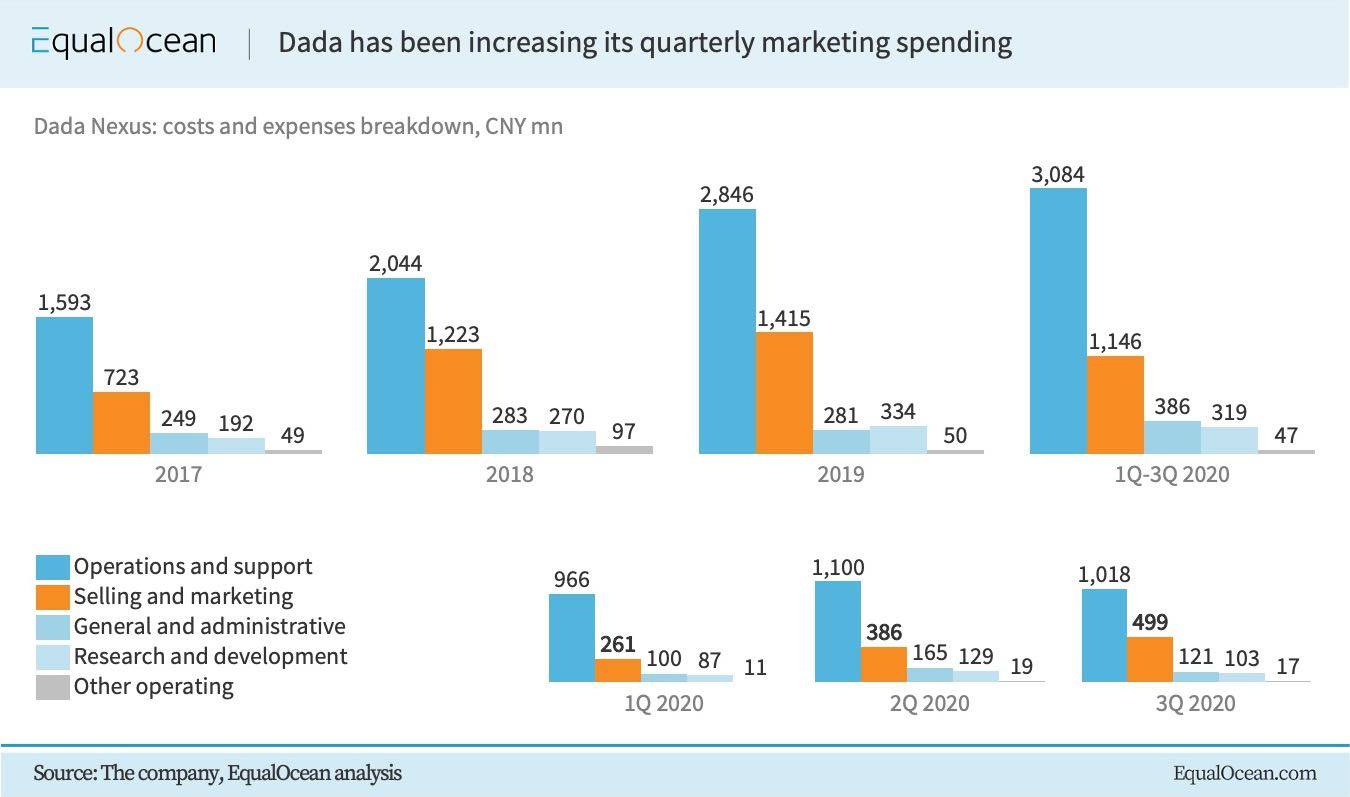 Dada's selling and marketing expenses have been the only cost-side category growing throughout 1Q - 3Q 2020. Although the company is getting traffic support from JD Group (JD:NASDAQ), its key competitors – Meituan (03690:HK) and Alibaba-backed Ele.me – should not be underestimated the post-pandemic phase of the user acquisition rate.

According to iiMedia Research, the number of users in China's instant on-demand delivery industry will reach (in Chinese) CNY 482 million in 2020. The researcher also projects the number of orders countrywide to grow at a 31% CAGR from 2019 to 2023. Simultaneously, the market penetration growth slows down: the country's user base added an extra 26.8% in 2017, but only 14.5% in 2020. Thus, the scope expansion and GMV boost are likely to become Dada Nexus' next priority. 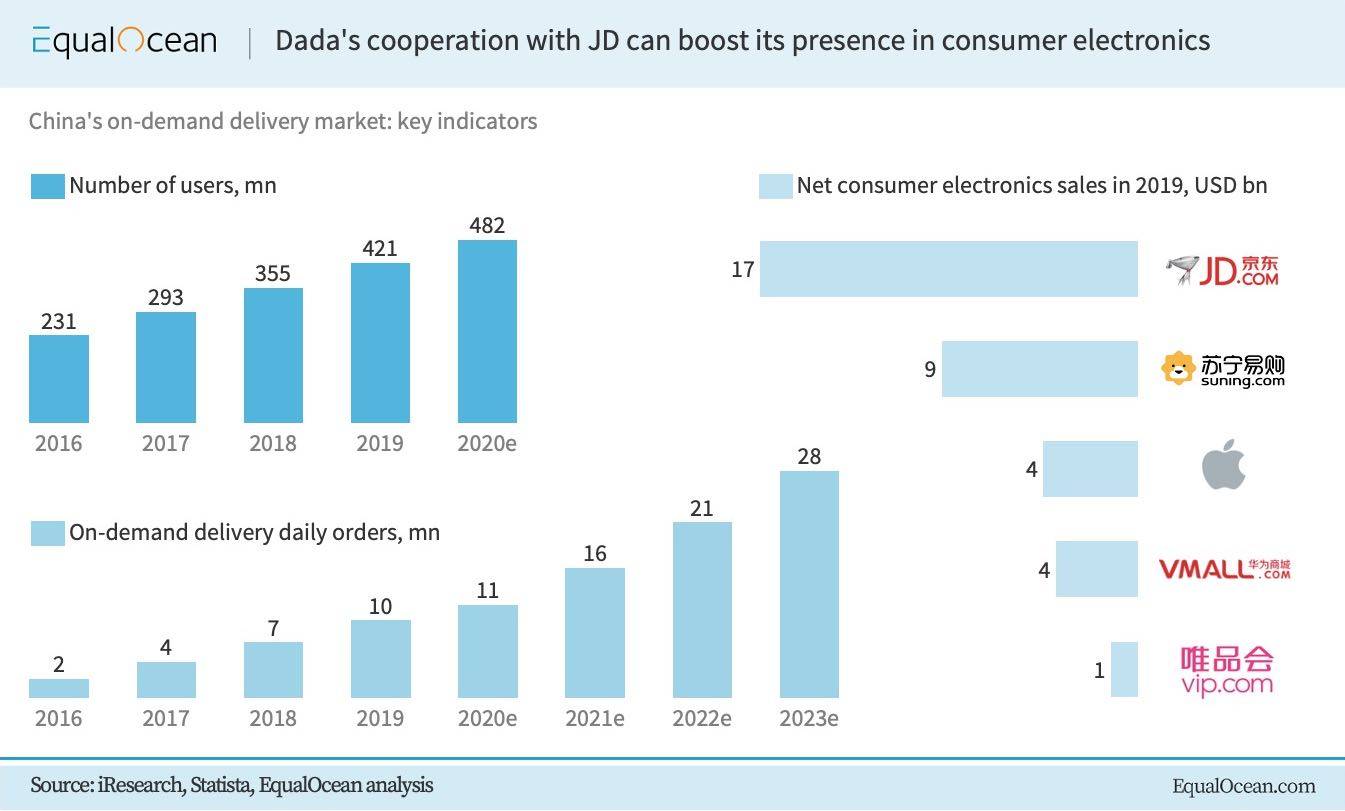 During the earnings call, Dada Nexus' representatives stated that the company would continue to enter new categories, including consumer electronics. Data aggregator Statista projects the total revenue of this segment in China to reach USD 152 billion in 2020, growing at a 2.8% CAGR in 2020-2025. While the growth seems flat, JD Group's dominant position in the area is likely to back Dada's endeavors. (The Chinese e-commerce behemoth owns 47.9% of Dada Nexus, with three board seats, according to the June 5, 2020 version of the delivery platform's prospectus.)

Up to now, Dada Now and JDDJ have covered 2,500 and 1,200 counties, districts and cities nationwide, respectively. And the company is apparently just getting started, planning to continue to make efforts in the so-called lower-tier cities. McKinsey's 'China consumer report 2020' considers 'Young Free Spenders' in lower-tier cities as of today's growth engine. With relatively low work pressure and an underdeveloped sense of saving, they possess tremendous spending power. This segment accounted for only 25% of McKinsey's survey sample but was responsible for 60% of 2018's total spending growth over 2017.

The lower-tier cities' purchasing power has been skyrocketing. The number of households with annual disposable income of CNY 140,000 - CNY 300,000 in tier-3 and tier-4 cities grew more than thirteenfold from 2010 to 2018. By comparison, the tier-1 and tier-2 cities' figure was up less than sixfold over the same period.

Dada has already started making its way into these promising geographies, with a spectacular speed: in 3Q 2020, the sales volume in lower-tier cities increased by 170% year-on-year.

Meituan and Ele.me are JDDJ's main rivals in the instant delivery market. Meituan's 'Paotui,' for one, targets a wide scope of products, largely overlapping with that of the Dada's platform. Whether they are direct competitors in a narrow sense, the combat for delivery channels from supermarkets and stores to final consumers is not likely to end even in the long term. 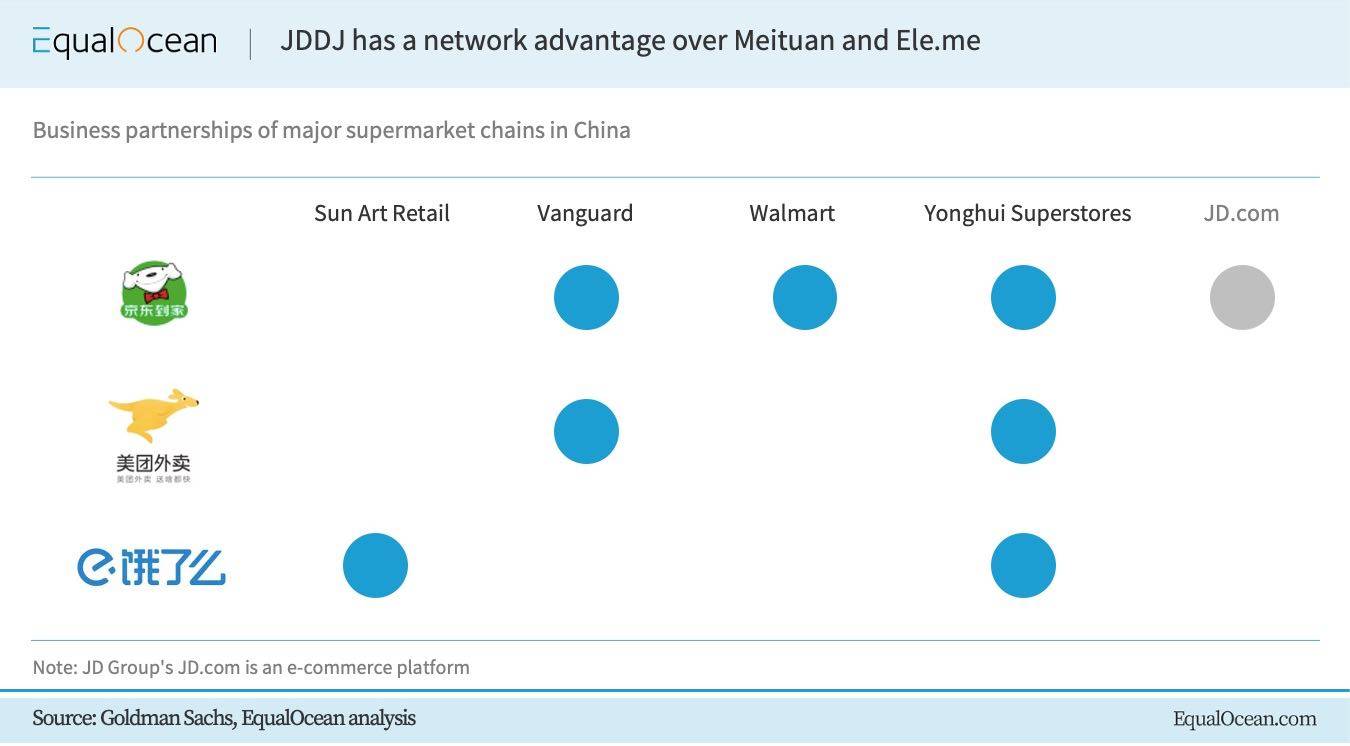 Walmart, Dada's second-largest shareholder, possesses 10.7% of the company. JDDJ has an exclusive partnership with the American chain, in league with its major backer – JD Group. Meituan and Ele.me, are lacking the negotiation power in the on-demand delivery sphere.

There is a challenge, too. An excessive concentration of revenue might also bring potential risks to Dada, trying to improve this situation, diversifying the revenue sources. In 3Q 2020, its combined revenue from JD Group and Walmart decreased to 51.5% (in 2019, it was 64%). According to the company, it has partnered with two-thirds of China's 100 largest retailers to date.

Crowdsourcing and the 'asset-light' model

Dada, Meituan and Ele.me all applied crowdsourcing models to address the challenge of frequent fluctuations brought forward by the nature of on-demand orders. Although this model effectively reduces labor costs – as the riders are not employees of Dada – the management process appears to be relatively challenging. To ensure delivery quality, the company needs to make extra efforts. Its no-warehouse attitude is another special trait. In most cases, the lack of tangible assets is a good thing for a platform business; yet, if we look into the history, pure digital platform businesses have barely lifted any firm beyond the mid-size status. (There are a few famous exceptions in the ride-hailing industry though.)

We hold a rather bullish opinion on the mid-term prospects of Dada Nexus in China. Whilst the recent leap in its stock price might be slightly overshooting, the company is on a clear track and geared up for cutthroat competition in the domestic market.

Check out
Read next
In depth
Automotive