Currently trading at USD 13.57 per share, Chinese wearable vendor Huami, with its continuously growing business, commitment to the healthcare vertical and the domestic market and extended cooperation with Xiaomi, is still significantly undervalued. 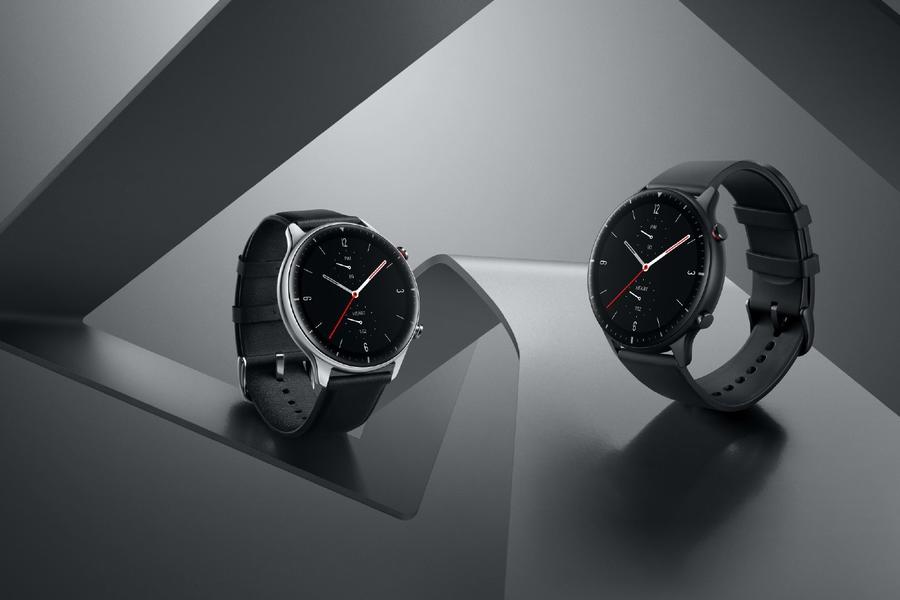 ● In the first three quarters of 2020, Huami Technology's revenue growth slowed down with the net profit declining year-over-year.

● Having previously benefited from Xiaomi's marketing and sales channels, Huami's recent attempts to build its own brand power, expand its self-branded products and develop distribution channels pulled down its net profit.

● The increasing expenses are likely to be paid off in the next few years.

● Huami's three-year extension of the cooperation with Xiaomi will drive its future revenues, supporting the in-house product development.

● The expanding R&D and marketing expenses in late 2019 have already shown some effect this year, as Huami has released more self-branded products than ever in 2020.

● Huami's current valuation multiples are significantly lower than those of its direct competitors and most other Xiaomi ecosystem companies in the consumer electronics sector.

● Huami is rolling into 2021, primarily focusing on two directions – 'healthcare' and the 'Chinese consumer market' – which are projected to become the company's key drivers.

Huami (HMI:NYSE), a China-based US-listed company, has revealed its third-quarter financials in 2020, indicating growth in unit sales and revenue by 16% and 20% year-over-year respectively. The revenue grew to CNY 2.24 billion during 3Q 2020 from CNY 1.86 billion in 3Q 2019, while the total unit shipments also climbed from 13.7 million units in this quarter last year to 15.9 million units in 2020. The revenue in this quarter surpassed its outlook made in 2Q 2020. 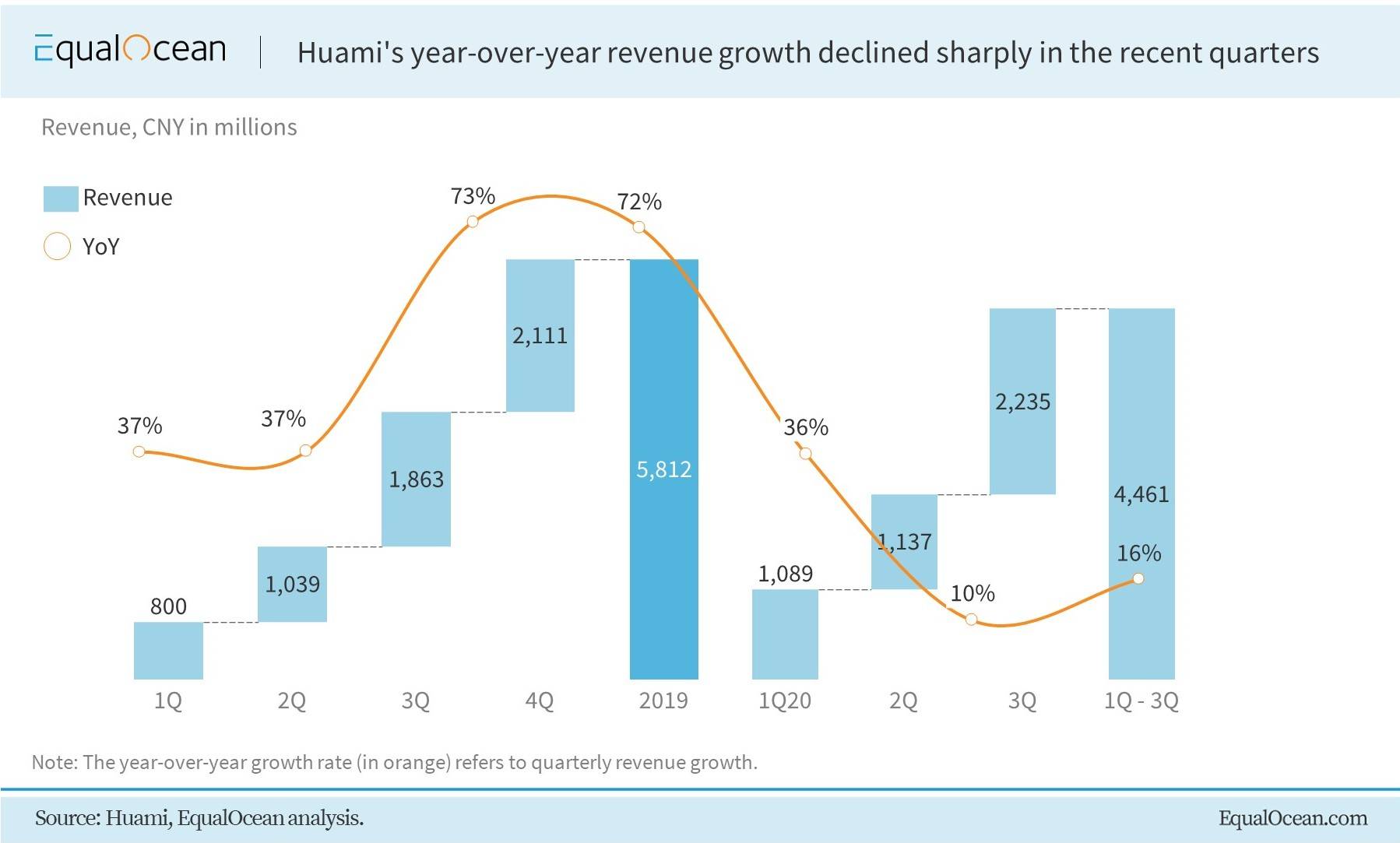 Though the company's revenue increased, the net income has declined sharply due to the growing R&D and marketing expenses, which resembles the last quarter. During the third quarter, the R&D expense showed a year-over-year growth at 38.8%, hitting CNY 172.9 million and comprising 7.7% of the total revenue. Meanwhile, the sales and marketing expenses presented an astounding year-over-year rise at 104.2%, reaching CNY 115.6 billion. The rocketing expenses and the low-margin Xiaomi products from Huami have combined to pull down the company's gross margin from 25.2% in the year-ago third quarter to 20.6%.

Why is the stock worth more? – Valuation drivers

1. The cooperation extension with Xiaomi

Xiaomi-branded products, represented by the Mi band series, in the short term will still be the largest revenue generator – though they might not be the key driver. Huami, as one of Xiaomi's most essential 'ecosystem' partners, takes the role of developing Xiaomi's Mi band, Mi watch, and Mi scale. Taking around 70% of Huami's total revenue in 2019, and the CFO Leon Deng reconfirmed in the investors meeting that the proportion of Xiaomi's product has not changed from the number in 2019, the revenue generated from Xiaomi products currently supports the company for future growth. Besides, bearing the AI and IoT development as the core strategy, Xiaomi is quite likely to further drive its wearable products shipments around the world, and the products will correspondingly have more functionality.

During the third quarter of 2020, Xiaomi became the third-largest smartphone shipper worldwide, taking 13% of the total with 46.5 million units. This indicates a profound user base and brand power. Xiaomi's brand cohesion and smartphone community could bring high price-efficiency lifestyle products and make them easier for people to accept. Besides, as the company's CEO Huang Wang addressed in the investor meeting on November 23, 49.5% of its shipments happen in countries and regions outside mainland China. In the global market, it has a leading position in Spain, Indonesia, and achieves over 200% year-over-year growth in India and Western developed markets. Huami’ global layout is largely overlapped with Xiaomi's. Consequently, as Huami's major shareholder, Xiaomi is in the proper position to empower Huami with its established overseas distribution network.

Since the last quarter of 2019, the company has been constantly increasing its R&D and marketing expenses, which significantly pulled down the company's profitability. However, the changes brought by the R&D and marketing investment is somehow significant. The product chart tells that, during recent quarters, Huami pushed apparently more self-branded products than in 2018 and 2019. Besides the increasing new products, healthcare and AI functionality also enhanced with the watches' health management system and speech interactions. In the previous analysis, we considered Huami's cooperation with Xiaomi that saved its sales and distribution expenses as one of its major advantages. However, to achieve its product positioning as the connector between technology and healthcare and gradually becoming a 'self-sufficient' company, it is necessary to invest in its own products and channels.

In the trailing twelve months, Huami stock only saw a slight rise from USD 11.27 to USD 13.57. However, the company has performed fairly well in terms of sales volume, growth rate, and product market share.

Among its peers, Huami has the highest revenue volume and growth, while the valuation multiples are among the lowest, indicating a current undervaluation. Once the upfront investment in the R&D and marketing for its self-branded products begins to bring enough scale effect and drive the company's net margin from the current 5% to around 10%, per our estimation, the market will pull up its stock price timely.

4. In the year 2021, two tags of Huami – 'healthcare' and the 'Chinese market' – will be favored by both the capital and the consumer market

As IMF's recent global economic outlook suggests, China's economy will be on the upside and will possibly be the only country presenting growth in 2020. Similarly, next year, as long as the pandemic remains under control, the retail market, as well as the supply chain in China will perform better than other countries. 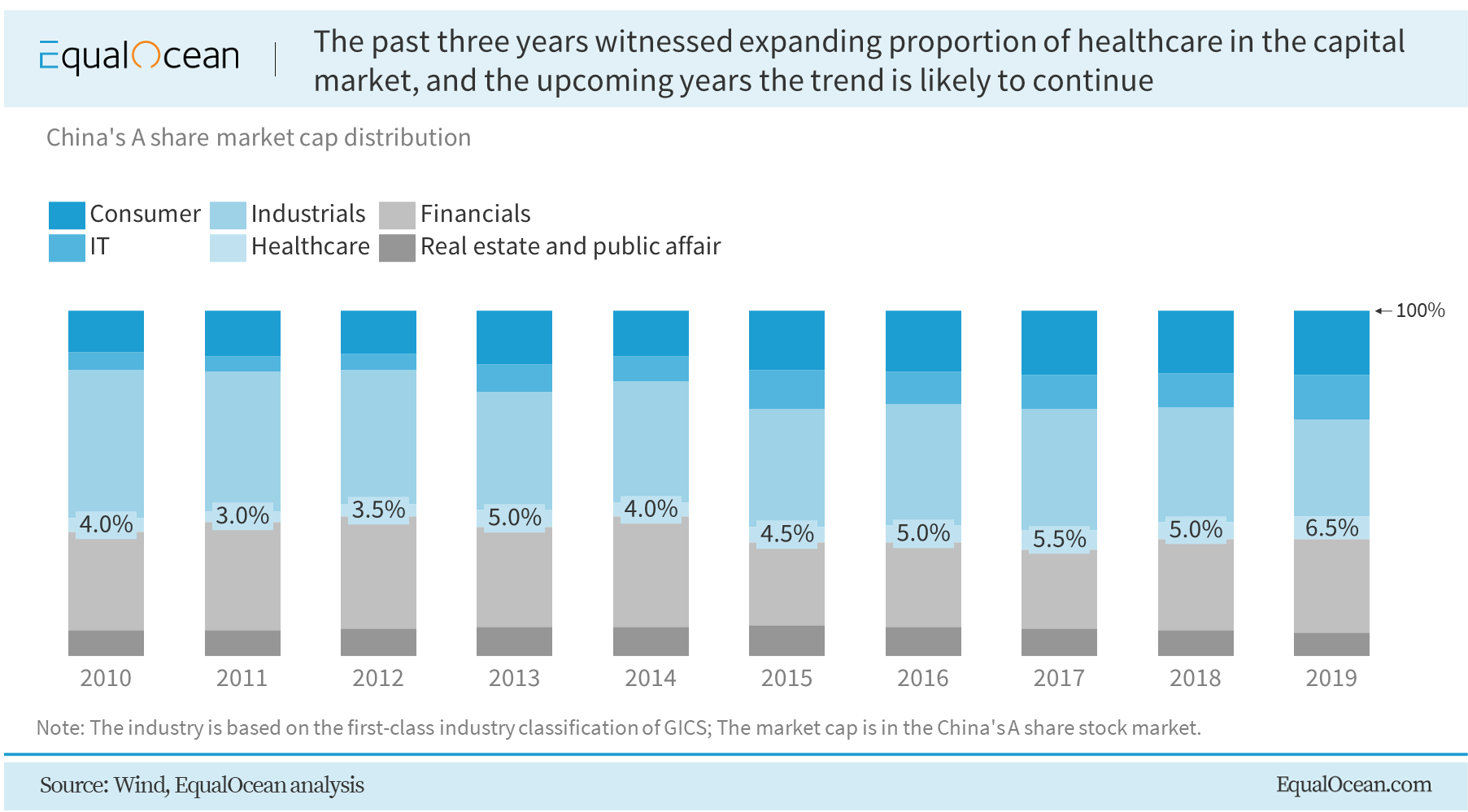 Domestically, with the pandemic effect combined with the growing awareness of healthcare in China, health-related product sales will keep a rising trend. Besides, as the above chart indicates, recent years drew an upward trend for the healthcare sector in the capital market. Huami will somehow benefit from this positioning in 2021 as well.