The telecoms tower behemoth's shares have been sliding since the beginning of 2020 – we explain why. 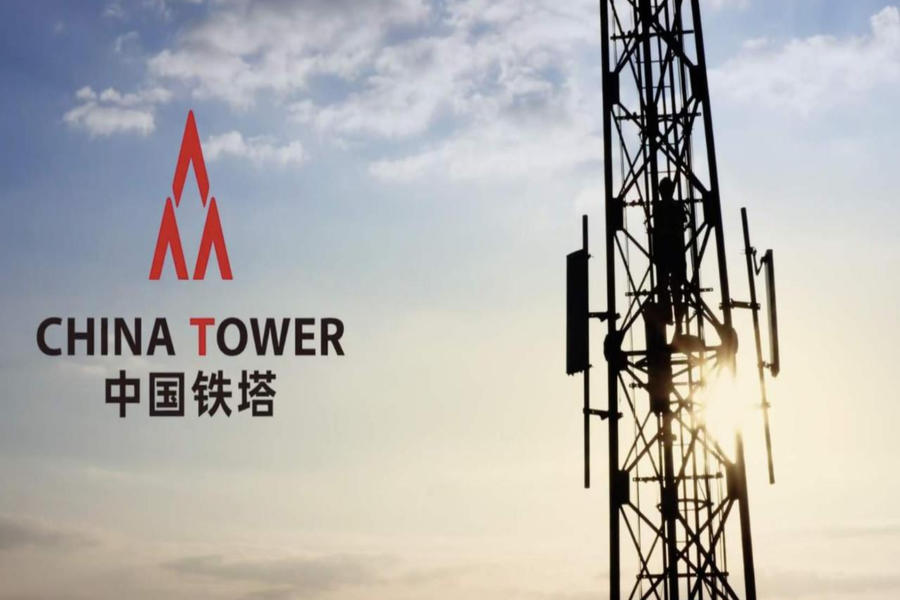 On November 27, at the World 5G Convention, Jilu Tong, the chairman of China Tower (00788:HK), said that his company had built over 700,000 5G base stations in China, 97% of which were transferred from existing 4G sites. It means the company has helped operators complete the target they set at the beginning of 2020 a month early. However, in contrast with such remarkable performance, the stock kept falling throughout the whole of 2020.

China Tower has a strong moat…

Competition and user stickiness do not seem to be responsible for the decline. China Tower is the largest communication tower service provider in the world. Supported by the Chinese government, it was founded by China Mobile (00941:HK, CHL: NYSE), China Unicom (600050: SH, 00762: HK, CHU: NYSE), and China Telecom (00728: HK, CHA: NYSE) in 2014. In August 2018, the company listed its shares on the Hong Kong stock exchange with an issue price of HKD 1.26 per share, raising over HKD 50 billion, making it the largest IPO since 2010 in Hong Kong Exchange. The company is located in the midstream of the communication industry chain. Its profit model is based on providing services to tenants and collecting stable rental income. The major downstream customers are China's three major telecommunications service providers (TSPs). The company signs long-term service agreements with customers, with the service period of its products usually being five years.

The number of tower stations and tenants in China is far ahead of other countries. Meanwhile, tower resources are highly concentrated in certain entities the world. There are only a dozen companies that own more than 20,000 towers, and they take 80% of the market share. Among all the tower companies, China Tower has built over 60% of the communication towers globally (in September 2020) and the amount has reached 2.02 million, which is 11 times the number of the second winner, AMT. The number of its tenants is also far more than that of other comparable companies, with a total of 3.34 million in 2019, 10 times that of the second player, American Tower. 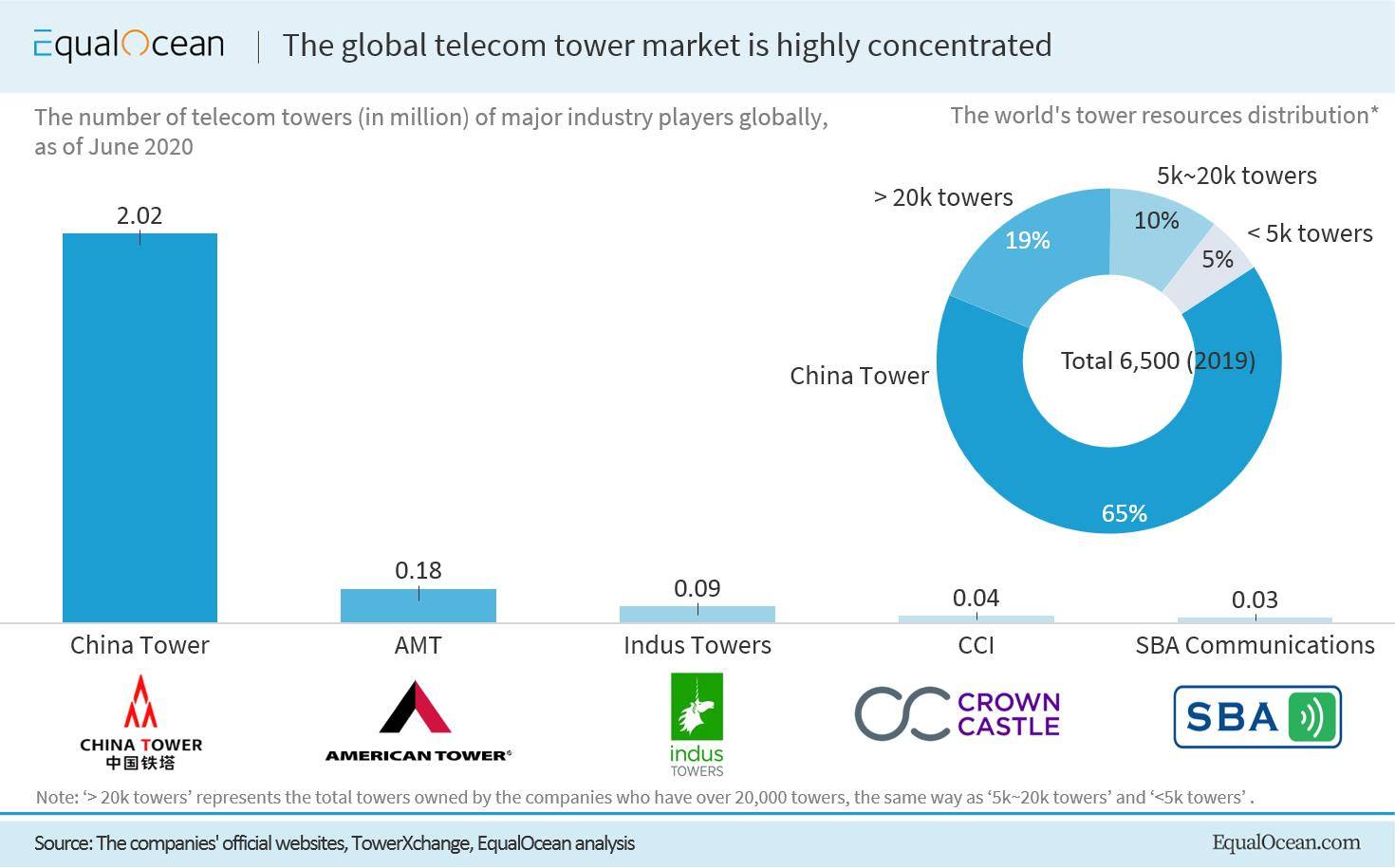 …but low profitability seems to be an issue Although China Tower's revenue is much higher than that of its global competitors, its net profit is much lower than theirs, which seems to be the direct reason for the continuous decline of its stocks. In 2019, China Tower's revenue reached USD 10.98 billion, 1.45 times that of AMT, but it only gained CNY 5.22 billion (about USD 750 million) in net profit, less than half of AMT's net profit (USD 1.89 billion). In 2018, the company extended the amortization period of tower assets from 10 years to 20 years to relieve the impact on short-term profits. However, though its net margin increased from 3.6% to 6.7%, the ratio was still further lower than its competitors like AMT (24.1%), which deteriorated the momentum of its stock.

Supported by the Chinese government and the three TSPs, China Tower is definitely a company to watch. Although it is a beneficiary of the countrywide 5G rollout, the share price of China Tower has been declining since the beginning of 2020. Apart from the superficial reason that the growth of the company's core tower business is not as expected, we think there are two core reasons: weak pricing power and low-profit margins of 5G-related businesses.

In terms of pricing power, in essence, China Tower can be regarded as a services unit of the three TSPs, because they own 69.1% shares of the company. Bolstered by the 'New Infrastructure' concept, China Tower, however, has almost no customers except for these major telcos, which accounted for 96.4% of the total revenue sources in the first half of 2020. Besides, almost all engineering tasks of the company are outsourced. The construction of a new tower type station should be approved by at least two of the three operators, otherwise, the project will be hard to build. In addition, the three companies have the right to build their own communication system in areas under 30,000 square meters, especially in urban areas, where it is difficult to build large towers. The three points make the bargaining power of the company weak. In recent years, the revenue growth of the whole communication industry is slower, while operating costs are higher at the same time. Such a situation further deteriorates the pricing power of the company.

As for the profit margins of 5G businesses, although great efforts have been made to develop the 5G technology in China, 5G technology faces two important difficulties: the high cost of base stations and lack of application scenarios.

At the same time, power consumption increases dramatically from 4G to 5G. At present, the average power consumption of a 5G outdoor base station is about 3.8 kilowatts, which is more than three times that of a 4G base station. Moreover, the construction cost of a single 5G station is about 1.7 times more costly than a single 4G station. According to Fengyi Yang, vice-chairman of China Telecom Technology Innovation Center, the overall cost of the 5G network will be (link in Chinese) about nine times higher than the cost of the 4G network.

5G has the advantage in time-delay and a large number of application scenarios are generated according to this, such as smarter cities and autonomous driving. However, most of the application scenarios are still in the development stage, and the profit generated in these businesses cannot cover the high cost in short term, making the profit margins of 5G businesses much lower than 4G businesses for both Chinese tower companies and operators. According to the cost and the number of base stations, it is estimated that the 5G expenditure of operators will be up to CNY 180 billion, while the total profit of the three operators in 2019 is only CNY 138.4 billion. In such a situation, further with weak pricing power, China Tower finds it hard to generate remarkable profit in the tower business. See more details in our latest 5G report. 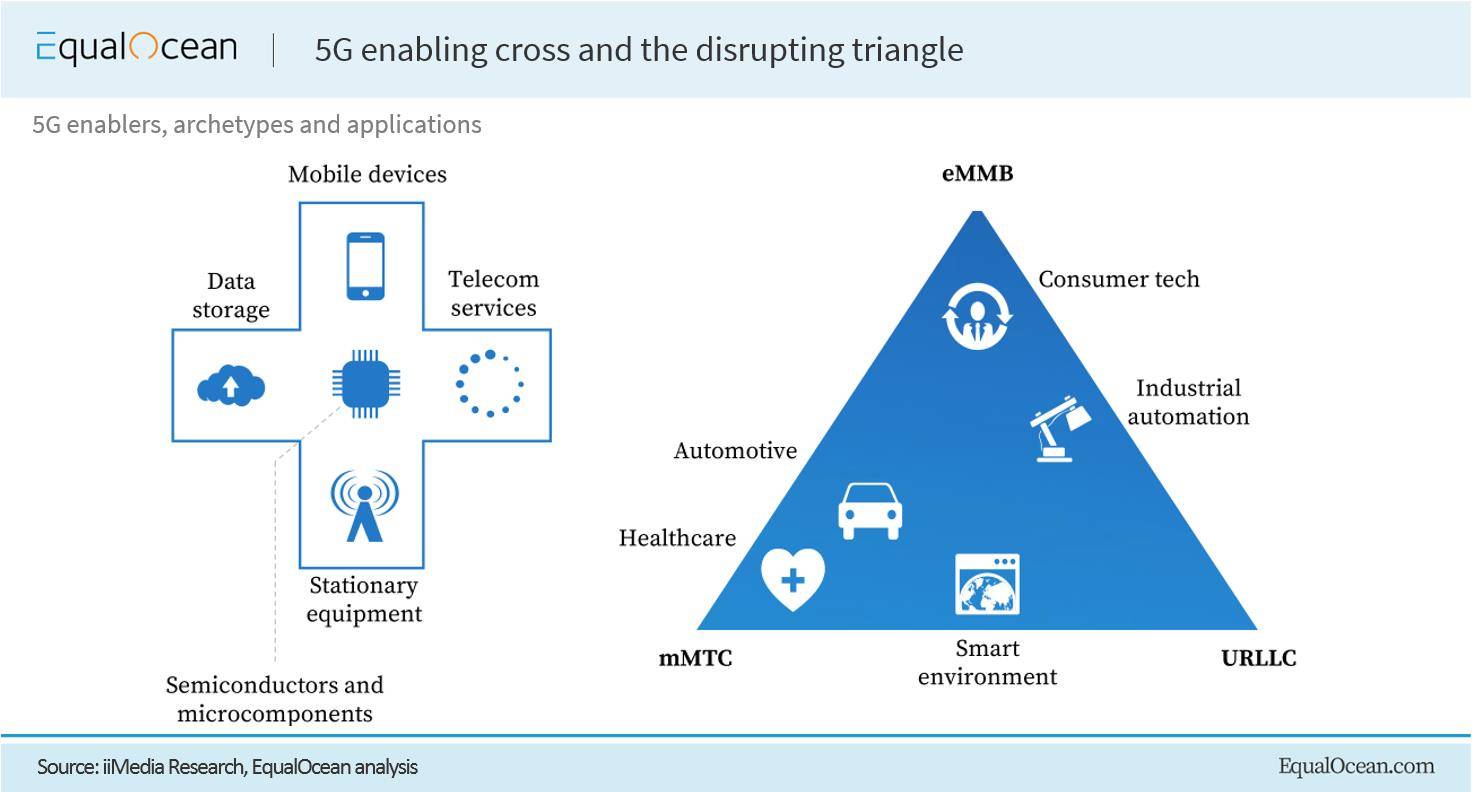 Increasing the tower tenancy ratio is key to improve its profitability. Compared with its competitors AMT and CCI, whose tower tenancy ratios are 1.9 and 2.3 respectively, China Tower's tenancy ratio is only 1.65. The company's net margin will be improved as the tenant ratio increases due to the marginal cost of new customers decreases. According to the data from Kaiyuan Securities, the gross profit rate of the single-station mode is about 21%, while that of the double-tenant mode is about 34%, and that of the triple-tenants will reach 37%.

Improving business structure by further focusing on the customers other than three operators is another key. China Tower rents signal towers to general customers – besides operators – as well. The advantage of this business is that it doesn't need to build towers but to use light poles and billboards from the government and other companies and then rent them out after transforming. The payback period is much lower than that of building a tower. Taking the streetlight market as an example, according to the data from the National Bureau of Statistics of China, the number of streetlight poles in China reached 29.35 million in 2019, which is ten times the total number of communication towers in China. With the development of smarter cities and new infrastructure, old single-function streetlight poles will be gradually replaced by smart ones. Based on the data from Arthur D. Little, by the end of 2019, the penetration rate of smart streetlight poles in the world was only about 15%. There is a large market space and the company seems to has a great chance to improve its business structure. Notably, the proportion of non-tower business revenue has increased from 6.0% in the same period last year to 9.0%, indicating that China Tower is accelerating to optimize its business structure. It is a good sign.

To sum up, we don't think this is a good time to long China Tower in the coming months due to its weak profitability and unbalanced business structure. Any generation of communication technology company suffer the problem of profitability in the developing stage, 5G is also no exception. With the rapid construction of the 5G network and the development of new application scenarios, the picture can change.

1. The largest risk factor is the tower tenancy ratio, which decides the company's profitability directly. If the company cannot find a way to further improve the ratio, it is hard for its stock to have impressive performance. [Risk: High]

3. The control from three major operators is another risk. The company's profitability could remain at a low level. However, a coin has two sides. Three operators enable the company to have a high user stickiness. [Risk: Low]