In China's post-epidemic era, chain restaurants' businesses are about to bounce back. 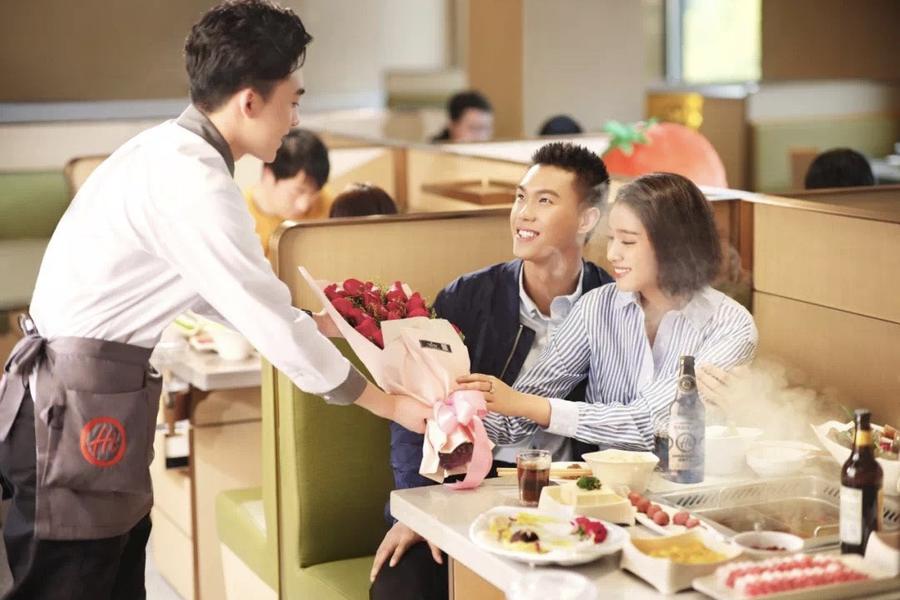 ◇ Haidilao has significant advantages over its peers in its table turnover rate, customer unit price, and upstream supply chain due to its unique service and brand premium.

◇ The technology empowerment will continue to optimize the cost structure of Haidilao in the future.

Benefiting from China's urbanization process and consumption upgrade, the catering industry has maintained rapid growth over the past few years. The market size increased from CNY 2.5 trillion to CNY 4.7 trillion from 2013 to 2019, with a CAGR of 11%. However, due to the epidemic's impact, the catering industry's revenue in February and March 2020 dropped 40% year-on-year. With the domestic epidemic under effective control, the sector's revenue in April and May recovered to 70.3% and 83.0% of the same period last year, respectively, and in September, it recovered to 99%.

The Chinese catering industry can be divided into two main categories: dinners and fast foods, accounting for 70% and 30% respectively in 2019. According to Frost & Sullivan, hot pot and Sichuan dishes ranked the top two in the dinner market, reaching 14% and 13% respectively. However, the hot pot industry has a low degree of concentration, with CR3 only 11.3% in 2019.

As the industry leader, Haidilao only accounted for 2.2% of the market in 2019. From 2015 to 2019, Haidilao achieved a compound growth rate of 47% and 71% in revenue and net profit. Although the epidemic caused the company's net profit to plummet by 200% in the first half of 2020, the rebound and recovery in the post-epidemic era created an investment opportunity.

The epidemic has spawned new opportunities

According to China Renaissance, the most popular offline consumer activity after the epidemic is eating, mainly including hot pot and barbecue. People's suppressed social behaviors and habits are gradually being eased. Due to its style of cuisine and presentation, the hot pot company's dine-in options increase interactive activities – which the populace is seeking out following the forced isolation of prior phases and forms of lockdown. Therefore, the demand for hot pot will continue. 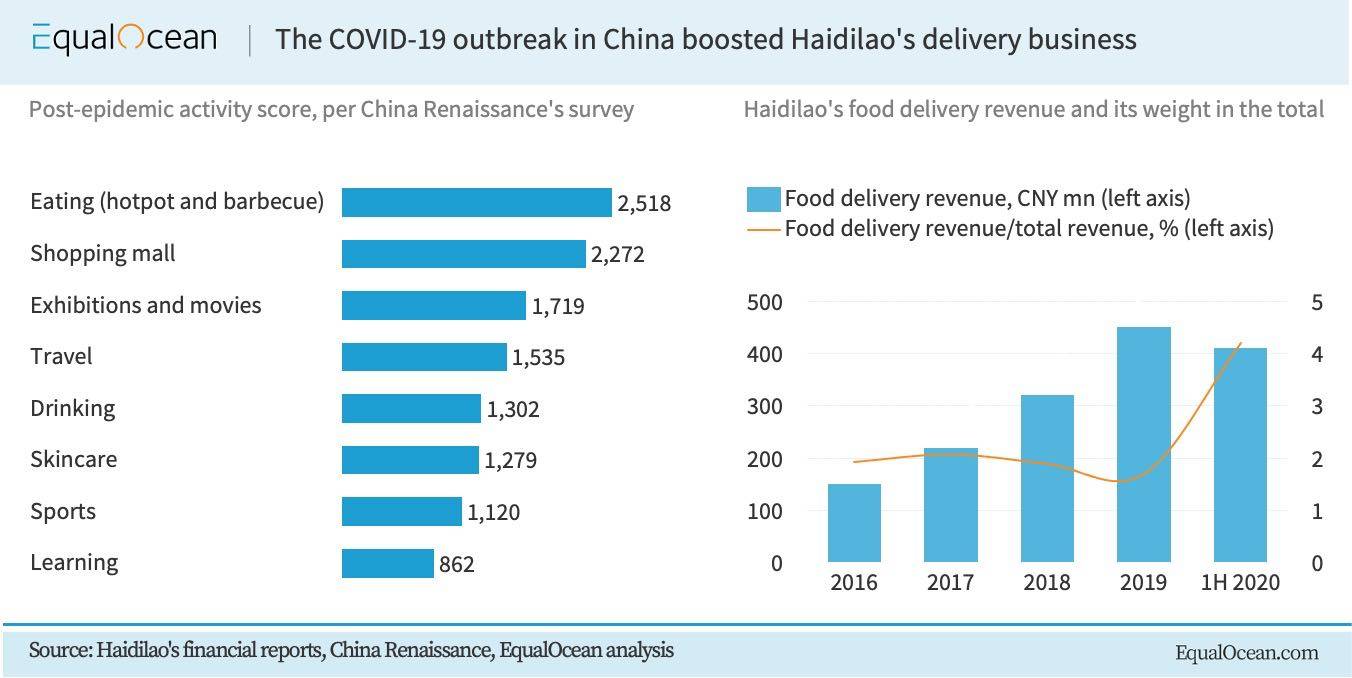 Since 2016, Haidilao has been focusing on the dine-in business. This resulted in a decreased revenue generated from the food-delivery business, accounting for only 2%. However, the epidemic has changed people's living habits, and home quarantine has forced catering companies, especially large chain companies like Haidilao, to find a new revenue growth curve.

Therefore, in the first half of 2020, Haidilao's food delivery business entered a new growth stage. The revenue for only half a year was almost the same as that of 2019, accounting for 4%. As the pandemic has penetrated every aspect of our lives, the food delivery business will bring sustainable income to Haidilao.

The attributes of hot pot assist the rapid expansion

The hot pot industry has the characteristics conducive to chain expansion as it provides standardized services: it does not rely on the chef. Also, the hot pot base, the dip, and the ingredients are unified. This attribute has doubled the number of Haidilao stores within two years and has accelerated its expansion in tier 3 cities and below. 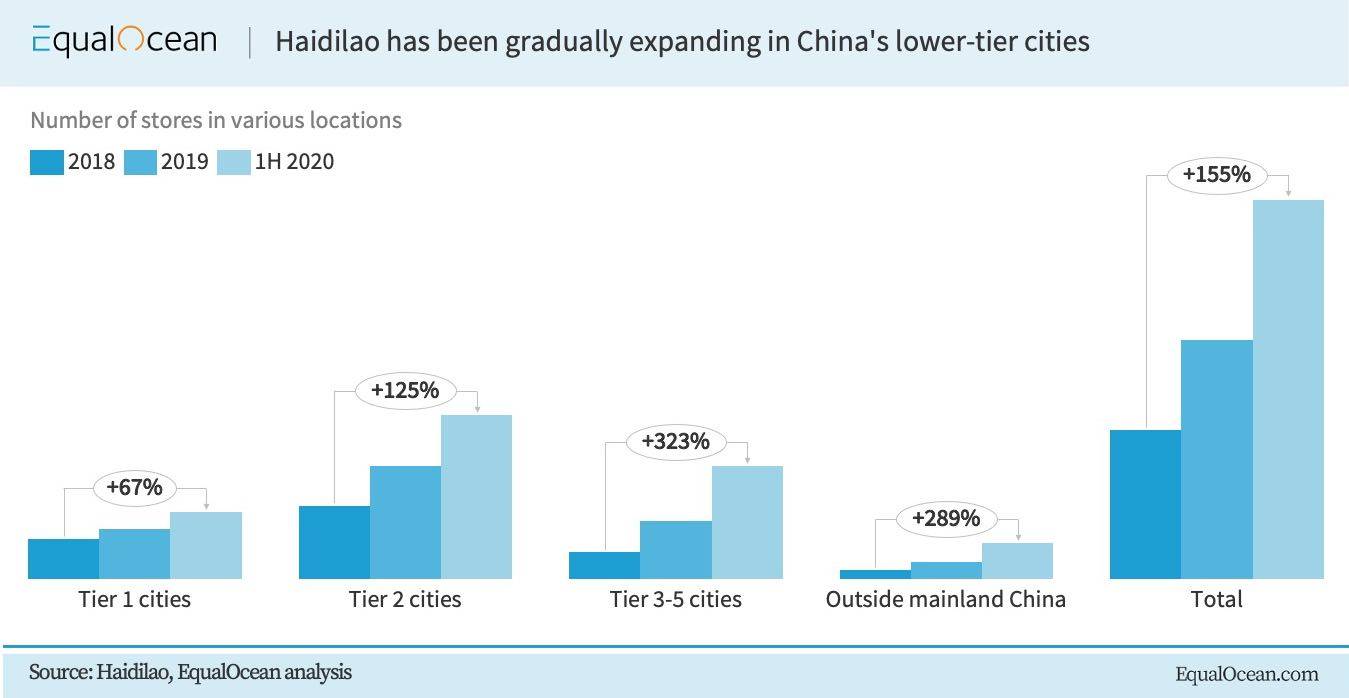 According to the annual report, first-, second-, and third-tier cities contribute approximately 20%, 50%, and 30% to the total revenue. In the past two years, the contribution of third-tier cities has gradually surpassed that of first-tier cities. Also, 80% of revenue growth from 2017 to 2019 came from new stores and sub-new stores, and 20% came from same-store growth. Therefore, the rapid expansion of low-tier cities will guarantee sustained income growth for Haidilao in the short term.

The growth of the catering industry mainly comes from the expansion of stores.

As the latter two indicators are relatively fixed, improving the first three indicators is the most critical. Haidilao is positioned as a high-end restaurant and the customer unit price is the highest. 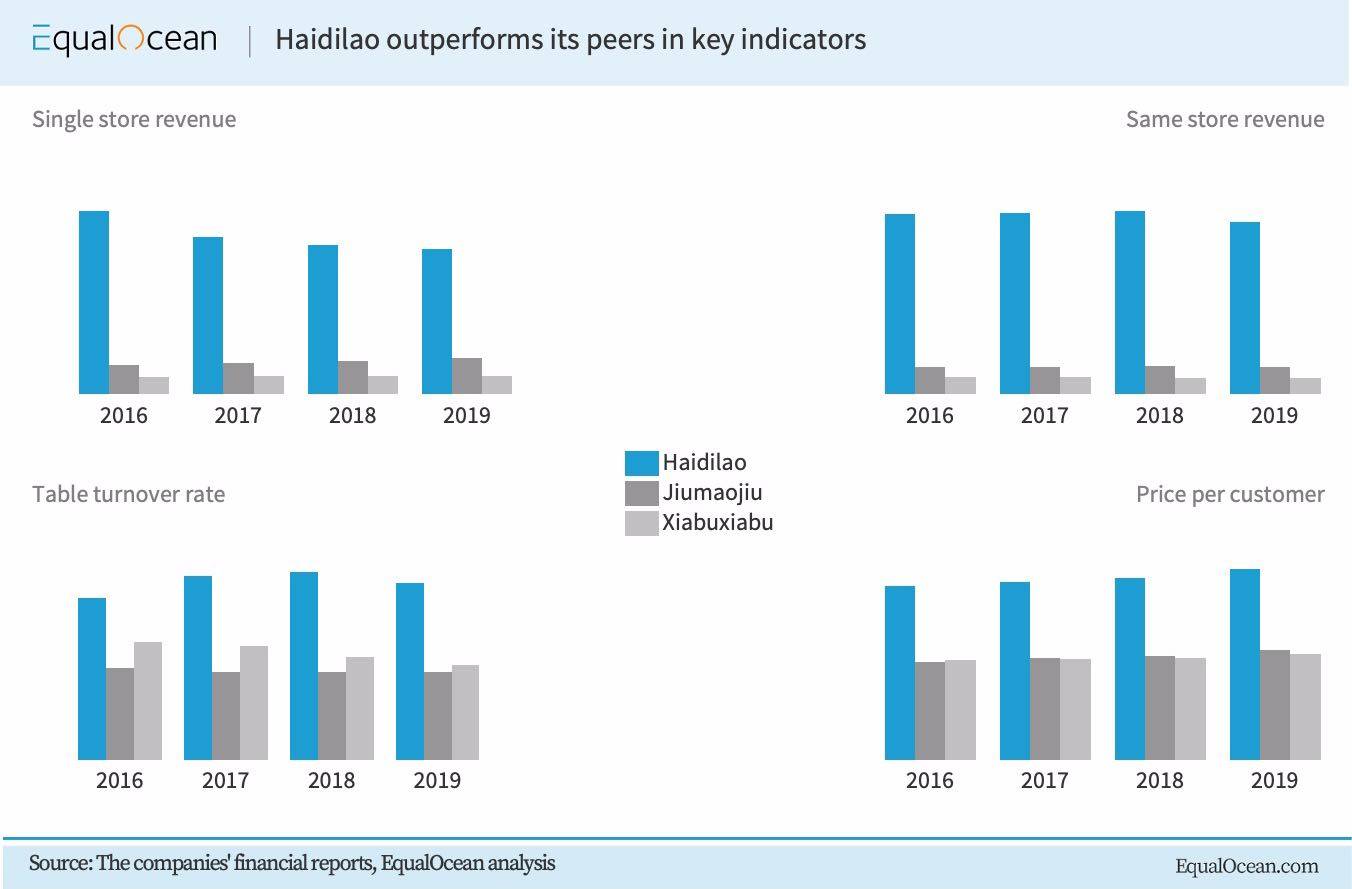 Besides, Haidilao's high table turnover rate has achieved revenue of more than CNY 50 million for a single store, diluting rental costs. Overall, with the rapid expansion from 2017 to 2019, its table turnover rate remained stable. In particular, mainland restaurants' per-customer price has also increased, effectively supporting the future growth of Haidilao. 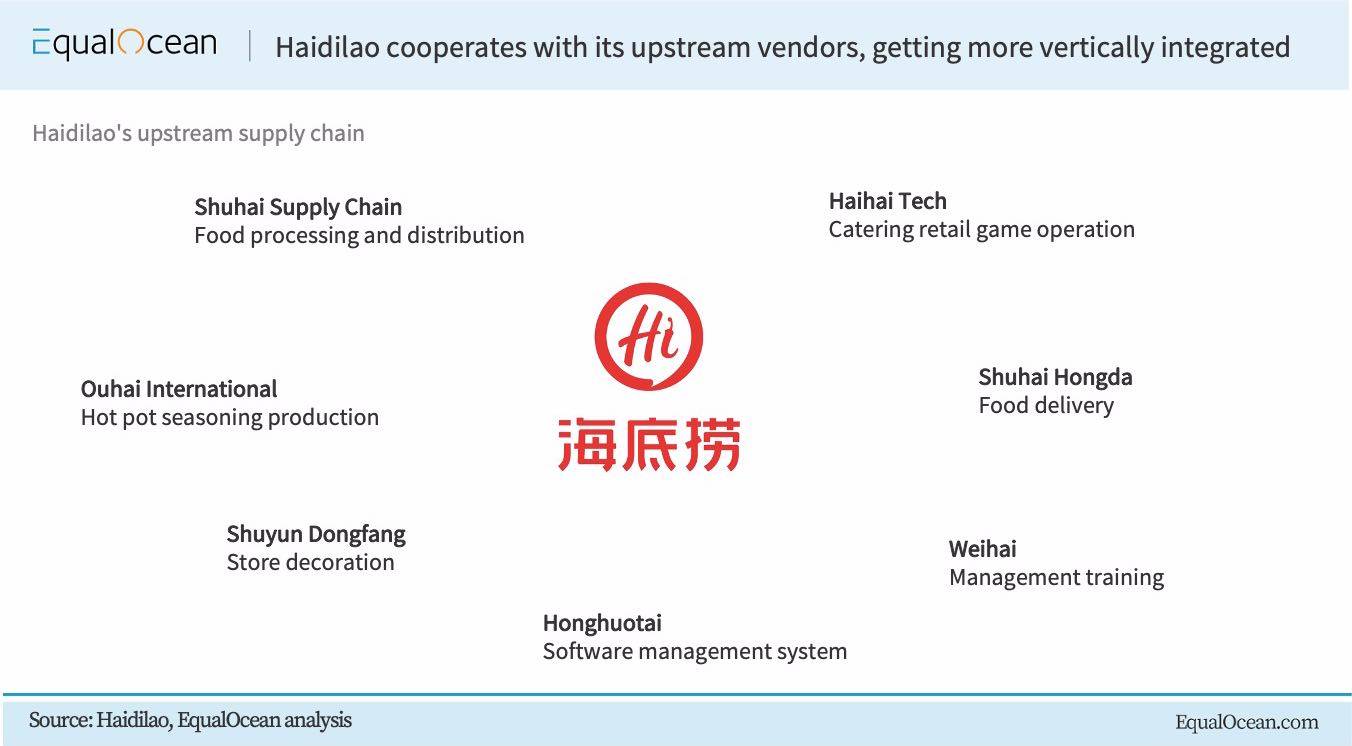 Haidilao has established a complete supply chain system. The company mainly purchases from related parties and partly purchases from third parties. Jiumaojiu and Xiabu Xiabu purchase mostly from third parties. Haidilao has more than two qualified suppliers for each type of main food ingredients and has more than five years of relationship with the main suppliers, while Jiumaojiu's numbers are 3 and 3. Xiabuxiabu worked with fewer suppliers at a specific time and had relationships with major suppliers for more than five years. Therefore, the affiliated companies established by Haidilao maintain independent operations and can implement more stringent controls on food safety and personnel training.

Compared with other players, Haidilao has the highest labor cost. However, the company established the first smart restaurant in October 2018, which opened up the potential for future labor cost control through automated vegetable delivery and distribution technologies.

According to Essence Securities, at present, the company's first smart restaurant currently has 10%~15% fewer staff than normal restaurants. As it is still in the early optimization and development stage, it is expected that automation can reduce labor demand by 20% to 30% in the mature period.

1) In contrast to the company's rapid expansion, there is a decline in same-store revenue and a slight drop in table turnover rate. 2) There have been too many food safety incidents in the hot pot industry, and Haidilao is no exception. Ensuring food quality is a top priority. 3) The recurrence of the epidemic in China and the continuation of the overseas epidemic may lead to a decline in income. 4) The company has generated excessive goodwill through the acquisition of catering brands and may face the risk of goodwill impairment in the future.

We hold a bullish opinion on Haidilao. Although the epidemic caused short-term losses to the company, offline consumption will gradually return to normal as the most severe of the epidemic's aftereffects give way to restore normality. Moreover, coupled with its peers' original advantages, such as the table turnover rate and customer unit price, Haidilao's rapid expansion in lower-tier cities will continue to generate revenue. Finally, although smart restaurants have invested heavily in the initial stage, technological empowerment will ultimately further optimize the cost structure for Haidilao.