With the development of renewable energy technologies, the photovoltaic market has begun to attract more attention. 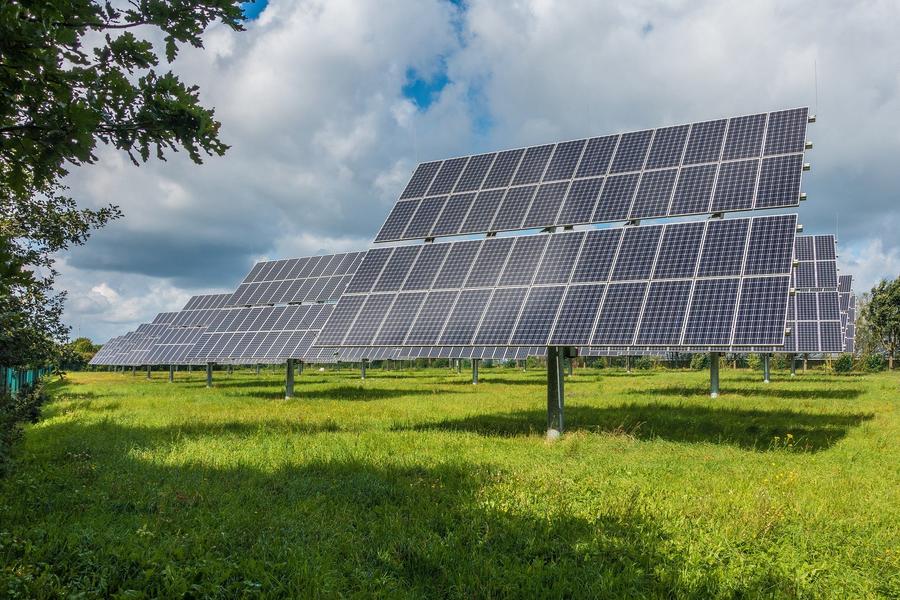 ● The intense price competition among photovoltaic firms decreased the solar modules prices, which has been affecting Jinko Solar's operating margin since 2018.

● Not only does the photovoltaic module manufacturer retain a massive share of the world's  largest.

● Jinko Solar's efforts in developing its components, including expansion of the production of monocrystalline silicon pieces, played an important role in improving its efficiency and profitability.

● The firm is facing risks due to the rising raw material price, the public's uncertain demand and volatility.

As an innovative firm, Jinko Solar focuses on providing clean energy solutions. By the end of 2020, it was the only firm that had achieved 65GW accumulative shipment quantity worldwide. In the domestic market, it was awarded as ''Excellent Photovoltaic Module'' in 2020's list prepared by OFweek.

Although Jinko Solar's total revenue decreased 11.72% to USD 3.64 billion in 2018, it started to present a rising trend from 2018 to 3Q 2020. Specifically, there was a 3.8% increase from over USD 1.19 billion in the second quarter of 2020 and a 17.2% increase from more than USD 1.04 billion in the third quarter of 2019. This was mainly a result of the rise in solar module shipments, which offset the decrease in average selling prices of solar modules. The massive decline in 2018 was led by solar modules' decreasing selling prices and declining government grants. For instance, module production's overcapacity intensified pricing competition and Jinko Solar only received CNY 52.2 million government grants in 2018, a 183% drop from 2017. Nevertheless, the decline in solar modules' average selling price still led to a 25.3% decrease in the photovoltaic module manufacturer's operating margin compared with the third quarter of 2019. In terms of the global market, the module shipment reached 120 GW in 2020, and 80% came from the top ten developed nations. To be more precise, China was ranked the first, with Jinko having the largest market share. The country is followed by the United States, Vietnam, Japan, Germany, Australia, Brazil and India. 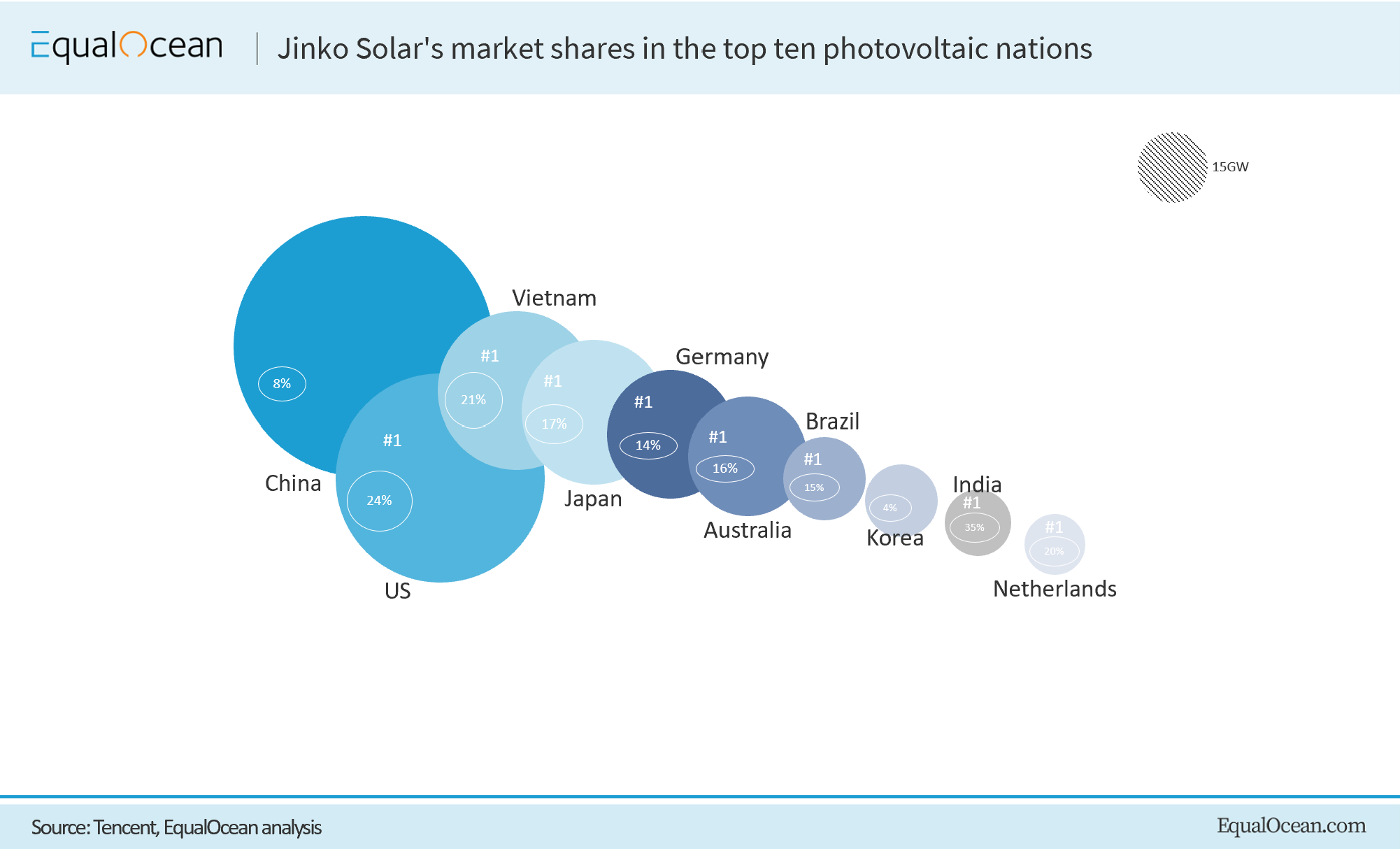 According to the International Renewable Energy Agency (IRENA), the global accumulative module shipment volume has maintained a rising trend since 2015 and is expected to reach 1722.14 GW by 2025. As photovoltaic power generation has strengths in clean and low carbon energy, it is rising rapidly in both developed and developing countries. Under this beneficial circumstance, its additional module shipments in 2021 is expected to obtain 140 GW in the best-case scenario. 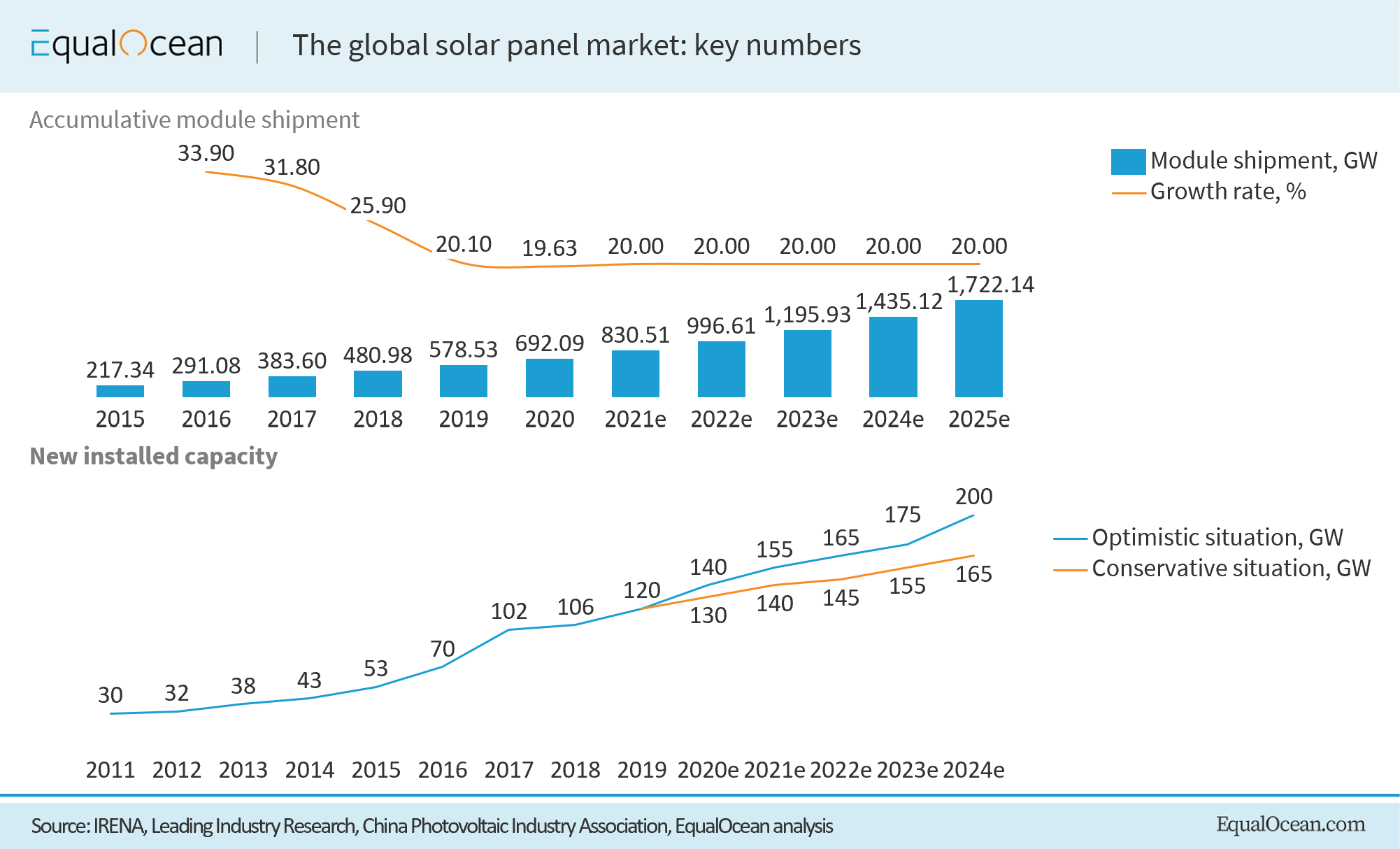 When compared with other players globally, Jinko Solar's shipments were still in the leading position. In 2020, the top ten solar photovoltaic manufacturers' module shipments were about 108.82 GW, accounting for 77.73% of 2020's total demand, and their shipment target is higher for 2021. Although LONGi Solar was ranked the first in 2020 with 20 GW shipment, Jinko Solar followed closely with only 18.75 GW. Moreover, Jinko Solar has occupied first place in the photovoltaic market since 2018, so it is still possible for the firm to catch up with LONGi Solar in the following years. 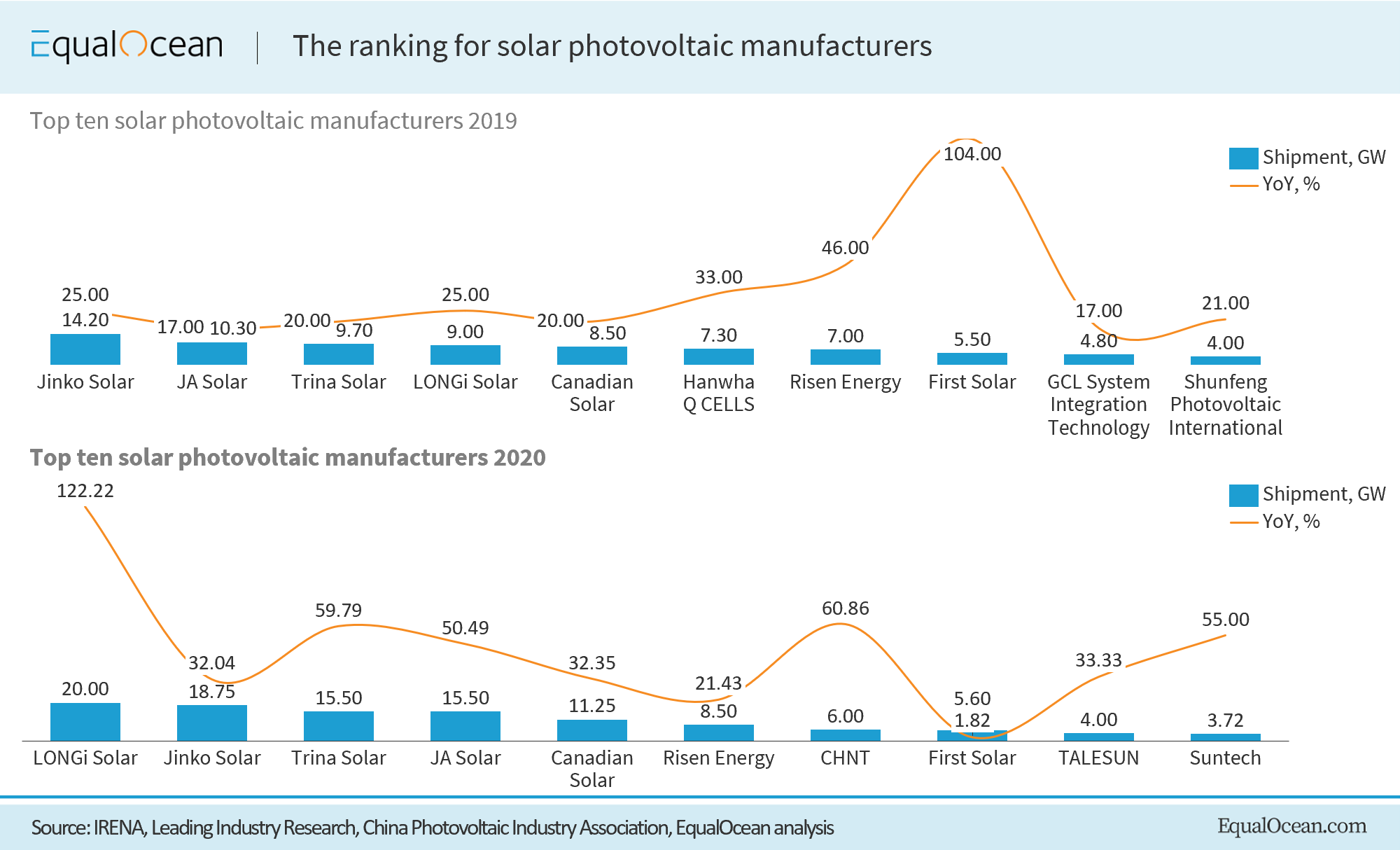 As the major market for photovoltaic power generation,  Asia's module shipments were 330.13 GW, occupying 56.9% of the global market in 2019. Furthermore, Jinko Solar treated China as its most important market in 2021. It aims to split its subsidiaries within three years to go public on the Star Market. Except for China's promising market for photovoltaic power generation, its high investment in the world's energy transition and government support are also vital. According to BloombergNEF, the photovoltaic assets resulted in higher investments in the energy transition in 2020, and China occupied the highest proportion at about 36.29%. This also indicated an ever-growing Chinese market. Looking at China's Thirteenth Five-Year Plan results, the country has gradually become competitive in the photovoltaic industry with its highest additional module shipment and cumulative shipment. Additionally, the Chinese government announced its mid-and long- term objectives – to realize carbon neutrality by 2060. China's module shipments are expected to reach 70 to 90 GW per year in the Fourteenth Five-Year Plan. Jinko Solar's advantages – such as technological superiority, production capability and the special industry mode – also play an essential role in its development. The technological advantages are on show in the efficiency of its components and innovation in new products. The firm has broken the world record 15 times for the efficiency of batteries and components since 2014. For instance, it maintained 24.9% for its battery efficiency and 22% for the components. Its new product – Tiger Pro – was awarded recognition by PV Magazine as chosen 2020 Component, with its 580 W power and 21.6% conversion efficiency. Tiger Pro's order quantities surpassed 10 GW within six months of its release, and the firm expects this new product to achieve 20 GW by 2021.

Most monocrystalline silicon piece firms started expanding their productivity in 2019 As photovoltaic power generation has a lower cost compared with coal power generation, and it will become the primary power source in the future. According to the president of LONGi Solar, 69% of energy will derive from photovoltaic power generation in the future, and today's monocrystalline silicon pieces cannot meet the prospective components' demand. Hence, these photovoltaic firms chose to expand their productions in succession. Among these firms, Jinko Solar's production capability was ranked in the top three in 2020, and it is expected to maintain its leading position in the future. The second risk is the uncertain demand for solar power products. As the demand for solar power is affected by many macroeconomic factors such as the global situation as well as regulations in the field of renewable energy. Under the influence of COVID-19, around 55% of photovoltaic firms in China presented the sign of revenue loss. Although some vaccines became available, uncertain effects remain in the photovoltaic industry. In the US, which is one of Jinko Solar's largest markets, the past president Donald Trump favored traditional energy industries and hit the solar industry hard by imposing higher tariffs on photovoltaic panels. But the good news is that the new president Joe Biden aims to boost renewable energy, which might lower risks for the solar industry.

In the time where more people and organizations advocate for sustainable development, the photovoltaic industry is becoming utterly promising. With the Chinese government's strong support, Jinko Solar is gradually transferring its emphasis to the domestic market, while also boosting its revenue. Nevertheless, the solar market is still facing significant risks. The unstable geopolitical situation and COVID-19 pandemic will remain as threats to the new energy firms' development. Jinko Solar should find more ways to alleviate its shortcomings and keep innovating in such a harsh business environment.