Altering its business strategy, the solar panel maker turned profitable yet again in the second quarter of 2020. 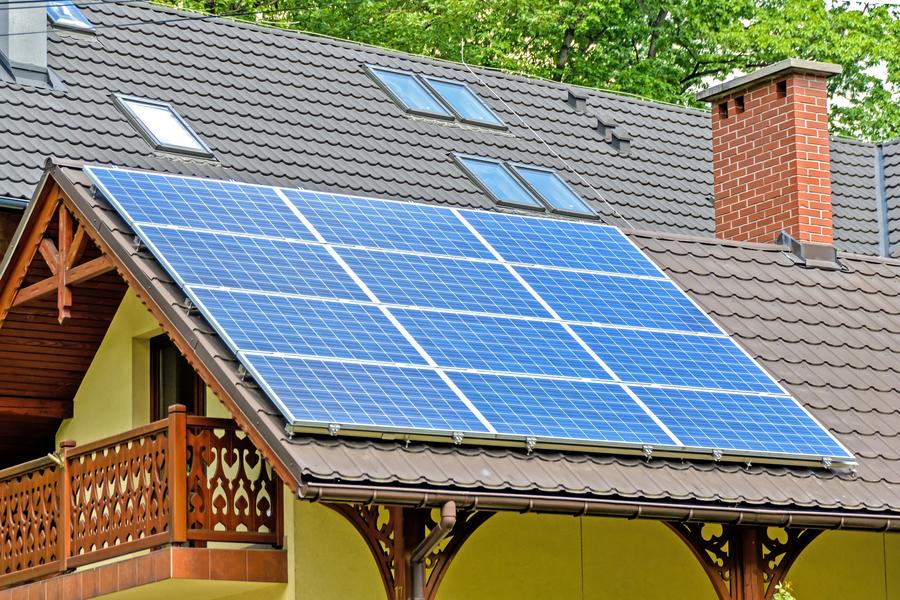 ● ReneSola's profitability has significantly increased, with a cutoff in its manufacturing business since 2017; there was a slow recovery trend amidst the pandemic in the second quarter of 2020.

● Benefiting from three key improvements, ReneSola has attracted more investments and continued to expand into the global market.

ReneSola (SOL:NYSE) has signed a Memorandum of Understanding with Eiffel Investment Group – an asset management firm that managed EUR 3 billion, as of January 6, 2021. This agreement might have accelerated ReneSola's projects in Europe. The two have also agreed to launch a 1 GW joint venture, in which the solar project developer will hold 51% shares.

Founded in 2005, ReneSola is a company specializing in producing monocrystalline and polycrystalline silicon pieces. In 2008, the firm went public on the New York Stock Exchange (NYSE)

ReneSola's profitability has fluctuated during the recent years. It was majorly affected by global policies, business strategies of major players in the field and, of course, the COVID-19 pandemic. The company showed negative net profit – with a lack of government support partly to blame – back in 2016. For instance, the National Development and Reform Commission (NDRC) reduced feed-in tariffs (FITs) for utility-scale solar plants, which lowered the selling prices in the solar industry. Moreover, the US former president Donald Trump also paid less attention to renewable energy development, further escalating pressure on its financial condition.

The turning point came after 2017. That was when the firm quit the manufacturing businesses as it came with overcapacity and lower profits. This cutoff vastly improved ReneSola's net profits. By giving up the market pie in the manufacturing sector, the solar project developer has shown a rising annual gross profit since 2017.

However, the adverse impacts of COVID-19 dragged down the company's profitability in the first quarter of 2020. There was a decrease of 348.44% in gross margin compared with the previous quarter. The subsequent increase was due to module sales in Minnesota and small-scale projects in Hungary. 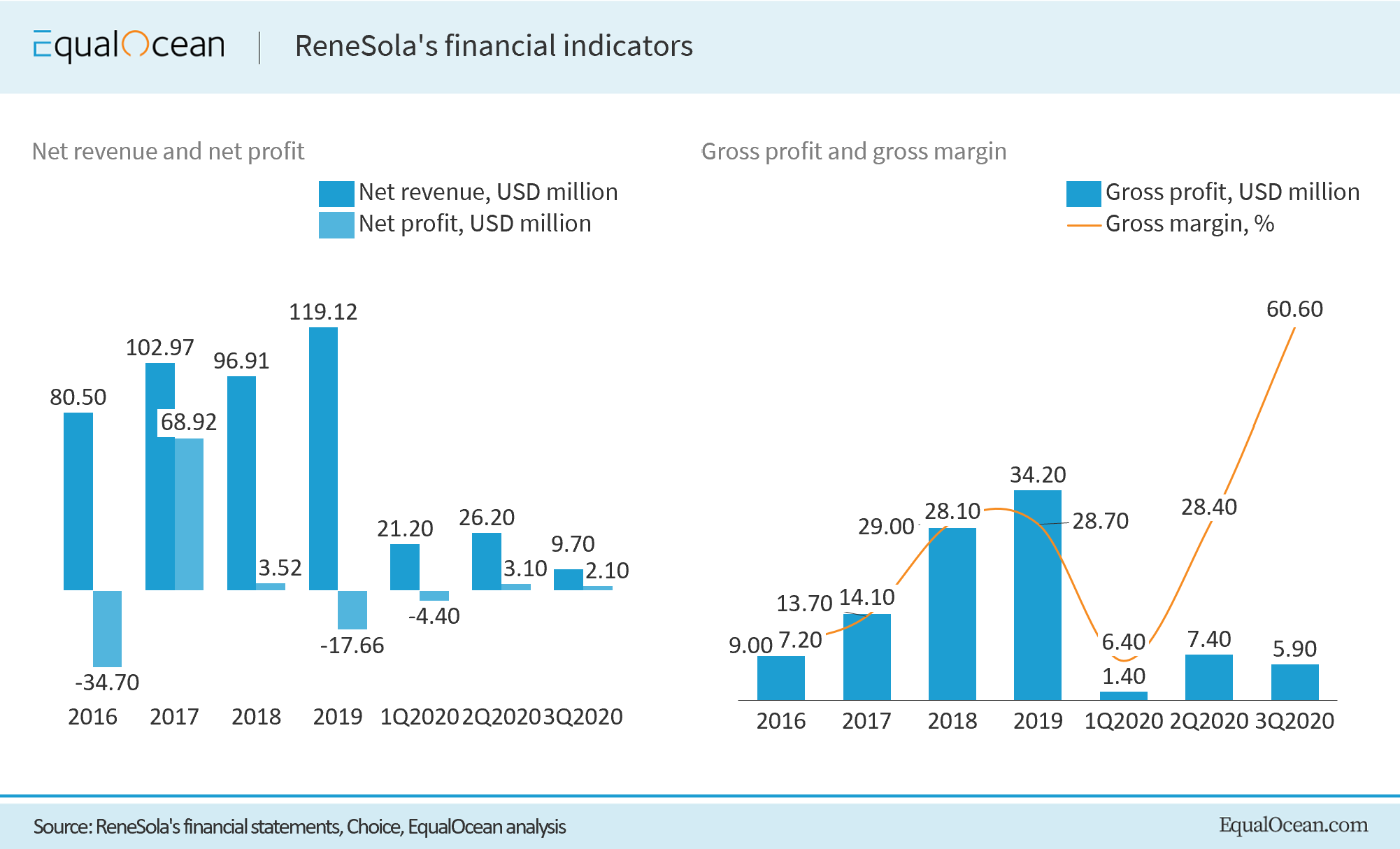 Founded in 2005, ReneSola did not make considerable profits in its first ten years. More recently, it even had negative earnings in four consecutive years, from 2012 to 2016.

What are measures for this company to overturn its unfavorable position in the solar industry? The first change is the firm's nature. In 2006, ReneSola Singapore's participation brought more capital and turned the firm into a wholly foreign-owned enterprise, expanding more opportunities in global trades. Furthermore, ReneSola Singapore has added another USD 490 million to the solar project developer, with a total of 180 million shares of the firm by the first quarter of 2020.

Secondly, ReneSola altered its main businesses. Since the firm did not generate positive profits in the first few years, it has kept finding new ways to earn profits. The first way is to produce silicon pieces and battery pieces in products such as inverters, mortars, and illuminators. After it exited the manufacturing business, the company's gross profits started rising and eventually it transformed into a project developer in 2019. It is noticeable that the DG project in China, a distributed generation solar power project built on rooftops, generates a steady flow of revenue for ReneSola. Although rooftop projects brought more leasing payables, the leasing fee will be offset by its increasing number of projects in the long-term. 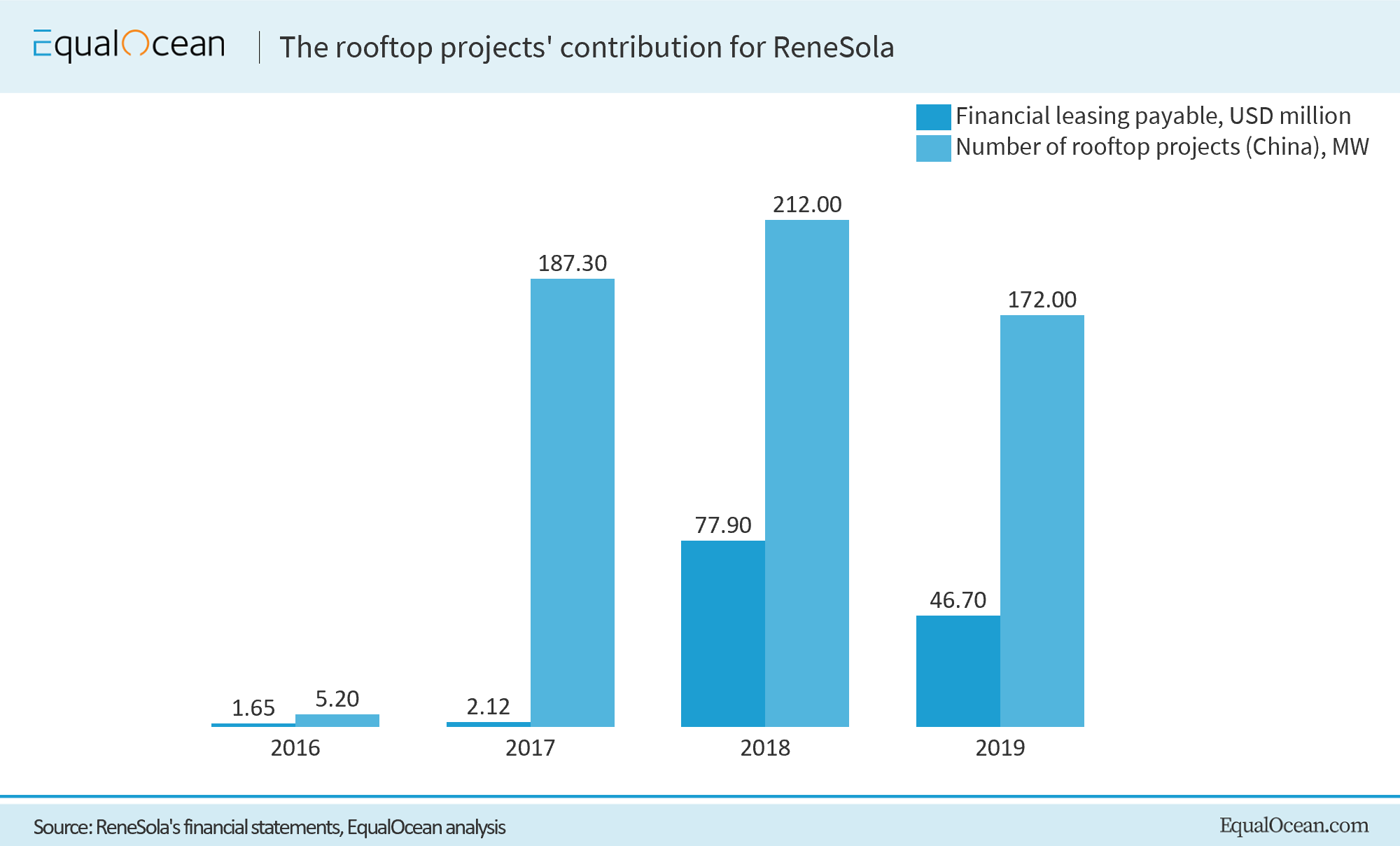 Last but not least, ReneSola renewed its top management. By the end of 2019, the firm transferred its headquarters from Shanghai to Connecticut, as ReneSola was optimistic about the American market. With its new headquarters, Yumin Liu and Ke Chen joined the company as the new CEP and CFO. Before joining ReneSola, Yumin had worked in Enron, United Technologies and Heidrick & Struggles, Additionally, Yumin aimed to improve ReneSola's global competitiveness; in his first financial statement, he even compared the firm with four American photovoltaic firms – Vivant, Sunrun, Sonova and SunPower.

These changes not only increased the company's operating income, but also demonstrated advantages in the following three aspects – the first thing is the overflowing investments since ReneSola participated in the Singapore solar project. As a whole, after five rounds of fundraising so far the firm has raised a total of USD 264.16 million. The highest fundraising amount was USD 154.56 million in January 2017 by China Resources Leasing, with more upcoming investment opportunities in the future. 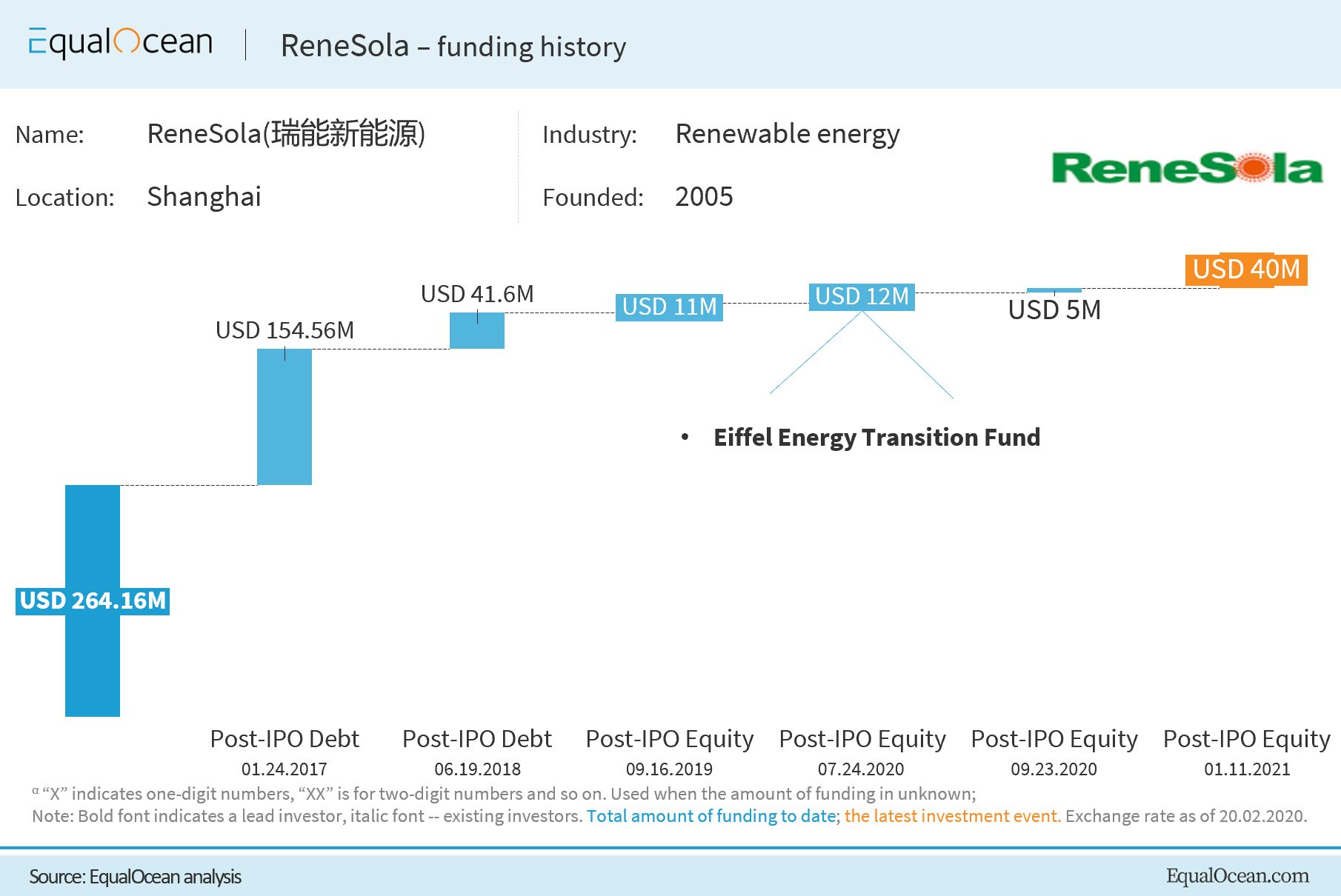 The second is regarding ReneSola's top position in the Indian market. According to JMK's 2020 annual solar report, ReneSola has generated more than 2.5 GW of renewable power in India. In terms of the module shipments, the solar project developer has ranked seventh among other global players, occupying 4.8% in the overall market. 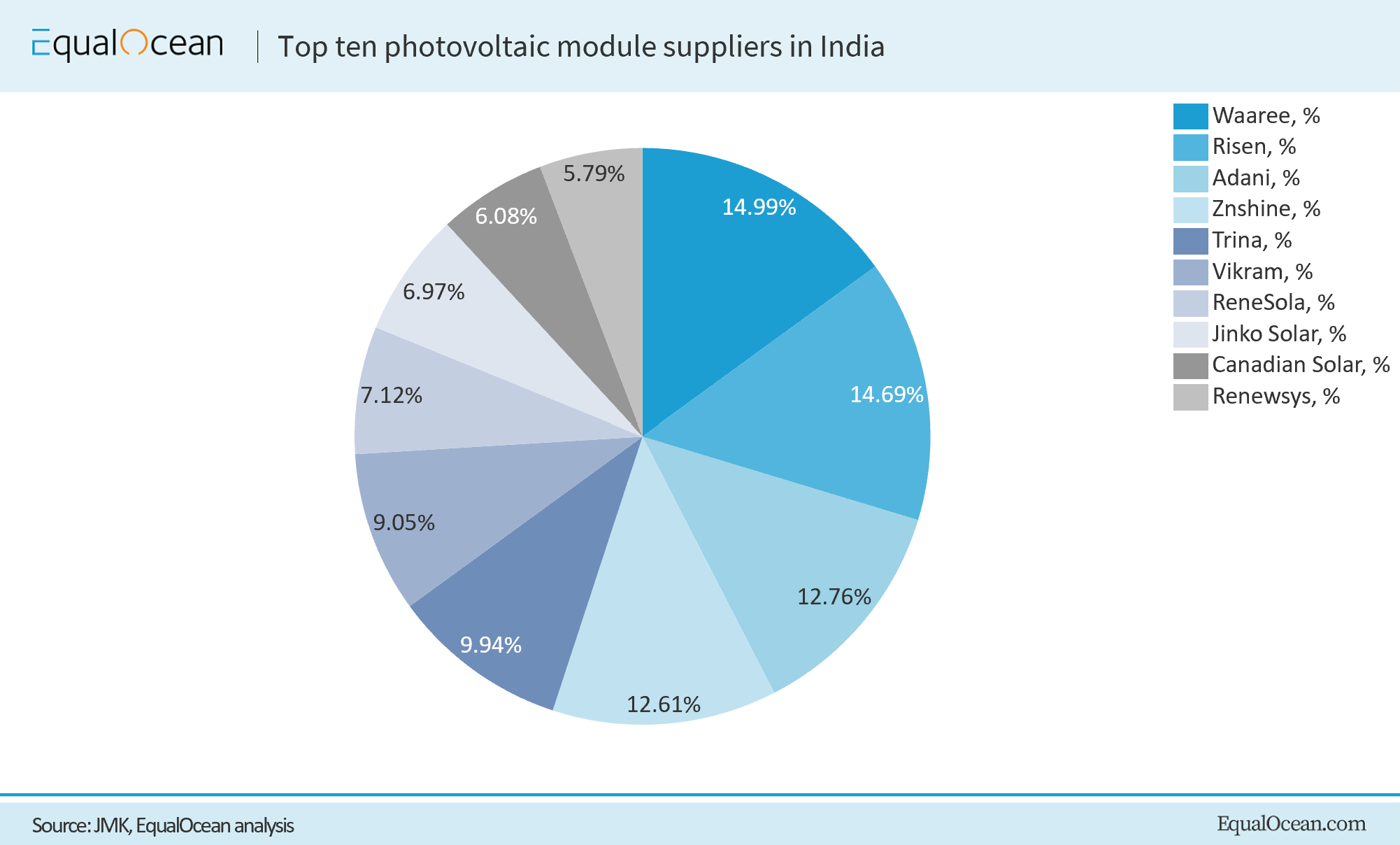 Except for market expansion in India, ReneSola is also amplifying its influence in other markets, especially in the US and Europe. By the end of 2020's third quarter, there were 300 MW late-stage project pipelines in the US and 282 MW late-stage project pipelines in Europe. To be more precise, the firm's objective obtained 1 GW projects in the US and Europe. In addition, ReneSola has worked with a French electricity giant, Tenergie, to explore the solar projects in June 2020 and sold Hungary's 20 solar power plants to Obton, a solar investment firm.

Although ReneSola's changes have improved its profitability and strengthened its global reputation, there are four risk factors to be aware of. To begin with, ReneSola has been indicted several times.  In 2019, the firm was sued by many financial corporations and tech firms. For instance, it did not fulfill a debt of about CNY 0.69 billion from the Industrial and Commercial Bank of China (ICBC) in September 2019. ReneSola also still owed Autowell, an automation equipment manufacturer, CNY 3 million in August 2019. ReneSola did not pay back its debt at all, thus harming its reputation dramatically and likely making it harder to generate capital further down the road.

Secondly, due to the adverse impacts from the COVID-19 pandemic, ReneSolar lowered its revenue target in the first quarter of 2020. As financial institutes' shutdowns delayed its 15 MW solar sales from Hungary, some profits were added to the second quarter of 2020. Also, some solar projects under construction experienced interruptions during this period, such as the release of COVID-19 vaccines and uncertain effects from vaccinations. The pandemic environment therefore struck down this solar project developer while its profitability was still on an upswing.

Thirdly, regarding the geographical issues and unpredictable weather conditions, saturated markets and unsecured use rights all play essential roles in solar power projects. Specifically, it is not easy for a solar project developer to find a suitable place with enough sunlight and endure fewer natural hazards such as earthquakes and floods. Moreover, with the evolving solar power project market, ideal project sites will become fewer and fewer, making it harder to confirm projects. Even if a firm signs agreements or contracts for its use rights, third parties may still challenge its operations. 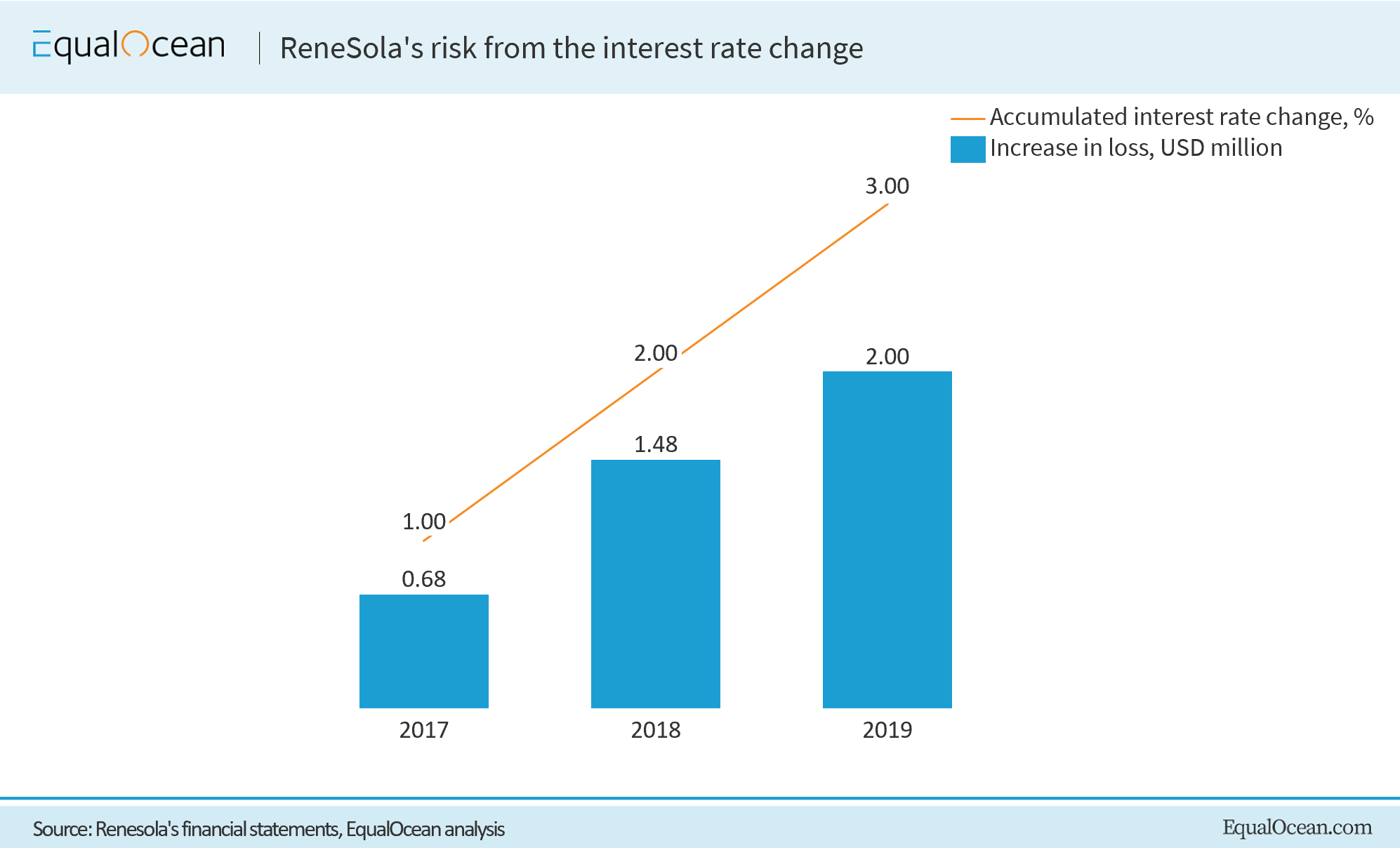 Lastly, the company also faces interest rate risks. The change of interest rate will affect both the firm's interest expense and interest income in the future. As ReneSola did not engage in any hedging activities over interest rates so far, a 1% interest rate change will also result in comparatively large losses.

After a few years of efforts to make changes, ReneSola has gradually built up its global reputation and reached profitability, shifting its focus to project development. However, the  COVID-19 catastrophe partly interrupted its expansion. Several projects were delayed, resulting in a risk that the company will not be able to repay its debts on time. If the company finds a way to expand its global customer base and diversify its risks, the possibility of having a stable cash flow will be higher.