The trio's businesses are recovering as the massive vaccine rollout is boosting the industry. 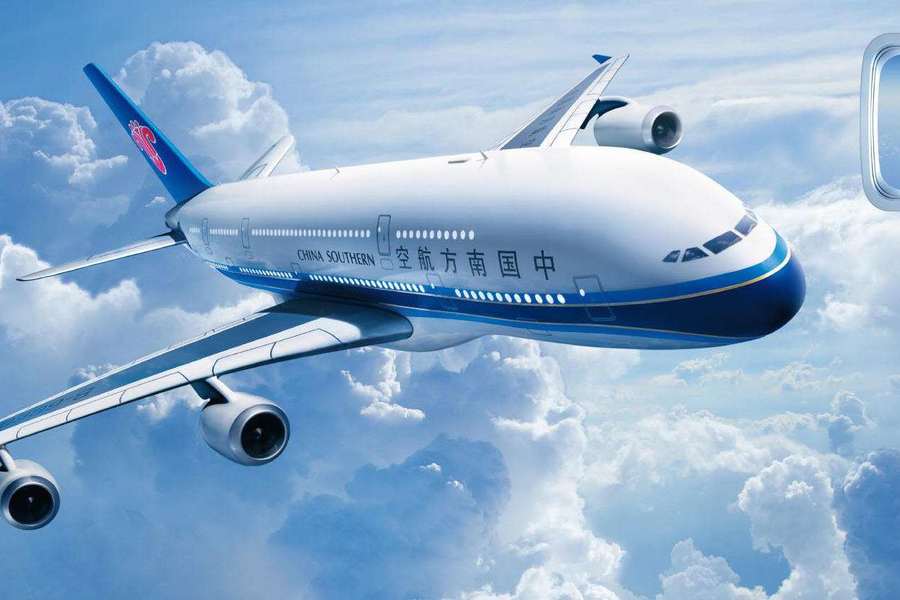 But compared with other countries and regions globally, China's aviation industry seems to be recovering somewhat faster. So far, more than 40 airlines worldwide have gone bankrupt or been restructured since the epidemic started in early 2020. According to the International Air Transport Association (IATA), from the perspective of market segments, the global average revenue passenger kilometers (RPK) of the main geographic areas all dropped more than 60%. The passenger load factor (PLF) in Africa, North America and the Middle East was less than 60% while the passenger-carrying rate in the Asia Pacific and Europe was about 65%.

China's trio of airlines had superior critical ratios, compared to the global averages in 2020. 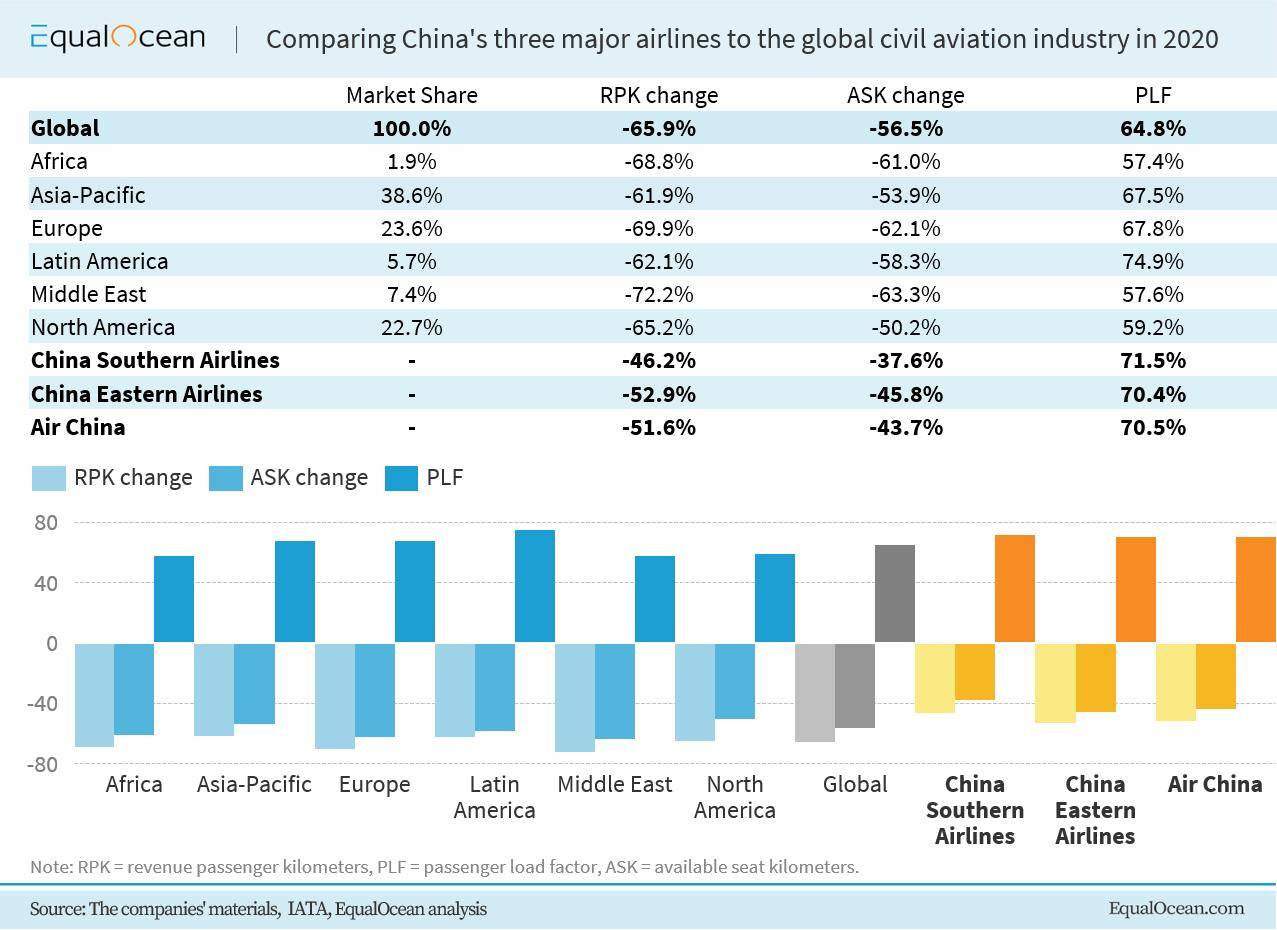 Last year, China accounted for 19.9% of the global domestic passenger transport market, ranking first, followed by the United States (16.6%). The two countries' leading positions result from the enormous demand for domestic transportation. China's effective COVID-19 control has played a great role in the recovery. From this point of view, China's airlines seem to have an increasing investment value. This article will discuss the present and future outlook of China's three major airlines. 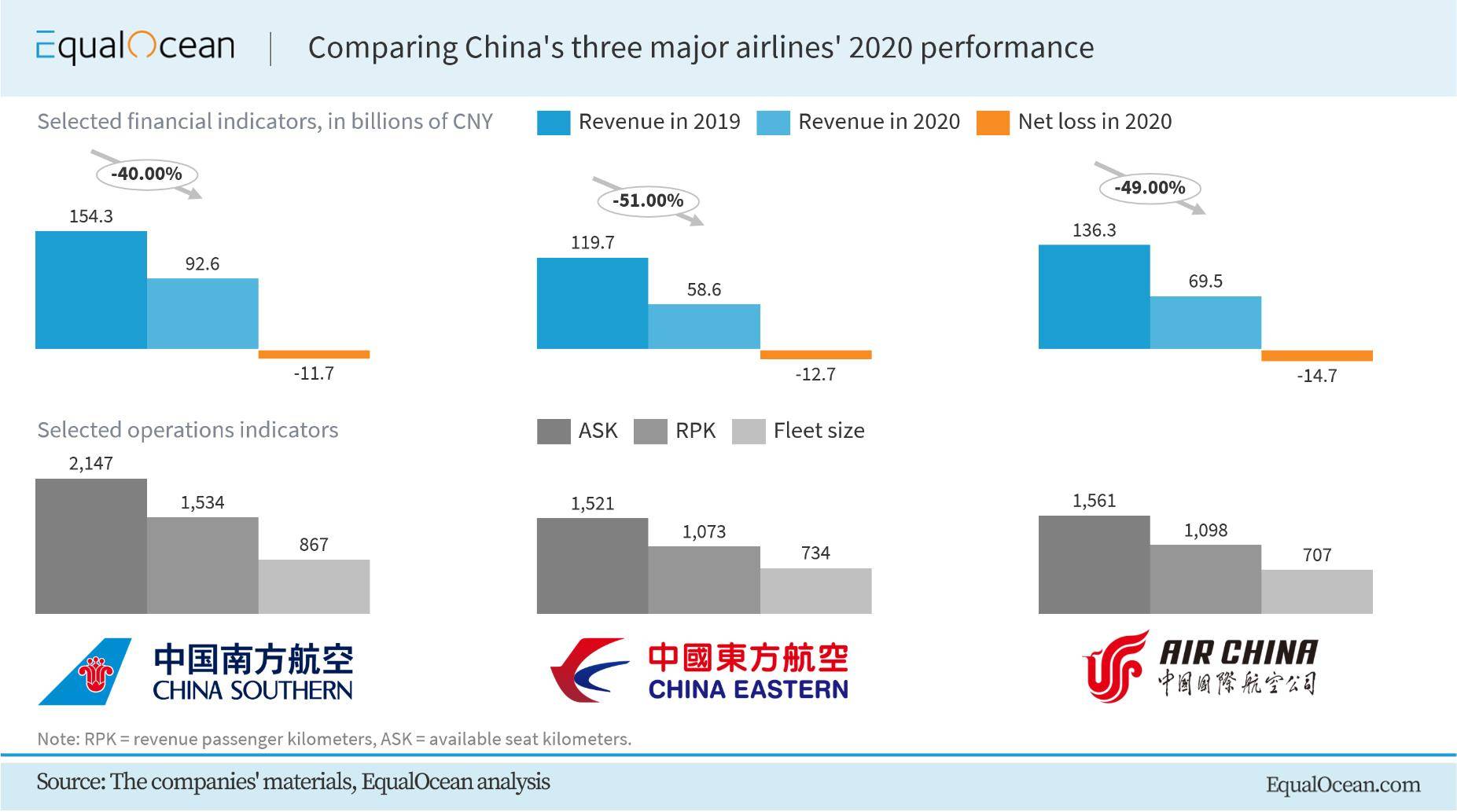 China Southern Airlines' approach to the new macro challenges made it the most financially successful among the trio. In March 2020, in relation to the limited international passenger flights, this airline seized the market opportunity and created the layout of 'passenger-to-cargo' flights. On April 3, the company launched a passenger aircraft cargo special flight business, implementing the first 'no seat flight' with cabin modification. The company then transported 17.6 tons of cargo from Guangzhou to Kuala Lumpur, Malaysia. Except for business modifications, on July 28, China Southern Airlines launched the 'Fly at Will' domestic tourism package. From August 12, 2020, passengers can get economy class tickets through its app for any time or flight, on both weekends and weekdays. Compared with China Eastern Airlines' similar plan, its products are more diverse and have thus become increasingly popular. Moreover, China Southern Airlines opened the flight simulator experience in the live broadcasting room to attract customers and optimize its marketing strategy.

On the other hand, China Eastern is the first company to adopt unconventional remedial measures. On June 18, it launched the innovative 'Fly at Will' Ticket Package in China. Consumers only need to spend CNY 3,322 to travel economy class with very few restrictions on weekends. The plan seemed to become popular, as more than 65,000 tickets were purchased during the first weekend. As a result, the company attained CNY 300 million in cash flow. Also, in August 2020, China Eastern Airlines and China Railway Group realized full system docking, which means through the app of either party, passengers can buy one-stop combined transport tickets for China Eastern Airlines and high-speed rail trains. This effectively stimulated customers' travel interests. Despite innovations, China Eastern Airlines also actively adjusted aircraft and engine introduction progress and postponed investment plans to reduce expenses. However, China Eastern Airlines' 2020 recovery was relatively weak. Based on the analysis of measures taken by China Eastern Airlines, we believe that the company's efforts focus on medium and long-term periods. We expect that the effect of these measures will be reflected in its business performance in 2021.

Likewise, Air China was the latest of the three major airlines to take necessary measures. In October, Air China launched three plans to stimulate its business. The main product is the youth rights card, which can be understood as Air China's version of the 'Fly at Will' plan. However, it has age restrictions, only supporting people under 25. The second is the 'Double CityPass' product launched for customers who often travel between the two cities. With such a plan, customers can travel between selected cities for unlimited times with a fixed fee. The third is called 'Curiosity Calendar,' which provides passengers with the opportunity to get the ticket booking link lower than Air China's market price. Perhaps due to the late-launch recovery plans, Air China's performance in 2020 was not ideal and it needs to put more effort into product design in 2021.

For the 2021 plan, China Southern Airlines still emphasizes reducing costs and increasing efficiency. The company plans to reduce the unit operation and service costs by strictly controlling expenses from necessities, including aviation fuel and maintenance fees. The company also plans to develop an aviation-food-related improvement business and expand duty-free goods' sales channels essential to reduce costs. Also, we believe that duty-free goods sales and aviation food may become the key to its recovery.

China Eastern focuses on flexible adjustment of capacity and speed up product innovation. The company plans to strengthen the hub strategy and realize the four airport groups' linkage in Beijing Tianjin Hebei, Yangtze River Delta, Guangdong, Hong Kong, Macao, Chongqing, and Chengdu. It also wants to expand group customers, speed up product innovation, and accelerate the launch of customized and universal products. We believe that these measures are more in line with China Eastern Airlines' innovation strategy in 2020, and therefore we hold a solid optimistic attitude.

Compared with China Southern Airlines and China Eastern Airlines, Air China's plan is not detailed, which provokes concerns about its recovery and development. According to Air China, the focus of its work in 2021 will be improving efficiency and the quality of products and services. Another measure is to develop a market-oriented strategy and promote the integration of core flight resources. For Air China, the development of regional aviation may be a breakthrough method. Regional airlines have the advantages of having a low up-front cost and high flexibility, which will greatly benefit the economic development and tourism industry. 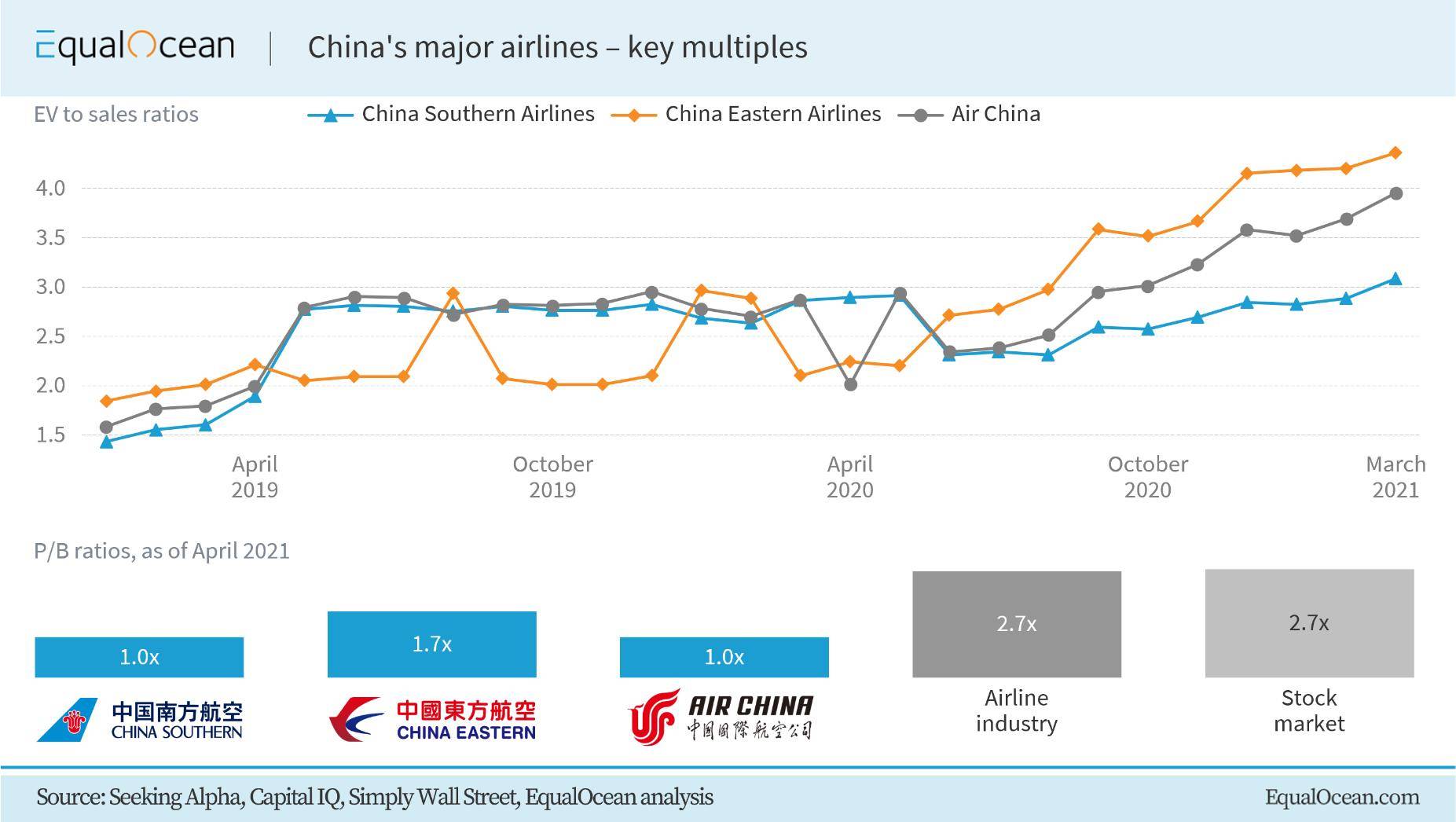 The three airlines' P/B ratios are all lower than the industry and stock market average levels. However, their EV/sales ratios have all reached historical highs. Based on these data, though the companies are taking measures to recover, it isn't a good time to long their stocks, especially for short- and mid-term investors. Nevertheless, we can credit these companies' efforts towards recovery, which might affect their ratings in late 2021.