The concept of smart wearables was pushed out into the mainstream by the time Google released Google Glass in 2012 – while this product faded, it did not take much longer for other technological giants such as Apple to get fully involved in this new market. Subsequently, some start-ups also seized an opportunity to upscale their businesses in this field. 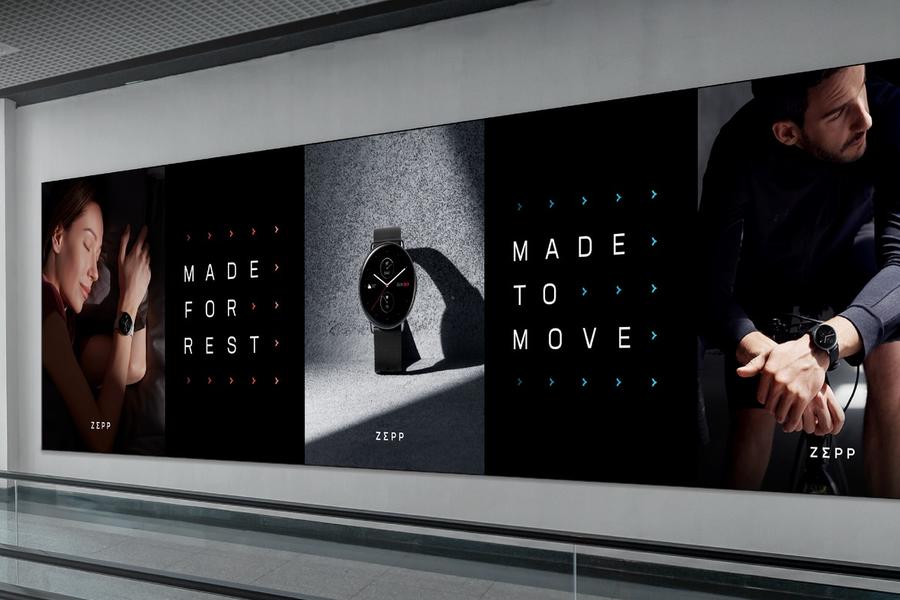 ● Zepp Health's revenues increased rapidly over the last four years, but most of its income is generated from Xiaomi-branded products.

● The company continues to excel in wearable devices and healthcare, showing a strong growth momentum. To improve its competitiveness, the firm is trying to be less dependent on Xiaomi by expanding globally and highlighting brand differentiation.

First named Huami, the wearable device producer was founded in 2013 with its main businesses focusing on smartwatches and smart wristbands. According to its president – Meihui Fan – the firm aims to use chip and cloud technologies to help people improve their health conditions. In February 2018, it became the first intelligent hardware firm to list shares on the New York Stock Exchange (NYSE).

Initially, the firm was known for producing the Mi Band – a smart band released by Xiaomi in 2014. Intelligent wearables represent one sector of Xiaomi's diverse industry layout.

Learn more about the Xiaomi ecosystem from our latest research report.

Overconcentration: Xiaomi drives the most revenue

Since Zepp Health introduced its first Amazfit running watch in 2016, its revenues have shown an upward trend. The highest growth rate happened in 2018 when the firm released its Amazfit smartwatch - Bip Fitness.

However, Xiaomi-branded wearable products have been the firm's primary revenue contributor, as revenues from Mi Band were twice as high as from Amazfit. 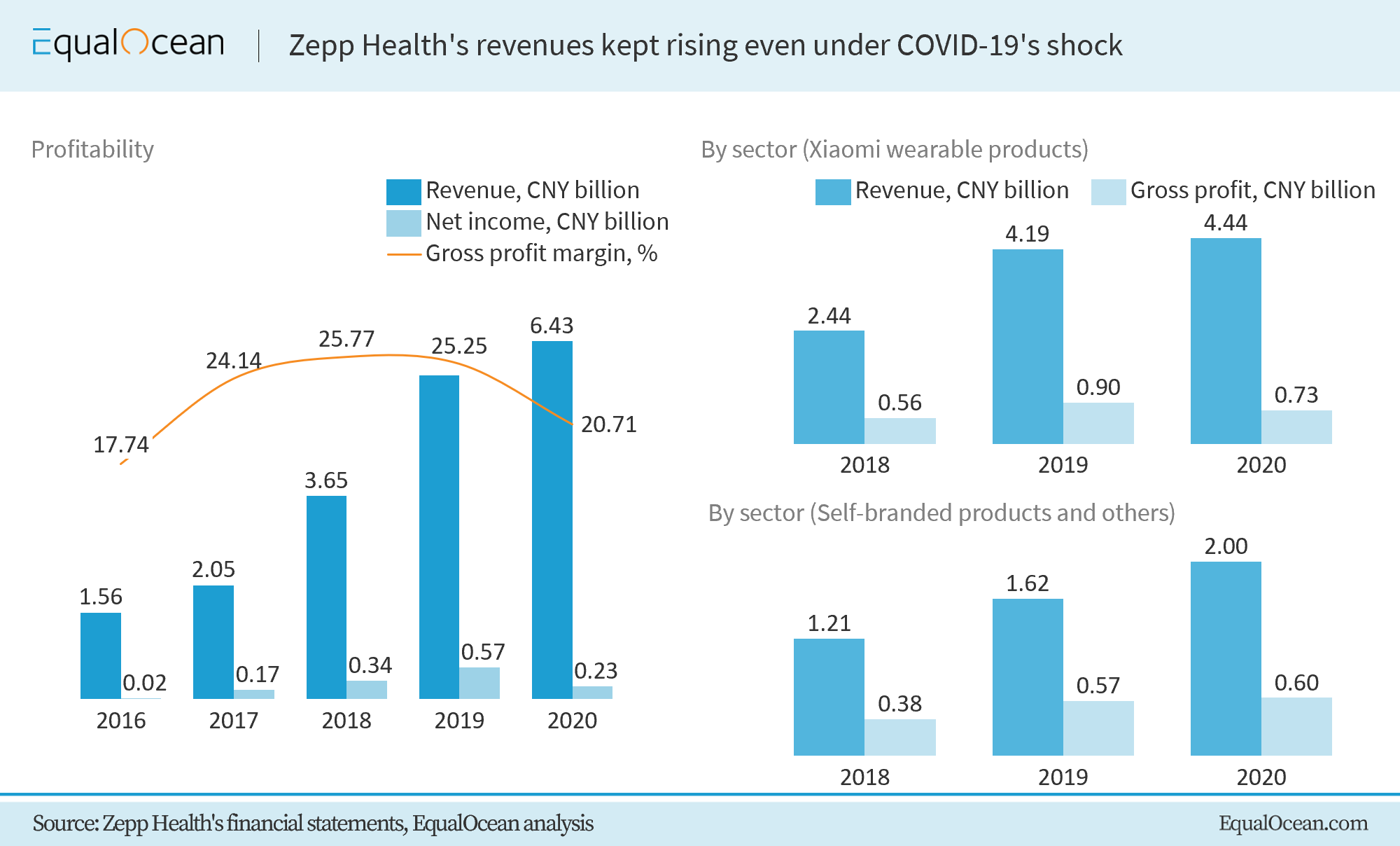 What Zepp is aiming for: industry foresight

Furthermore, the wearable device market is expected to reach a scale of 722.89 million units by 2025. In this fast-developing track, the firm puts more effort into smart bands and watches while increasing its product differentiation. Precisely,  the shipments of smart bands and watches increased by 48% and 48.6% respectively in the third quarter of 2019. As for the healthcare market, China is full of business opportunities. The National Health Commission of the People's Public of China enacted the China Health Initiative in July 2019 to popularize a healthy lifestyle in China. The domestic market size is likely to reach USD 66.95 billion by 2025. Also, a growing number of firms globally have taken health-related businesses as a part of their primary strategies. Two prominent examples here are Apple and Google. 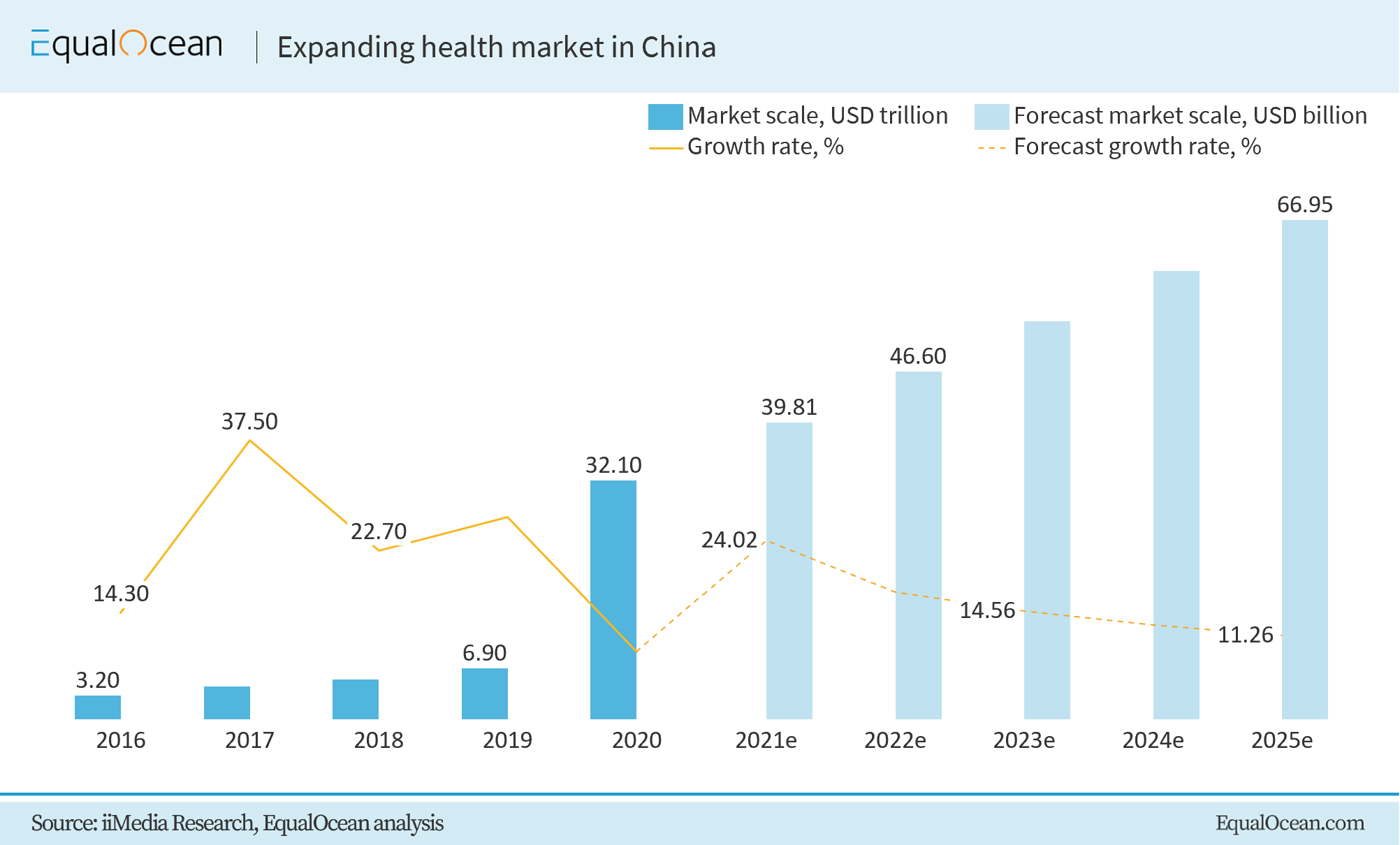 After deciding on its main business, Huami started finding ways to improve its competitiveness among numerous companies in the same sector. The company first tried to minimize its dependency on Xiaomi.

At its early stage, Huami joined Xiaomi's industry chain to attract capital, while also leveraging sales channels of the consumer electronics giant. As it gradually established its foundation, the wearable device producer began developing its own brand, Amazfit, to produce smartwatches and smart wristbands, the first series of which was launched in 2015. After the firm acquired an intelligent hardware firm named Zepp in 2018, the company continued promoting its private brand. In time, the company's shipments of the self-branded product rose drastically. From 2015 to 2020, the number jumped from 28,000 to 4.7 million units, with an average annual growth of 269.84%.

Zepp's efforts in building commercial independence could also be reflected in its rising R&D expenses. From 2015 to 2020, its R&D expenses rose 58.18% to CNY 538.01 million. The company also released a smart wearable-specific chip – Huangshan MHS001 in 2018 – that was applied in Amazfit's smartwatches.

Surprisingly, Amazfit-branded products' gross profit margin has been surpassing Xiaomi's all the way since 2016. 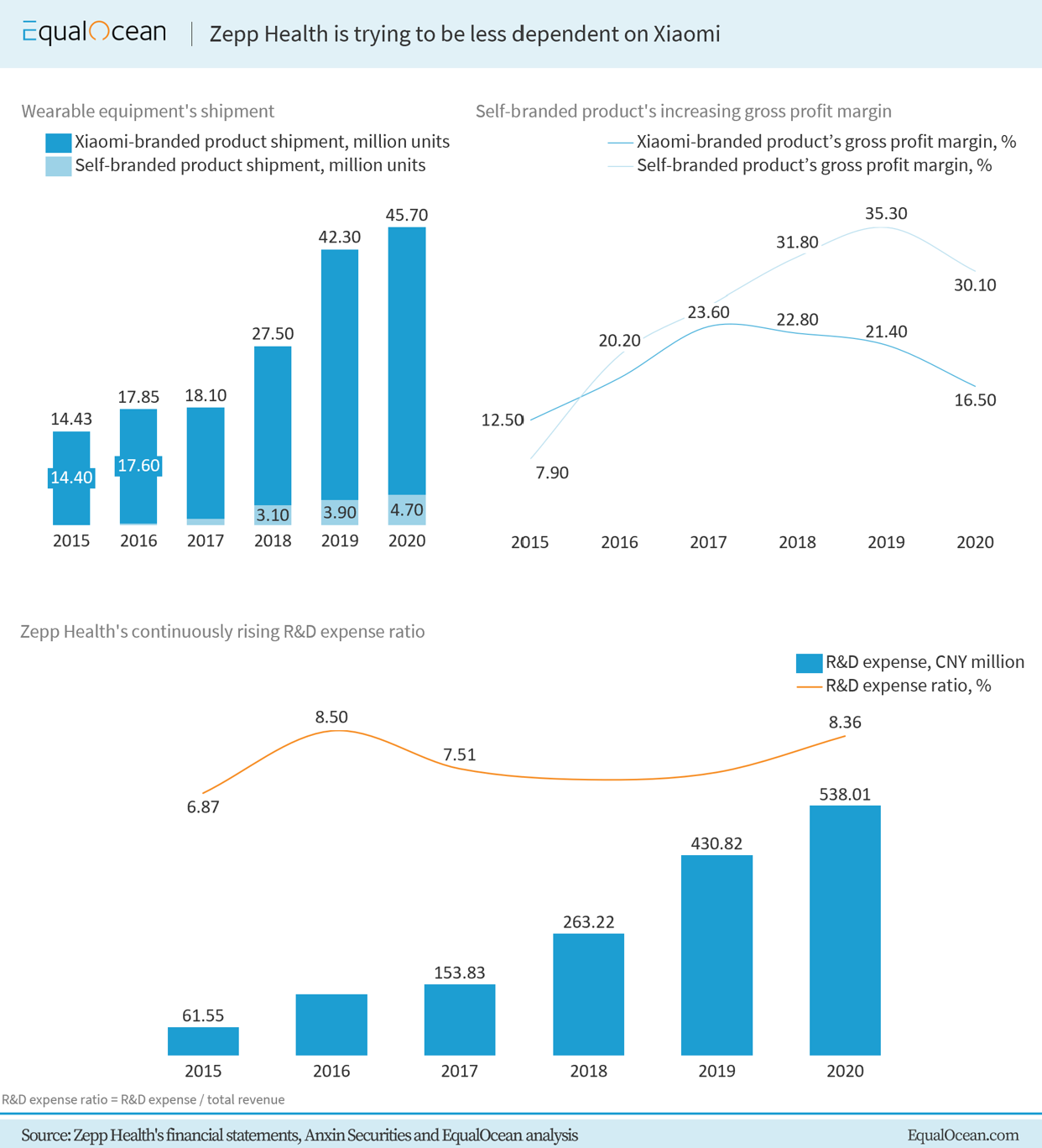 The second approach for Zepp Health to lift its business is through exploring international market opportunities. To expand its sales regions, Zepp Health incorporated Amazon Cloud into its health service cloud platform. Amazon Cloud's 117 cloud services all provide data encryption to secure users' information. As a result of Zepp Health's efforts in global expansion, its overseas shipments exceeded 54% of the total in 2020.

Last but not least, Zepp Health is constantly strengthening its brand diversification. To compete with other players within the smart wearables area, Zepp Health's products cover different themes, such as fashion, exercise, and health markets. In addition, its prices also match diverse people's needs. Except for the intelligent watches and wristbands, it has also released a smart sports set of earphones, a smart treadmill and home gym.

Although the wearable device producer has made significant progress during these years, it still faces several apparent risks. To begin with, some significant shareholders trimmed their stakes in the company. In 2020, the firm's CEO Wang Wang reduced 420 million stocks, with a decrease rate of 2.3% compared with last year. Moreover, Wells Fargo & Company sold 9.7% of its shares in Zepp Health by the first quarter of 2021. This action might imply shareholders have lost confidence in the firm.

Secondly, Zepp Health still relies heavily on Xiaomi to generate its revenues, resulting in unstable financial conditions - Xiaomi's performance will correspondingly affect the company. Even though the proportions of the self-branded product have kept rising in recent years, Xiaomi wearable products still occupy over half of available revenue. 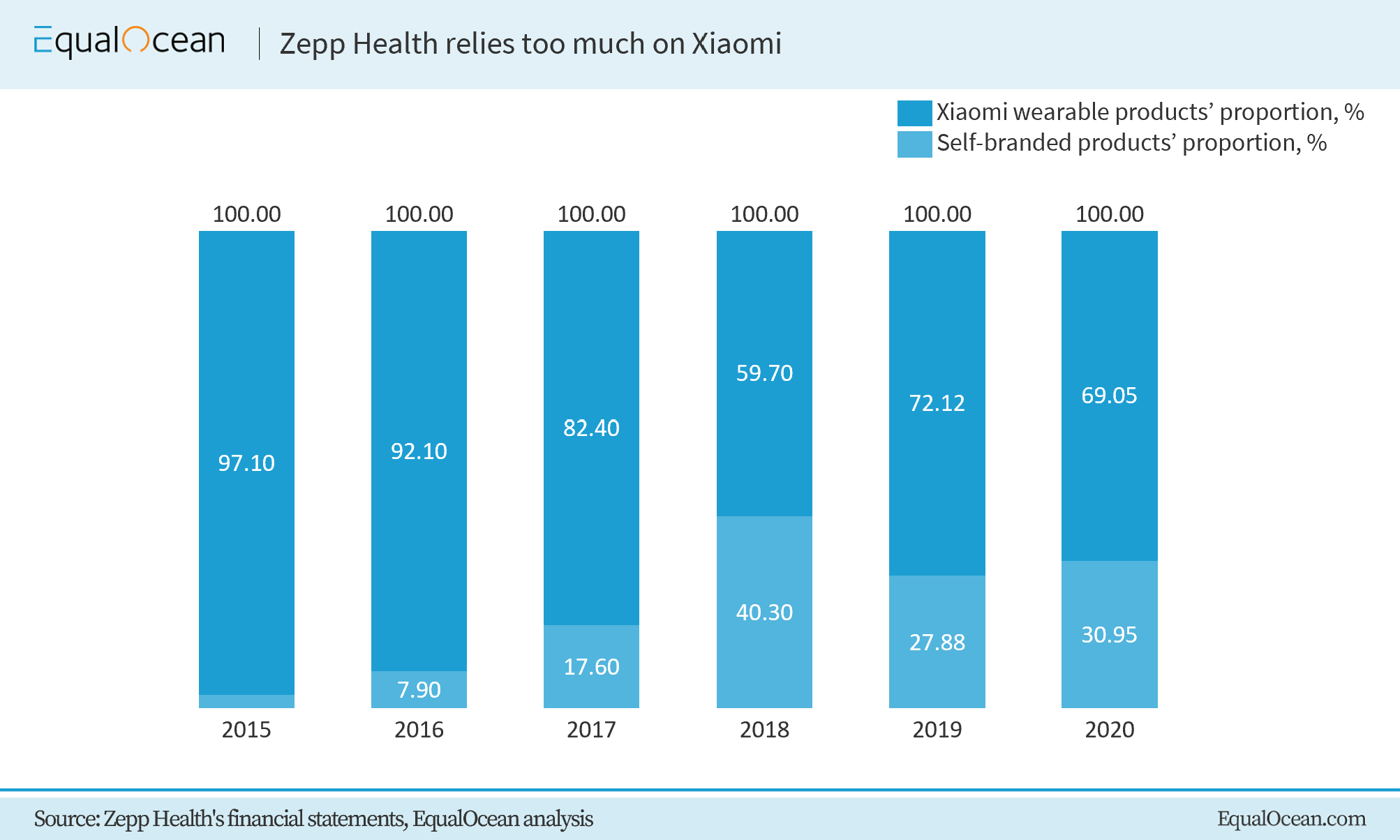 Thirdly, the firm has a relatively small market share worldwide. As for the wearable device manufacturers, Apple, Xiaomi and Samsung were three leading players from 2017 to 2020. Zepp Health merely accounted for a tiny place in the market. In terms of the smartwatch sector, Apple remained the king in 2020, taking the largest market share, while Zepp Health Amazfit had only 5% in the third quarter of 2020. 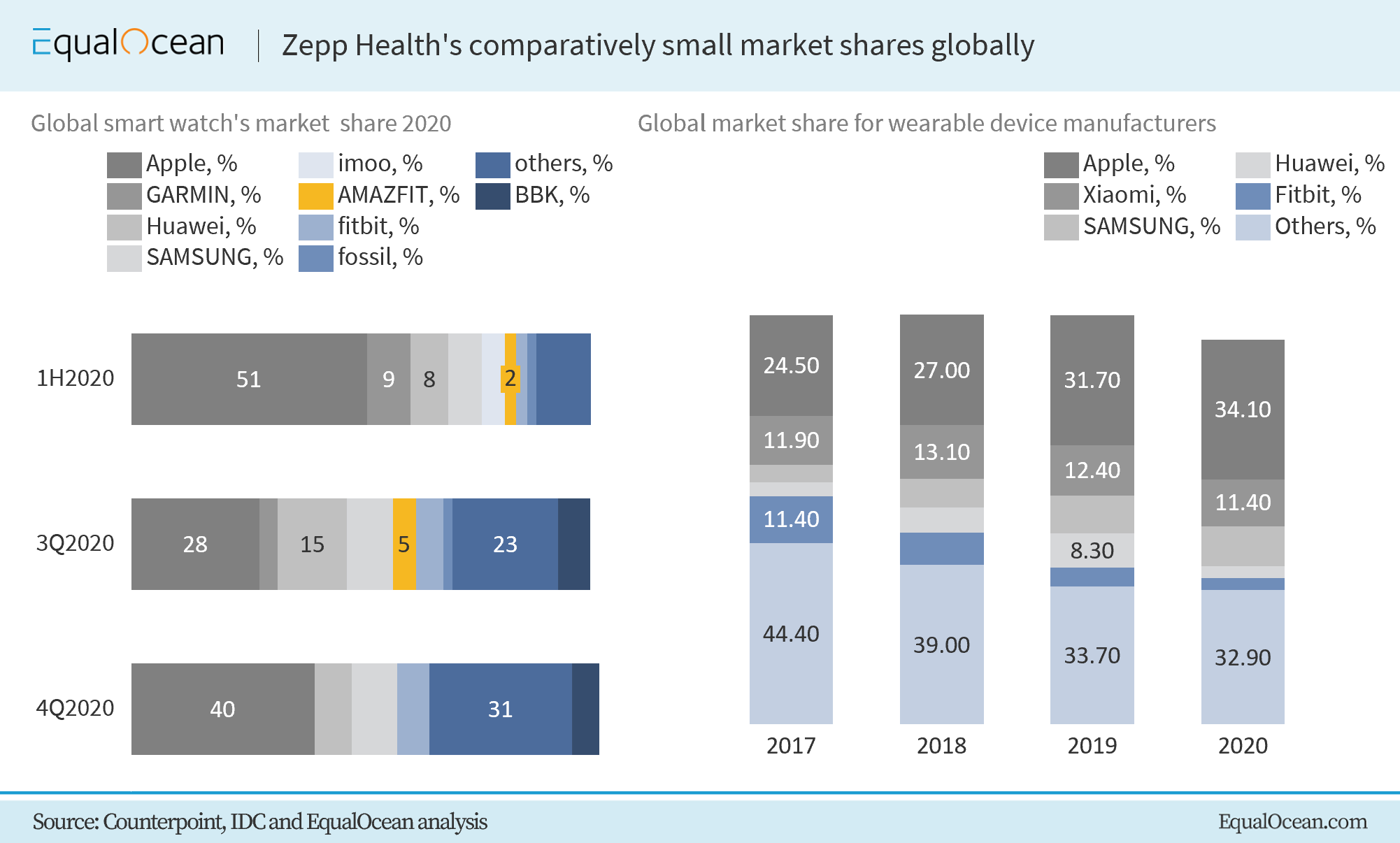 Zepp Health's product differentiation and internationalization strategies are poised to gradually build up its business independence. In the short term, however, it will remain a Xiaomi affiliate, facing both the advantages and the drawbacks of this status. We stay bullish on Zepp.