Backed by a new round of capital, Duckbill aims high to be a dominant player in the domestic container trucking market 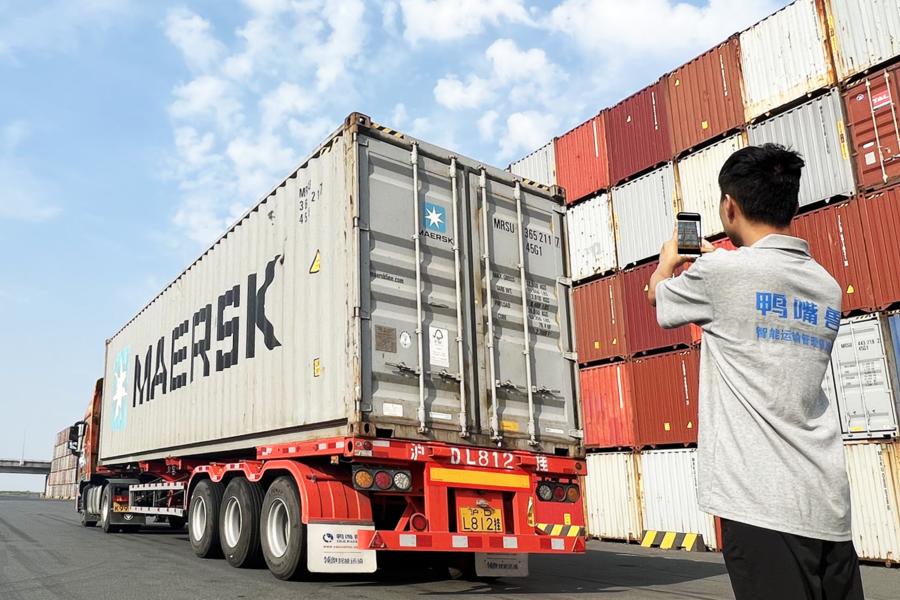 This round was led by the SAIC-CICC private equity fund. Existing shareholders including Shunwei Capital, Future Capital and Furong Capital continued to pump money into this deal.

The startup will use the fresh funds to support the ongoing research and development of digitalization in container land transportation, business expansion to more ports across China, and optimization of service, the statement reported.

A latecomer, but a quick grower

Founded in 2017 and headquartered in large-port megacity Shanghai, Duckbill is an innovator in the container trucking industry, with branches and services in all the main ports in China, including Shanghai, Ningbo, Shenzhen, Qingdao, Guangzhou and Tianjin — they are also parts of the world's top 10 busiest ports in terms of container throughputs in 2021.

Although it is only a five-year-old startup, Duckbill has previously closed six rounds of funding since its inception, snagging a total of approximately USD 200 million from a bunch of notable venture capital firms. They include Singapore’s state-owned investor Temasek and growth-stage venture investor Pavilion Capital Partners. Within this frame of reference, Duckbill is the most promising drayage servicer in China.

The company has long specialized in the international freight container business — a more complex but lucrative niche market — and redefined it via its state-of-the-art algorithm-empowered software and management system. Meanwhile, with a team of experienced IT professionals from the shipping logistics industry featuring deep insights and superb execution skills, giving this trucking service platform featuring intelligent dispatching and transportation management an unparalleled advantage in upgrading the whole chain of container transportation through digital systems.

There is no doubt that Duckbill, a latecomer to the industry, has made tremendous strides in its first five-year journey. 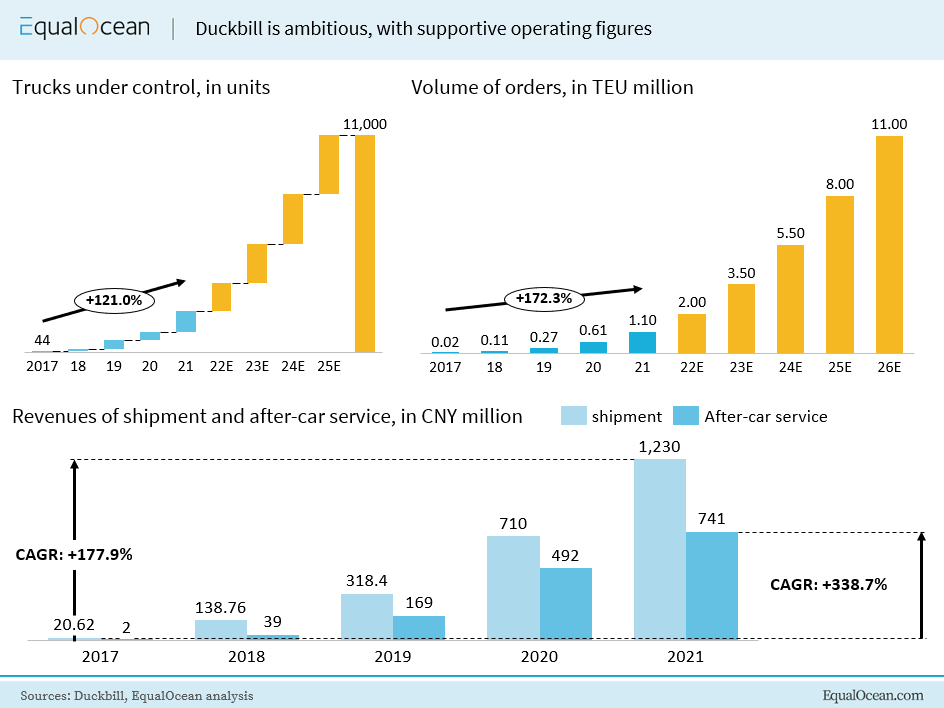 According to the official website, it garnered the crown in terms of trucking capacity and scale, with over 2,100 trucks under control and about 13,000 partnered vehicles by the end of 2021. The volume of orders topped 1.1 million TEU (twenty-foot equivalent unit) containers in the past year accordingly, 54 times larger than that of 2017, with a compounded annual growth rate (CAGR) of 172.3% from 2017 to 2021, putting it stands heads and shoulders above other competitors in China in this regard.

However, Duckbill's ambitions go much further than that.

It is accelerating its path of expansion actively to cover four more ports this year, namely Lianyungang, Nantong, Qinzhou and Haikou. Moreover, it also plans to build a fleet of more than 10,000 trucks serving globally by 2025; in its envisioned future, orders will accordingly enlarge over six times the size of its current operations.

Digitalization: There is hope

As with all startups EqualOcean covers, we care most about future opportunities and the potential of rising stars. Through an in-depth analysis of the company, we find a keyword in Duckbill's success — digitalization.

China's foreign trade volume stood at USD 6.05 billion in 2021, up 30.1% year-on-year despite the COVID-19 pandemic continuing to weigh on global trade, official data from the General Administration of Customs (GAC) showed earlier this year.

Buoyant exports have become the backbone of China's economy, for sure; however, with rising domestic labor costs, the labor-intensive manufacturing sector is falling out of favor with developed economies. The pandemic has accelerated this shift even more, with Southeast Asia, Africa and South America becoming more preferable options. Vietnam, for example, reported upward Q1 economic figures and a promising outlook when China was fighting with Omicron flare-ups in major manufacturing hubs like Shanghai. 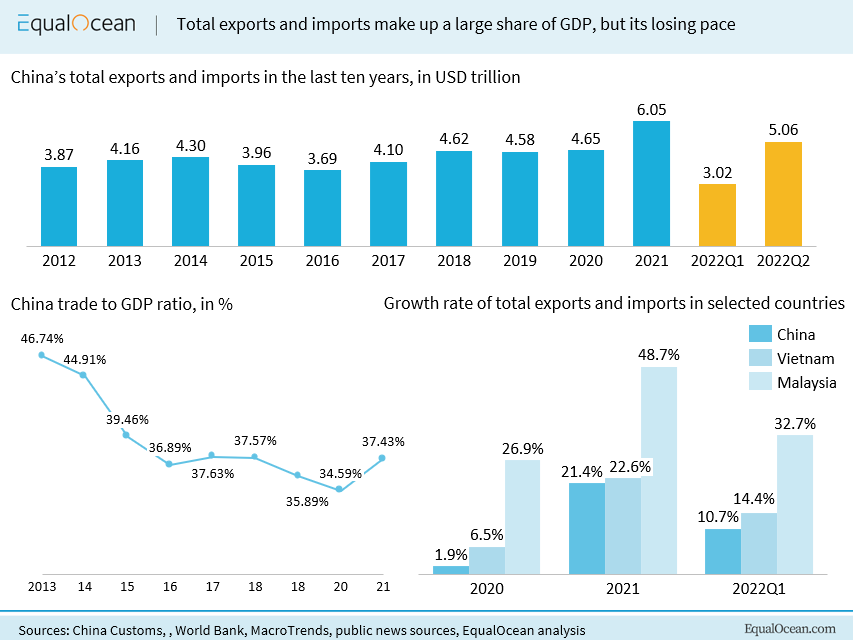 At the same time, the game of great powers as well as the continued industrial transformation and upgrading have all contributed to a weakening of the momentum of China's foreign exports.

"This trend is irreversible. We deeply believe that in the medium to long term, the sustainable growth for the container trucking industry pivots on utilizing digitalization and mobile interconnection to accelerate industry integration, carrying out scale operation, reducing operating costs while enhancing the customers' experiences," said Duckbill, who has faith in this assertion and been decisively engaged in it. The paperless campaign that has been vigorously promoted in recent years has further strengthened the industrial base in building a digital truck land transportation industry.

In fact, the whole world is going digital, and not just shipping. Since 2016, the world's largest container firm Maersk, SIPG (SH:600018), China Merchants Group, China COSCO and a slew of other logistics companies have put forward a vision for the development of digital transformation. While only until recent years, the urgency has been rapidly amplified.

It follows that the company attaches great importance to research and development along with technological transformation, the proportion of R&D personnel reached 30% as of the end of 2021, with dozens of in-house intellectual property rights annually.

The company's self-developed intelligent transportation service platform www.yazuishou.com provides international clients and freight forwarders a fully online, instantaneous, complete freight management system that offers immediate quotations, bookings, inspection services plus real-time 24/7 shipment track and trace under 'EXWLocal Manager.' It guarantees visible, reliable and efficient transportation services in the whole process of cross-border transportation from factories to targeted ports. Such certainty is even more crucial in the current VUCA world — volatile, uncertain, complex, and ambiguous — and is then only available in a technology-driven company like Duckbill via its forward-looking strategies.

When it comes to the internal data center, its dispatching system, transportation management and risk control system are also noteworthy. Based on big data, Chinese satellite navigation system Beidou as well as AI-powered algorithms, Duckbill enables intelligent dispatching and real-time dynamic supervision of trucks on the run. Instantaneous data exchange also creates positive synergies in processes of transportation, loading, terminal release and customs clearance. Highly granular customer data analysis is another highlight of its digitalization solutions, which enables Duckbill to maximize user contributions, helping it to personalize its services, identify and fill in the gaps in its current operational capabilities.

In addition to its ongoing digital enhancements to optimize customer experience, Duckbill also values its freight drivers truly. It has launched a one-stop service terminal for container truck drivers named Future Truck Boss (Chinese: 未来车老板), a freight version of Chinese ride-hailing giant Didi's app. The mobile app provides drivers with a series of after-vehicle services such as pick-ups, collaboration, billing and refueling, which greatly lowers the thresholds for drivers to enter the industry, saves time and boosts efficiency. At the same instant, thanks to Duckbill's intelligent dispatching algorithms and 7/24 manual support, drivers on the platform can also enjoy a stable, standardized and guaranteed workflow. This is something not offered by Duckbill's rivals in the traditional trucking industry. 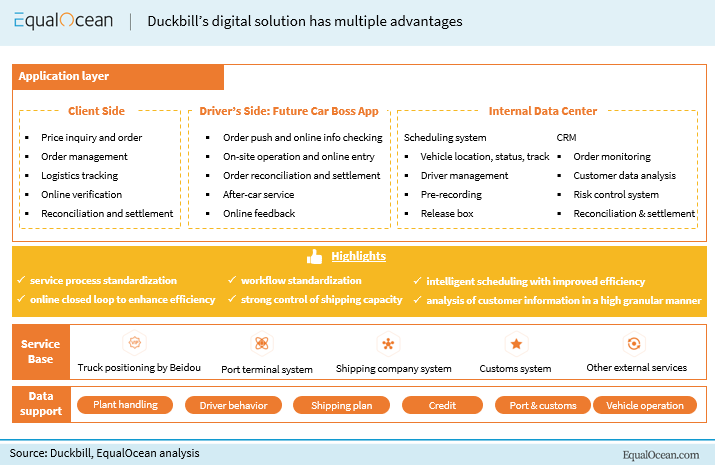 Tang Hongbin, the founder of Duckbill, told EqualOcean that the rational and effective application of new technology is the strongest driver of the industry. "We have made digitization our core competency at the current stage and continued to optimize customer service in exchange for a higher level of trust."

China overtook the United States as the world's largest trader in goods for the first time in 2013, and even in the eventful 2021, China still maintained that lead.

The fact that container land transportation between factories and domestic ports is entirely undertaken by domestic freighters has created the largest as well as the most geographically concentrated niche market in the world. According to the Ministry of Transport, the container handling volume at China's ports stood at 282.72 million TEUs in 2021, which gives the A-level player Duckbill in this segment a large growth potential.

"Looking ahead, we must embrace new technologies such as autonomous driving to strengthen our overwhelming advantages," added Tang, whose team also eyes on the research and development of autonomous driving in port scenarios with a CNY 200 billion market cap. Currently, Duckbill is incubating its sub-brand BOOM (Chinese: 弼马智能), with plans to have a production model off the line by 2024 and mass production capability by 2025. "We expect auto-driving to reshape the economic model of the container logistics industry."

The fully-automated logistic plant with zero carbon emissions is also on its list, which is designed to improve both security and efficiency via intelligent algorithms and big data analysis. It would also be a showcase of Duckbill's social responsibility.

At present, Duckbill gets further ahead of its challengers in a number of key indicators, including fleet size, transport flexibility and visibility, fulfillment capacity and the volume of orders. It is telling a new story to the capital markets: starting from container trucking, it is heading towards the prosperous track of building a closed-loop for the whole on-land logistics market.


This path contains sizable opportunities, although Duckbill's future may not always be roses and rainbows; maybe, long-termism is the best answer.