When will the Next Dyson Appear? Chinese Home Appliance Brands Going Global Analysis

Chinese home appliance exports are not only well-developed but also resilient. A line from an ancient Chinese poem goes as follows: "Only when the sea is crossed will the heroes show their true colors." Likewise, these companies working in a competitive but opportunity-laden sector will have an interesting future and many challenges ahead. 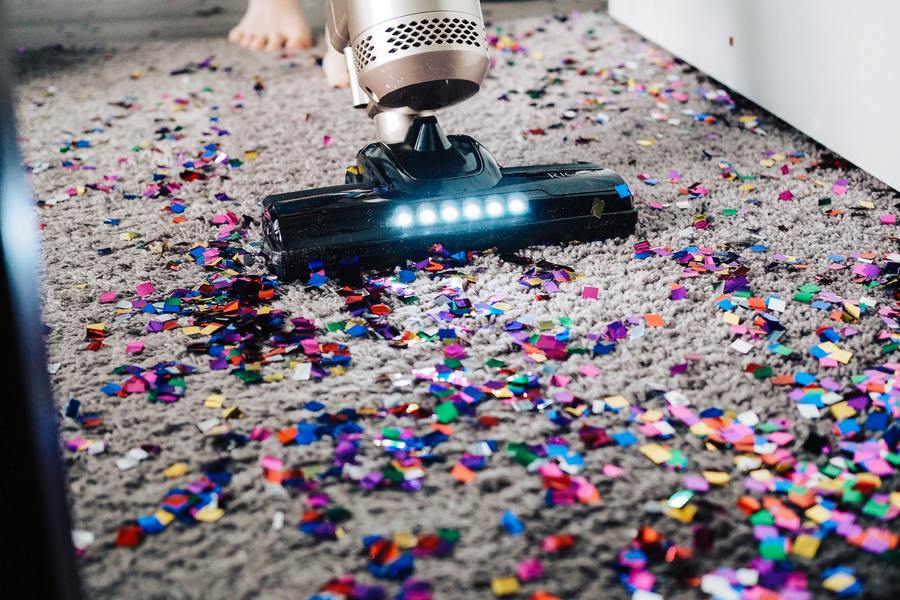 Home appliances are both durable consumer goods and necessities, with solid resistance to market fluctuations. As a major player in a globally competitive industry, the production scale of the Chinese home appliances sector continues to help it rank among the top in the world, and the overseas output has been outstanding recently. Time to look at how the market and the different players are shaping up.

According to Zhou Nan, secretary-general of the China Chamber of Commerce for Import and Export of Machinery and Electronic Products (CCCME) Home Appliances Branch, China's home appliances represent the industry that is most deeply involved in international competition. According to data from the General Administration of Customs of China, in 2020 China's total exports of household appliances were CNY 458.22 billion, up 24.2 percent year-on-year. In 2021, China's total exports of household appliances were USD 98.72 billion, up 22.3 percent compared to the same period last year. Currently, the share of China's home appliance exports in global trade is over 38%. 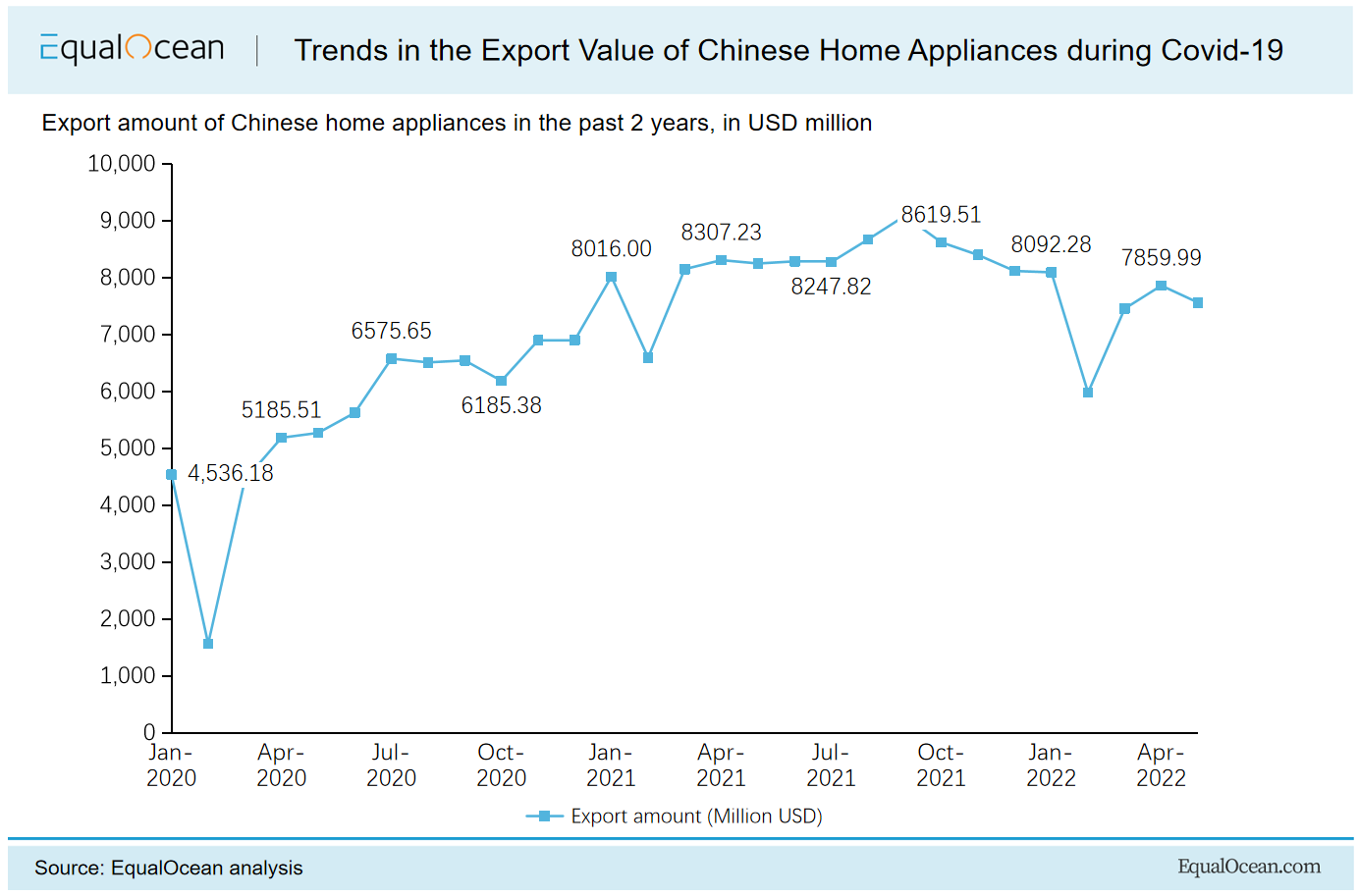 The evidence is clear: even during the epidemic, the export value of Chinese home appliances maintained a high growth rate. This was due to several reasons.

From a global market perspective：

First, the epidemic has brought about an increase in the rate of global markets going online. In an interview with EqualOcean, Yu Hao, founder of Dreame (Chinese:追觅科技), a manufacturer of smart cleaning robots, said that the epidemic has brought about a change in channels. Markets that were once predominantly offline channels, such as Europe and the US, showed a significant increase in online presence during the epidemic. This trend is not only reflected in the success of online platforms such as Amazon – even giant offline companies such as Walmart are also trying to make the transition to online models.

As the online channels develop a new trends, the birth of new brands is highly possible. Chinese home appliance companies are familiar with the marketing approach of using e-commerce platforms to launch new brands, seize a position and explode, so they can quickly adapt to using online channels to penetrate overseas markets and increase their market share.

Secondly, the epidemic has increased public demand for cleaning and significantly reduced the education costs of household cleaning brands for users. 55% of respondents to a 2021 American Cleaning Institute survey on consumer cleaning habits in the post-epidemic period said they cleaned and tidied up more during the epidemic than before. This is an excellent opportunity for manufacturers of cleaning machines such as ECOVACS (Chinese:科沃斯机器人), Dreame (Chinese:追觅科技), Roborock Tech (Chinese:石头科技), and Puppyoo (Chinese:小狗吸尘器).

In addition, exchange rate fluctuations and the depreciation of the currencies have also boosted the process of Chinese home appliance companies going abroad. The exchange rate of the US dollar against the CNY has risen from 6.38 at the beginning of 2022 to 6.76 in July, representing a 5% depreciation of the CNY. The devaluation of the CNY will enable exporters to convert their USD orders into more CNY at the time of settlement and increase their gross margins on the cost side based on the CNY denomination. Thus, the depreciation of the Chinese yuan can boost the export motivation of Chinese home appliance firms and improve their earnings performance.

On January 1, 2021, the Regional Comprehensive Economic Partnership (RCEP) officially entered into force. It means that the import and export tariffs among the member countries of the agreement will be significantly reduced, which brings more opportunities for Chinese home appliance companies' global layout.

The RCEP agreement can reduce the retail price of exported products, thus promoting consumer demand and enhancing the competitive advantage of Chinese companies with producers outside the RCEP region. At the same time, it also reduces the cost of imported components and raw materials for Chinese firms. Chinese customs statistics show that China's exports to the other 14 RCEP member countries reached 5.64 trillion CNY in 2021, with a growth rate of 16.8%.

In addition, in an interview on July 6, 2022, Williams, former deputy director of the National Economic Council and former senior White House trade negotiator, said that Joe Biden is expected to issue tariff reductions to China soon. Among the more than USD 360 billion in tariffs currently imposed on China, the order of magnitude of the taxes being reduced is roughly USD 10 billion. The US is the top exporting country for Chinese home appliance companies, accounting for over one-fifth of the total exports of China's home appliance industry. Over the years, trade friction between China and the United States has caused considerable pressure on Chinese home appliance exporters, and the intention of the United States to reduce tariffs is expected to benefit Chinese home appliance suppliers.

From the Chinese side：

COVID-19 catalyzed the overseas substitution effect and the development of overseas online sales channels for Chinese companies going abroad. During the early stage of the epidemic, the global market was greatly affected by COVID-19, causing tensions in the supply chain. Due to China's effective control, domestic factories resumed work sooner, and production was not affected too much, thus enabling home appliance exporters to increase their share of the overseas market rapidly.

In addition, ten Chinese departments, including the State Taxation Administration, the Ministry of Commerce, the People's Bank of China, and the General Administration of Customs, jointly issued 15 measures in April 2022 to enhance the convenience of tax refund processing, optimize the business environment for exporters and promote the stable development of import and export.

So which Chinese home appliance brands are currently going abroad? Which markets have these brands chosen? What are their main products? What are the localization experiences of those who have successfully gone overseas? With these questions in mind, EqualOcean has compiled information on some of the significant Chinese home appliance brands going abroad, as shown in the chart below. 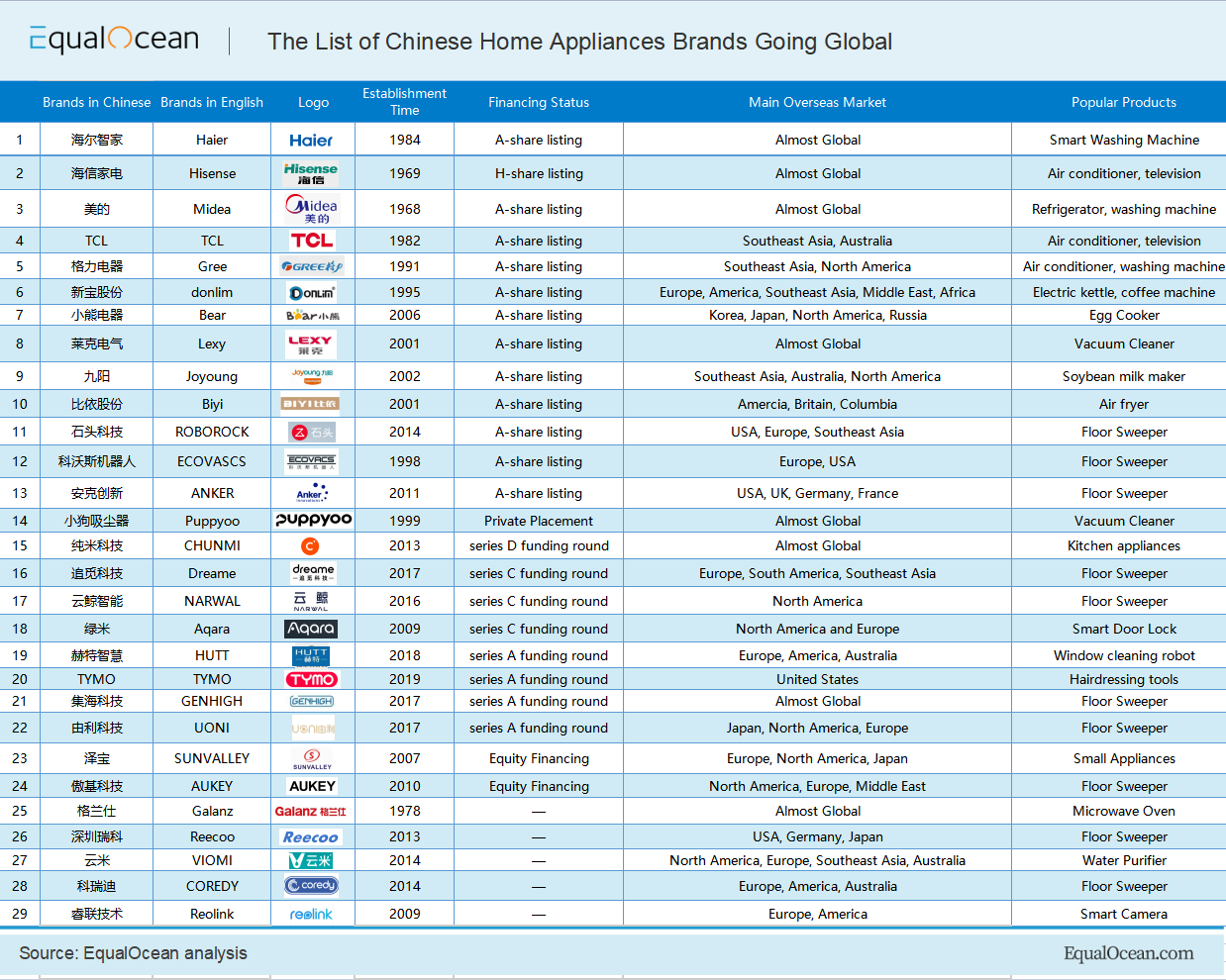 Overall, there are some common features in the product categories, market selection, and localization strategies of Chinese home appliance brands going abroad.

In terms of product categories, intelligent household cleaning devices are the main products going overseas. In addition, most brands are concentrated in the Guangdong region in southeastern China.

Unlike beauty brands that prefer Southeast Asia and Japan when it comes to going overseas, most Chinese home appliance companies choose their overseas markets in developed countries and regions such as Europe and America. For this reason, EqualOcean has drawn some conclusions from interviews with several companies.

In an interview with EqualOcean, Johnny Zhu, vice president of overseas business at ECOVACS (Chinese:科沃斯机器人), said that in terms of the floor cleaning robot market, product penetration in China is far less than overseas. In addition, service robots have strong technological attributes. Young people in developed countries are highly receptive to such products and are happy to get information on the Internet, which makes it easier for Chinese brands to use this as an entry point to seize market share. Therefore, Coors gives priority to countries with high per capita consumption levels as the key market for development. 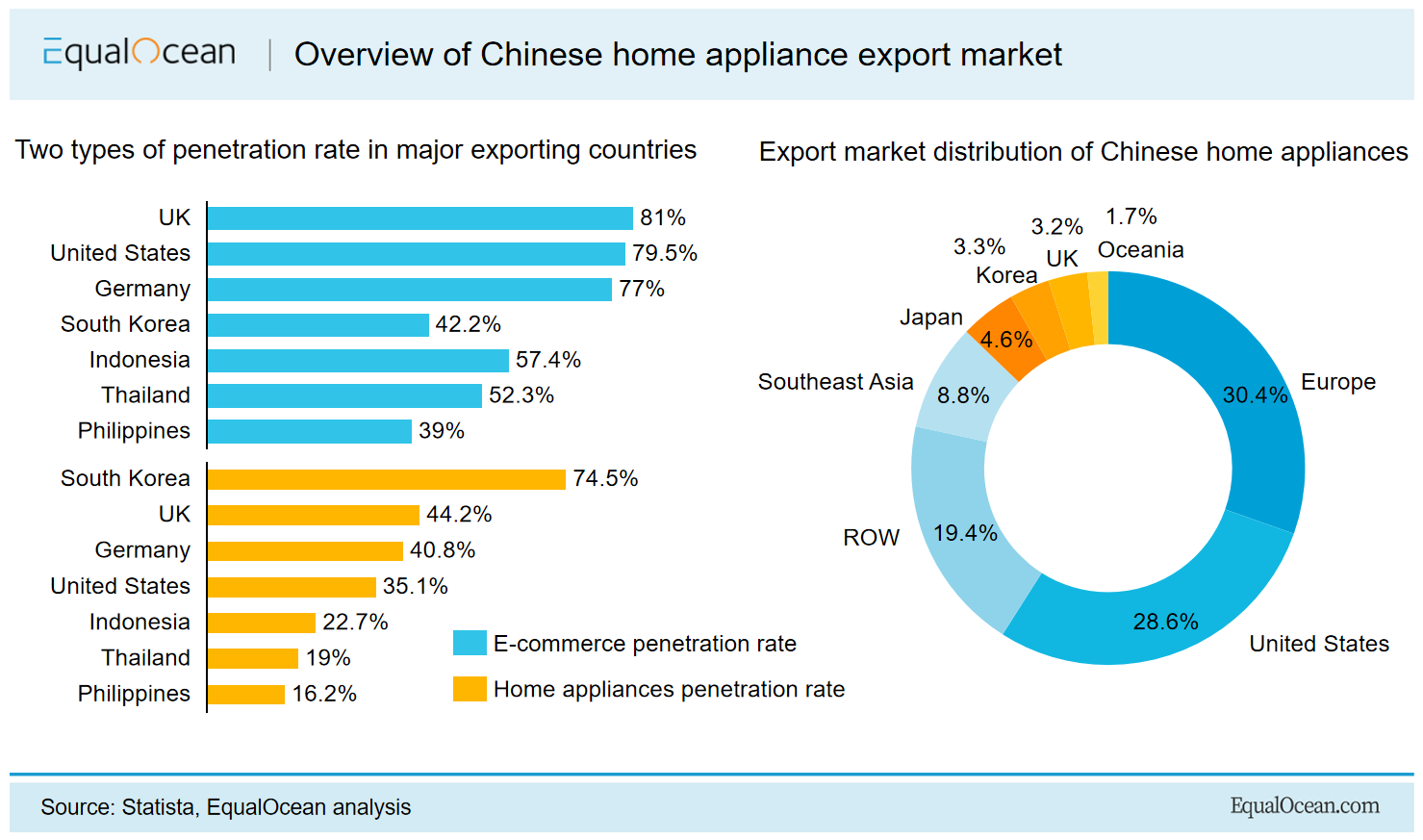 In an interview with EqualOcean, Max Richter , Vice President of Overseas Business at smart image maker Insta360 (Chinese:影石), mentioned that Insta360 has had a global perspective since its inception. More than 60% of the company's primary business revenue comes from overseas sales, mainly in developed countries and regions with solid consumer power, such as the US, Japan, and Europe. The overseas market has much greater demand and market size for video technology products such as sports and panoramic cameras, so the company achieves better performance in developed countries and regions where consumer awareness is more mature, and consumer power is stronger.

As one of the global fashion-tech brands, TYMO is launching in the US in 2019, intending to expand from hairdressing tools to the personal care market, offering quality assured personal care tools to middle-class women. Personal care tools are in demand and have a high penetration rate in the United States, so the competition is fierce. Qi Miao, the founder of TYMO, said in an interview that the goal of TYMO when it was first established was to be a global brand, not just a brand ‘Made in China’. In addition, Qi Miao stressed that if you want to globalize your brand, it is not enough to sell online; expanding offline channels is also crucial. The penetration rate of e-commerce in overseas markets is not as high, and the demand for offline channels is vast. In addition, most Chinese overseas brands focus on online sales, so TYMO's offline channel expansion can create misaligned competition with some Chinese overseas brands and seize the market in advance.

However, with the recovery of the epidemic in various countries and the weakening of the negative impact of the epidemic, China's electrical exports are also facing some challenges.

The first is the rise in raw materials and freight costs. The global market volatility caused by the Russia-Ukraine conflict has pulled some raw material prices. Data shows that, in March this year, the prices of copper and aluminum, the essential raw materials for home appliances, rose by 2.26% and 1.9%, respectively.

At the same time, the maritime logistics situation is unstable due to the different prevention policies in other countries. According to the Review of Maritime Transport 2021 report released by the United Nations Conference on Trade and Development (UNCTAD) in November 2021, maritime freight rates are expected to remain high for a while in the future due to strong demand and a shortage of containers.

Furthermore, when the negative impact of the epidemic subsides, and global markets recover, China's export substitution effect will diminish accordingly. Data from the General Administration of Customs of China shows that from January to February 2022, China's electrical exports amounted to CNY 89.702 billion, down 5.9% yearly.

Chinese home appliance exports are not only well-developed but also resilient. Although, in the short term, the globalization of Chinese home appliances is facing a series of unfavorable factors such as declining demand after overdraft, global currency inflation, lack of capacity due to repeated epidemics, and rising raw material prices, Chinese home appliance brands will be able to solve their problems and seize the rare historical opportunities in overseas markets when they are well prepared. A line from an ancient Chinese poem goes as follows: "Only when the sea is crossed will the heroes show their true colors." Likewise, these companies working in a competitive but opportunity-laden sector will have an interesting future and many challenges ahead.

CONTACT US
Scan QR code to contact us for professional consulting services
Next article
China's Digitized Container Duckbill Speeds Up, Faster and Smarter