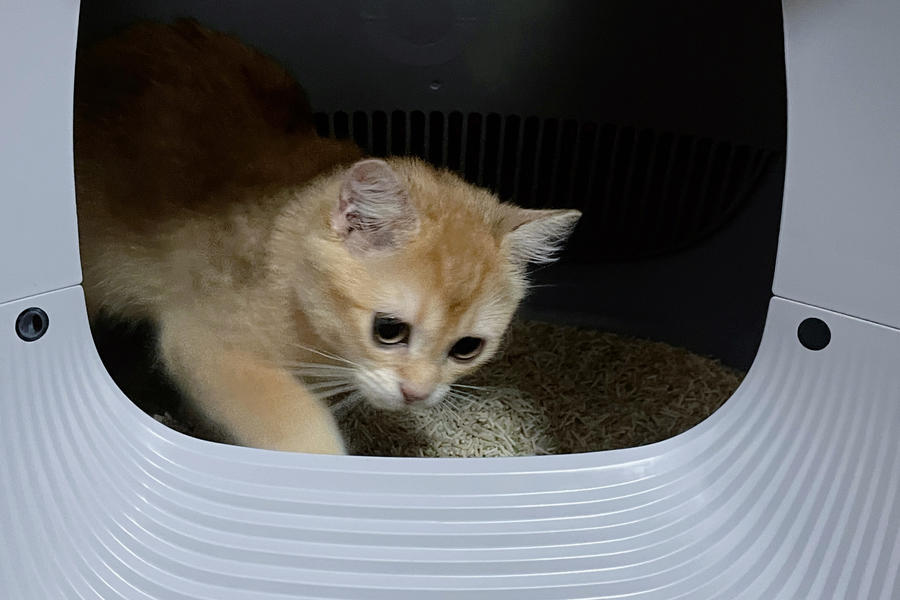 With the development of society, the improvement of the economic level and increasingly fierce competition in the job market, young people working outside their hometown are gradually becoming "empty nest youth". They began to take pets as their companions and to treat them better. Cats, cute, well-behaved and suitable for domestic raising, can fill the loneliness of young people, thus giving rise to the cat industry, AKA the so-called 'cat economy', an emerging 100-billion-yuan Blue Sea.

According to the White Paper of Chinese Pet Industry in 2021, the market size of the whole pet industry in 2021 is close to CNY 273.7 billion, an increase of 19% over 2020, with the growth rate returning to the pre-epidemic level. Among them, the market size of cat consumption reached CNY 106 billion, and the number of pet cats reached 51.05 million. The "cat economy" is growing at an unprecedented pace. 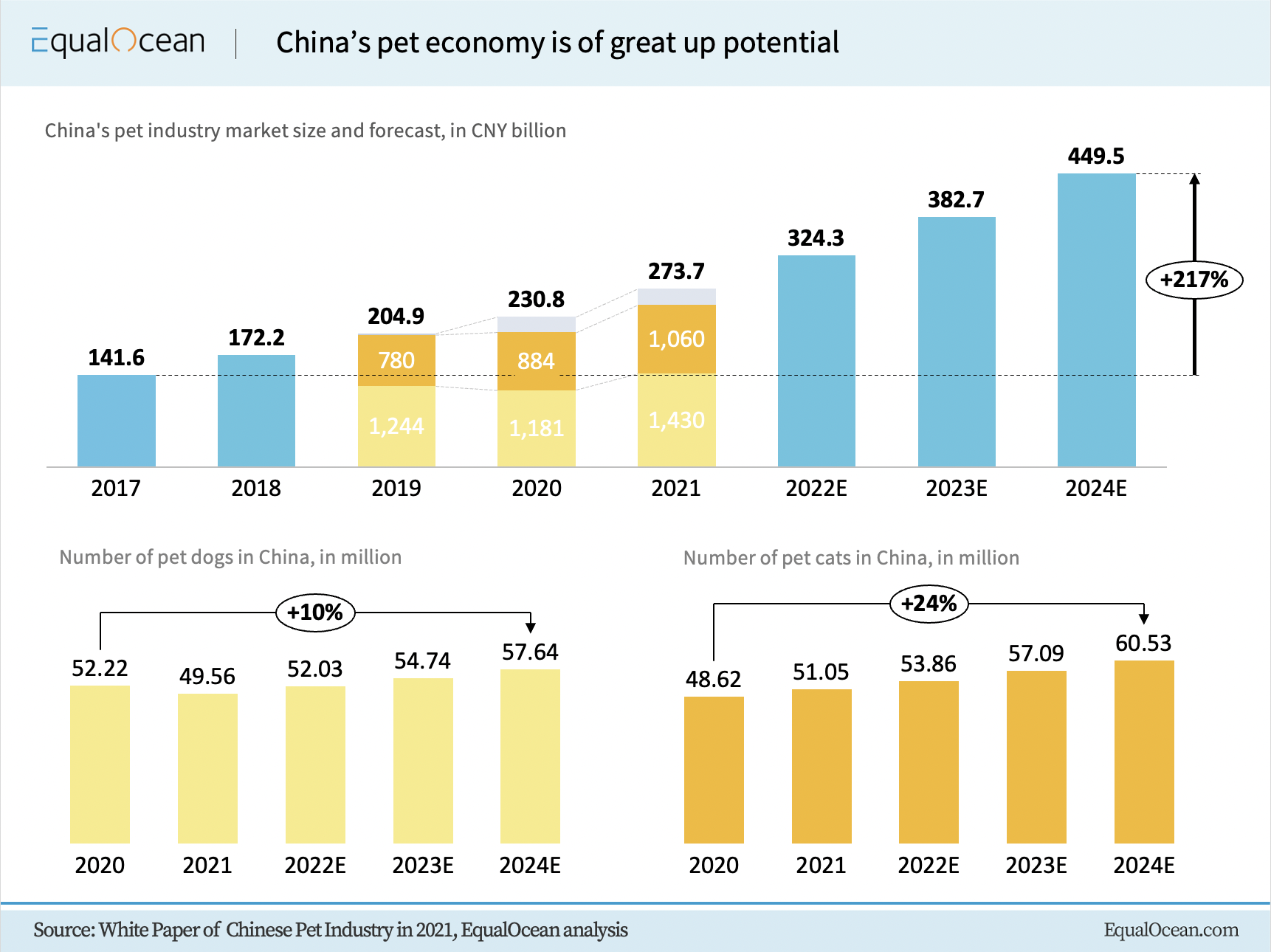 Impetus of the rise of the Cat Economy

Jinjun Zhong, founder of the cat-smart lifestyle retail service platform Unipal, told EqualOcean, "Behind the rise of an economy is a change in human nature and social environment.

According to Urban Wisdom Advancing with China's 2021 survey of young people aged from 18 to 40 living in first-tier cities in China, being single (more than 75% of respondents were unmarried), having a limited income (50% of respondents earned less than CNY 200,000 per year) and living in a cramped space (90% of respondents share rents with others) are their three most prominent features.

However, these seemingly negative factors are the most significant driving forces behind the rise of the cat economy.

According to data from the Ministry of Civil Affairs of the People’s Republic of China, the single adult population in China has reached 260 million in 2021, with more than 250 million one-person households. Life pressure and busy work make late marriage and late childbearing a common phenomenon in today’s China, and "loneliness" brings them unavoidable mental stress. Cats can solve this problem perfectly. Cat is a kind of animal that can provide a lot of emotional value with little effort from the owners, thus the explosion of the "cat economy" is easy to understand, as it greatly compensates for the emotional needs of young people today and can even easily eliminate their psychological stress. "This single economy has, to a certain extent, accelerated the rise of the cat economy," Zhong Jinjun told EqualOcean.

In addition, for young people working in big cities, their situation is made even more special by the limited living space. Most of them live in apartment houses of less than 50 square meters, and nearly 90% of them share accommodation with others which further compress their living space. Such a cramped living environment is restrictive for active dogs, but perfect for "lazy" cats.

As the younger generation of pet owners started to become the mainstream of China's pet ownership market (46.3% post-90s pet owners in 2021), the daily dog walking started to look like a stressful prospect for young people who often work overtime or go on business trips; in other words , “the time cost, space cost and emotional cost of raising a dog is too high”, the founder of Unipal told EqualOcean. With just a litter box, food, water and some toys, cats are able to take care of themselves in a small space, "which is crucial for young people in a fast-paced life." 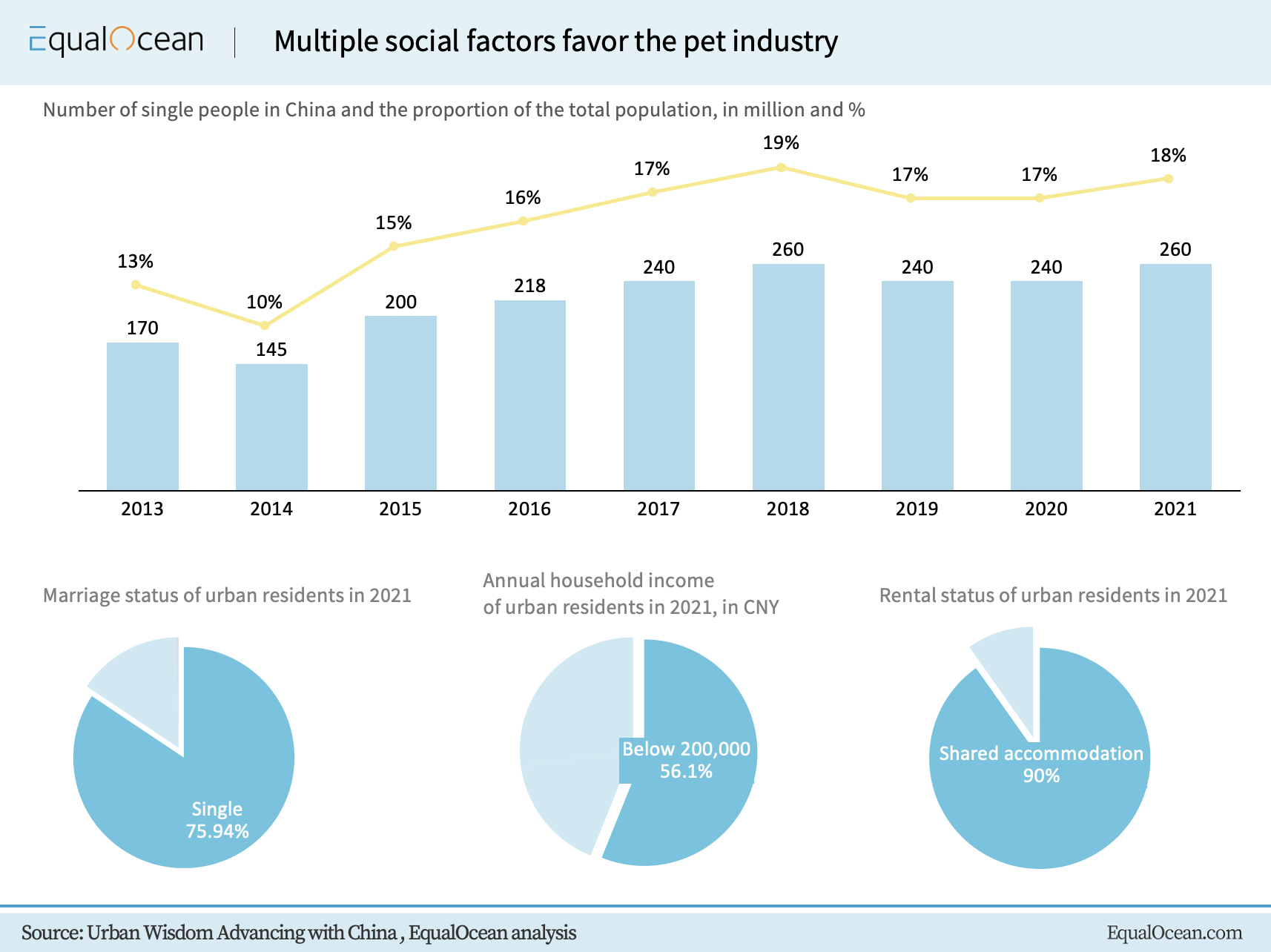 Opportunities from the rising Cat Economy

The cat economy has been the core driver of the pet economy in recent years, overriding the negative impact of the decline in the dog economy.

Therefore, the huge opportunities brought by the cat economy can be seen in three aspects: pet food, pet appliances and pet services.

First, from the perspective of food, fine feeding and 'anthropomorphic' (human-like) needs can bring differentiated competition to the industry, helping brands and consumers to establish a more lasting consumer service relationship.

More and more people see their pets as their family, it goes without saying that no one will treat "family" in a harsh way. Therefore, cat owners are more concerned about the health of their cats, which also to a certain extent promotes the formation of the trend of refinement of pet feeding and promote the continuous upgrading of pet food. For example, RedDog，a pet nutrition product R&D and retail enterprise, provides a refined range of nutritional products for different growth stage and health status of cats and dogs, which is conducive to the improvement of the overall health of pet cats, and will become a competitive differentiator making the brands and cat owners to establish a lasting consumer service relationship.

In the premise of ensuring the safety of pet food, more and more brands have begun to inject the concept of anthropomorphism and Chinese fad into their products, which caters to the aesthetic pursuit of today’s young people. Driven by the anthropomorphization and other Chinese pet fads, many brands have launched their own IPs and innovated their sales models, which will further expand the brand segmentation.

Gong Wu, brand general manager of pet nutrition company Red Dog (China), also told EqualOcean, "Young people pursue new trends and coolness, and they like the good-looking packaging of national brands; and in addition to the packaging that caters to the aesthetics of Chinese young people, good content can also continue to add advantages to the brand, such as the scientific knowledge of pet care, so that more and more people will pay attention to pet health."

Second, in terms of the electrical appliances, cat owners’ typical young age and their sophisticated tastes give a broader prospect for intelligent products.

With the development of intelligent technology and the Internet of Things, intelligent pet products are increasingly sought after by pet owners for their convenient operation. Along with the cat economy boom and the endless pursuit of technology by a new generation of pet owners, the term "cat networking" came into being.

Cat networking is the recording of all data of pet cats through relevant smart products, and analyzing, monitoring and calculating through the network. For example, Unipal has launched its own online APP to monitor the health status of cats and tell cat owners in a timely manner. For cat owners in first-tier cities, they often work overtime and travel, and thus have a strong demand for monitoring their cats in terms of drinking, eating and defecation, which brings a wide space for intelligent supplies such as smart water dispensers, smart cameras, smart feeders and health monitoring devices.

Third, in terms of service, food and supplies brands can work together with offline pet stores and pet hospitals to further broaden their offline channels.

In the future, pet services will get rid of a single specific service model, but will launch customized services in the food, supplies, medical, service, and other segments around the entire life cycle of the individual pet cats and the preferences of different cat owners. Especially for offline channels, creating a customized overall service system and process, and launching subscription-based products, treatment, beauty washing and nutrition management for individual cats will be a concept with great appeal for cat owners.

In the entire pet economy, the cat economy is an evolution of the "single economy", the "indoorsy economy" and the "lonely economy". The artist Giacometti once said, "In a fire, between a Rembrandt and a cat, I would save the cat." The story between Giacometti and Rembrandt is unknown, but for modern people, it is probably easier and more comfortable to get along with cats than with people.