Who is Apple in China? Deep Analysis of 2022 China Consumer Brand Globalization Report

EqualOcean believes in the value of globalization and our mission is to connect China with the world. A line from an ancient Chinese poem goes as follows: "Only when the sea is crossed will the heroes show their true colors." Likewise, these companies working in a competitive but opportunity-laden sector will have an interesting future and many challenges ahead. 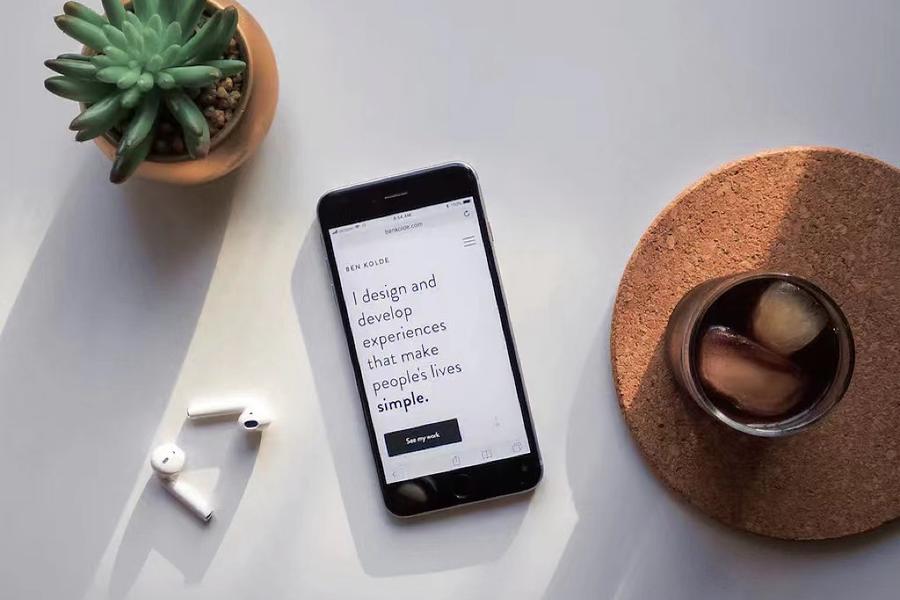 Equalocean has been continuously paying attention to Chinese brands' performance in overseas market. China has a large number of consumer brands that perform well in various fields in both domestic and overseas markets. In previous articles, we have introduced the performance of Chinese home appliance brands (The Initial Achievements of Chinese Home Appliance Brands on the Way of Globalization) and beauty brands (Industry Watch: Chinese Cosmetic Brands In Japan) on the way of globalization. This article will bring you the first insight into the consumer electronics chapter from 2022 China Consumer Brand Globalization Report, released by EqualOcean recently.

Some Chinese smartphone brands, such as Xiaomi (Chinese: 小米) Vivo and OPPO, are always at the top5 position in global market. This article will first introduce the overview of the smartphone market in the global consumer electronics category. After that, the export of Chinese smartphone brands will be analyzed in detail, especially in terms of overseas market distribution and website performance.

Taking smart home devices as an example, consumers can control them on their mobile phones, making it possible to have an intelligent and systematic home. In the future, new technological products such as VR and AR will also be possible to connect with smartphones to explore a connected ecology, generating higher acceptance and new opportunities for the entire consumer electronics market.

China's mobile phone penetration rate is high, increasing from 92.5 units per 100 persons in 2015 to 116.6 units per 100 persons in 2020. The Chinese mobile phone market is now becoming saturated with a large number of domestic brands and increasing competition. Huawei, Xiaomi, OPPO and VIVO were dominating most of the market, while other small brands are gradually exiting the market.

The Export of Chinese Smartphone Brands (compared with Samsung and Apple) 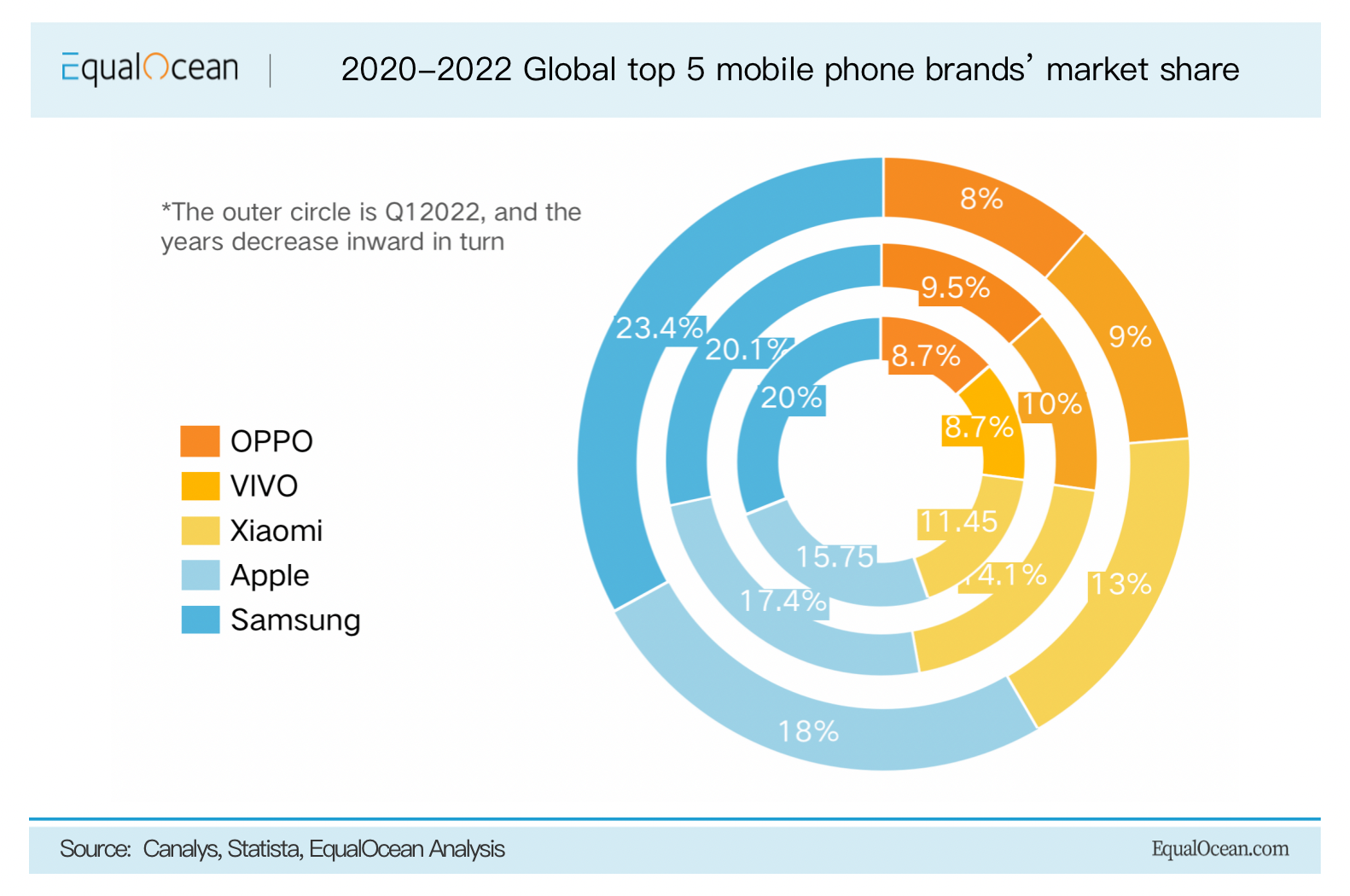 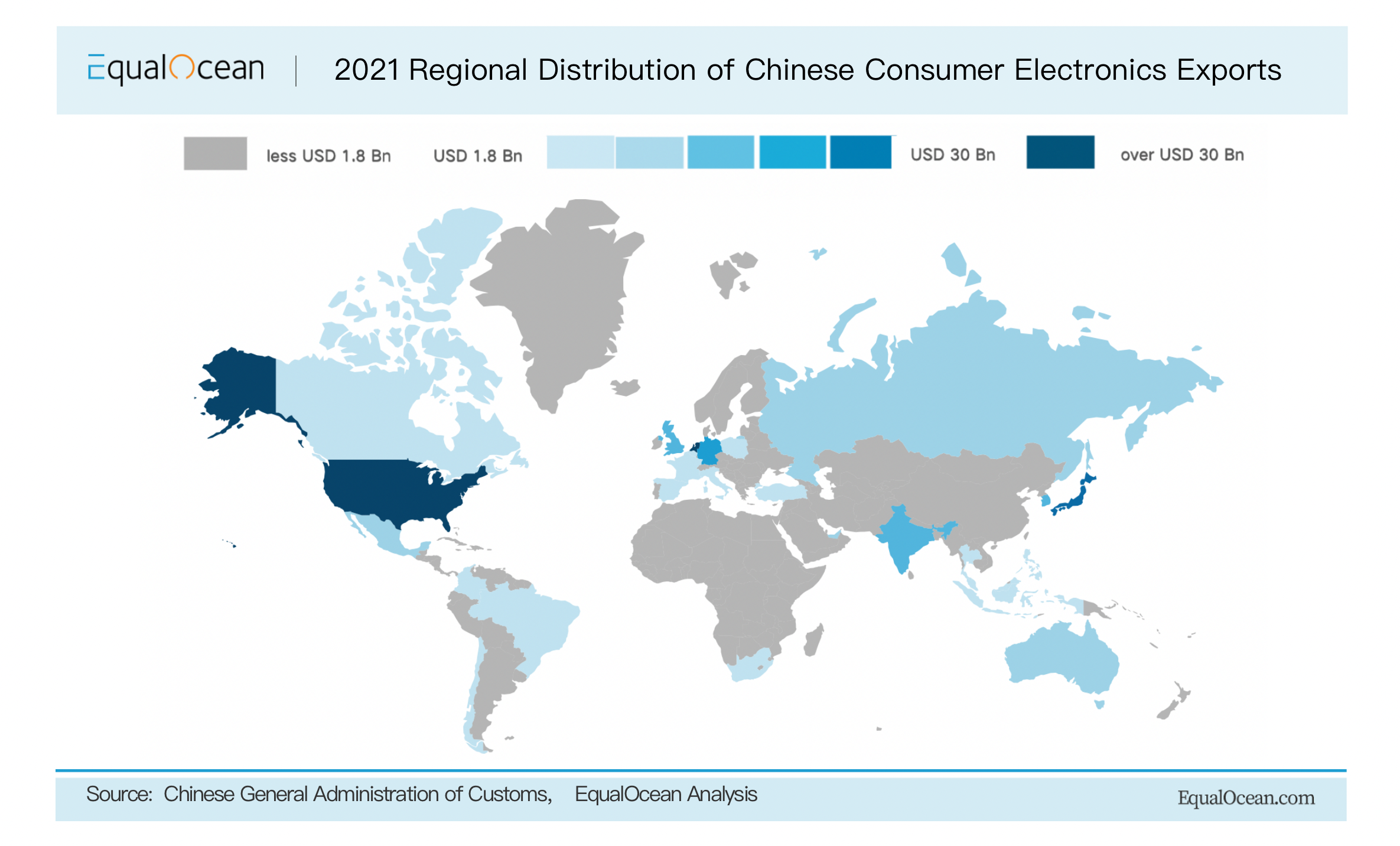 According to the distribution figure, it is clear that Chinese consumer electronics overseas mainly concentrates on emerging markets such as Southeast Asia and South Asia. In Europe and America, the South Korean brand Samsung and the US brand Apple led the market. In addition, Samsung and Apple also account for a significant share of emerging markets; thus, Chinese mobile phone brands still face an intensely competitive environment.

According to the data from GoogleTrends, the three Chinese brands have a minimal share in developed markets, while Apple and Samsung are developing well in both developed and emerging markets.

Xiaomi has a high market share in Southeast Asia and Eastern Europe, VIVO is mainly developing in Latin America and Southeast Asia, and OPPO's overseas market mainly focuses on Southeast Asia. Currently, Chinese consumer electronics brands' export strategy is essentially cost-effective. The threshold for entering developed markets is high, so the most suitable choice is to explore emerging markets first.

In addition, Similarweb data shows that the male-to-female ratio of consumers of the three Chinese brands is about 7:3, while the proportion of users aged 18-34 is about 60%. Therefore, Chinese brands can pay more attention to the needs of Generation Z (people born in the late 1990s to early 2010s) and male users when exploring overseas markets and also consider female and older users. 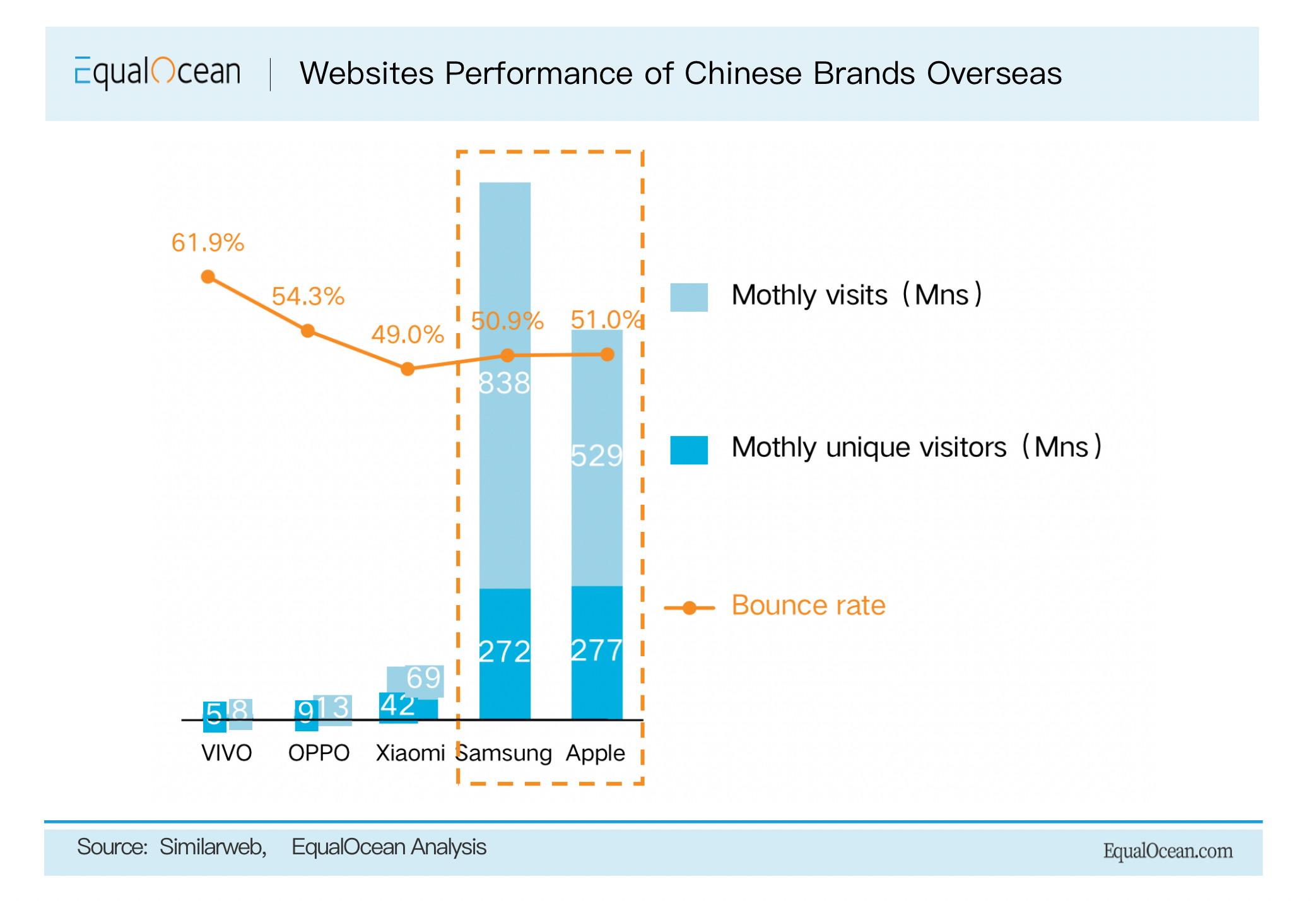 Overall, the number of visitors for all three Chinese brands is much smaller than for Samsung and Apple. Among them, Xiaomi has the largest monthly visits, while VIVO and OPPO are similar. The data shows that the volume of Chinese mobile phone brands overseas is relatively small, and there is much space for expansion. It is worth noting that Xiaomi's website has the lowest bounce rate, indicating that its overseas independent website has higher information effectiveness than the other two. However, all three bounce rates are relatively high, suggesting they need to improve their independent website building. 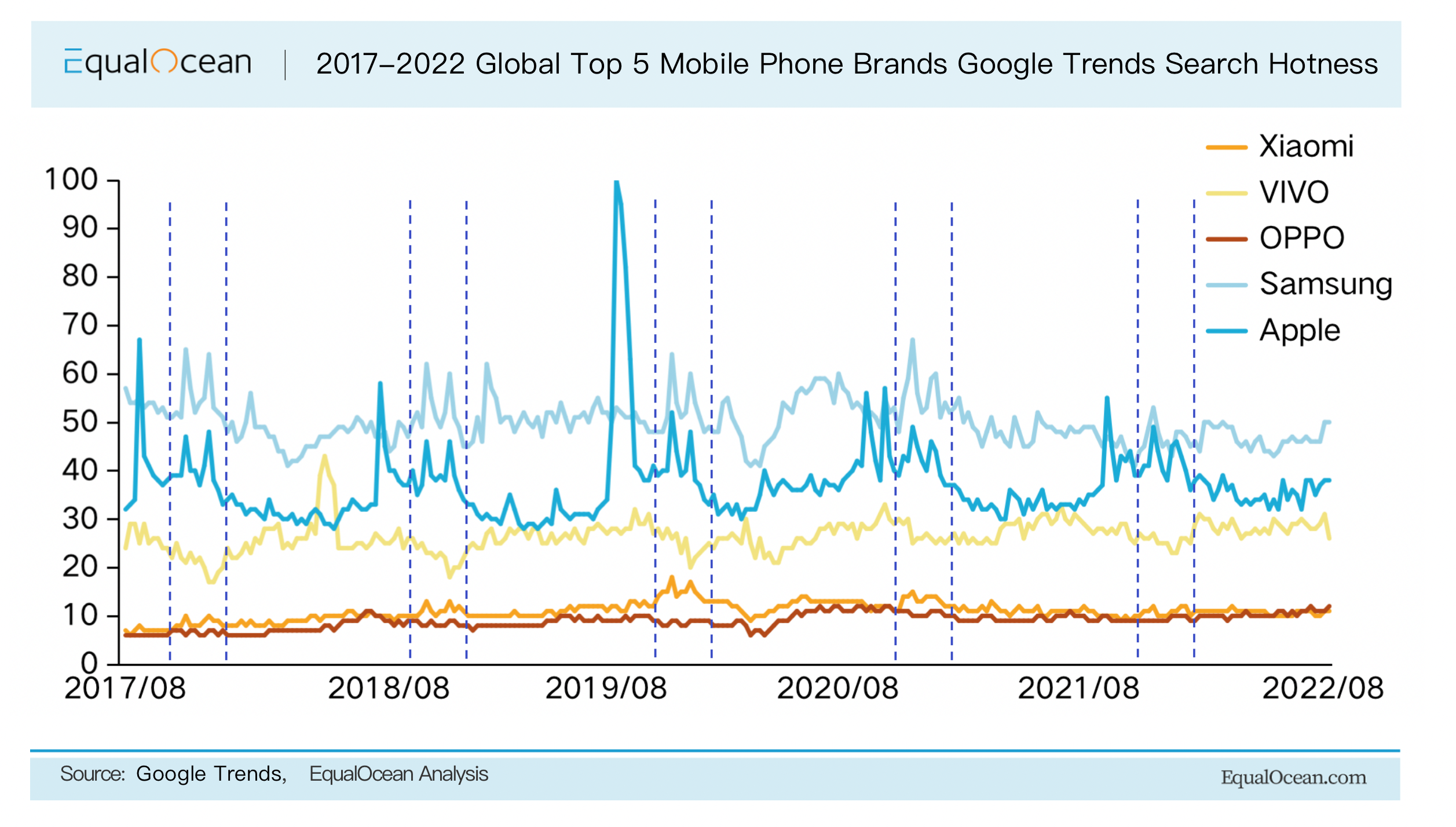 Data from Google Trends shows that at the beginning of Black Friday every year, the popularity of Samsung and Apple will reach a peak; Xiaomi also has this cyclical feature, but its publicity efforts are much smaller than those of Samsung and Apple from the peak magnitude; the trend change of OPPO is not apparent, while VIVO shows an opposite trend. Therefore, when going abroad, Chinese brands should seize the opportunity of major overseas festivals and shopping sales, increasing publicity to improve their brand power and popularity. 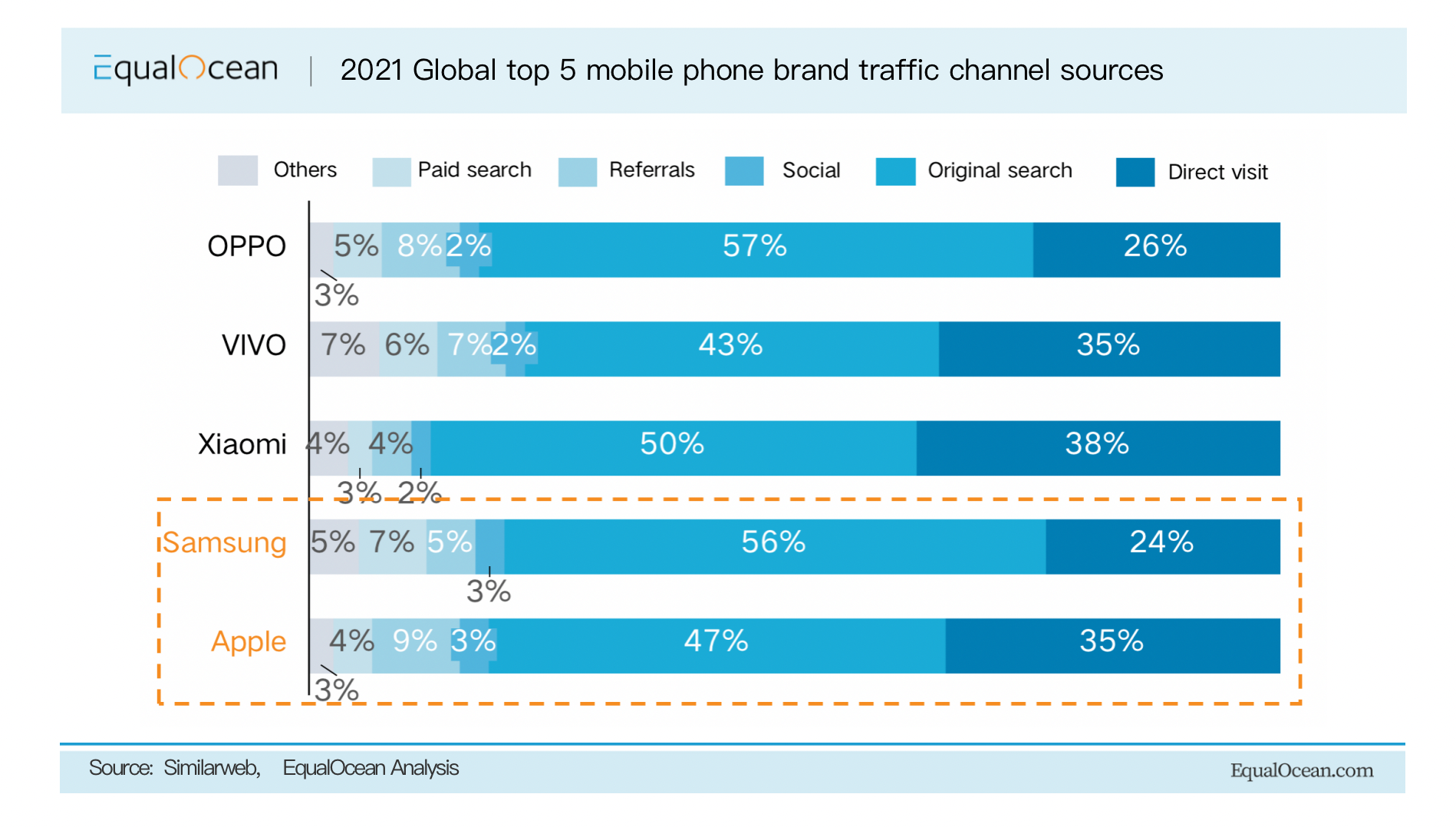 Direct Visit: Traffic from users directly entering the URL, using a bookmark or saved link, etc. Direct traffic can be used as a barometer for brand strength (awareness and demand).

Organic Search: Refers to the search results of a search engine that cannot be influenced by paid advertising. Is the site well-optimized for SEO? When there’s a correlation with direct traffic, it indicates strong brand awareness as many organic visits are generated by branded terms.

Referrals: Website that receives a large amount of traffic from referrals is likely to have a strong affiliate strategy or enjoy significant media coverage.

Others: Including direct links to brand websites through emails and advertising sites.

In terms of the overseas traffic channel sources, direct visits and original search traffic of the three Chinese brands are similar to those of Samsung and Apple, which shows that they successfully build their brand power. However, the traffic share of the three brands in social media and paid search is lower, indicating that user loyalty and stickiness are still weak. In the future, Chinese brands can increase their overseas marketing efforts, especially through social media, to establish deeper reach with consumers and enhance user loyalty and brand influence.

CONTACT US
Scan QR code to contact us for professional consulting services
Next article
Consumer-Grade AR Glass (Smart Glass): The Next Generation of Computing Device