It is said that ZTO Express will do a second IPO on the HKEX, which is attracting increasing attention in public. Not only could its second IPO help to raise more funds, but also may allow more express firms to raise capital. 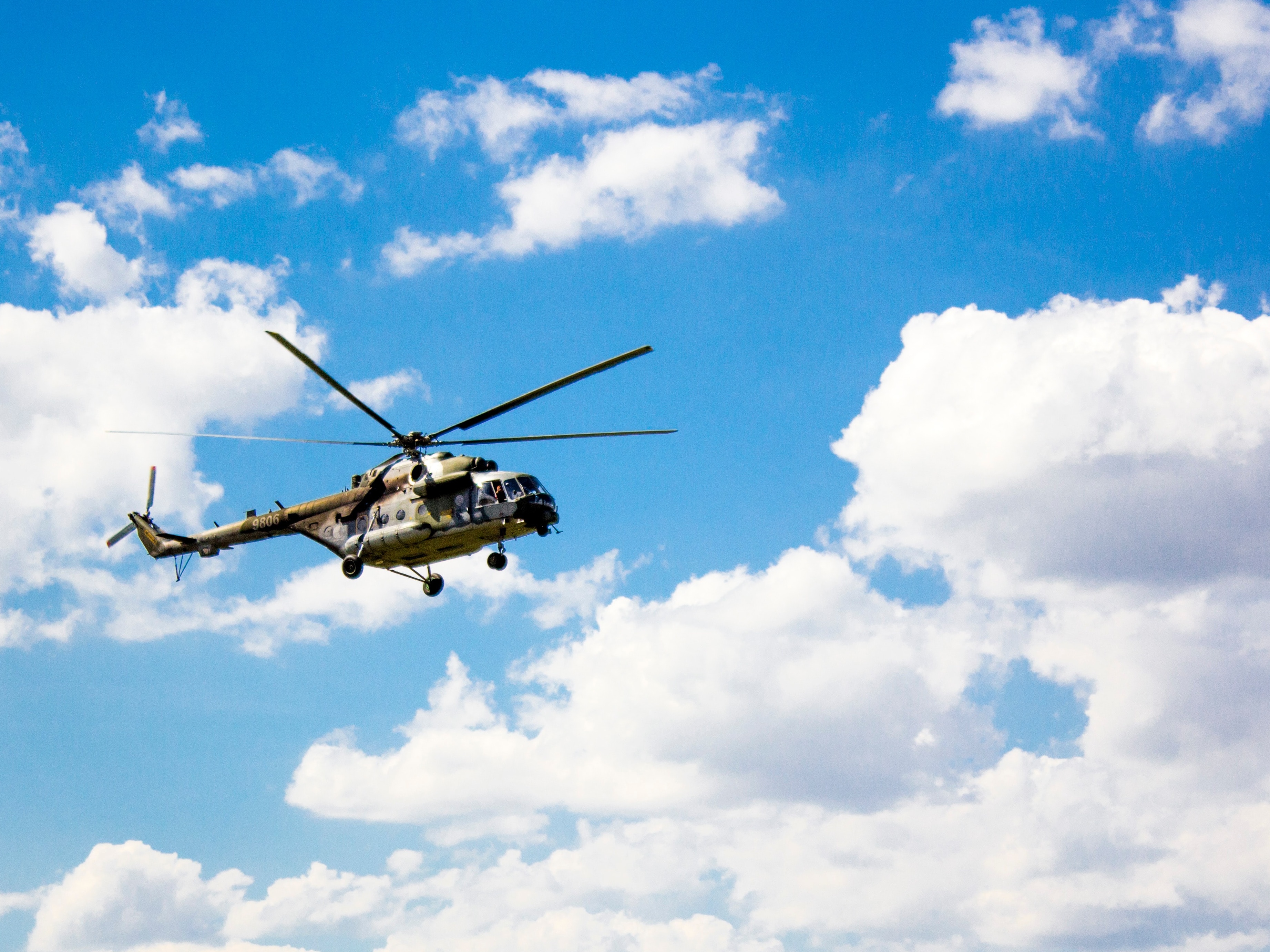 ► Even if the firm is negatively affected by the COVID-19, it still has the highest gross profit margins and order volumes when compared with competitors.

► ZTO Express has core competitiveness in its efficient management mechanism and lower costs, which is allowing it to grow faster.

Delivery company ZTO Express is communicating with investment banks these days, seeking a chance for a second IPO. It is expected it will go public at the end of 2020, raising a total of CNY 1 billion. More and more China concept stocks are heading back to HKEX, such as Alibaba, Wangyi and JD. In other words, HKEX is becoming the target of a second IPO wave for US-listed China concept companies.

The logistics service firm has developed from a local business to a multinational express company that offers services in the US, Korea, Germany, Japan, etc. As of 31 March 2020, it had 30,000 service networks, 90 transfer centers and 7,700 transport vehicles. In 2016, ZTO Express successfully went public in the NYSE, the second largest IPO after Alibaba.

Why did the express firm choose NYSE for its first IPO instead of SSE? There are two main reasons. Firstly, going back to 2016, the China Securities Regulatory Commission (CSRC) had tighter scrutiny for its IPO, which cost more time to go through the inquiry process. On the contrary, the US's registration-based IPO system helped the firm to be listed in the NYSE for a shorter time. Secondly, an overseas IPO is able to give more access to foreign investors. Specifically, it successfully raised funds from some foreign capital firms like Sequoia Capital and Hillhouse capital, from 2013 to 2015.

Before COVID-19, ZTO Express showed an increasing trend in its net incomes and parcel volumes. As for net incomes, there was a 68% increase from 2017 to 2019 while also a growth of 95% in parcel volumes. This rapid increase may due to its continuous expansion; the firm has 90 global transit centers and around 98% coverage in domestic cities so far, and its daily order volumes even surpassed 0.1 billion in 2017. However, under the shock of COVID-19, its net income has decreased to USD 0.053 billion in the first quarter of 2020, a 45.6% decrease when compared with last year. Because of the government restriction on transportation during these days, ZTO Express is facing higher costs from labor expenses and fixed costs. 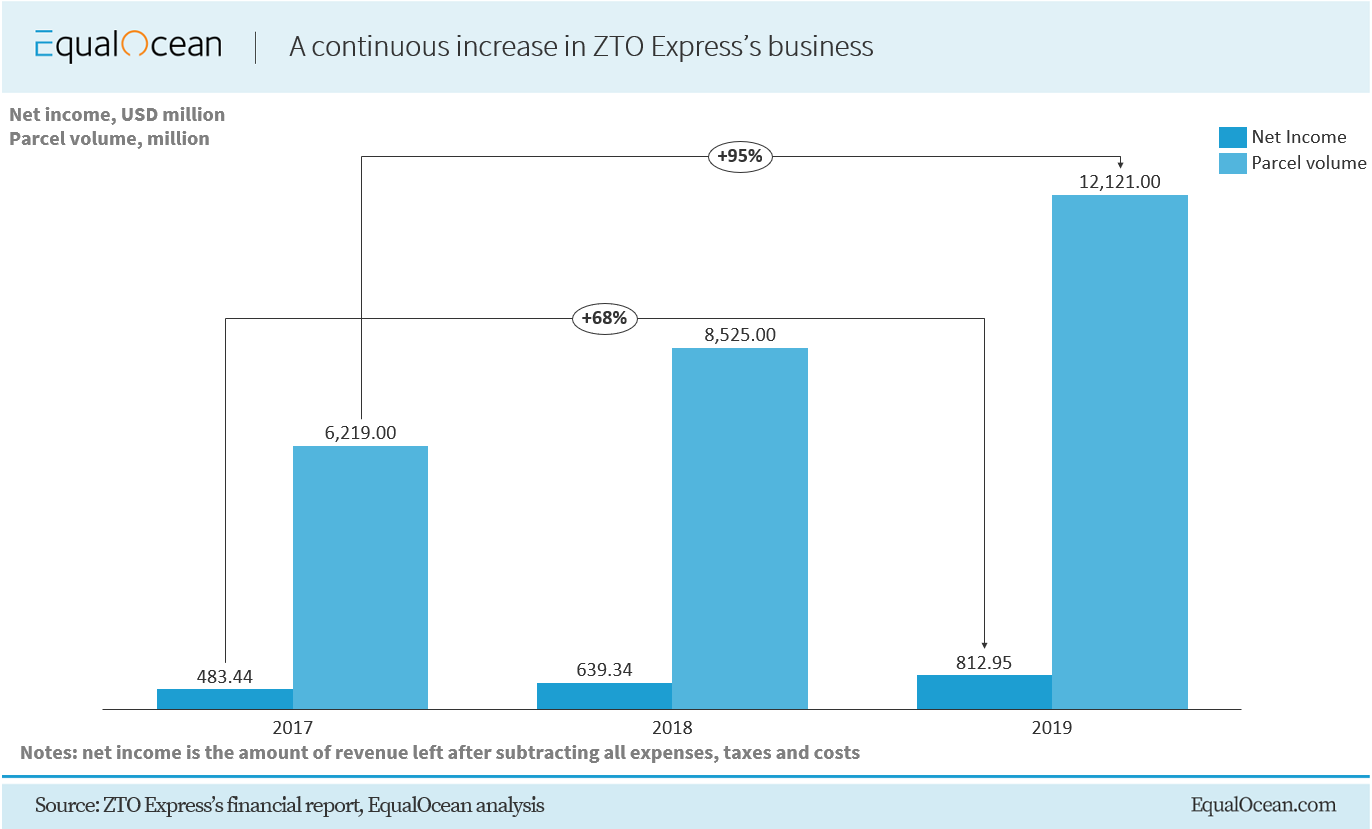 But what is the core competitiveness of the logistics service firm that helped it grow so fast before COVID-19? To begin with, the firm has a good management mechanism. Specifically, it has formed a community of shared interests among headquarters, employees and alliance businesses. After transferring their shares to some franchises, ZTO Express’s stakeholders have the lowest shareholding ratio in the express industry, 35.5%. Moreover, the firm was the first to conduct a stock-based incentive in the express industry, allowing employees to hold shares. With these two benefit-sharing schemes, ZTO Express has more stable management teams and stronger cohesion.

Except for the management mechanism, the express firm also has comparatively low costs. Thanks to its strengths in infrastructure, it has massive private lands that help avoid rental costs and direct vehicles to improve transport efficiency. For instance, it had the lowest transport costs in a single ticket, CNY 0.68, compared to Yunda Express’s 0.84 and STO Express’s 0.85 in 2018.

To further understand the express firm’s strengths, it is necessary to compare it with STO Express, YTO Express and Yunda Express. ZTO Express was the last one to set up, but it has gained a tier-one position in the express industry, in terms of gross profit margin, transit center, market value and daily volume. For instance, ZTO Express is focusing on its main business – which is express delivery, so it has the highest number of transit centers. Inversely, other express firms were trying to enter e-commerce, but some of them failed. STO Express’s ‘Ai Mai Chao Net’ could be regarded as an example; that was closed within two months. On account of ZTO Express’s reputation in express businesses and its lower costs, its daily order volume achieved the highest figure of 2951, further increasing its gross profit margin. Even after COVID-19, it also had a total order volume of 2.37 billion in the first quarter of 2020, higher than Yunda Express’s 1.91 billion and YTO Express’s 1.67 billion. 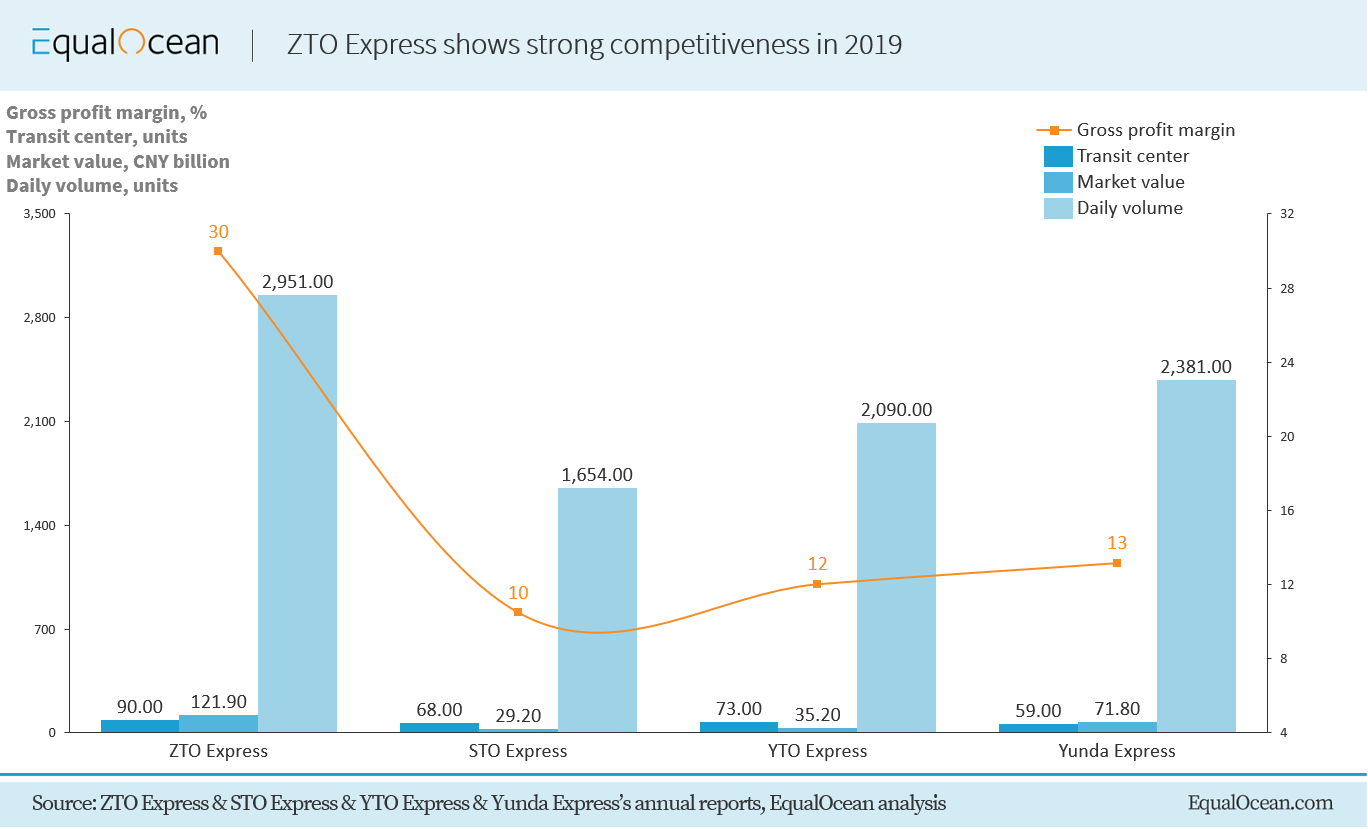 In a word, although COVID-19 exerts a negative impact on the express industry, ZTO Express is still in a high-end position. But why is it planning to go public on the HKEX? Maybe it wants to catch the trend of doing a second IPO in HKEX, or it hopes to add cash flow to offset the decrease in its net income under COVID-19. If it can go for a second IPO in HKEX and raise CNY 1 million successfully, other express companies may also find ways to raise capital in the future.