Too Big to Fail 3.0: Meituan Struggles to Become 'Amazon for Services'

The wild growth of Meituan has produced branches and leaves that need some fine pruning. 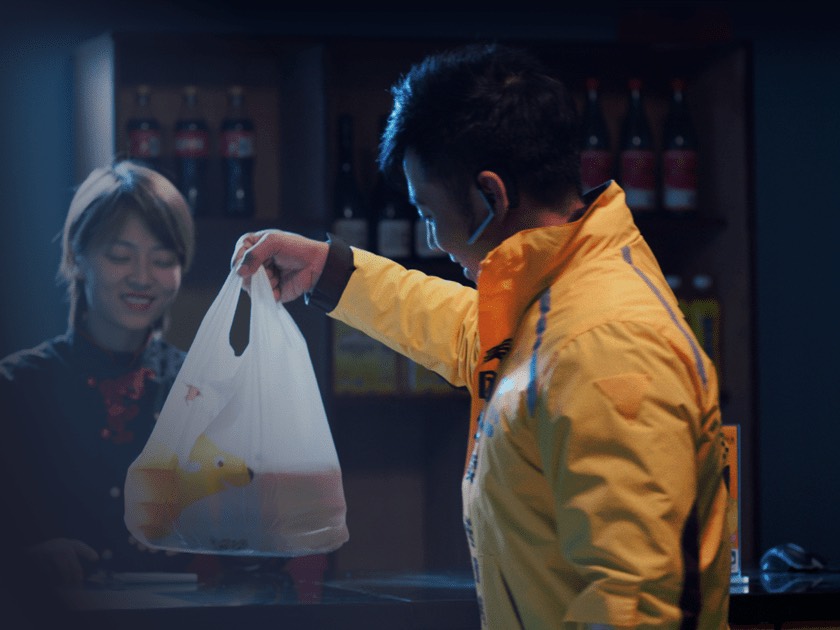 This article is a part of EqualOcean's 'Too Big to Fail 3.0' series. Here, we discuss the challenges facing Meituan-Dianping and the strategies it has tailored to overcome them.

► Meituan has not produced innovations for more than five years. Rather, the company has been successfully borrowing business ideas like food delivery, bike-sharing, ride-hailing, power banks – from Eleme, Mobike, DiDi Chuxing, and Jiedian. It has never invented one such idea by itself. Though touting itself as an ‘Amazon for online business,’ it is yet to launch anything disruptive like Amazon's cloud service AWS.
► Meituan has been telling the story of local service for years and now Alibaba is ramping up efforts to build the next billion-dollar business in the area.
► Meituan's main business is suffering. The commission model that generated 80% of Meituan's revenue has shortcomings as a sustained growth engine as the increase in merchant commissions is subject to market supervision.
► Entering into the SaaS field to grab B-end merchants may form a complete closed-loop for both C-end and B-end customers, as traffic dividends from C-end are gradually drying up. But the SaaS Business in China is a tough job as multiple players are there – for instance, Alibaba's Keruyun.

As of August 6, the market value of Meituan-Dianping (03690:HK) had reached HKD 1.30 trillion, hitting a record high, while other two Internet giants, Alibaba (BABA:NASDAQ, 09988:HK) and Tencent (00700:HK), have a market value of more than HKD 5 trillion. Is it possible for Meituan to reach a trillion-dollar market value?

Meituan generated 55.80% revenue from the food delivery business in 2019, with a commission rate of around 10%-20%. Compared with overseas food delivery peer Uber Eats and Deliveroo's 20%-30% commission rate, the price that Meituan charges is reasonable when considering the average price per order and national disposable income level. As such, any move of rising take rates incurs rancor. During the pandemic situation, when millions of Chinese consumers were not eating outside, Meituan raised the take rate to over 20% in order to take from merchants. It received rectification notices from catering associations requesting Meituan to lower its commissions to normal levels. The rising operating costs of small and medium-sized businesses further added pressure to their cash flows, thus getting Meituan to raise the prices further.

The number of active merchants and active user transaction volume dropped by 100,000 and 10 million during the first quarter of 2020, respectively, which was a warning signal to the sustainability of the track.

The commission for another food delivery giant, Eleme, is lower than that of Meituan, letting it survive under the threats from the strongest player, Meituan. Meituan will not be able to increase the commission to the level that US companies charge in the short term. 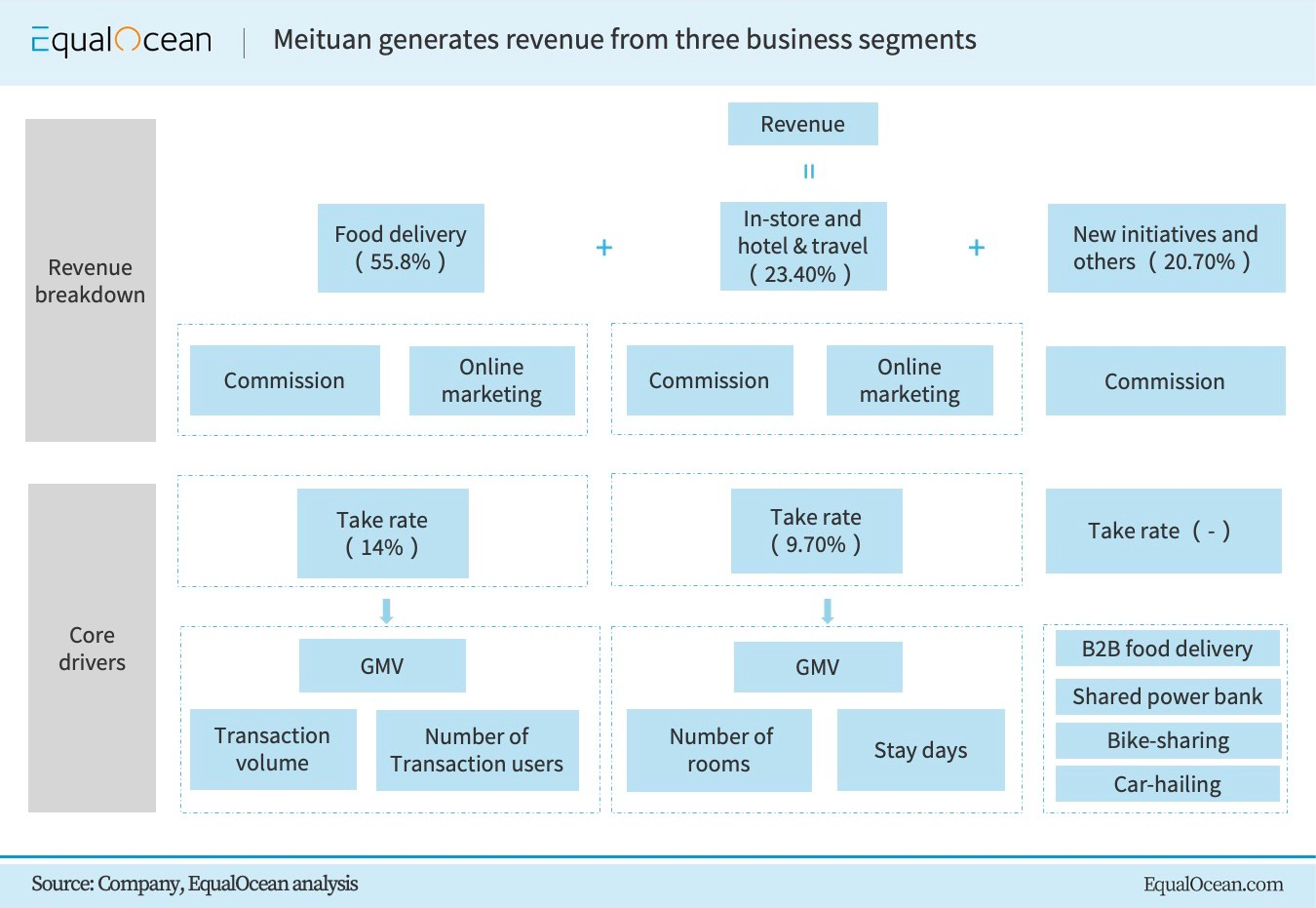 For the other two businesses, Meituan still adopts the method of collecting commissions, accounting for 80% of its revenue. At the same time, it also led to Meituan's loss in the first quarter of 2020 as the catering and the travel businesses were severely affected by the epidemic.

Given that the commission ratio cannot be increased, and other revenue engines are unable to replace the commission model in the short term, Meituan will face a difficulty of sustainable growth in the future if it cannot scale fast. Moreover, as other Internet giants such as Alibaba and Douyin invade into the local life field, Meituan's market share may be divided.

Fortunately, the food business's market size remains strong. The transaction volume of the food delivery industry continued to increase in the past four years, with a compound annual growth rate of 45%, according to Founder Securities. The penetration rate was less than 15% in 2019, implying ample space for continuous growth. 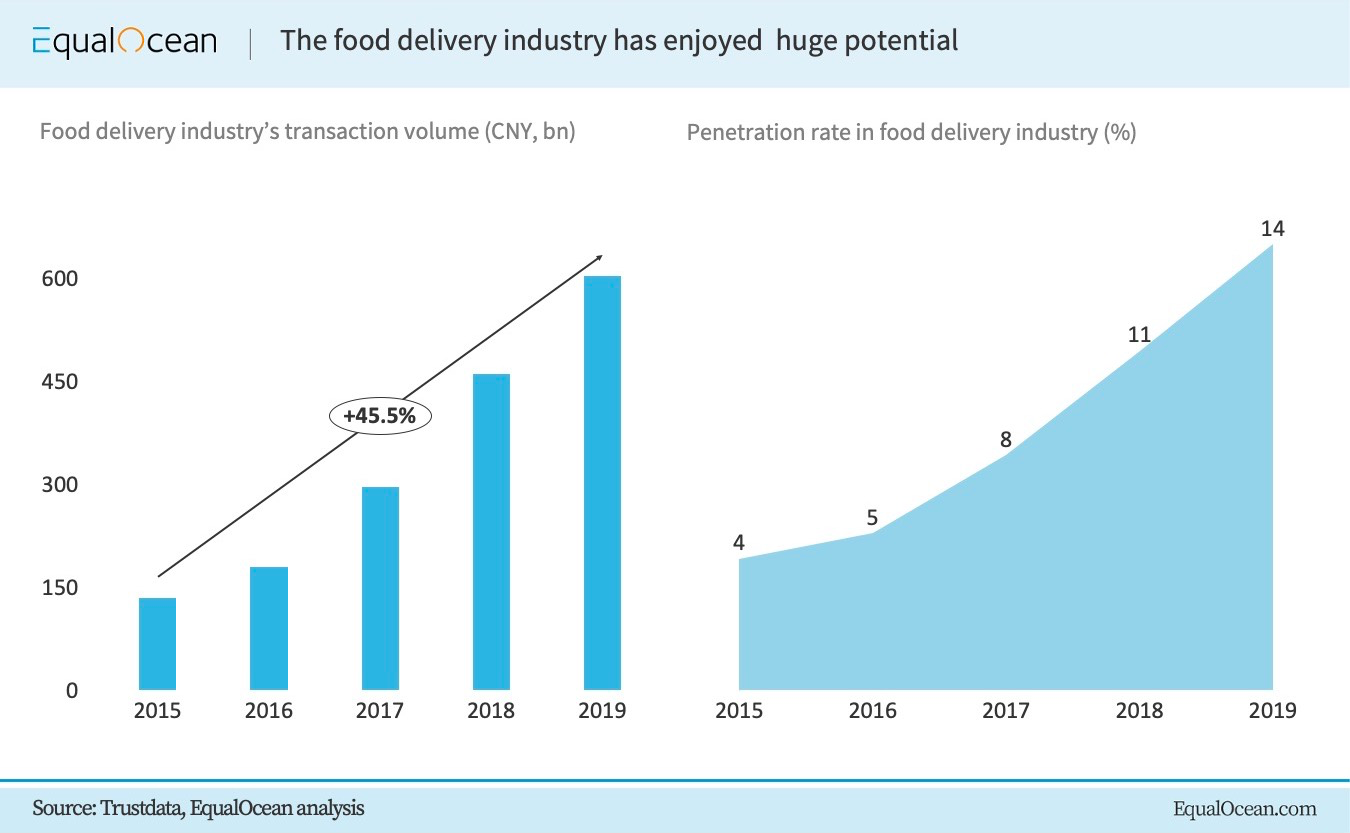 Moreover, Meituan and Eleme have won a market share of more than 90%, and Meituan's food delivery income has remained more than twice that of Eleme in the past two years, with Meituan maintaining the leading position.

Ride-hailing may become the next weapon

In addition to the food delivery business, local life services also come into play – scenarios such as lodging and traveling can be interconnected to create future increments. Meituan's ride-hailing creates a closed-loop for C-end services as most orders are correlated with eating, drinking and entertainment, where Meituan is dominant.

In February 2017, the Meituan App quietly launched the ride-hailing entrance in Nanjing. One year later, it officially landed in Shanghai, seizing the market share through price wars. However, massive subsidies have brought increased costs and losses. The prospectus issued by Meituan shows that the cost of its online ride-hailing drivers has grown exponentially, from CNY 290 million in 2017 to 4.46 CNY billion in 2018, so Meituan shut this business for almost one year.

In April 2019, Meituan restarted its ride-hailing business, connecting with travel service providers such as CaoCao Travel and Shouqi Taxi. Differently, this internet giant is no longer operating on its own, but has turned into an aggregation platform.

The aggregation platform brings benefits for Meituan. As the market has strengthened regulation, it has become extremely uncertain for new players to obtain licenses. Although Meituan has already landed in 54 cities, it only got license plates in 6 cities in 2019. The aggregation platform can quickly cover the market through third-party suppliers.

"Among the orders in ride-hailing, 40% are related to entertainment scenes such as eating, drinking and playing," said Wang Xing, the founder and CEO of Meituan. This confirms the synergy between ride-hailing and catering, in-store and travel. 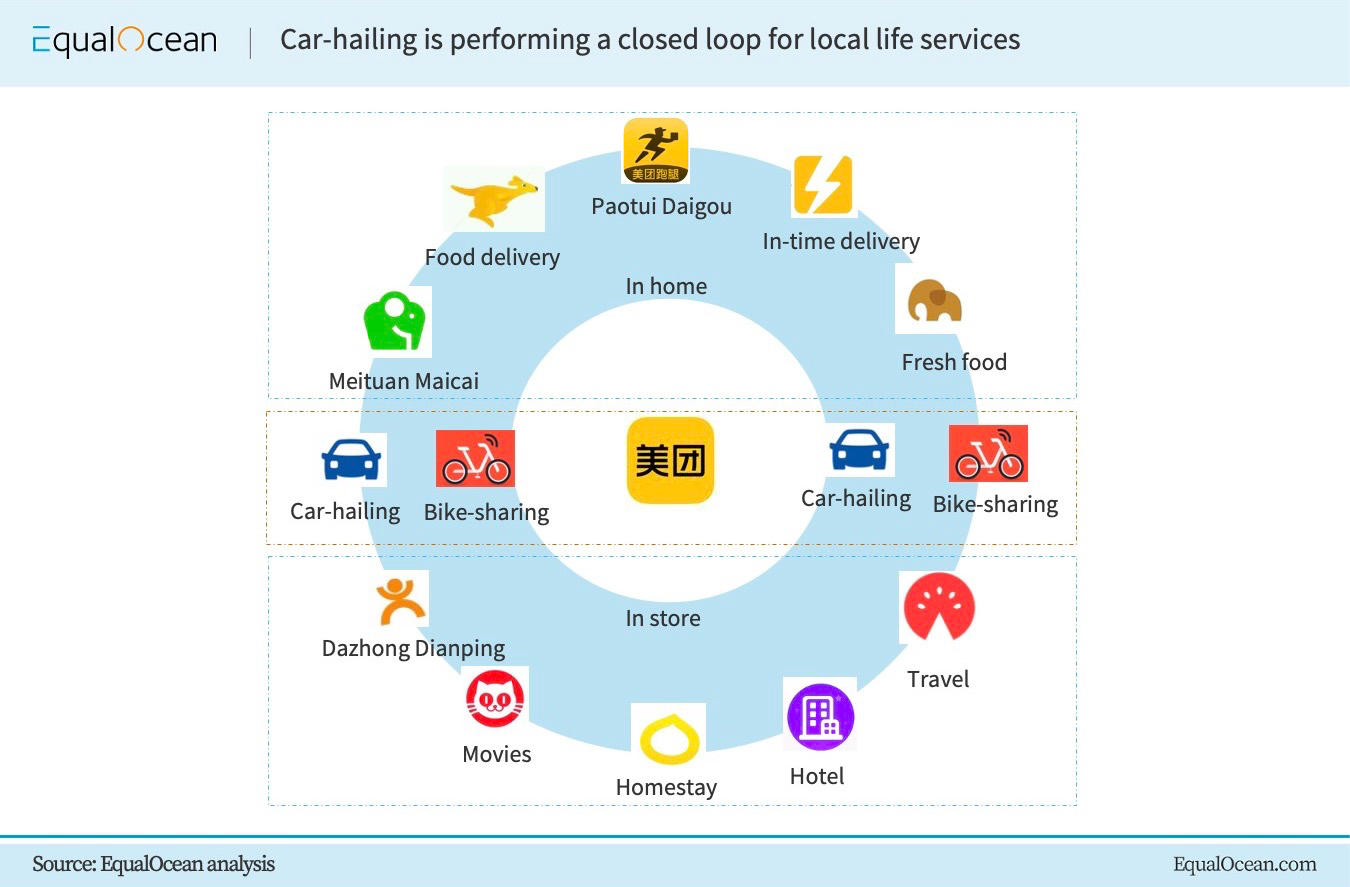 Besides, there was a rumor about Meituan's acquisition of DiDi. Although both sides denied it, it may be a win-win option. DiDi may improve on its current losses, while Meituan can leverage DiDi's leading position in the ride-hailing market to add a new traffic entrance and take advantage of autonomous driving.

Autonomous driving may be an essential part of Meituan's new story. Meituan is trying to invade the core business of Alibaba, the e-commerce field. Further progress has also been made in group meals and unmanned delivery. The self-driving will reduce the delivery cost to a shallow level. The rider's income is now about CNY 4 to 5 per order, but the cost may be reduced to 1 to 2 cents through an autonomous driving fleet.

B-end merchants are becoming the next traffic entrance

As the C-end traffic dividend dries up, Meituan is also trying to extend its arm to B-end merchants. The core lies in the digital upgrade around merchants as around 80% of revenue is generated from food delivery business and in-store and hotel & travel business.

At the same time, Meituan Yuefu (美团月付) deals with a payment issue, and Meituan Peisong 美团配送) finishes order distribution. In 2020, Meituan also launched a recruitment service and Meituan University to solve the problem of employment on the merchant side. It is Meituan's long-term strategy to achieve a fully closed loop at the B and C ends.

The trillion-dollar market value of the major giants partially comes from the businesses that they break through their boundaries to develop or become future trends, such as e-commerce giants Alibaba and Amazon, and social giant Tencent. Cloud services is one field that is attracting most players' attention.

Cloud services are the future development direction from any angle, but Meituan's cloud services terminated operations in 2020. Meituan's offline catering O2O model serves small offline stores, which have very few connections to the cloud, making it challenging to initiate transactions. However, Alibaba is mainly engaged in e-commerce and Tencent primarily focused on games, forming a natural cloud advantage from the client's perspective.

In this way, Meituan lacks a pre-prepared business as a future growth engine, compared with Alibaba, Tencent and Amazon's cloud services.

Also, Meituan does not have Ali's innovations in the business model, organization and management, and data drive, the advantages of Tencent's social full-time traffic model, and the technical capabilities of ByteDance. Meituan is following in the footsteps of Internet giants through investment and acquisitions, such as the acquisition of Mobike, and it isn't easy to leap in innovation.

Recently, Meituan's founder, Wang Xing, has made Meituan a hit by criticizing WeChat payments. However, just showing off through radical remarks and following the giants is not a long-term solution. If Meituan cannot continue to increase its revenue and profits through its existing business, and it does not innovate new growth engines on time, it will still be far away from Alibaba, Tencent and Bytedance.

Meituan has been telling the story of local services for years and now Alibaba is ramping up efforts to build the next billion-dollar business in the area. Renaming its financial division Ant Financial to Ant Group reiterates the ambition, signaling the service of Alipay will emphasize beyond payment but to food delivery (Eleme), restaurant coupon (Koubei), hotel, movie. The defense against intrusion from Alibaba will eat out Meituan's margins, which took years to rise.