Nanyang Topsec is Focusing on Network Security to Improve Profitability

COVID-19 negatively affected Nanyang Topsec’s operating income in the first half of 2020. However, as it is gradually shifting its emphasis to network security, its gross profit rates rebounded to 62.52% at the same time. 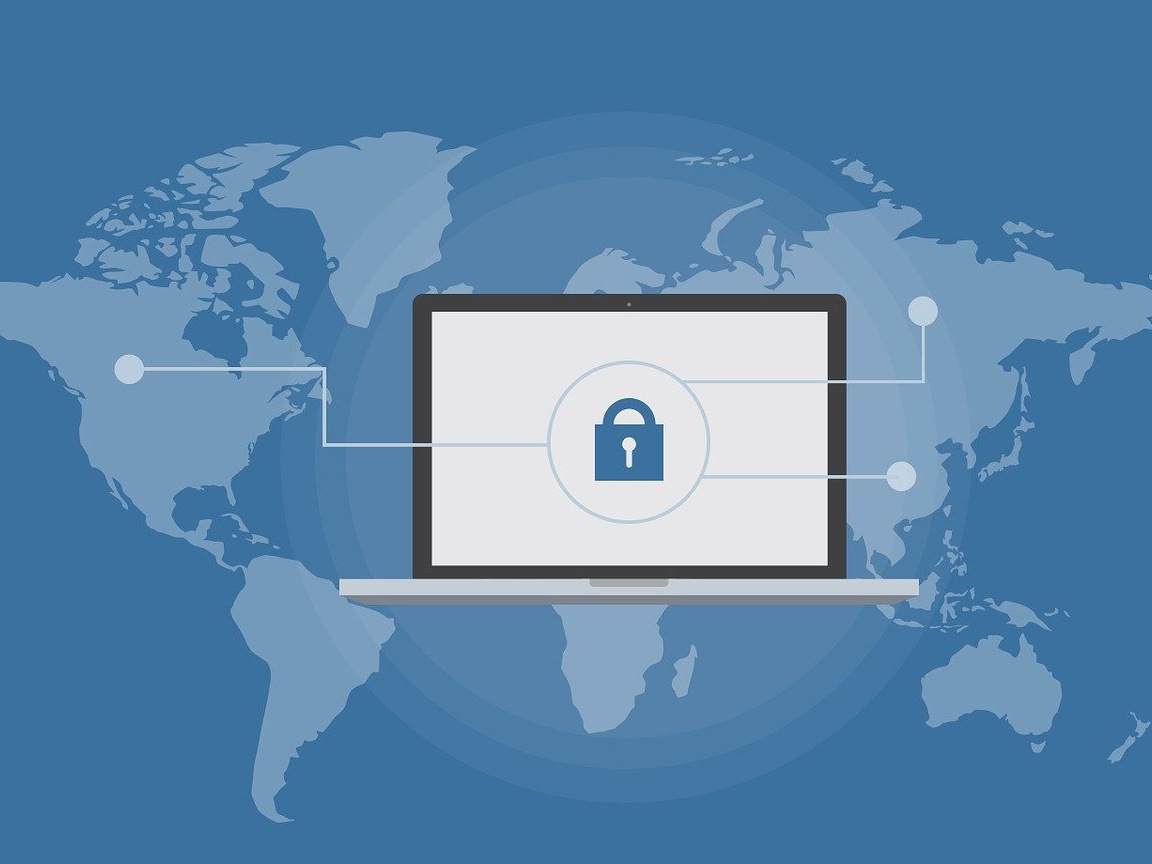 ► Giving up the cable and wire business might have an impact on the firm’s operating income, but will have limited influence on its level of profit.

► Thanks to rising internet penetration rates and more regulations to improve the network security, its market size is supposed to growth more swiftly.

According to Nanyang Topsec, it is stripping its wire and cable businesses to focus on the network security industry. On August 21st 2020, the firm paid 51% for share transfer, and its final version of the annual report will not include the electric wire businesses this year.

Nanyang was set up in 1985, and worked with wire, cable and PVC materials for several years. In 2016 it purchased TOPSEC – an information security provider – in order to enter the network security industry, starting a development pattern along parallel tracks. Having done these two businesses for around four years, Nanyang Topsec plans to give up its initial business – wire and cable – to energetically develop network security. The shift understandably confuses many people.

Why has the erstwhile wire and cable firm put all its eggs into a new, single basket? This may be due to wire and cable market shortages and the network security industry’s – and Topsec’s – better development prospects. The wire and cable market is one of the largest supporting material subsectors in the national economy, being mainly utilized in electrical power, data transmission and machine equipment systems. Under the support of China's thirteenth Five-Year Plan, the wire and cable industry's sales revenues show a rising trend, but there were massive fluctuations in interest rates. This might result from decreasing outputs in the wire and cable market, as products are approaching high-end fields and there is a fall in power engineering's investments. Although the wire and cable industry's demand scale is expected to reach CNY 1.90 trillion by 2024, increasing about 27.55% between 2019 and 2024, its two main issues in rising costs and overcapacity cannot be ignored. Firstly, its upstream raw materials' prices fluctuate a lot – this includes categories such as steel, which requires firms to be effective with cost control. Because of this situation, Nanyang Topsec's net profits decreased by 21.45% to merely CNY 0.05 billion in 2017. Secondly, massively repeated construction resulted in overcapacity, and the equipment utilization ratio was lower than 40% recently. For instance, the capacity of the wire and cable industry was about 700 hundred meters at the end of 2018, but the output was merely 420 hundred meters, indicating severe over-capacity. 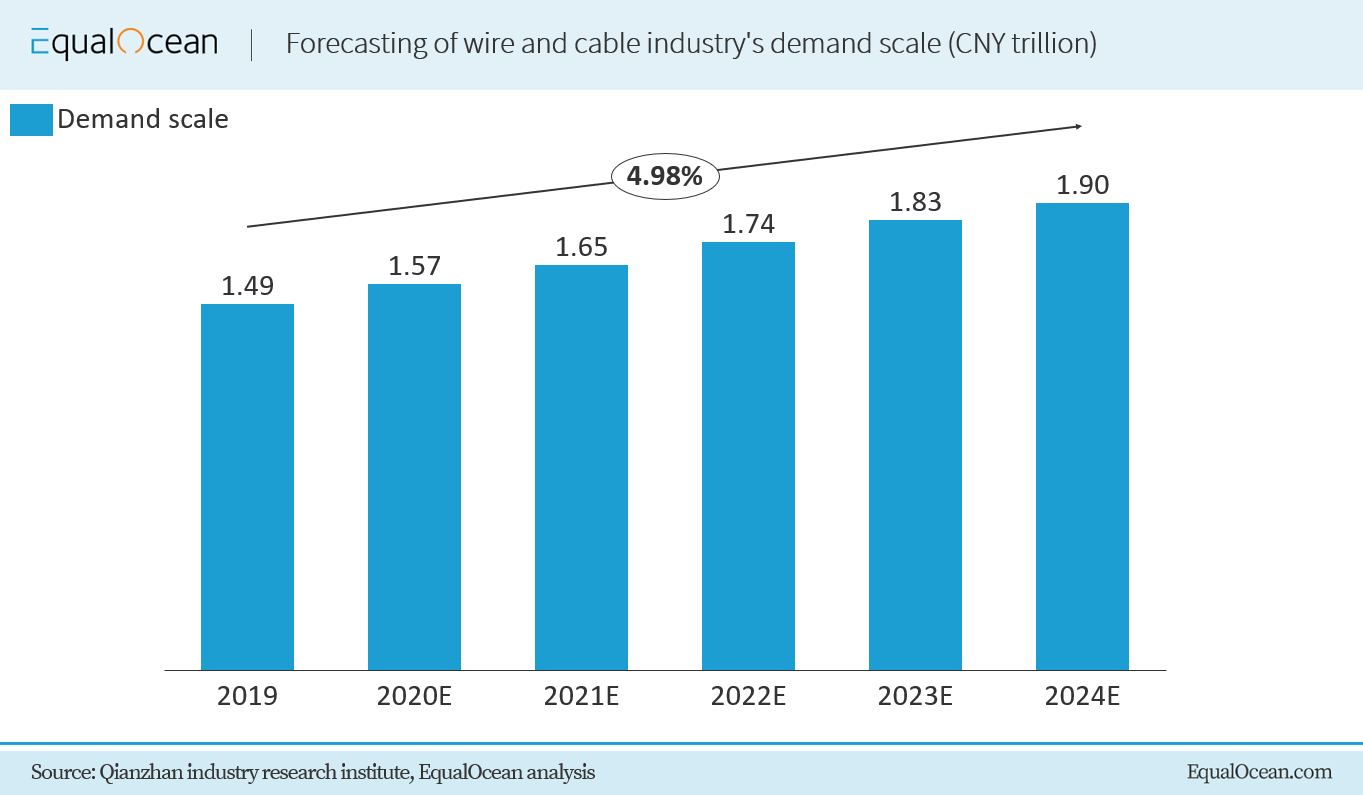 Regarding TOPSEC, it is a famous brand in China’s network security industry, and was awarded as China’s leading top 50 big data firm in 2018. Since its creation, the firm has been providing big data products and security services to governments, troops, educations, transportation and operators. Specifically, TOPSEC occupies a leading position in network security’s niche industries. Hardware firewalls could be regarded as an example; the firm was ranked top in this field with 22.4% market occupancy. Moreover, it is the first firm to apply big data into the network security area, forming a platform to include big data collection, storage and modeling analysis. Hence, TOPSEC’s development potential has attracted many investors’ attention, involving Nanyang. 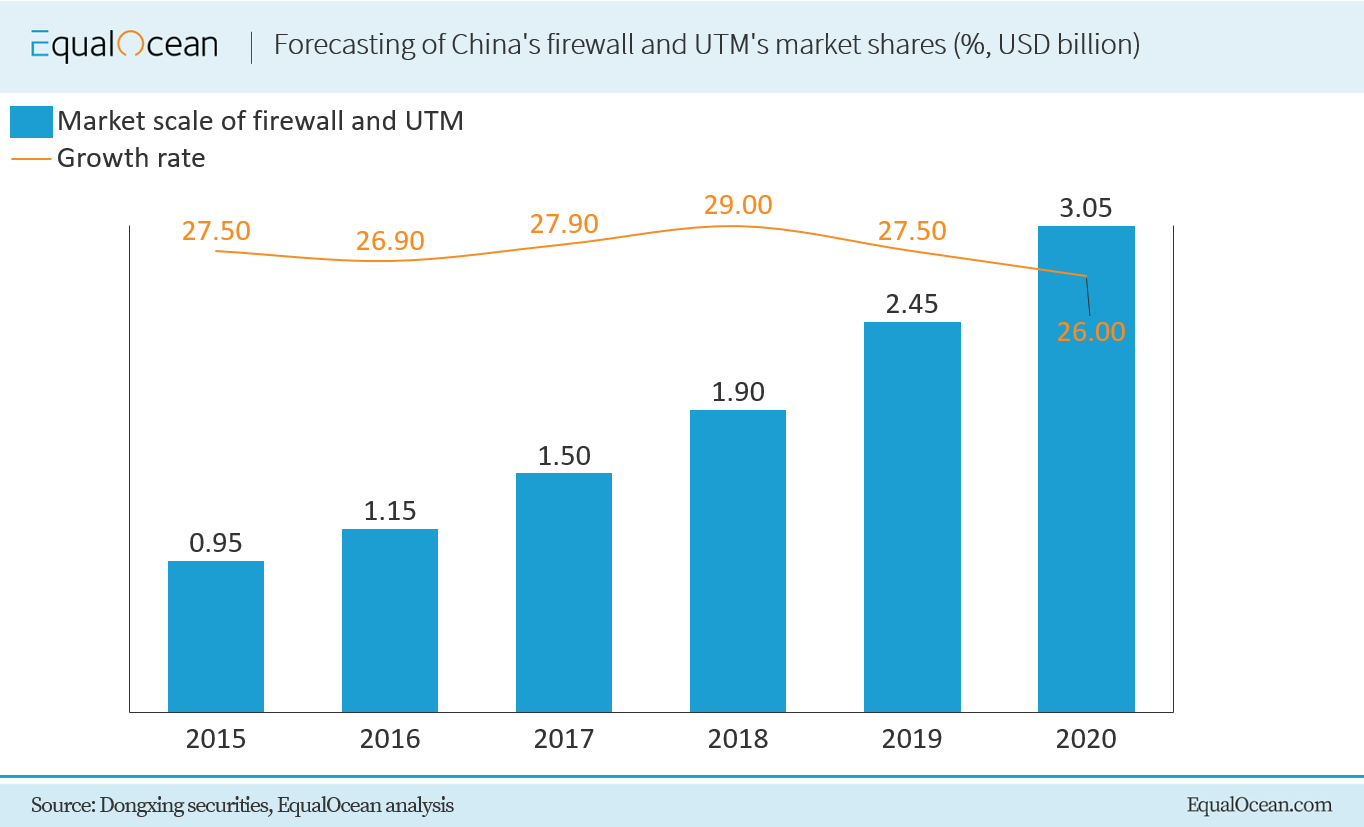 In terms of network security laws and regulations, they have been intensively announced in China between 2010 till now. With the development of the Internet and digitalization, there are many network security problems such as hackers. China is therefore treating network security as a national security issue to promote information security industry growth. In 2016, The Cybersecurity Law of the People's Republic of China was the sign of network security's beginning in a hierarchical protection system, ensuring laws to go by. 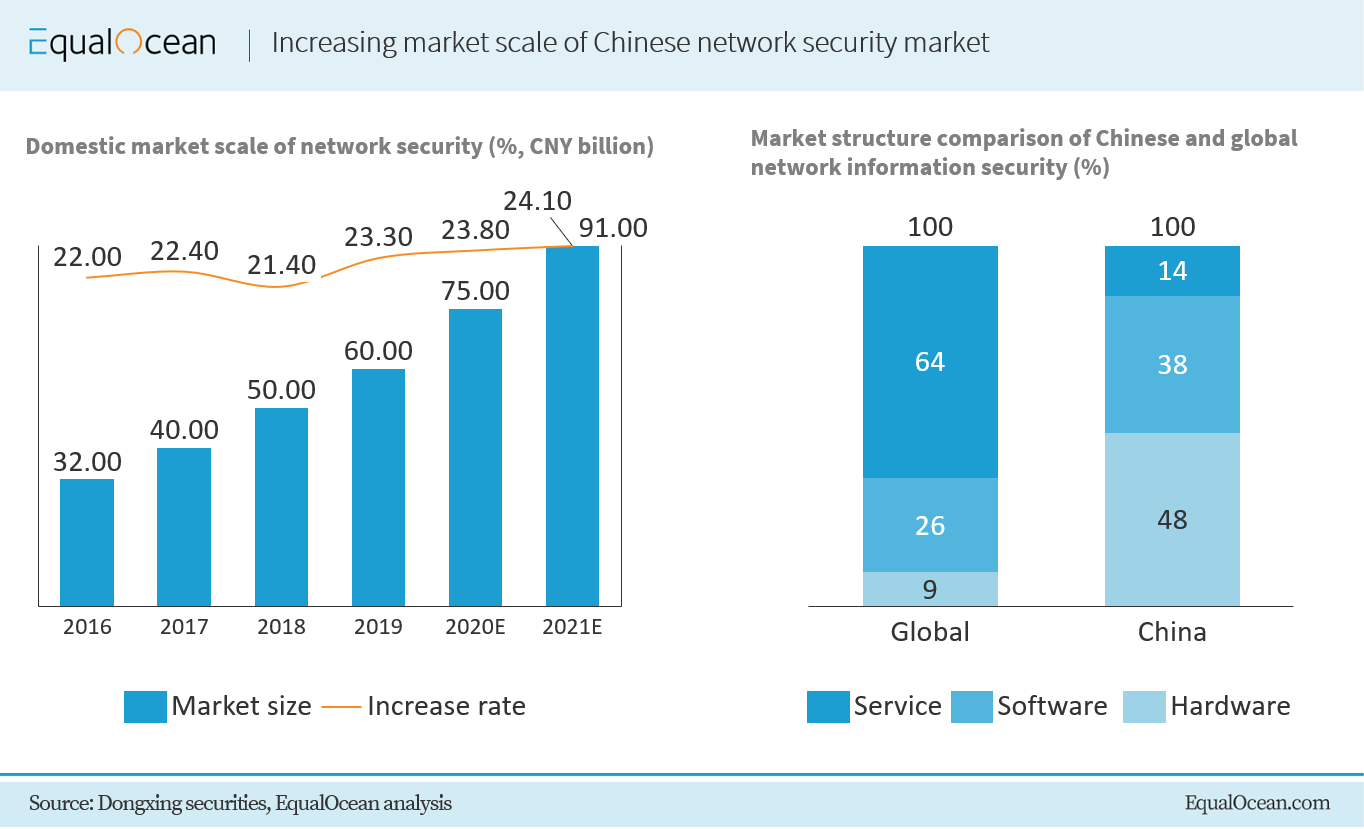 Although wires and cables were Nanyang Topsec's main businesses in the last few years, it has been in a transition process, from a rapid growth period to a slow growth period. According to its annual report in 2019, its output was hard to improve and led to a low-profit situation because of wire and cable's weak technologies. From another perspective, even if wire and cable's operating incomes nearly doubled that of network security in the last three years, network security's gross profit rates were 3.8 times higher than the wire and cable industry. Furthermore, the ratio of network security's operating income was 17% and the percentage of costs was merely 7.78% in the first half of 2020, indicating its potential profitability. 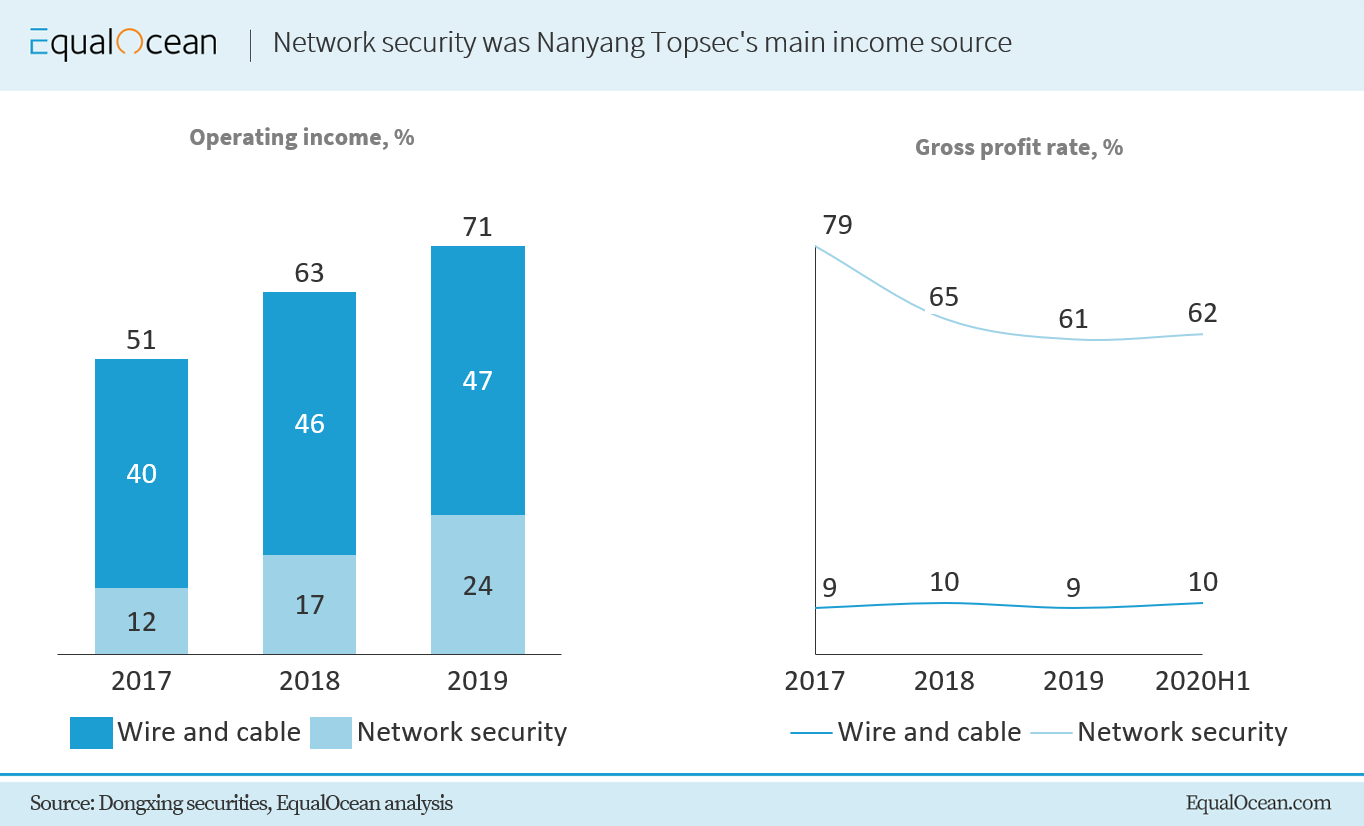 All in all, Nanyang Topsec’s business transformation is based on its judgment of future trends. While the wire and cable industry show a rising demand scale, the higher costs of steel and overcapacity will harm its profitability. On the contrary, the network security industry is growing up quickly these years, benefitting from national policies and digital development. Additionally, the firm’s profits mainly came from network security, and it is expected to make more contributions in the future. But meanwhile, it will also face the risk of goodwill impairments, meaning current assets will bring lower economic interests than anticipated. Will Nanyang Topsec’s transition be successful? It remains to be seen.