One of the three largest airlines in China is facing many challenges, both internally and externally. 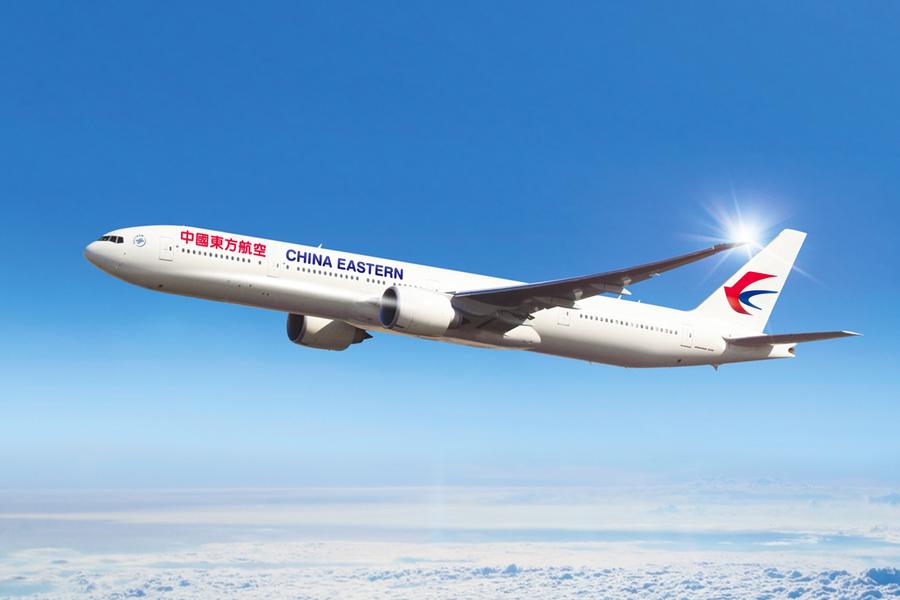 Due to the natural reduction of traffic and control measures during the COVID-19 pandemic, more than 60% of aircraft have been grounded worldwide. With successful epidemic control, China's aviation market is looking forward to perhaps the quickest recovery in the world. According to the Civil Aviation Administration of China (CAAC) statistics, in October 2020 China's passenger load factor reached a peak at 50.3%, which is very close to the level of December 2019. It seems that China's aviation market has recovered to normal levels. 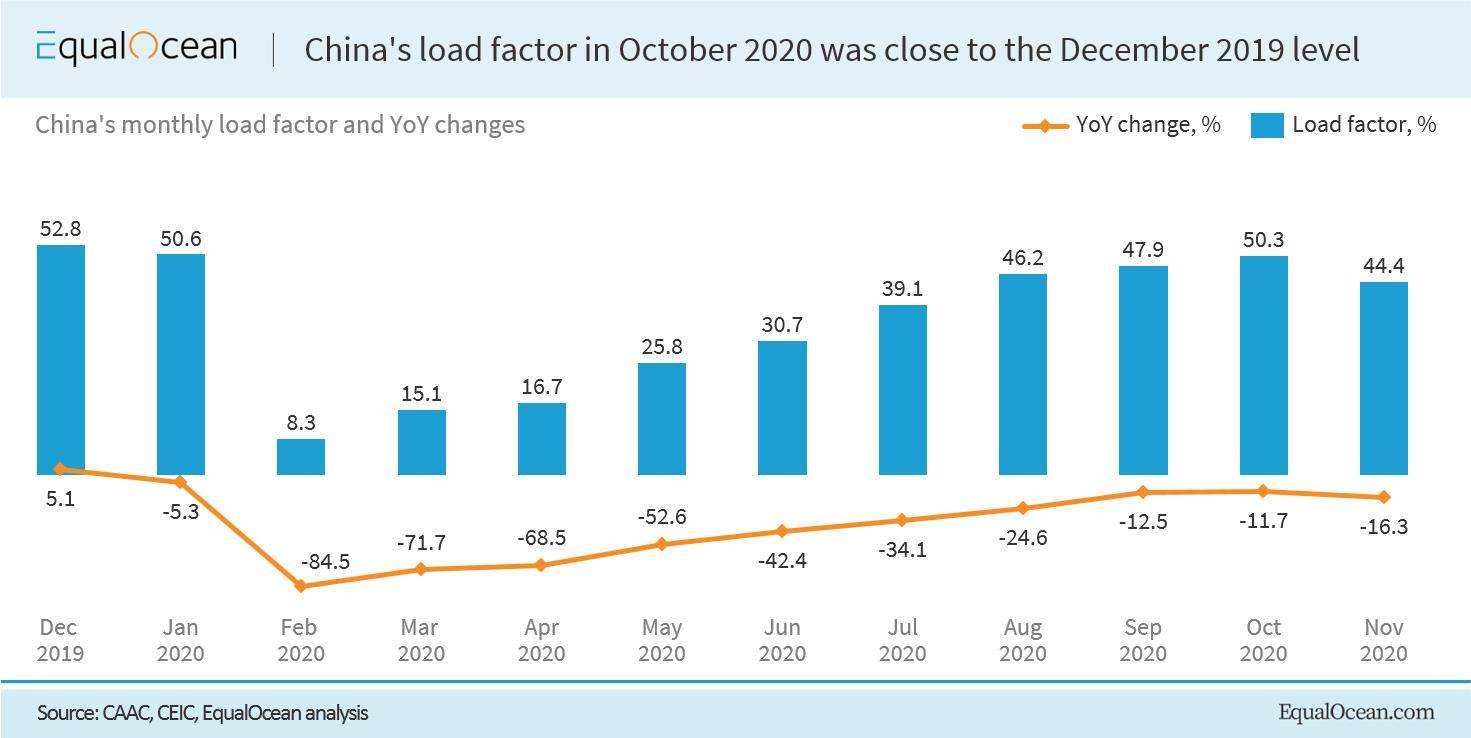 It is worth noting that the figure decreased in November due to frequently imported infection cases. This made the probability of complete recovery decrease slightly. Moreover, due to the traffic control policies of various countries, in November 2020, the international flights of China's major airlines still accounted for less than 10% of the 2019 level. This situation is expected to continue at least until the first quarter of 2021. However, the recovery speed of China's aviation industry is and will likely remain the fastest in the world. As an industry leader, China Eastern Airlines presents a great deal of research interest.

China Eastern Airlines, headquartered in Shanghai, is one of the three largest airlines in China. As of the third quarter of 2020, the company owned CNY 283.6 billion in total assets and had more than 80,000 employees. The company operates a network of 1,150 destinations in 175 countries worldwide, with an annual passenger traffic volume of more than 130 million (2019). Moreover, the company is also the first Chinese airline to triple-list in Hong Kong (0670:HK), New York (CEA: NYSE), and Shanghai (600115:SH).

Compared to its competitors, the company has several significant advantages. First of all, it is the only one of the three largest state-owned airlines to be headquartered in Shanghai. As the economic center and international shipping center of China, 80% of China's large cities, 90% of the population, and 93% of its GDP are within the two-hour-flight radius of Shanghai. In 2018, China Eastern Airlines took 47.6% of Shanghai's aviation market share, ranking first in China. Second, its fleet is relatively young. Frequently introducing new aircraft and eliminating old planes, the company currently owns 732 passenger aircraft with an average age of 6.7 years. Among China's major airlines, it is the youngest. A younger fleet represents better aircraft hardware and a higher safety level. Third, the company has high customer loyalty. By the end of June 2020, the company had a membership of more than 43.76 million, up 6.5% year-over-year, which is second only to Air China in the country's aviation market.

Slow recovery from the COVID-19 crisis 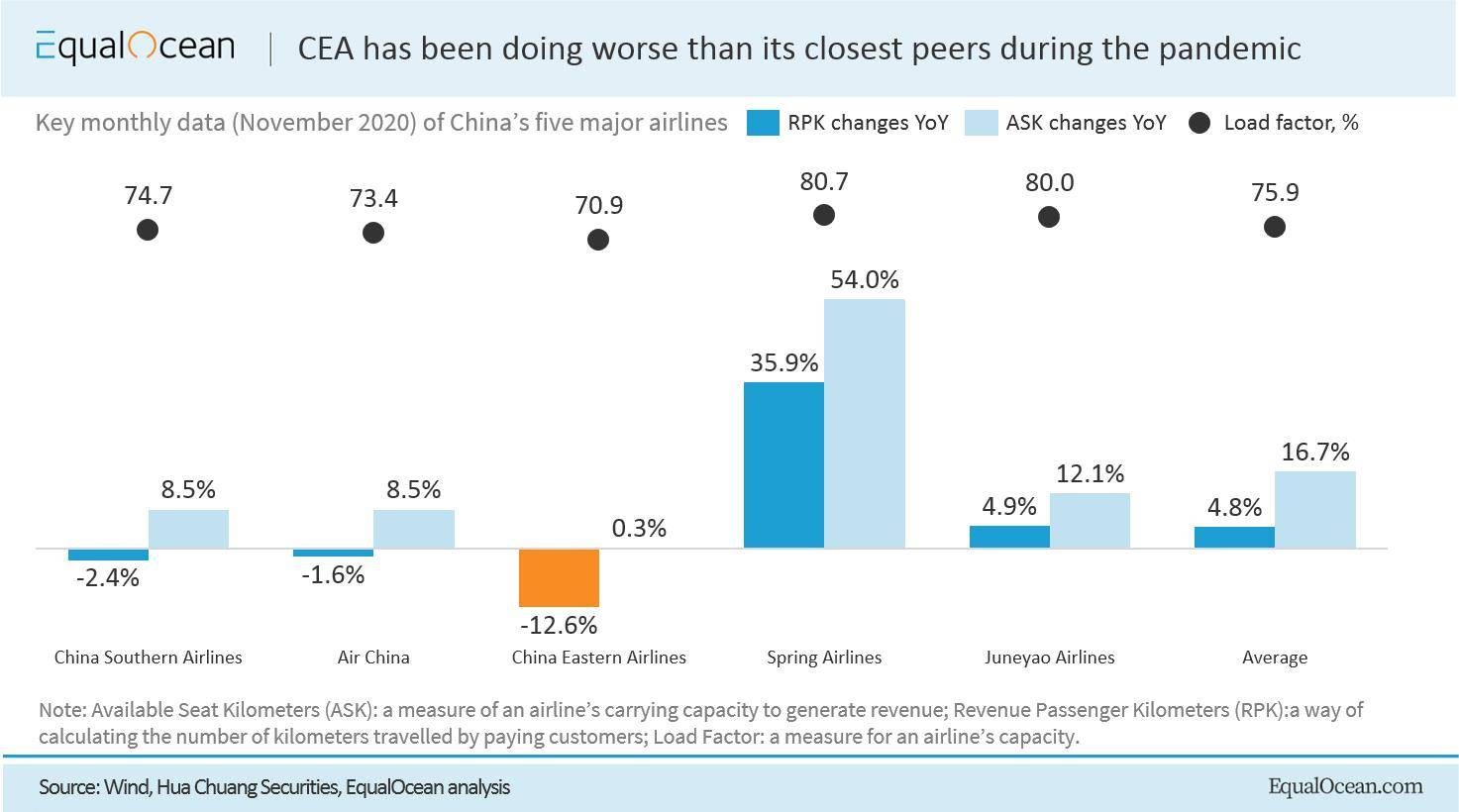 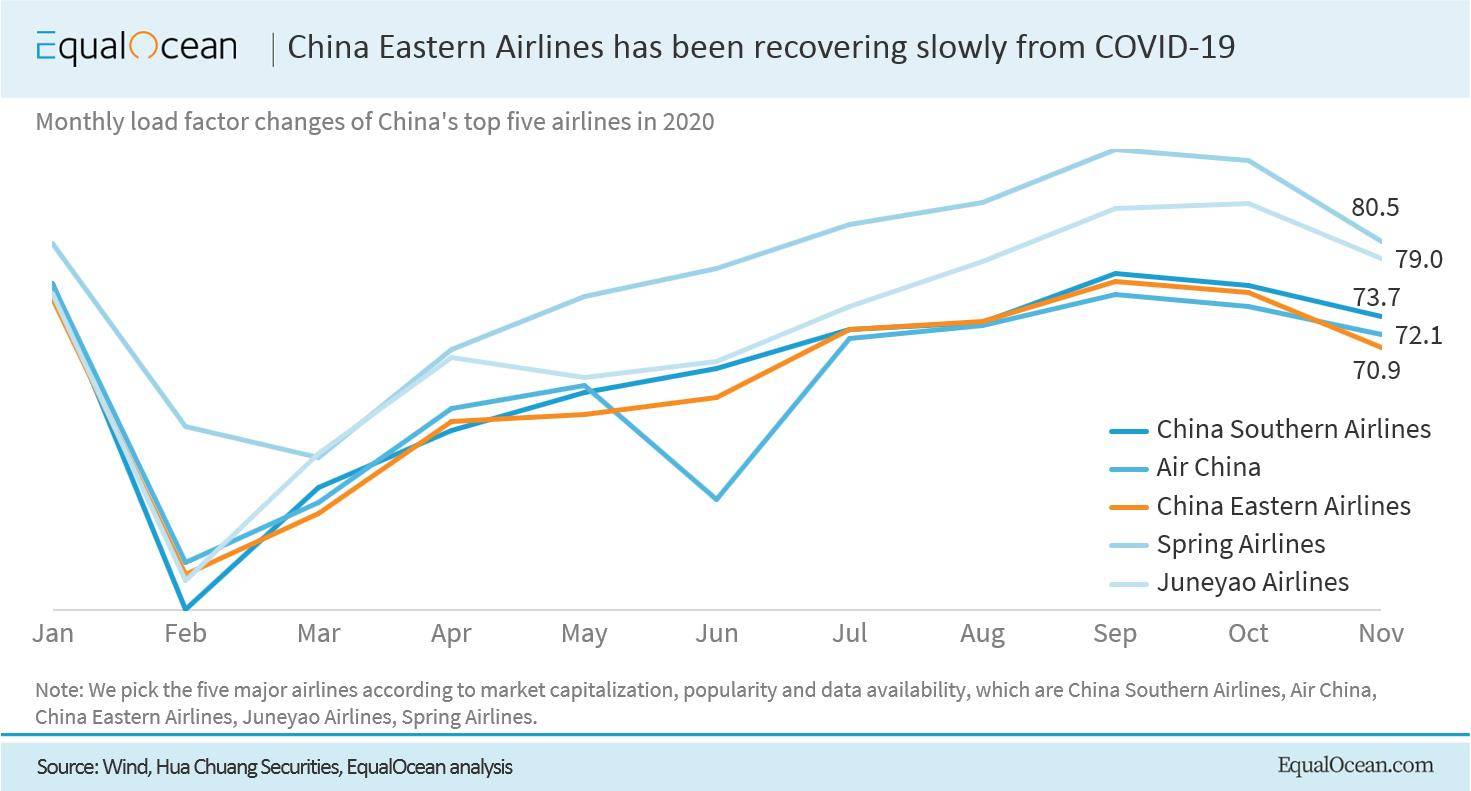 China's low-cost airlines, such as Spring Airlines, are recovering faster. This may change China's aviation industry's pattern from the domination of the state-owned triumvirate to a more competitive market model. In the new situation, China Eastern needs to utilize its advantages to consolidate its market position.

China Eastern Airlines company reduces its losses in the third quarter of 2020. From January to September, the company realized CNY 42.3 billion in revenue, down 54.7% year-on-year, and a net loss of CNY 9.1 billion. In the single third quarter of 2020, the company’s net loss reached CNY 560 million, CNY 4.04 billion less than the second quarter. The company realized CNY 14.80 billion ASK and 10.50 billion RPK in November, 95% contributed by domestic flights. The load factor remained above 70%. 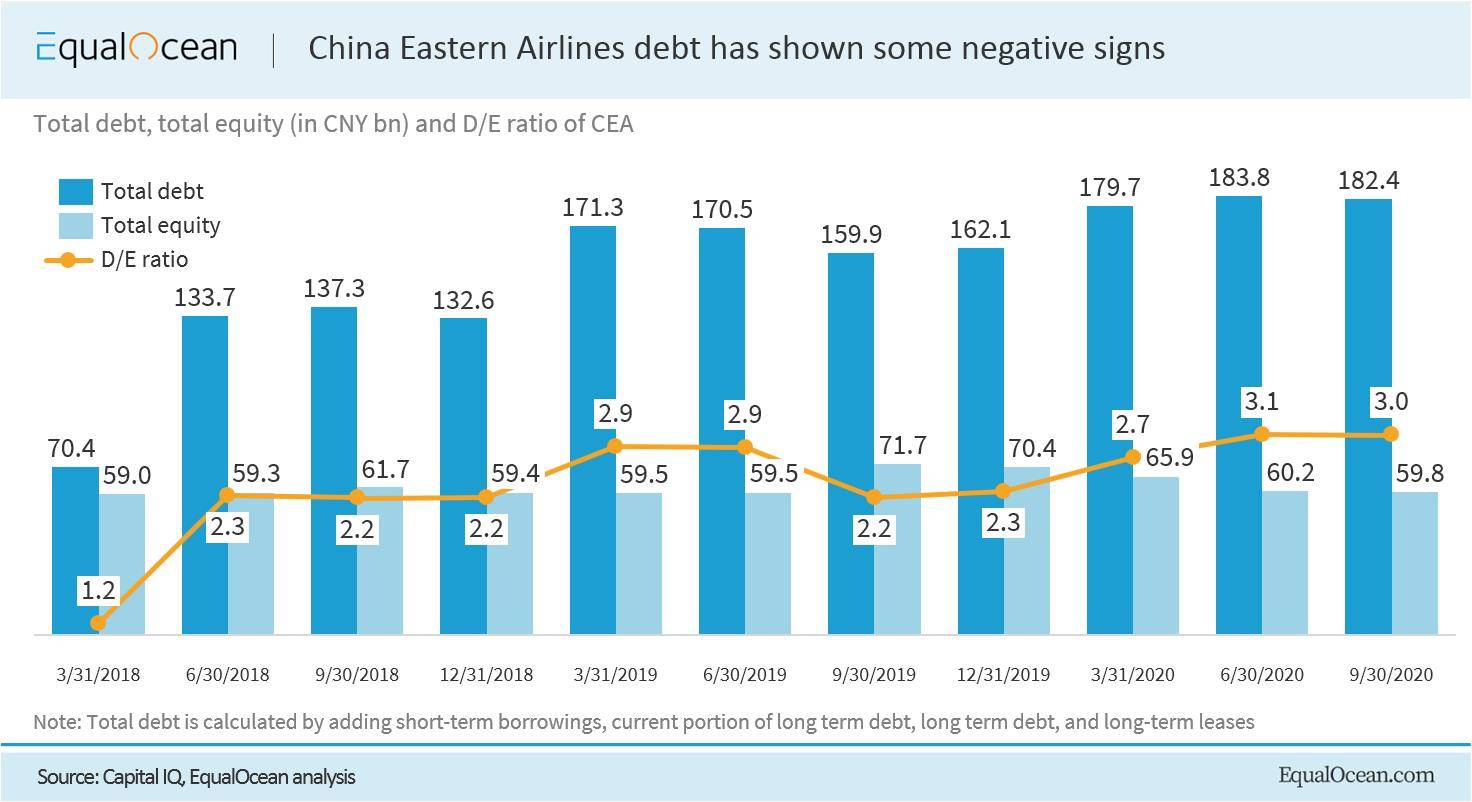 The company has accelerated the pace of financing in 2020. In the first half of 2020, it issued 24 super short-term commercial papers (SCPs) and one corporate bond, raising CNY 51.7 billion. As of September 30, 2020, its total debt had reached CNY 182.4 billion. CEA's D/E ratio has surpassed 3.0, and this ratio was only 1.2 at the beginning of 2018. Notably, according to the company's announcement, it plans to introduce 43 new and retire eight aircraft in 2021, which may affect interest payments next year, and further affect cash flow.

On the whole, although CEA's operating conditions improved in the third quarter, the current debt level and the rising cost rate may create some pressure for the next two quarters' financials. The company's stock has been trading high in 2020, and we don't think it is a good time to long it.

China plans to vaccinate 50 million people before the Spring Festival 2020. Whether this goal can be achieved or not, this level is still difficult to meet the requirements of mass immunization, which means that there is always the possibility of a resurgence in China. Moreover, several mutant COVID-19 strains have set off another alarm, making a recovery from the pandemic highly uncertain. [Risk: High]

The challenges brought by COVID-19 are estimated to be another critical risk for China Eastern Airlines, considering that the low-cost airlines' recovery speed has been faster than that of the three largest players. [Risk: Medium]

According to the data from the company's 2019 annual report, its cost will rise by about CNY 1.71 billion if the average price of aviation fuel increases by 5%. Besides, the exchange rate has an impact on the company's net profit. If the Chinese Yuan depreciates by 1%, the net profit will decrease by CNY 318 million. The company uses aviation fuel hedging products and optimizes the company's debt currency structure to reduce such risks. [Risk: Low]