Even though AWS and Azure dominate the global public cloud services market, they are laggards in China, where Alibaba and Tencent are calling the shots. 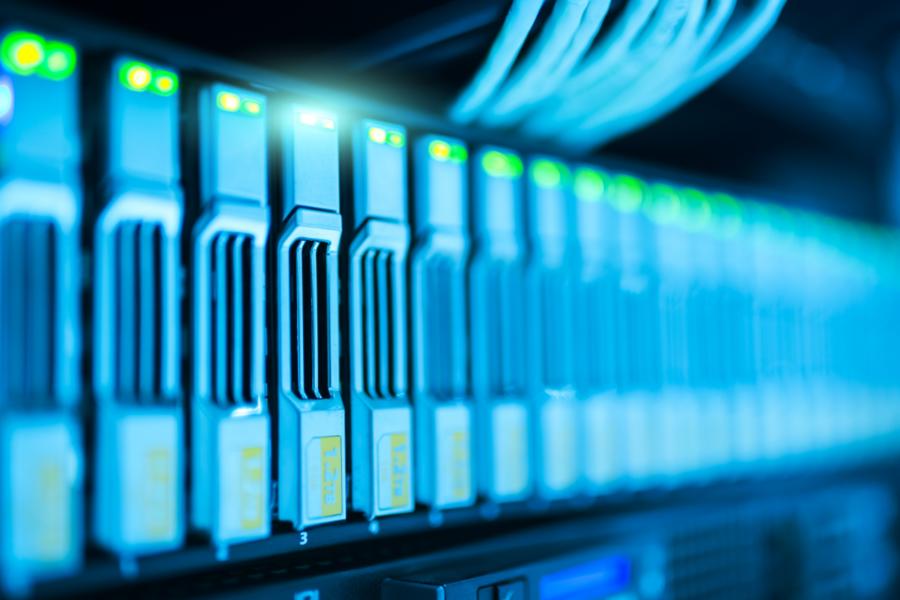 The world had never moved at such a speed to integrate with digitalization until the pandemic started, pushing everything to convert to a virtual form. In the past year, China had 85 million more Internet users along with increasing online activities. To adapt to the new circumstances in this digital-driven period, the Chinese cloud service industry has grown with momentum. Internet companies are inherently inspired to deploy cloud services. Two Chinese giants, Alibaba and Tencent, concurrently developed their own cloud service businesses: Alibaba Cloud and Tencent Cloud.

A brief review of Alibaba and Tencent's businesses

Not restricted to delving into the e-commerce marketplace, Alibaba has also engaged with a diverse array of businesses in media, fintech, logistics, retailing and other segments. E-commerce, its primary business contributed over 85% of the total revenue in F2020. Meanwhile, Alibaba recorded a GMV of CNY 7.5 trillion on its marketplace platform. 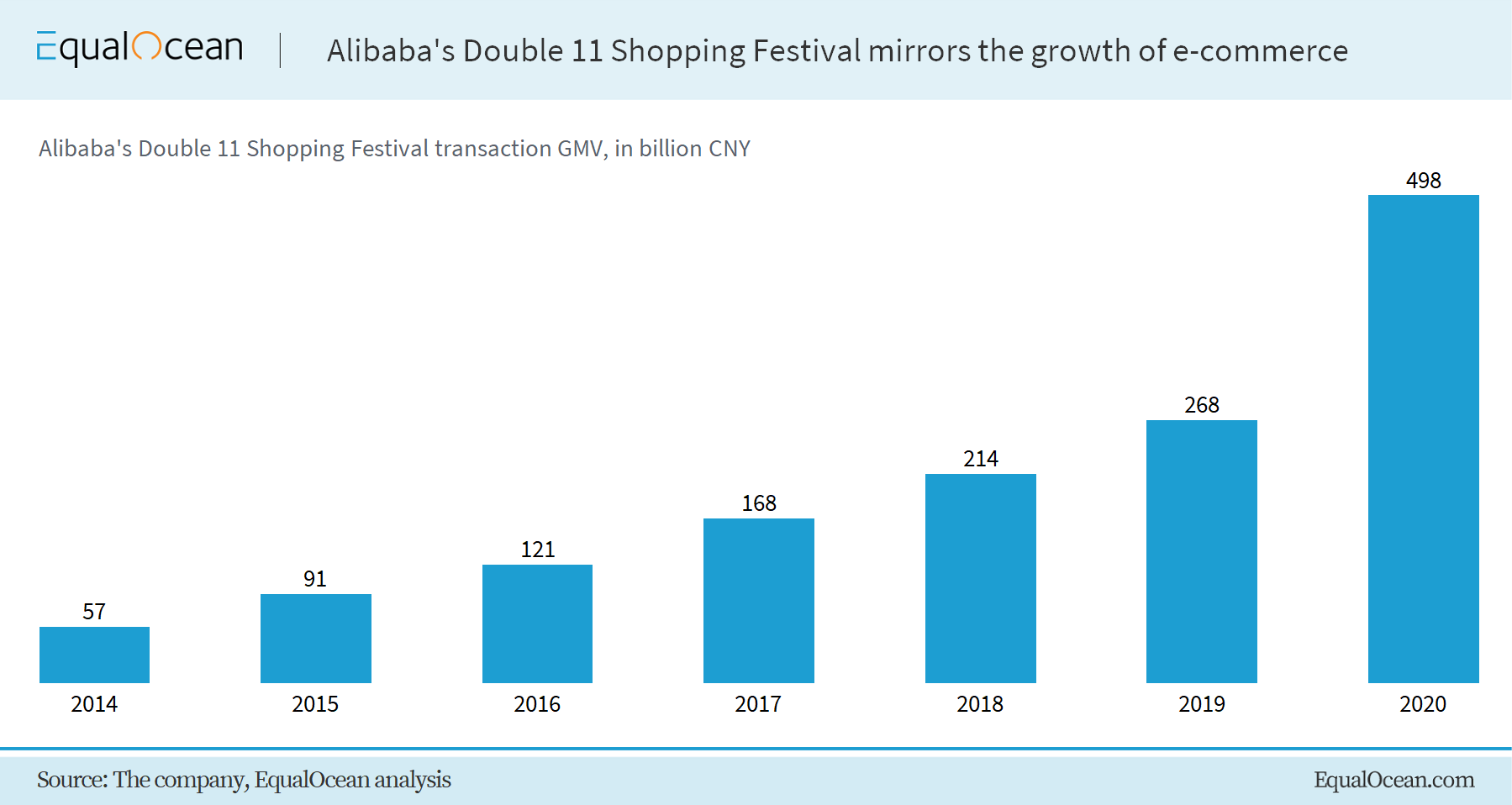 The company broke a new record with its latest shopping festival, 'Double 11': transaction GMV across all the platforms exceeded CNY 492 billion within one day, growing at a 29% rate year-on-year. Such a deal size cannot be reached without Alibaba's functional digital payment, logistic services, cloud computing, and other initiatives. These services collaboratively incubated Alibaba's online economy. It is noteworthy that its fintech division, Ant Group, had been valued at USD 220 billion by Warburg Pincus before it paused its IPO in November 2020. Ant's IPO pause influenced Alibaba's stock market performance instantly, but Alibaba's core business is resilient enough to mitigate the risk.

Impressively, with a steady expansion in Alibaba's business, the company is reaching beyond the national boundary through foreign investments. The company's blueprint rapidly extended to a global e-commerce environment. For example, Alibaba constructed its own global platform AliExpress while invested in regional companies. The e-commerce competition has been getting more intensified after decades of technological development. In China, Alibaba is directly competing with JD.com and Pinduoduo with the first-mover advantage while facing threats from newcomers like ByteDance and Kuaishou.

Now, Alibaba is more than a digital retail platform. Many of its spin-offs benefit from the solid e-commerce foundation at the beginning stage of its business and gradually become revenue pillars. Alibaba Cloud is a strategy-oriented company. With over CNY 10 billion of R&D expenses every year to date, it stated that it would further input CNY 200 billion to develop cloud products and services by the end of 2023.

Tencent started its business by building digital network platforms that have deeply penetrated the modern culture and entertainment spheres. With a market cap of HKD 6 trillion, Tencent has three revenue pillars: gaming, advertising and fintech and business services. The company generated CNY 482 trillion in 2020. Around 55% of the revenue came from gaming, 27% from advertising and 17% from fintech and business services. What makes Tencent outperform other Internet companies in China is its most valuable asset – Internet traffic.

At the beginning of 2021, its messenger-turned-super-app WeChat reached 1.2 billion MAU. The close relationship to the 'C-end' strengthens Tencent's understanding of consumer behaviors and improves its product management. Benefiting from billions of users in instant messaging (IM) apps like QQ and WeChat, Tencent holds a stake in the marketing and gaming industries as a gatekeeper of huge traffic. 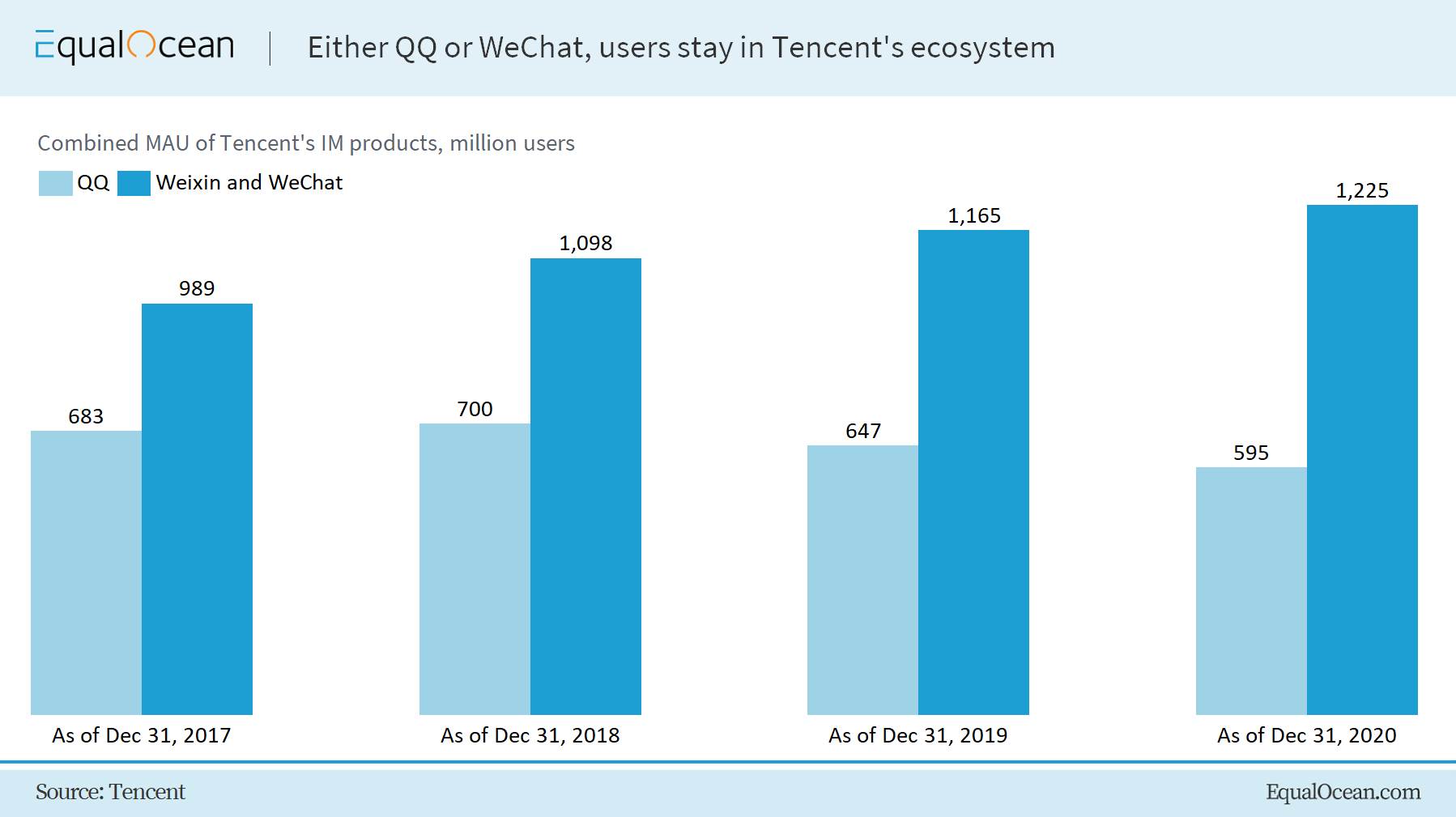 The entertainment segment helps Tencent make profits from C-end users. The company is looking for a new growth point to support the burgeoning to-business market. Tencent finds a balance between C-side and B-side as a connector. Digital marketing has connected consumers and brands while Tencent's cloud services can contribute benefits to more brands. The cloud market is immature and the bar to entry is not affordable for many companies. But Tencent is not a part of one of those incapable enterprises. The cloud company was founded in 2014, or five years later than Alibaba Cloud. The latecomer quickly caught up – Tencent Cloud's market share in China ramped up to No.2 in 1Q 2020. The cloud business has been gaining momentum, especially after the COVID-19 outbreak.

Tech giants and their cloud ambitions

The company has the most complete cloud service and product matrix among all its Chinese peers. With the most public cloud (IaaS and PaaS) market share in Asia, Alibaba Cloud is a cloud toolbox wonderland. One full-stack service demonstrates the company's R&D strengths in the cloud area. The technology strategy is split into three major phases: Cloud IT, Cloud DT – data middle platform and Cloud DT – intelligent business. 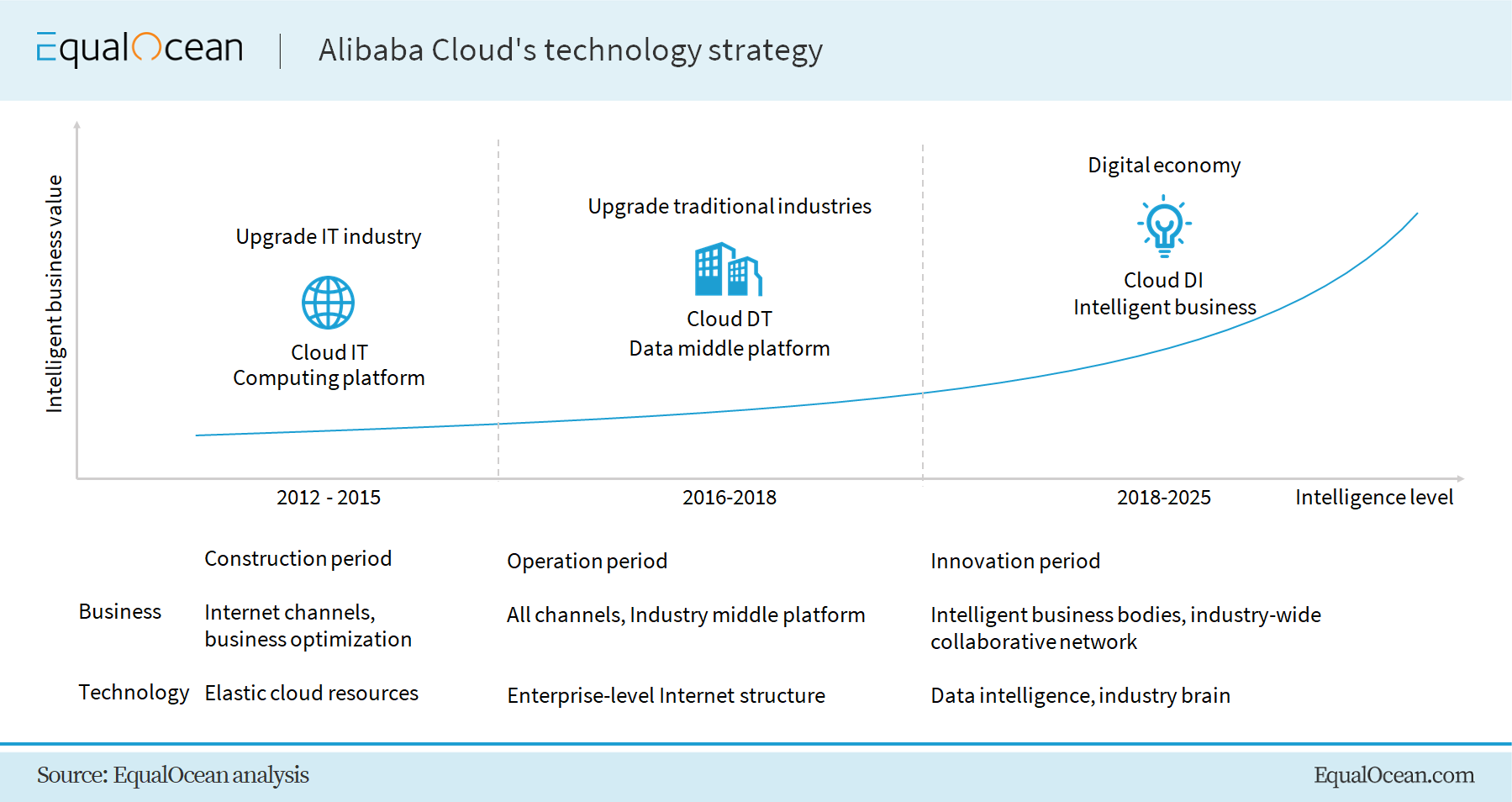 The cloud leader has repetitively emphasized the term 'to be integrated' on IaaS and PaaS services and products. In 2019, the company released the 'SaaS Accelerator' project to help Alibaba ecosystem partners develop and operate SaaS products. On the other hand, Alibaba Cloud does not plan to develop its own SaaS products but only lays a foundation for SaaS development.

Focusing on the infrastructural and universal layers, Alibaba Cloud has cooperated with selected partners to develop vertical public cloud solutions for sectors with varied features and demands like financial service, live streaming and government. The strategy draws a picture of turning more industries into cloud-based on a firm cloud infrastructure. At the end of 2020, SaaS Accelerator cooperated with more than 100 SaaS partners from 30 vectors and developed about 500 cloud solutions.

From the team structure perspective, Alibaba Group announced an important structural change in September 2020. The DingTalk was upgraded to Big DingTalk business unit and directly reported to Alibaba Cloud president Jianfeng Zhang. Alibaba addressed the 'Cloud and DingTalk Unity' strategy (CDTU) at the same time. Prior to the CDTU, the cloud services and DingTalk were relatively independent of each other while the client groups of the two overlapped. The interoperability between the two product systems can be improved after the integration and create values for clients when using Alibaba's enterprise products. In the long run, the strategy will enhance Alibaba's capabilities in serving enterprise clients and improve user stickiness in its ecosystem.

Alibaba reported revenue of CNY 40.016 billion (USD 6.11 billion) from the cloud computing segment in F2020, which was close to AWS' 2015 earnings of USD 7.88 billion. It is worth noting that AWS' operating income was positive USD 1.86 billion in 2015 while Alibaba Cloud's operating loss in F2020 was CNY 7.016 billion (USD 1.07 billion). The depreciation of the revenue of Alibaba Cloud was 22.3% in F2020, but AWS' 2015 figure was 32.7%. Alibaba Cloud has a lower depreciation expense ratio, but the operating profit is still underscored in red. It is undeniable that the company has been scaling fast and hence the control on initial costs and operating expenses may be less emphasized when it concentrates on the market expansion.

Tencent has the largest public cloud (IaaS and PaaS) market share only second to Alibaba in China, seven years after its establishment. Tencent adopted a radical structural change to prepare for cloud competition in 2018. The Cloud and Smart Industry Group (CSIG) was thereby founded as one of the six business groups to reveal the company's ambition in enterprise services. The change also gave enough freedom to CSIG to allocate company resources and develop businesses.

Being different from Alibaba in nature, Tencent's strengths in social network and entertainment products equip it with user measurement while Alibaba's expertise is on enterprises. The cloud business indicates a new chapter, with Tencent marching into the enterprise service area – a focus shifting from serving C-end users to B-end clients. In the meantime, the strategic core of Tencent Cloud is connectivity, linking B-end with C-end via digital transformation to optimize efficiency and improve service quality. The connectivity relies on the cloud ecosystem, a network of cloud services composed by business partners that can finally reach end-users.

Tencent Cloud launched 'Thousand Sails Plan' ('Qianfan Plan' in Chinese), echoing Alibaba Cloud's SaaS Accelerator, to build the SaaS ecosystem. Instead of covering as many industries as possible like Alibaba Cloud plans, Tencent Cloud is less aggressive. Being a connector, the company chose to focus on creating a more open platform enhancing connections among enterprises and users. Selected SaaS companies and Tencent will collaborate on developing ecosystem solutions for different verticals. At the same time, Tencent Cloud also develops SaaS products while Alibaba Cloud explicitly declared that they will not enter the SaaS field.

Tencent's moves to develop the SaaS proves the republication of its C-end product strategies into B-end products. Its success lies upon a foundation of massive user group size and product comprehension.  As an example, Tencent Meeting is a typical SaaS product and has been growing rapidly since the pandemic outbreak. Meanwhile, Tencent Meeting's functions are similar to IM products like WeChat Work, which is a portal for users to access enterprise services. As for vertical solutions, ecosystem SaaS partners take the stake to lead.

Tencent consolidates earnings from the fintech and enterprise services (mainly cloud services) under 'Fintech and Business Services.' Explained by Tencent, the revenue increase in the fourth quarter of 2020 was attributed to cloud services' exceptional performance and the to-B revenue from Biauto, a newly privatized mobility solution company. 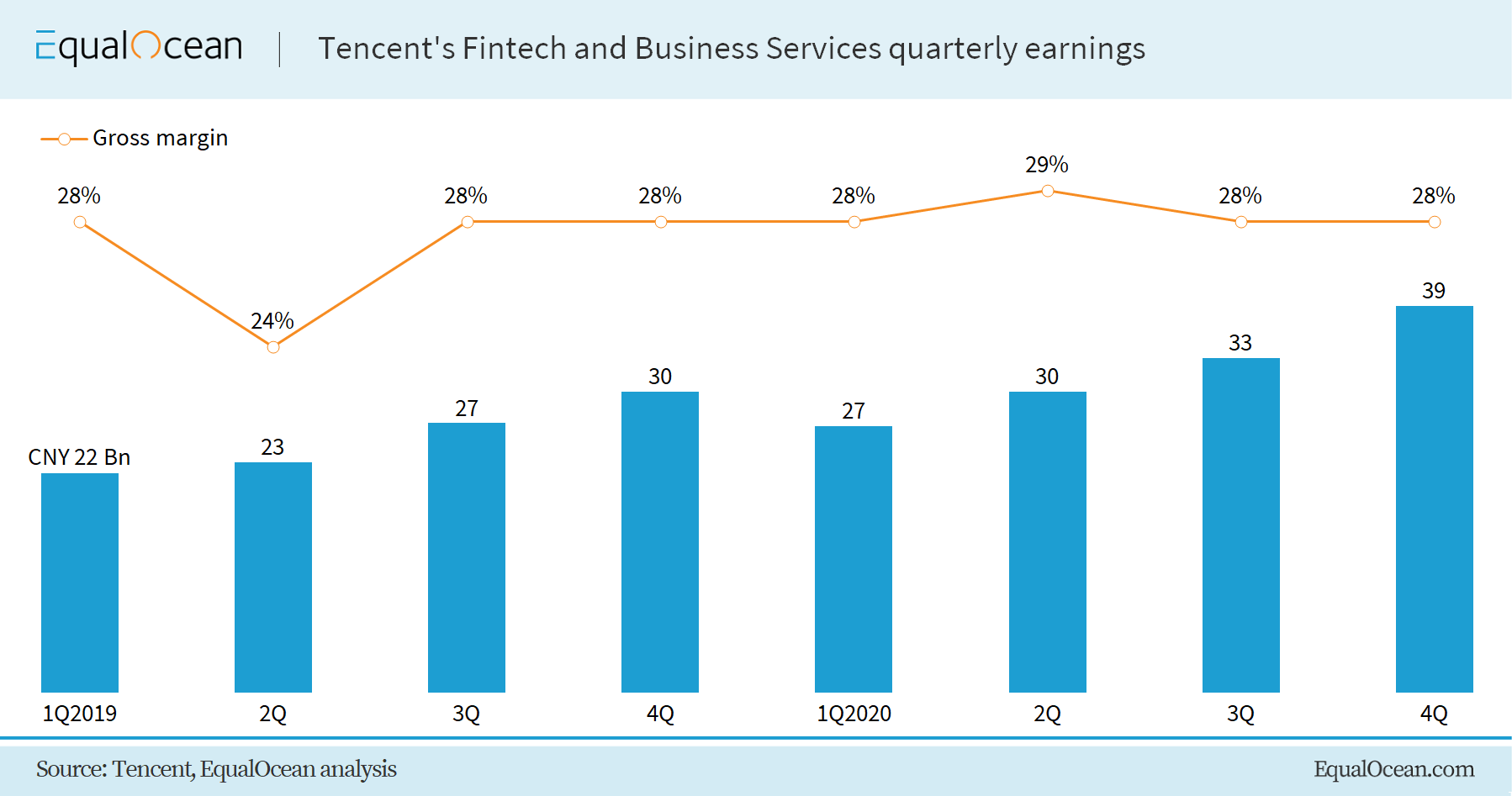 However, the company has not yet revealed exact financials from the cloud segment. The overall gross margin of the segment in 4Q20 is similar to Microsoft's Intelligent Cloud business, which is 29% in 2Q21F. However, the detail may deviate from the segment's figure given the fact that the revenue breakdown of each sector is ambiguous. As the company holds the second-largest market share in China's public cloud services, its momentum has been proved by its steady business growth. Overall, Tencent Cloud is by far co-piloting the industry development with Alibaba Cloud.

Internet companies lead cloud adoption in China. The cloud penetration in other industries, especially the traditional ones, is currently way behind. The digital transformation will keep on and the 'cake' size will grow proportionally to the scale of the country's commercial space. According to CAICT, a state think tank, the Chinese cloud market size is estimated to reach CNY 480 billion by 2023, growing from CNY 134 billion in 2019.

With around 40% of China's public cloud market, Alibaba Cloud is followed by Tencent Cloud, which holds 25% of the rest. In the burgeoning market with multiple enterprises opting for multi-cloud strategies, following other top cloud vendors, such as Huawei Cloud, Kingsoft Cloud (KC:NASDAQ), UCloud (688158:SZ) and Tianyi Cloud is utterly important. Along with the growth of giant cloud companies, newcomers in the field, especially cloud-native innovators, can also find their niches and eventually thrive.

Read through our latest analysis of Kingsoft Cloud and UCloud.

CONTACT US
Scan QR code to contact us for professional consulting services
Next article
Opinion: Ebang Is Another 'China Hustle' Absconding with Investors' Cash