China's Future Investment Watch series - Looking for China's SpaceX: To Infinity and Beyond 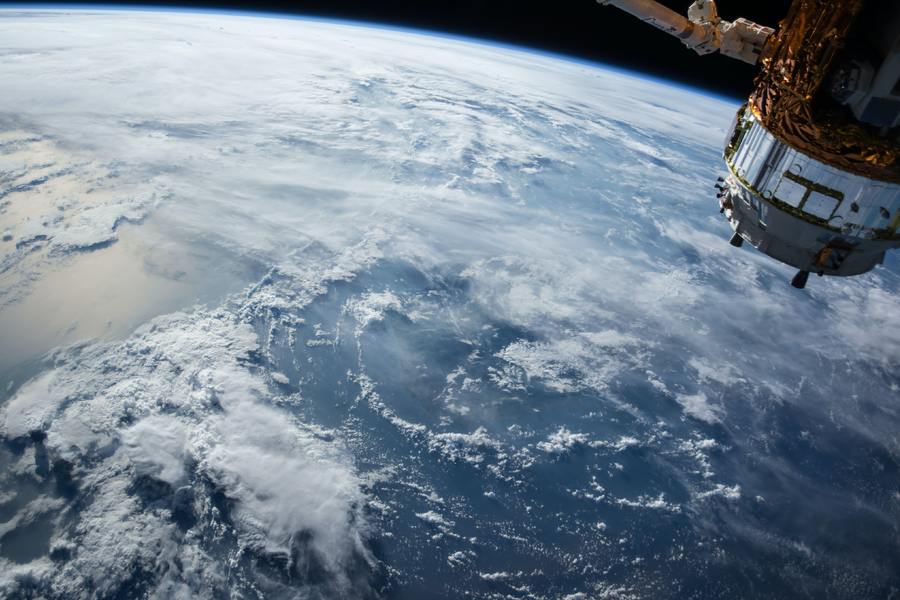 'To Infinity and Beyond' is the famous catchphrase of Buzz Lightyear in the movie Toy Story (1995). It inspires us to leave all our worldly things behind, going where to previously unthinkable and unimaginable places. Elon Musk is an out-and-out practitioner of this spirit.

Chinese people have also dreamed of exploring space ever since ancient times. Wan Hu, a legendary official who tried to become the world's first 'astronaut' by lifting himself into the heavens with rockets, is symbolic of the yearning. Since the founding of New China, the country has made a lot of efforts in its space race, most of which is supported by government funding. Since the start of the second decade of the 21st Century, the Chinese government has been encouraging private companies to develop commercial space interests. Several policies have been published to promote the development of China's commercial space industry, such as the National Medium- and Long-Term Development Plan for Civil Space Infrastructure 2015 to 2025 (Chinese: 国家民用空间基础设施中长期发展规划). In 2020, the whole market's revenue reached CNY 102 billion (close to EqualOcean's projection in 2020). Using the adjusted average growth rate of 22.1%, we expect China's commercial space market size to exceed CNY 300 billion by 2025. 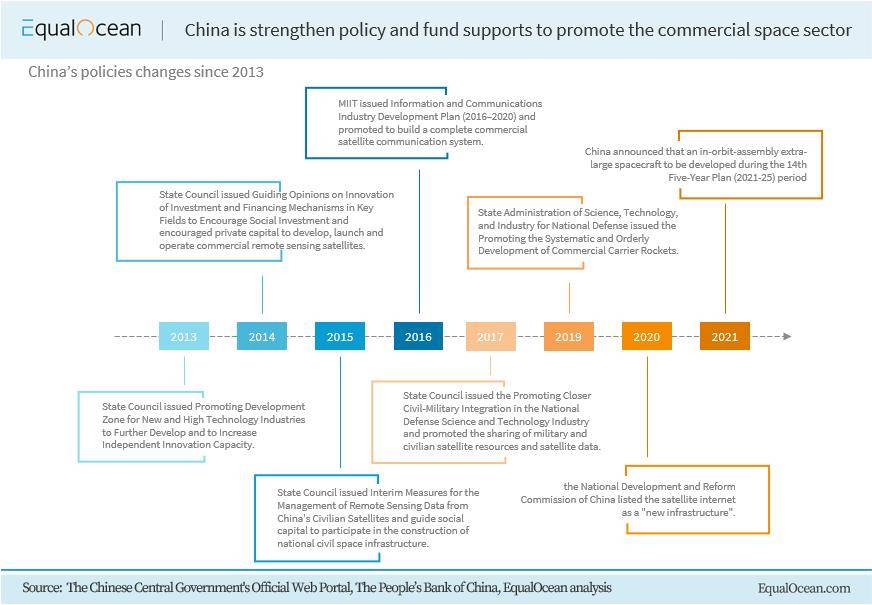 The industrial chain of commercial aerospace is complex. The upstream is mainly made up of satellite manufacturing companies, while the midstream is divided into launching devices (including rocket manufacturing) and ground devices, and the downstream includes three different sub-sectors, which are satellite operations, satellite applications, and aerospace services. 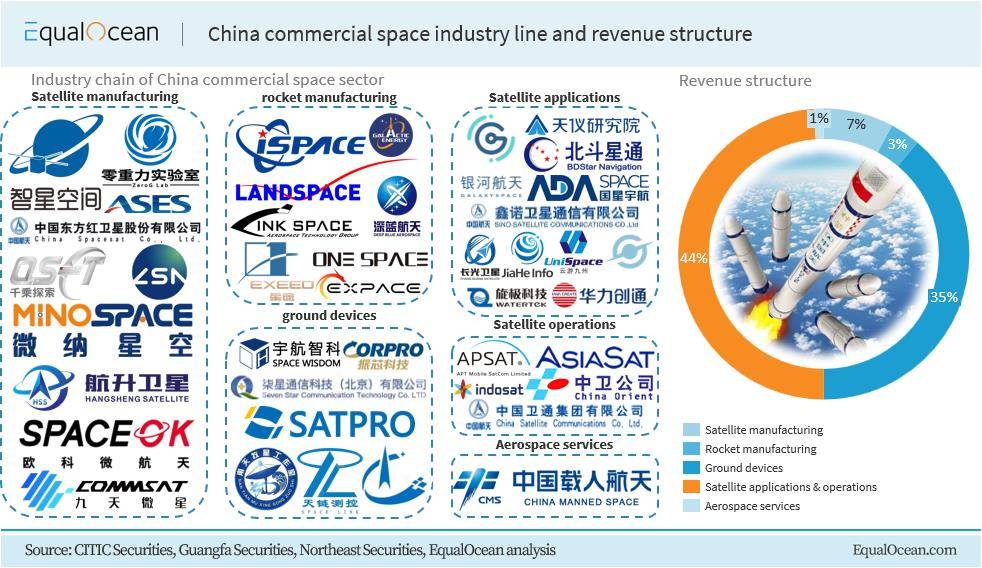 As for the upstream, in the field of satellite manufacturing and supporting manufacturing, large differences exist in customer demand with high technical barriers, which is similar to some traditional manufacturing industries (rocket manufacturing is the opposite). Satellite manufacturing accounts for about 7% of the market by revenue. In recent years, the research and manufacturing of small satellites (lighter than one ton) with the characteristics of high-cost performance, short research cycles, and wide application ranges began to become the most popular direction of development. According to USC data, the number of global small satellite launches has increased 22 times in the past decade. This also determines that more companies with non-state-owned backgrounds can participate in this production link. Before 2018, Shenzhen Aerospace Dongfanghong and Changguang Satellite with state-owned assets background dominated the market. In recent years, private companies such as Smart Satellite Technology, ZEROG Lab, Spacetrek Technology, and Commsat have gradually emerged in mass customization services and on-orbit delivery of high-performance small satellites.

As for the midstream, as mentioned earlier, the midstream includes rocket manufacturing (satellite launch) and ground devices. Rocket manufacturing (satellite launch) belongs to a small field, accounting for only 3% of the industrial chain, while ground device accounts for 45% of the market share of the industrial chain. First of all, rocket manufacturing and satellite launches are characterized by high investment, high risk, and low-cost performance. At present, the mainstream launch vehicles in China's commercial aerospace industry are mainly solid-fuel rockets, but almost all companies are trying to develop liquid-fuel rockets because liquid-fuel rockets are more stable and lower cost. In the field of rockets launch, Aerospace Science and Technology with state-owned assets background are outstanding. In recent years, private rocket manufacturing companies have gradually emerged. As for ground devices, which are more important on the chain, mainly include network devices (gateway stations, NOCs, SNG) and consumer devices (satellite TV, satellite radio equipment, DARS, GNSS). Ground equipment is one of the most important links in the construction of a satellite network, which is as important as the downstream communication system. Companies in this field have high bargaining power, mainly for navigation, communication, remote sensing, and other application terminals. The representative companies include Seven Star Communication Technology, Corpro Tech, and Satpro.

The downstream of the commercial aerospace industry chain is composed of satellite operations, satellite applications, and aerospace services. Satellite applications are the main business model, accounting for about 35% to 45% of the market share of the whole industry chain. Satellite applications are mainly reflected in navigation, communication, and remote sensing. Satellite navigation mainly includes hardware manufacturing and location services. In this field, China's independently developed BeiDou navigation system is improving networking and gradually replacing GPS. Remote sensing is the most interesting field in recent years, and new application scenarios are constantly developed. Nowadays, remote sensing technology has been widely used in the fields of environmental monitoring, urban and rural planning, and disaster prevention. Satellite communication belongs to traditional aerospace applications, and there are many domestic-related companies. However, these companies still focus on high orbit large communication satellites, and it is an industry consensus to develop low orbit small satellites that can be better integrated with ground devices in the future. The downstream representative companies of commercial aerospace include GalaxySpace, Tianyi Space, and BD Star Navigation.

SpaceX, by many means the leading company in the global commercial space area, is constructing Starlink with a network of 42,000 LEO satellites. The 100th flight of a Falcon 9 rocket delivered 51 satellites to orbit for SpaceX's Starlink network on 14 September 2021. The total number of satellites reached 1,791 (Orbit altitude 550 km/340 mi, 560 km/350 mi, and 570 km/350 mi) and 16 rockets were launched in the past 12 months. Meanwhile, SpaceX is developing Starship, an under-development rocket that will launch 400 Starlink satellites at a time.

By contrast, China's commercial space development is relatively late. 2015 is considered to be its tipping point. In 2020, the market achieved revenue of CNY 102.02 billion, growing at a CAGR of 22.1% from 2015 to 2020. As of 2020, the Chinese government submitted over 20 LEO constellation applications to the International Telecommunication Union (ITU). Overall, the Chinese commercial space market seems to be having great potential.

Despite the rapid growth rate of the Chinese commercial space business, one of the main problems of China's commercial space industry is that, unlike SpaceX, the companies generally focus on only one link in the industry chain, such as satellite manufacturing, user terminals, or launching services. For example, companies such as Galactic Energy, iSpace, and One Space are only focusing on space launching services, while companies such as Satpro International and Seven Star Communication are only focusing on ground terminal development. The data reflects the unbalanced development in China's commercial space industry.

Besides, low-cost reusable rocket launching is one of the burning issues. Liquid Propellant Rocket Engines (LPRE) are generally considered as the solution to this problem. SpaceX's Falcon 9 rockets have proved this. Falcon 9 rocket has achieved a 97% recycle rate and the cost has been cut to USD 50 million per launch. However, being at an early stage of development, the cost control and production capacity of domestic commercial companies is far from that of some developed commercial space companies, especially the likes of SpaceX.

We believe that 6G is the key to overtaking Chinese curves. 6G technology and its application can help China establish a more perfect commercial aerospace industry cluster (industrial chain & production base + talent reserve + supporting logistics chain), which is also lacking in China compared with the United States. In 2019, the Ministry of industry and information technology established a 6G research group called imt-2030 promotion group to promote 6G-related work. The comprehensive performance of 6G is also expected to be 10 to 100 times that of 5g, and various technical indicators will be further improved (delay less than 0.1ms, network depth up to 100%, millimeter level perceptual positioning).

At present, the development of integration of satellite-terrestrial networks has become the 6G consensus, which is of great significance to the development of China's commercial aerospace field. 6G has broader application scenarios, especially in the fields of high-speed Internet access in the air, holographic communication, advanced intelligent industry, human intelligence twin, intelligent mobile manned platform, and so on. In the future, users only need to carry one terminal to realize global seamless roaming and imperceptible switching. The rapid development of integration of satellite-terrestrial networks technology and the formation of a perfect network system are conducive to occupying the commanding heights of aerospace technology and driving technology development and market expansion with demand again (overtaking in curves).

The portrait of future winners

After clarifying the Sino-US commercial aerospace window period, it is very important to identify potential companies for investors, especially institutional investors, who want to lay out China's future commercial aerospace. We believe that there are several characteristics that need special attention in arranging China's aerospace field in advance and looking for potential companies. It is important to:

We believe that companies with the above six characteristics are more likely to win the space race. Based on such criteria, we found 7 companies that may win in the merge tide, which are LandSpace, iSpace, One Space, GalaxySpace, Chang Guang Satellite Technology, JiuZhou Cloud Arrow Space Technology, Oriental Space Technology (Shandong)

'To Infinity and Beyond'

As mentioned earlier, investors, especially VC companies, should not be afraid to invest in China. Investing in China is still profitable, but as WSJ said, China is a classic stock pickers market, which is also fit for VC industries and private companies, selecting specific industries and companies. We believe that the most profitable industries in China are always related to policies – the commercial space sector is one of the focal points. We firmly believe it is a great time to create a layout in the Chinese commercial space sector; after all, as Dambisa Moyo said, the best time to plant a tree was 20 years ago and the second-best time is now.