Leading home appliance companies are seeking long-term growth through diversified and global strategies as they seek a share of the limited space in the home appliance industry. 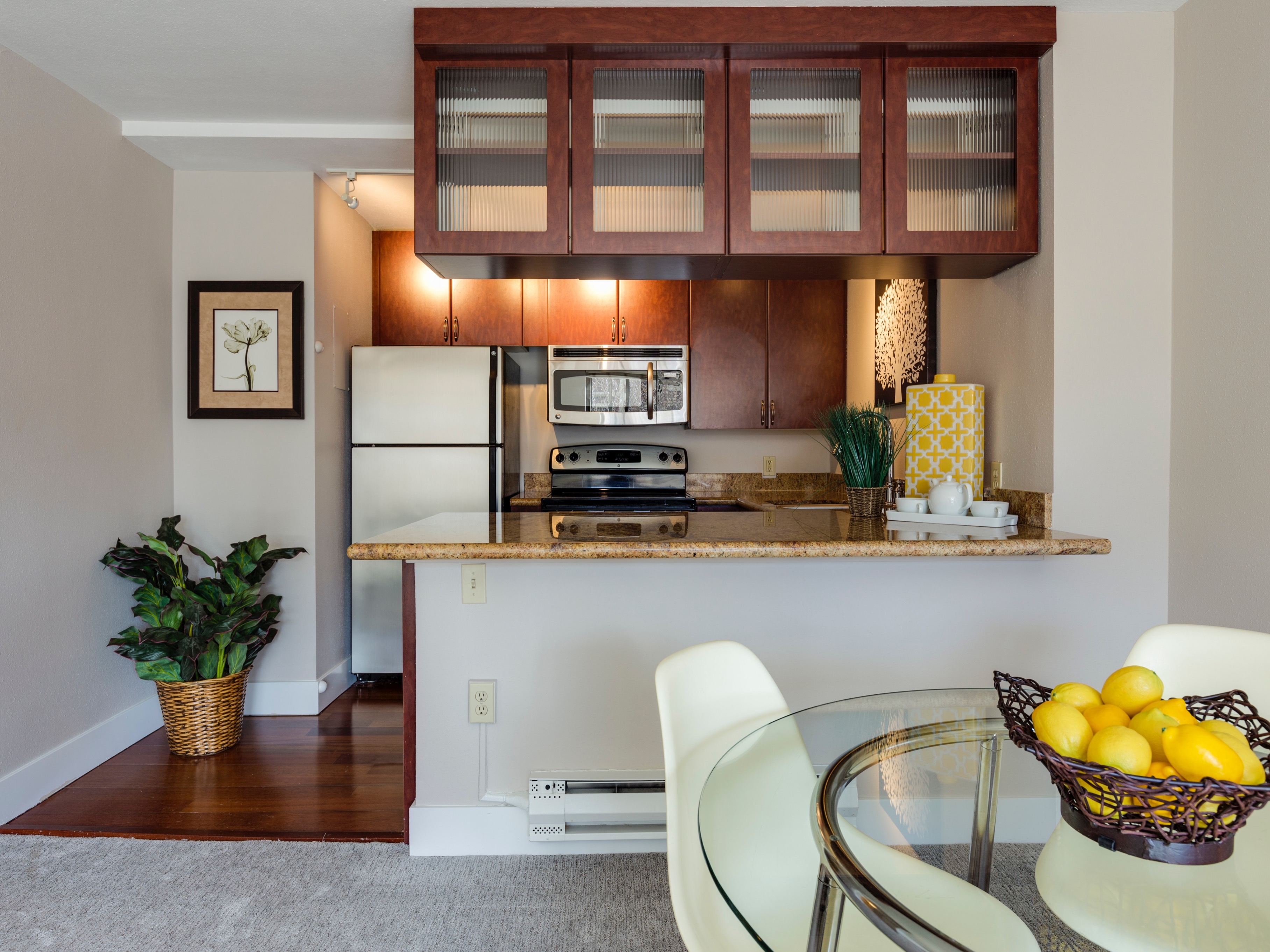 ► Despite a dim sky over the market, Chinese home appliance companies like Midea, Gree and Haier have maintained strong positions worldwide. The leading three generated the highest revenue and were the most profitable among the top ten selected companies.
► Bear Electric, a rising star, recorded a 123% increase in stock price, ranking it first, as the firm forecasts profits to surge 70% in 2020Q1 due to more adoption of online channels.
► High-end players are seeking transformation as the industry is saturated.

The home appliance industry continued its sluggish performance in 2019. Although the sales volume increased slightly, the retail revenue declined due to the ‘price wars’ of giants trying to grab market share.

Data from the National Bureau of Statistics showed that the domestic market saw growth diminish in 2019 as profit margins rose. The revenue of the industry reached CNY 1.53 trillion, an increase of 4.31% YoY, while sales growth was 9.9% a year ago; net profit recorded CNY 133.86 billion, an increase of 11.89% YoY compared to 2018's 2.5%. The export revenue reached a record high, seeing USD 70.92 billion, an increase of 3.3% YoY. However, in terms of growth rate, it felled 6.6 percentage points.

Despite the industry downturn, Chinese brands still handed in a dazzling transcript in the international market, namely Haier and Midea. Haier (600690:SH) topped with a 16% market share, followed by Whirlpool and Midea (000333:SZ), accounting for 11% and 7%, respectively. 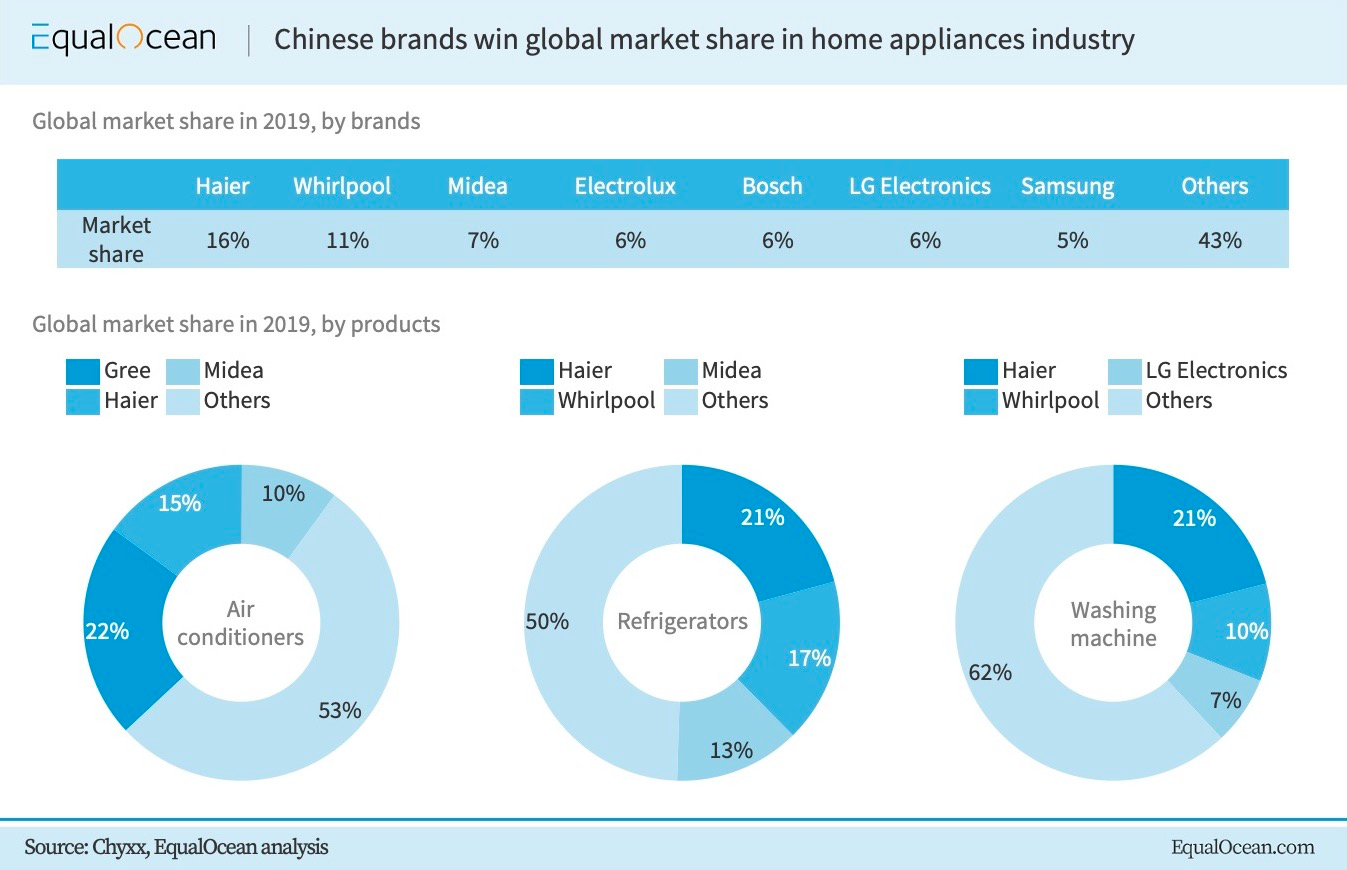 A glance at the top 10 home appliances companies 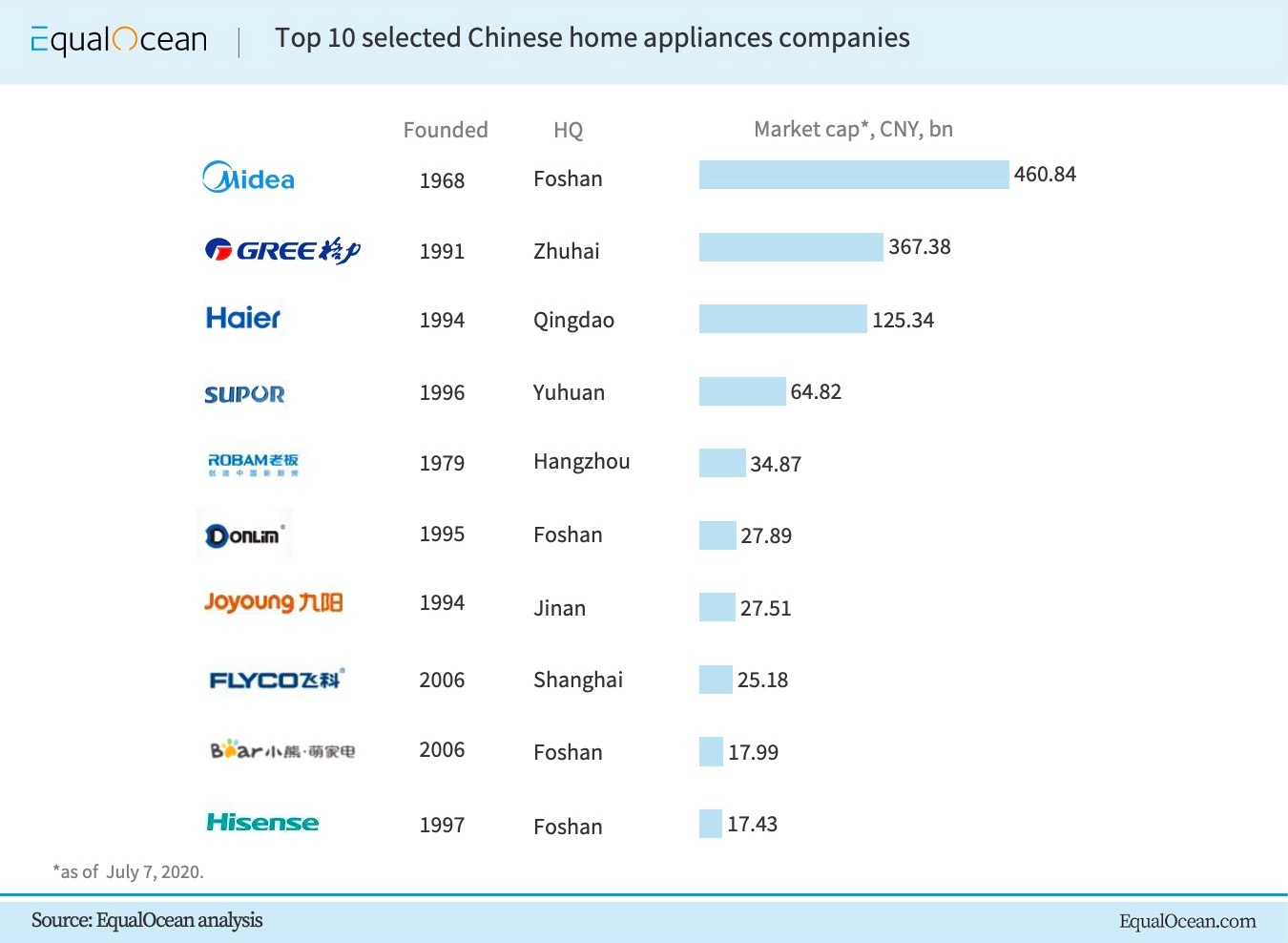 Midea divides its business into four segments – Heating Ventilation and Air Conditioning (HVAC), Consumer appliances, Robotics and automation systems and Others. As the revenue and profit engine, HVAC generates 43% revenue with a 31% net profit margin. Around 42% of total revenue is from overseas, of which 70% is generated from OEM, making the firm hard to grab global market share. However, the all-around player grasped core technology – such as compressors – through acquiring Toshiba, an integrated motor manufacturer, and began to run ahead of other brands.

Gree generates 70% revenue from A/C, which suffered a storm amid the pandemic thanks to concentrated business. Expanding offline business through cooperation with dealers reduced the risk of excessive inventory and dramatic fluctuations in sales – but also drove down online sales.

Taking fridges & freezers and washing machines as core money-generating products, Haier aims at promoting the brand on the global stage. In the past four years, the company generated a fivefold increase in overseas income, with 100% revenue from self-operated products. Due to massive investment in R&D and promotion in the early stages, gross margins of its offshore business touched the lowest level, 3%, in 2015. However, this number was up to 25% in 2019, catching up with Midea. Up to now, Haier has taken the lead in fridges and washing machines.

Consistent with their valuation, the revenue and profitability of three giants topped as well. Affected by the depressed market, the revenue growth rate of these companies is slowing down. Yet, the net profit margin maintains stable, indicating robust cost control. Besides, as IoT becomes a trend, traditional manufacturers have undergone a technological transformation by developing smart home appliances. With more and more intelligent products launched, opportunities-seekers are likely to break the dilemma of the sluggish market. 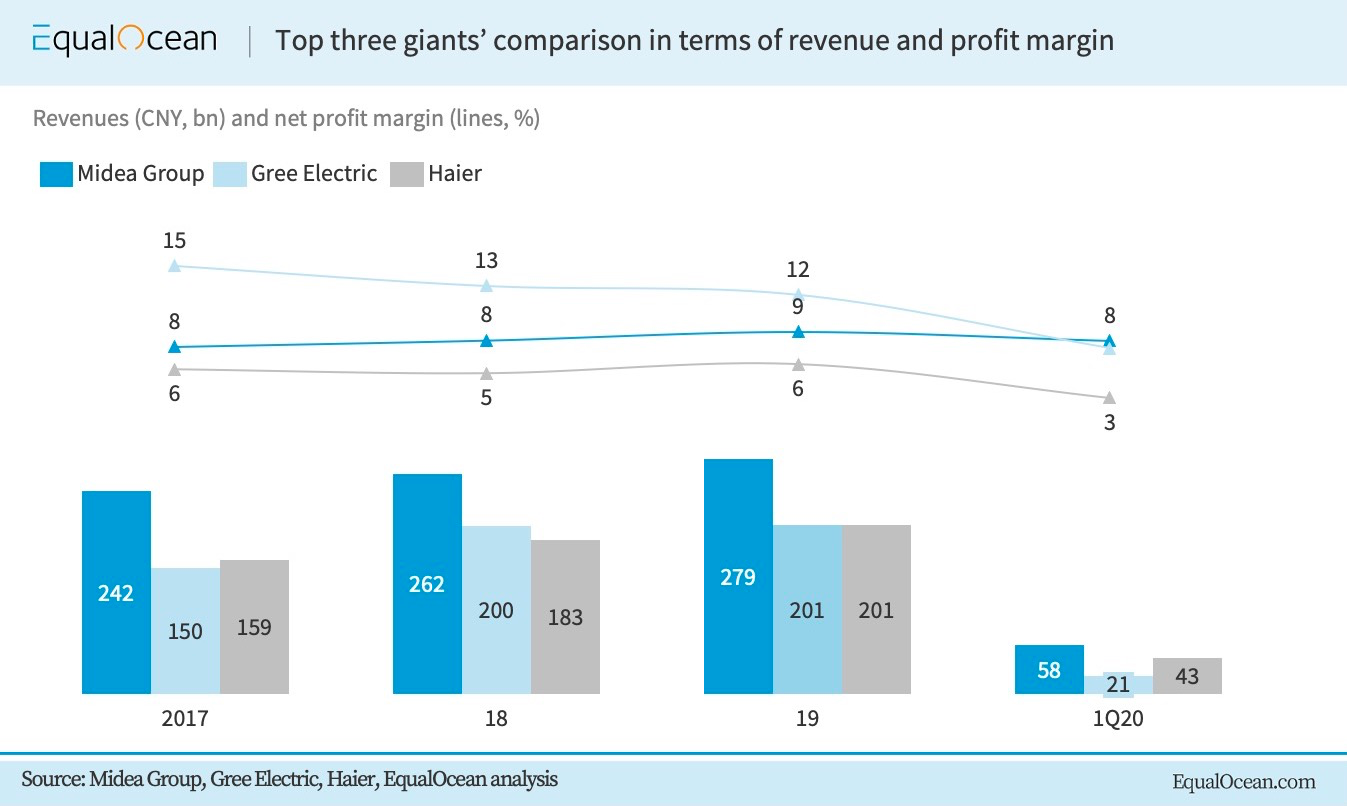 Supor (002032:SZ), a cookware manufacturer, is the first listed company in the cookware industry, aiming at producing kitchen appliances. Pressure cookers and woks have been ranking first in terms of market share, and the rice cooker and electric pressure cooker' market share have also leaped to the second leading position in the domestic market. With revenue and net profits climbing over nine consecutive years, the company suffered a performance ‘Waterloo’ during the pandemic. Thanks to concentrated offline channels, revenue and profit plummeted 34% and 11.83%, respectively.

Robam (002508:SZ), another kitchen appliances company, wins the highest market share of 37.8% in the range track. After enjoying a compounded net profit growth rate of 43.8% in the past eight years, the ‘shining star’ saw a single-digit increase in both revenue and profit in 2019 for the first time. To cope with the overall downturn in the kitchen appliance industry, the firm pointed its finger at a new field, the 'hardcover housing market', driving the 'engineering channel' revenue to grow 80% year-on-year.

Donlim (002705:SZ) produces small home appliances such as bread makers, eggbeaters and toasters. With OEM and exports as the main business, the company generated more than 80% revenue from the overseas market. In the past three years, gross margins climbed steadily, stabilizing the firm's leading position in the export of small household appliances. Also, taking advantage of its product technology, Donlim is capturing domestic market share through self-driven brand promotion.

Yoyoung (002242:SZ), specializes in producing soymilk machine and juice machine. With 98% revenue from the domestic market, the company follows industry trends, seeing a slowdown revenue growth rate. The result is connected to its products' quality concerns. In the 36 non-stick cookware comparison tests carried out by the Guangzhou Consumer Council in 2019, Yoyoung's sample ranked lower in multiple indicators. It ranked second from the bottom in the overall score ranking. Increasing product research and development to further improve quality needs to be on the agenda.

Bear Electric (002959:SZ) is positioned in cute appliances with core products ranking first in online channels, including yogurt machines, electric lunch boxes and egg cookers. Thanks to reliance on online channels that benefited from the epidemic, the company forecasts net profit to surge 60%-70% in 2020Q1, far ahead that of Supor and Robam. However, the firm needs to pay attention to changes in the sales policies and charging standards of online platforms, which may profoundly affect the company's operation.

Hisense (000921:SZ), a direct competitor to Gree, Midea and Haier, generates 44% revenue from A/C and 43% from freezers and washing machines. In terms of revenue scale, it only reached 10% of the main business of the three giants, and the A/C segment ranked fifth place. Affected by the epidemic, the company expects net profit to plummet 70%-100%. Along with the low demand for the industry, transformation is imminent. 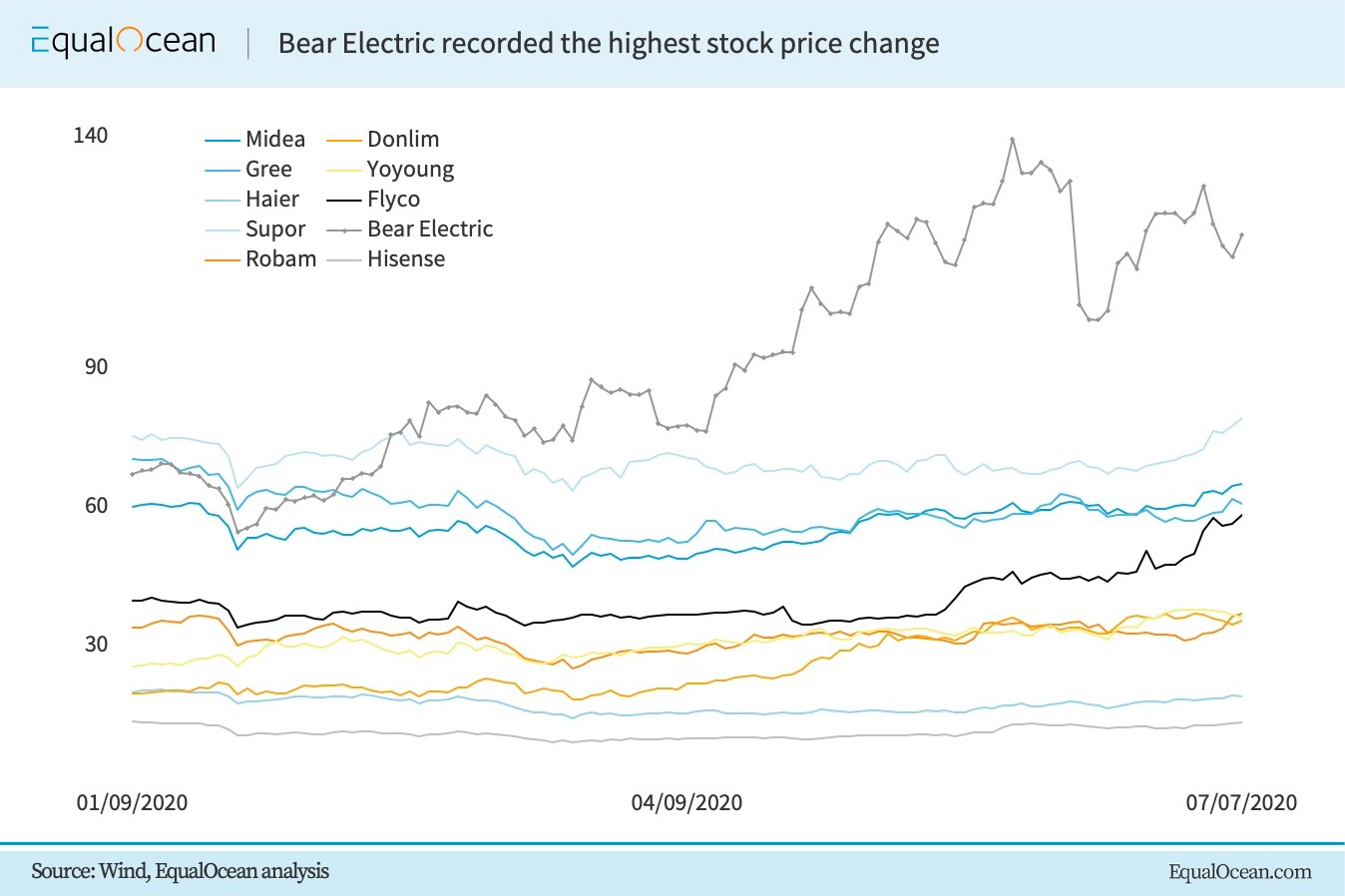 In terms of stock price change, it is consistent with companies' performances in 1H2020. Bear Electric recorded a 123.49% increase in stock price, ranking first among ten companies, as it expects net profit to rise 70% thanks to online layout in the first quarter of 2020 as well as it is a newly listed company. Midea performed better than Gree and Haier because it is less affected by the epidemic due to a more diversified strategy.

The PE of smaller home appliances companies, such as Bear Electric, is generally higher than the industry average of 23.23, indicating the subdivision sector still has a higher growth rate. Under the attack of the epidemic, companies with online channel advantages enjoy higher PE valuations. 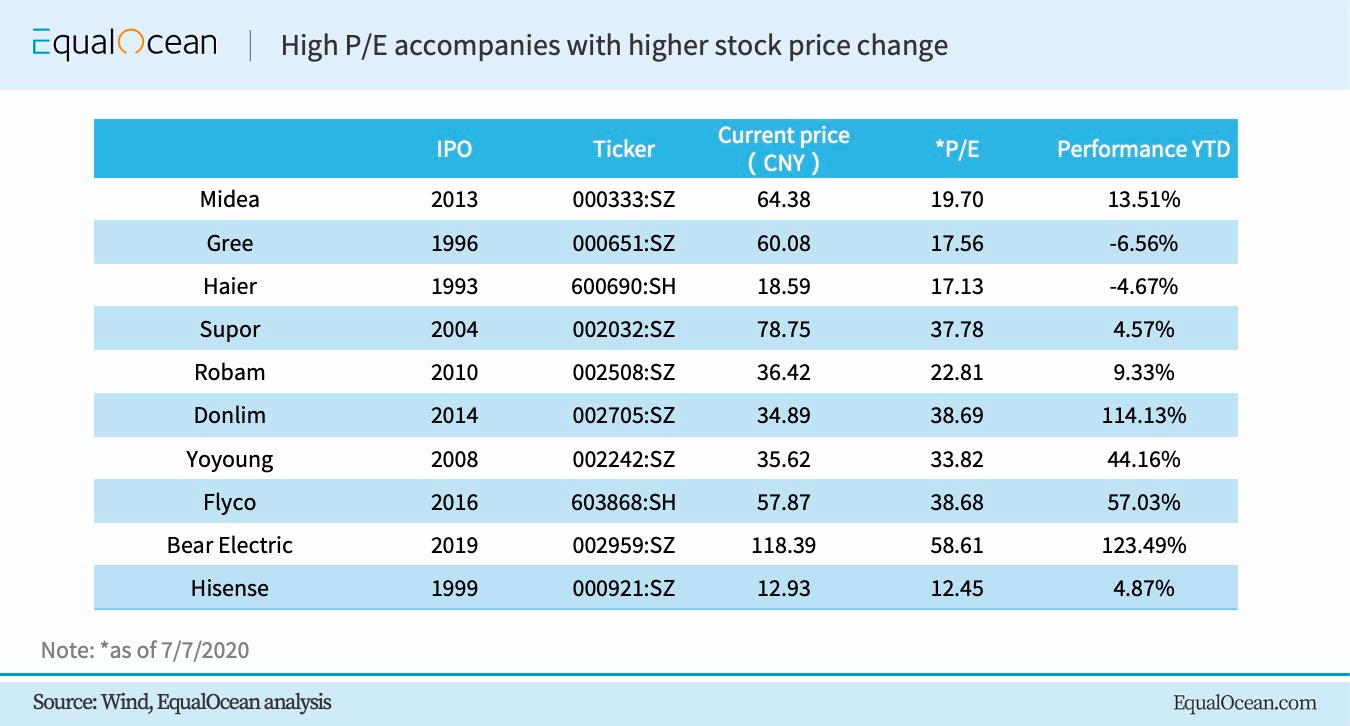 In general, the high-end home appliance market is in fierce competition; the concentration ratio of the three major white appliances exceeds 64%. Players have to modulate prices for quantity shifts and seek transformation. In the small home appliances field, the advantages of companies that have deployed online channels are prominent. But considering the overall downturn in the home appliance industry, companies must explore new ways to be more profitable and stand out.