Huawei's HiSilicon: At Sixes and Sevens?

One of the most technologically advanced Chinese chipmakers is at risk of international isolation. 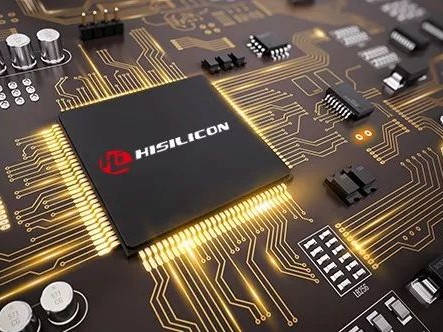 ➤ The recent increase in sales of Huawei smartphones propelled HiSilicon into the world’s top ten largest chipmakers.
➤ Its integrated circuits are technically comparable to those made by Qualcomm.
➤ The chipmaking process is the epitome of the global supply chain in action.

As recent experience has shown, the main focus of the United States‘ altercation with Huawei is the Shenzhen corporation’s wholly-owned fabless chipmaker HiSilicon, which provides comprehensive connectivity and multimedia chipset solutions.

In the first quarter of this year, HiSilicon’s processor shipments in China exceeded that of Qualcomm (QCOM:NASDAQ) for the first time. As a result, the company ranked among the top 10 semiconductor sellers globally in the same period.

By looking into the shipments of processors within the Chinese market in 1Q 2019, 4Q 2019 and 1Q 2020, we can see that the market shares of Qualcomm and MediaTek (2454:TW) have been declining while HiSilicon’s grew from 24.3% to 43.9%, making it the largest processor vendor in China. 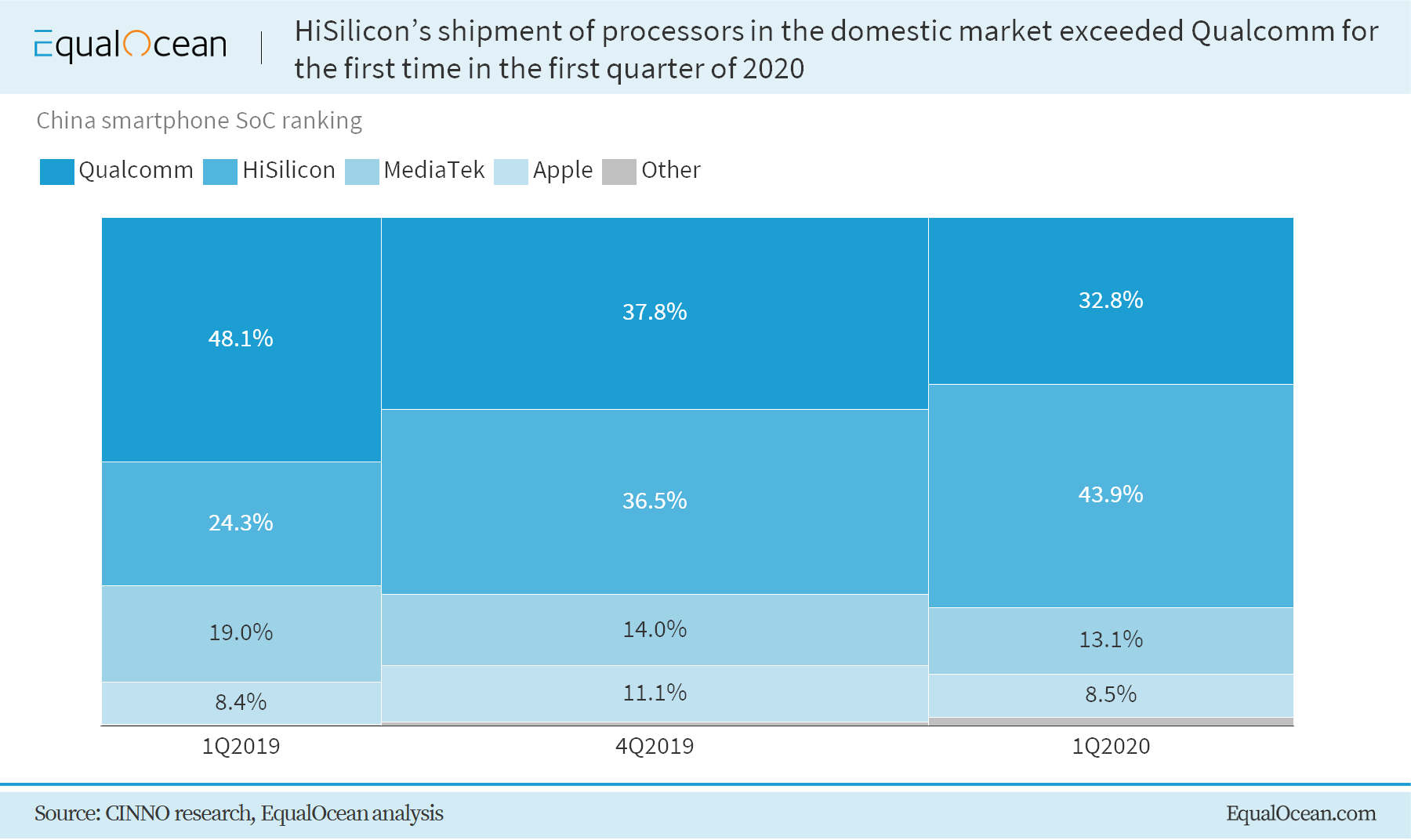 Besides, in terms of semiconductor sales, in the first quarter of 2020, HiSilicon first ranked in the top 10 in the global market, with USD 2.7 billion. By comparison, Qualcomm was the seventh-largest firm, the revenues of which were USD 4.1 billion in that period. Although there is still a certain distance from the international giants including Intel, Samsung (005930:KR) and TSMC (TSM:NYSE), the gap is shrinking. 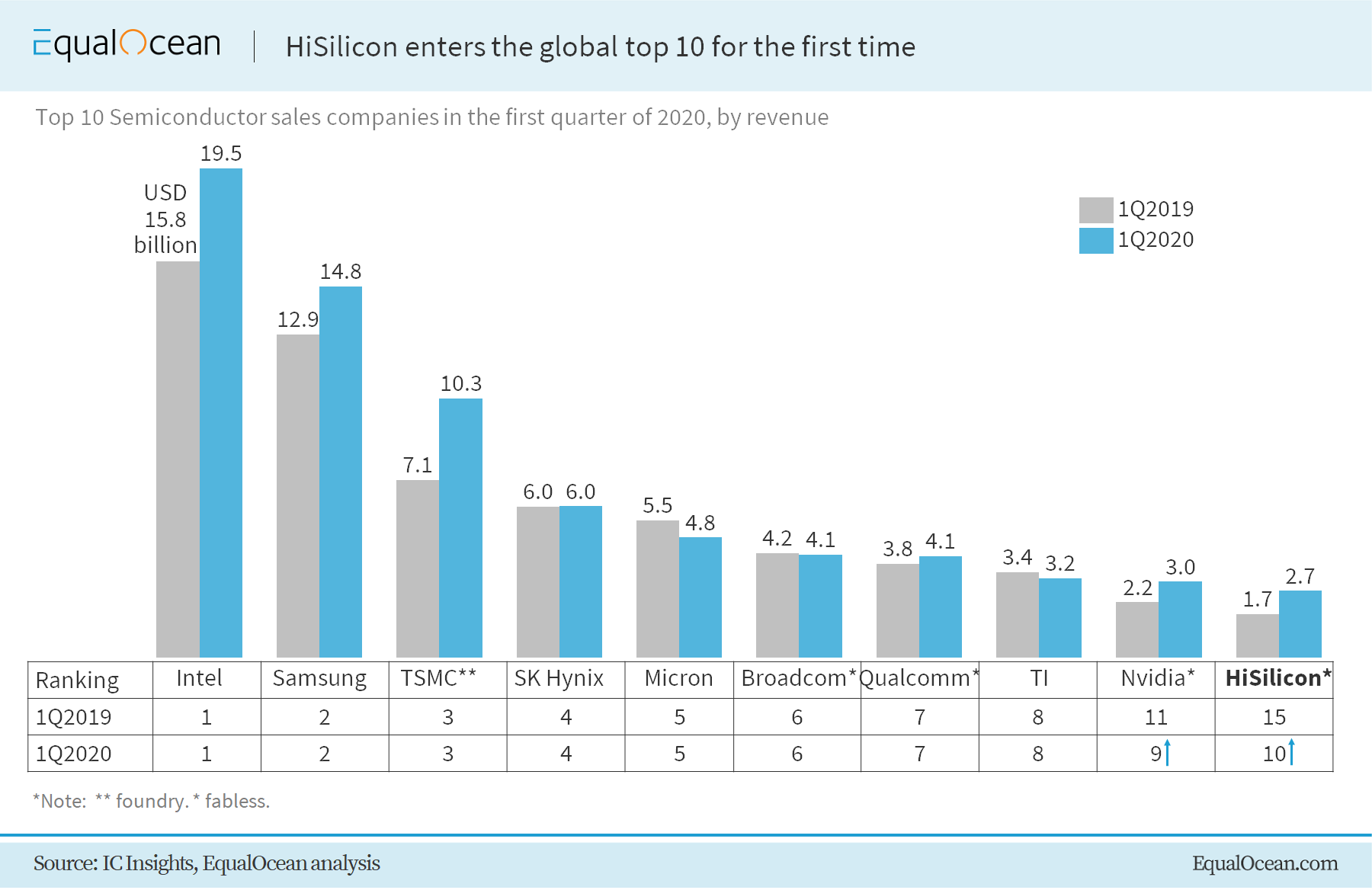 The progress made by HiSilicon mainly resulted from two factors: the increasing sales volume of Huawei smartphones ¬– its main downstream application – and the highly competitive performance of its microdevices.

According to the data provided by Counterpoint Research, Huawei is the best performer in the Chinese market, grabbing 46% market share in the second quarter of this year. The company’s smartphone shipments have increased from 205 million to 239 million, and its global market share reached 16% in 2019, surpassing 14% of Apple in the same period.

Improvement of smartphone sales also comes from the high performance of its chips.

There are two main kinds of chips developed by HiSilicon, including System-on-a-Chip (SoC) Kirin and Balong, a modem chipset. In addition, it has AI processor Ascend, CPU Kunpeng, Camera SoC, TV solutions and other product categories.

And on the demand side, HiSilicon is trying to expand the customer base beyond Huawei. It is reported that the chipmaker has signed a cooperation agreement with BYD to explore new applications: the Kirin 710A will become its first System-on-a-Chip (SoC) to power digital cockpits. Its chips are also come equipped (link in Chinese) in Changhong’s TVs. 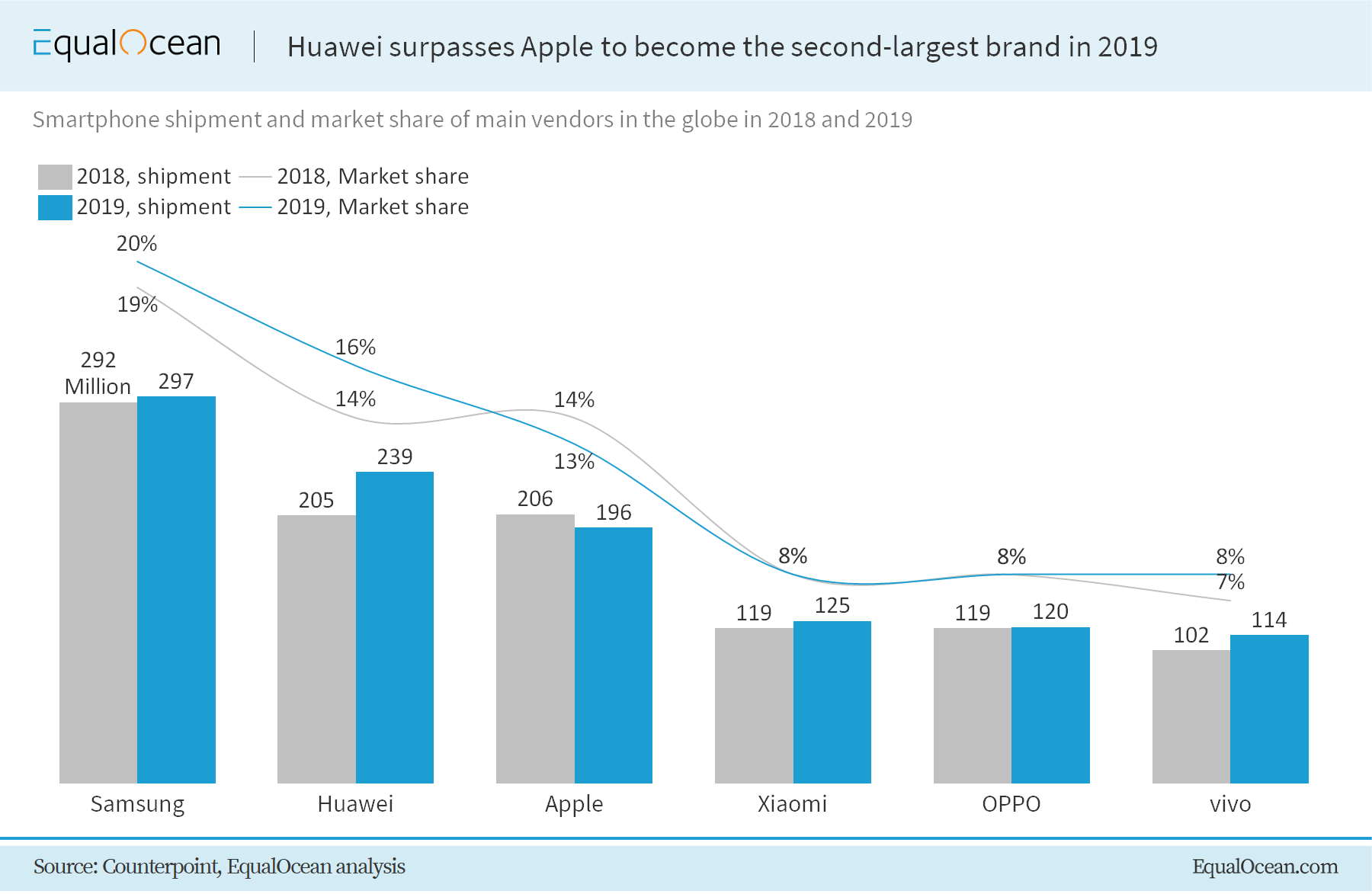 Inheriting Huawei’s tradition of spending 10% of total revenues each year on research and development, HiSilicon has successfully developed more than 200 models with proprietary Intellectual Property Rights (IPR) and filed over 8,000 patents over the past few years.

It is known that most Chinese smartphone companies order chips from Qualcomm, which launched its first 5G SoC at the end of 2018. To make a more detailed understanding of the performance of HiSilicon’s chips, we will compare two companies’ latest 5G SoC in CPU, GPU, battery life, download and upload speed.

Though the overall performance of Kirin 985 is worse than that of Snapdragon 865, the difference is small and it outperforms the latter one in terms of GPU and CPU frequency, and upload speed.

Though HiSilicon features self-developed chips, companies outside of China’s mainland are indispensable.

► HiSilicon is a fabless Integrated Circuits (IC) designer, which means that its product will not be made without a foundry. TSMC, the largest foundry owning the most advanced 7nm process techniques and to be the first to be capable of 5nm, is currently caught in the crossfire between the two largest economies.
► HiSilicon should pay IP fees for many overseas companies. Qualcomm has signed a long-term and global patent license agreement with Huawei: it will record about USD 1.8 billion from Huawei in the third quarter. Besides, HiSilicon needs to get licenses of chip architecture from Arm Holdings. The chipmakers should also pay for electronic design automation (EDA) software.

Some companies listed above have deep business relationships with the United States. For instance, Given the fact that TSMC is using US-developed patented technology, it is not allowed to manufacture chips for HiSilicon without the country’s permit. TSMC is likely to become the first semiconductor company in the globe to be capable of the 5nm process. HiSilicon has no other choice but cooperating with the Taiwanese fabrication platform.

It is imaginable how difficult the situation of HiSilicon is.

However, more Chinese mainland companies are rising up. SMIC realized the mass production of 14nm at the end of 2019. JCET is capable of various kinds of packaging and testing techniques. The problem is that the mainland businesses’ technology lags behind global large semiconductor companies including TSMC, Intel and Samsung. Those large companies have first-mover advantages and been in the industry for many years, making large amounts of revenue and can realize the high investment in research and development while local semiconductor companies are young, compared with them.

The whole process of semiconductor mirrors the global supply chain. For example, the basic chip architecture provider Arm is headquartered in the United Kingdom, the largest foundry (TSMC) is in Taiwan and the most advanced mask aligners come from ASML, which is in the Netherlands.

After reviewing the industry chain of semiconductors, to make sure the cost performance of products, there will be no completely domestic chips, at least in the short term. In the conflict among economies, there are no permanent winners and losers, countries are making the others better.

A new balance will be formed after the current wave of global turbulence. Both HiSilicon and China should seize appearing opportunities and hedge the risks.