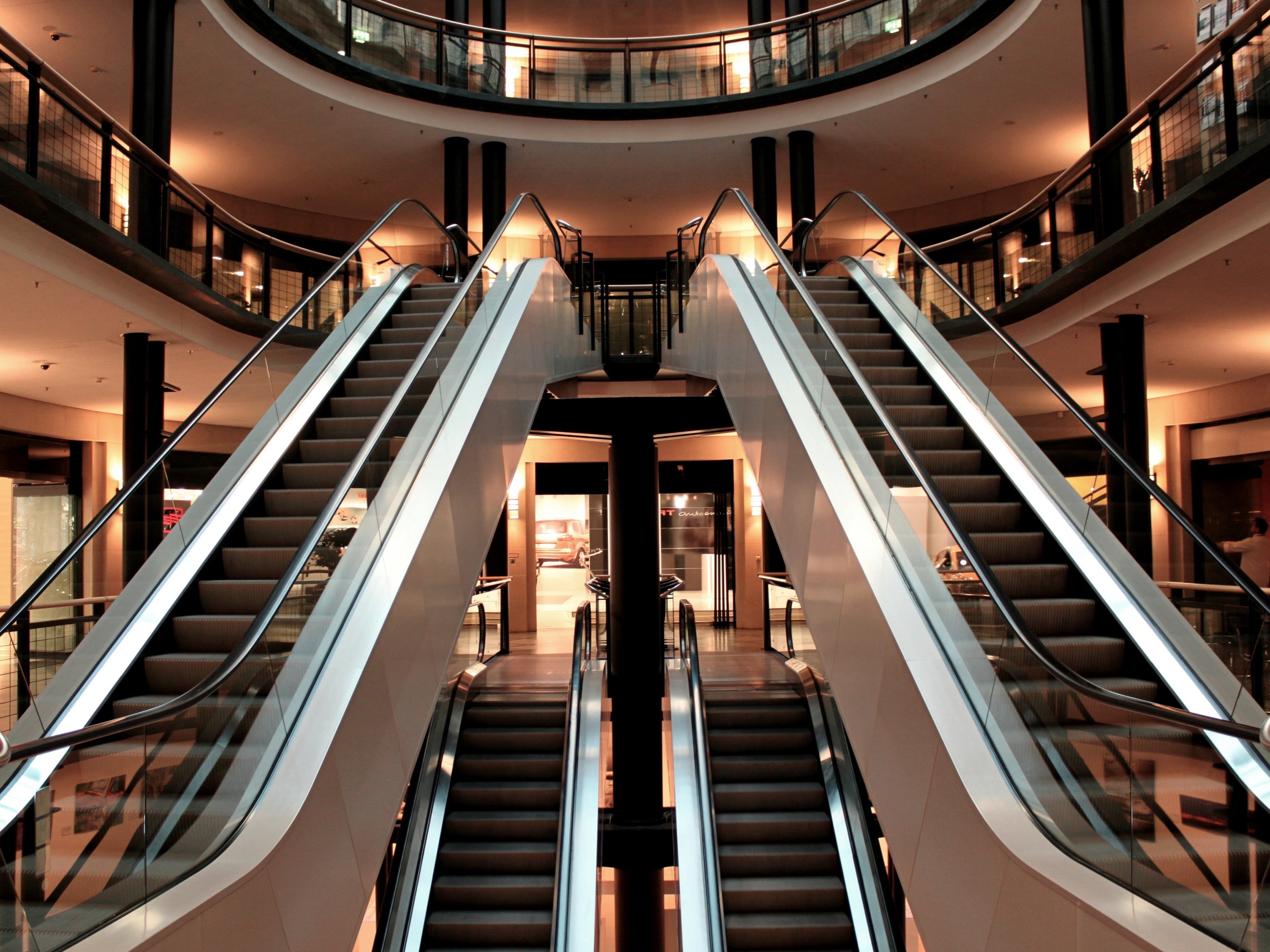 ► In the first half of 2020, financing activities in China's consumer sector plummeted to CNY 35 billion, down 51% year-on-year.
► Angel/Seed and Series A financing rounds recorded the most significant decline in both deal value and deals over the past five years.
► Local life services, e-commerce, tourism, social networks and sports are the most significant sub-sectors in terms of deal value.
► Shining stars in 1H20 include Bianlifeng, Wandougongzhu and Perfect Diary, to name a few.

Trouble seldom comes in the singular. Sino-US trade frictions led to the Chinese economy’s slowdown, with that pattern holding since 2018, and the sudden pandemic then worsened the situation, causing investment institutions to sit on their wallets. Companies are having to lay off staff and reduce salaries, and many small businesses without substantial financial backing are going bankrupt.

Under the tide of the downturn in the capital market, the consumer sector, which was severely affected by the epidemic, didn’t get an olive branch from investors.

Angel/Seed and Series A financing rounds recorded the most significant decline in both deal value and deals over the past five years, indicating investors are more willing to pay for mature business instead of bearing higher risks for early-stage startups. By contrast, the number of strategic investments is four times 2014, reaching 44 deals in 1H2020, signals investors’ rising appetite for management, rather than being purely financial advisors, with more CVCs joining the game.

The epidemic has accelerated the digitization of local life services. Less affected by the epidemic, the deal value of local life services came top among five businesses, accounting for 52.7% as of the total amount. The situation that saw people quarantined at home has prevented most physical companies from operating, thus triggering demand for online services such as online grocery shopping and non-contact delivery. 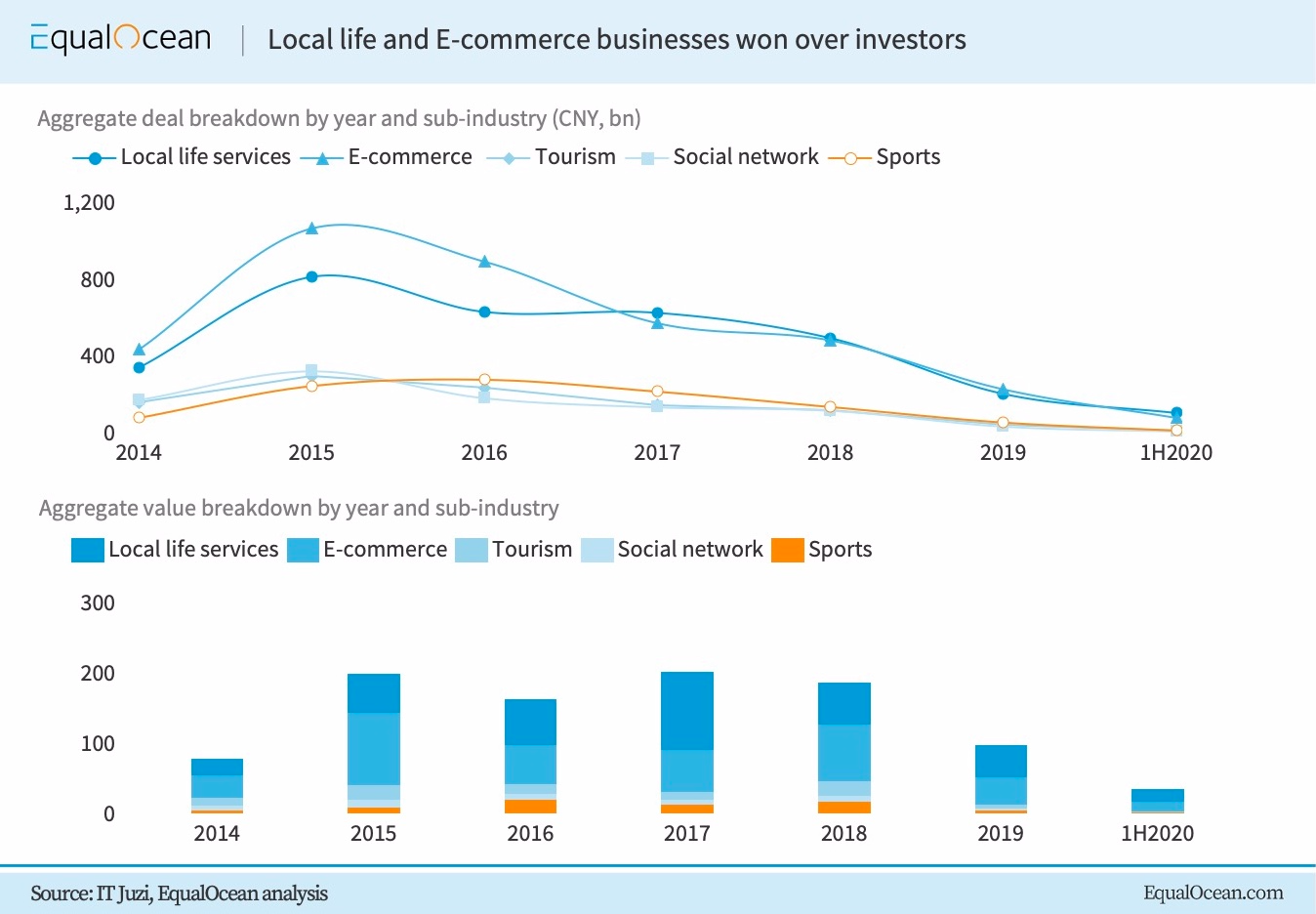 E-commerce, one of the all-time hottest niches since 2014, handed out a similar transcript with local life services as most orders were completed via platforms, proving their resilience during COVID-19.

On the contrary, both tourism and sports saw the total value plummet to CNY 1 billion across 11 deals. To prevent viruses from spreading, governments strictly prohibited group outdoor activities. The occurrence of a ‘black swan event’ possibly made investors lose heavily due to the hidden dangers of offline businesses. 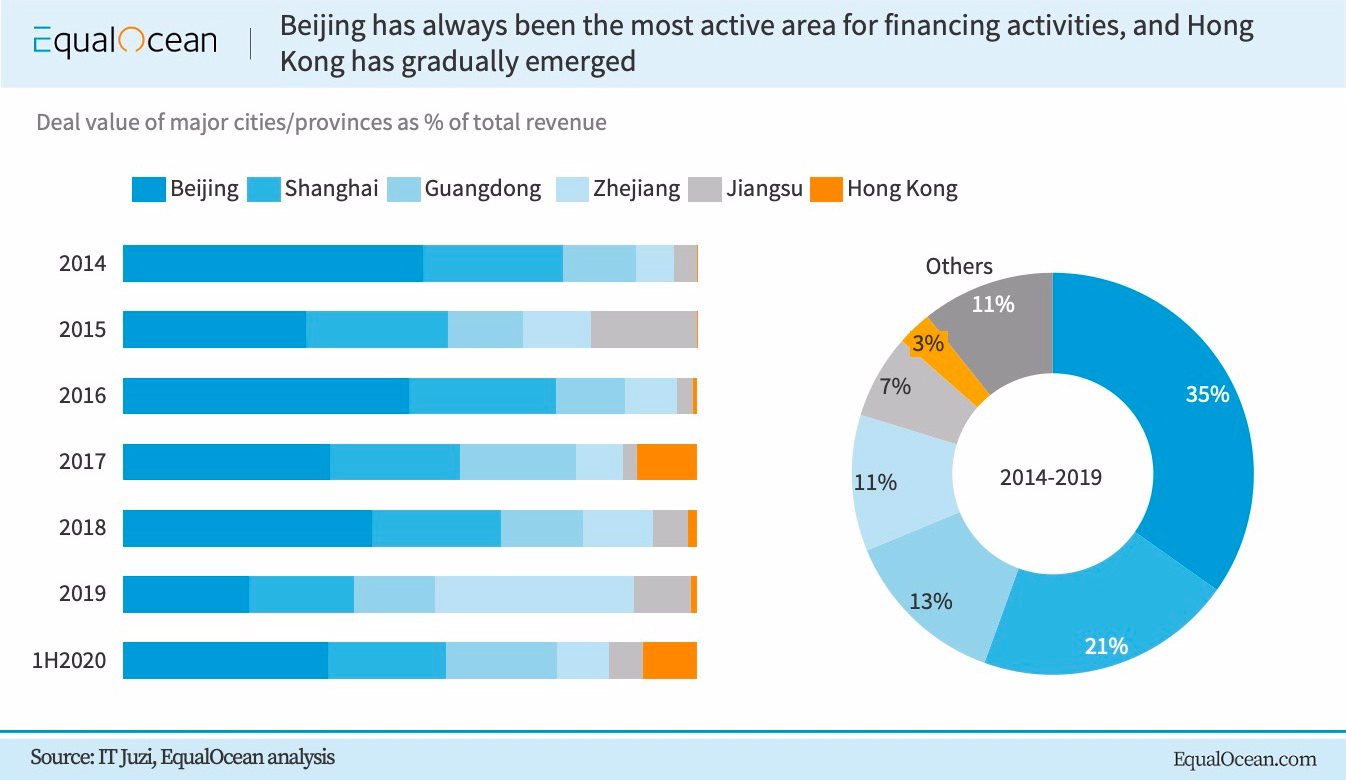 A glance at the top 10 performing companies

Local life services. Bianlifeng, a convenience store using digital analysis tools, closed a new round of financing, with cumulative funds of USD 1.5 billion, in May 2020. Established in 2016, the company already runs over 1500 stores and claims that it has already turned losses into profits for all Beijing-based stores, while 7-Eleven took 15 years, eventually managing 2500 stores. With digital solutions differentiated among peers, the rising star is ready for the next milestone. 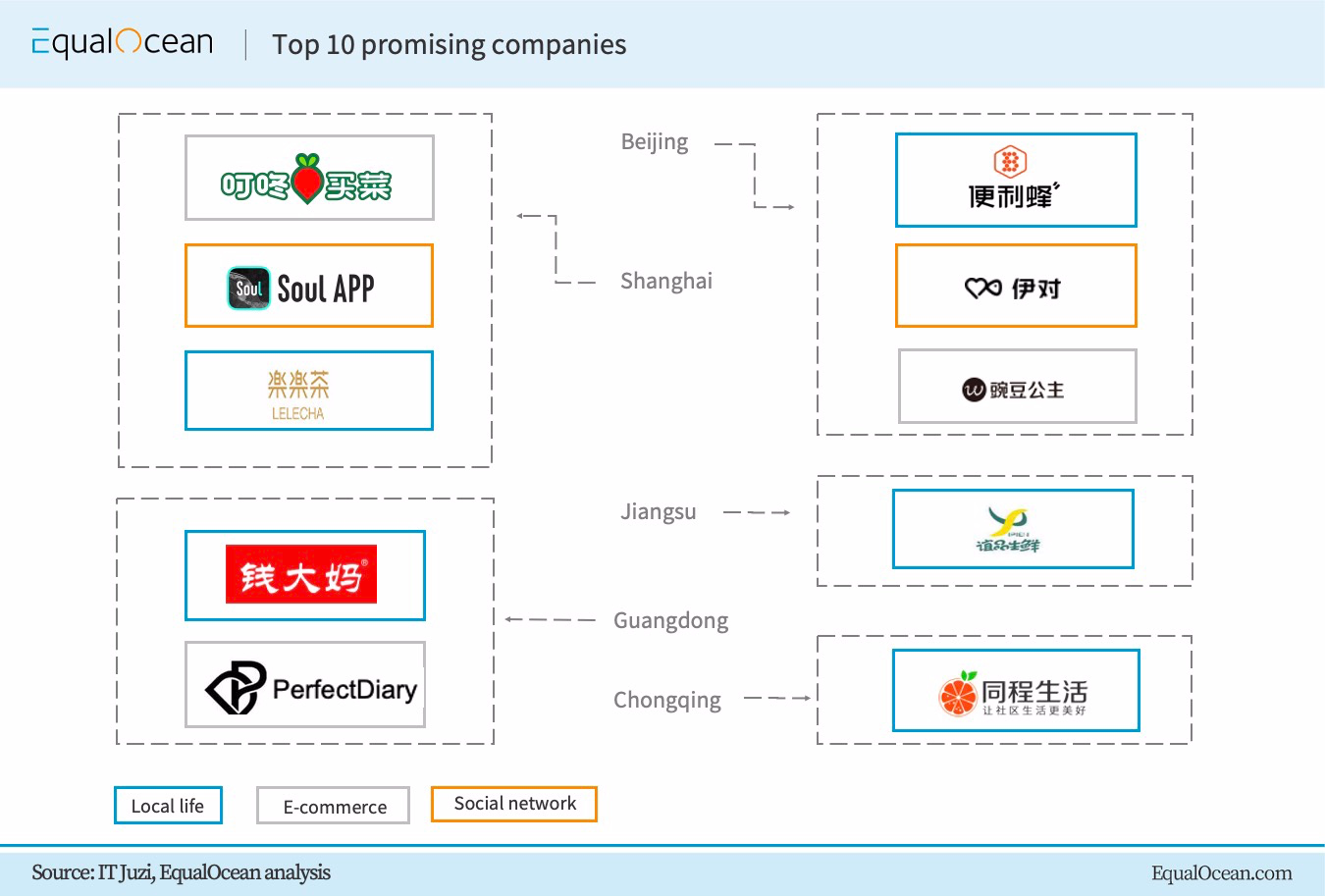 Qdama, a fresh agricultural products provider, enjoyed a valuation of around CNY 10 billion after completing a Series D financing of CNY 1 billion half a year ago. Among competitors in the fresh food track, the firm saw a gross margin floating from 20%-25%, with only 5%-10% waste, while the supermarket’s waste rate is up to 20%-30%. Besides, Qdama opened more than 600 stores in the single year of 2018, almost the sum of the previous five years, and more than half the stores achieved profitability within half a year.

Tongchengshenghuo (同城生活), a Jiangsu-based community group buying invader, completed five rounds of financing in the past year, with a valuation of CNY 2.4 billion. Among them, the Series B set a record new high in the community group buying field. Launched in 2018, the company provides consumers with high-frequency products such as fresh ingredients. WeChat groups and applets contribute a powerful traffic entrance, helping the company to grab users.

Lelecha, focusing on ‘tea + bread,’ nabbed a CNY 200 million financing in April 2019. Though the company hasn’t achieved profitability yet, while the other two giants Heytea a Nayuki already made profits, the latecomer applied an end elimination system for products to closely follow the public’s taste and further increase users’ stickiness.

Yipin Fresh received up to CNY 2 billion Series B funding in March 2019, after two years. To ensure products’ quality, the company acts as a wholesale market instead of purchasing from the wholesale market. Besides, focusing on offline stores and establish partnerships with suppliers in wholesale channels significantly reduced costs.

E-commerce eye-catchers. Wandougongzhu (豌豆公主), a cross-border e-commerce platform aiming at Japan’s brands, announced a Series D financing of JPY 5.3 billion in January 2020. Unlike other platforms that focus on global products, such as Tmall International and Kaola, Wandougongzhu is aiming at the rapidly growing vertical track in the Japanese market. Played as a China-Japan Commodity Hub, the unicorn captured exquisite labels for Japanese products, as Chinese people are increasingly pursuing a higher consumer experience for personalized products.

Dingdongmaicai (叮咚买菜) closed a Series C financing of CNY 1.95 billion in May 2020. Engaging in delivering fresh vegetables, the company recorded high revenue growth, increasing from CNY 38 million in 2017 to more than CNY 5 billion in 2019. Amid the epidemic, daily active users ranked third among fresh-food e-commerce platforms, surpassed only by Fresh Hema and Duodian (多点).

Social network stars. Blind date platform Yidui (伊对) completed Series B financing in June 2020, led by Xiaomi Group and Sky9 Capital. With more than 40 million registered users, Yidui saw a 50% MoM increase in downloads during the 2020 Spring Festival. There are around 240 million singles in China, accounting for 20.2% of the total population over 18-year-old. ‘Cloud blind date’ is expected to become an essential channel for young people to get rid of singlehood.

The personality matching APP, Soul, has attracted investment from Facebook and Snapchat, with a valuation of CNY 10.5 billion. Unlike Momo, Tantan and other good-looking-seeking apps, Soul has consistently focused on soul-match dating. According to Quest Mobile, Soul’s MAU exceeded 5 million, and usage time per capita reached fifth place among social platforms in 2019. However, the platform needs to solve how to increase users’ retention rate; in other words, how to avoid the rapid transfer to WeChat after the initial dating needs are met in the app.

Taken all together, these companies stand a good chance of arousing investors’ interest through unique competitive advantages, despite the sluggish PE/VC market.