Positioned as the hybrid of Tencent and Huawei, ByteDance is supposed to apply technology advantages to its new track layout. 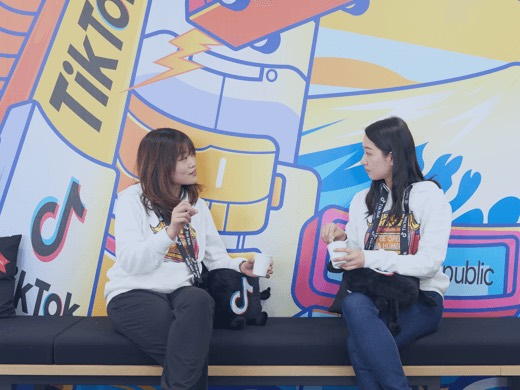 ► As chips have been a hot spot where BAT names can be found moving hard and fast, following in the steps of the leading three tech giants is a tempting strategy.
► New business representatives are always specially involved in new national policies such as 'new infrastructure.' As a result, ByteDance has no reason to miss the chip industry, an area supported strongly by the government.
► Internet giants are continuously looking up new initiatives that may form the next direction, such as Cloud services and IoT, so the chip industry which is already grabbing attention is expected to be the next focus as the US intensifies a ban on Chinese high-tech enterprises.
► ByteDance recorded CNY 150 billion in revenue in 2019 with a compounded annual growth rate of 178.8%, indicating sufficient capital support to invest chip in the next couple of years.
► The company might have high intentions for research on chips due to their money-making products needing better support for data processing. For instance, killer apps such as Douyin and TikTok, which have a massive user base, have rising requirements for data processing. With self-developed products such as smartphones – developing fast through the acquisition of Smartsan and brands in the gaming industry – the company is exploring triggered demand as well.

As Huawei's 5G networks are taking shape, the US is intensifying its ban on the tech giant, claiming that any company that uses American technology is prohibited from providing services to Huawei. Along with prior restrictions on ZTE and other companies showing up on the 'Chinese entity list,' the new interdiction is undoubtedly a heavy blow to China's lagging chip industry.

China imports chips at an increasing rate, recording USD 312.1 billion in 2018, while the US supplies nearly half of the world's chips. With a high entry barrier and massive investment, the chip market has been monopolized by a few developed countries such as the United States, Japan and South Korea. Invading into the chip field seems an attractive way for Chinese star firms to shine on the global stage.

ByteDance, a unicorn with a USD 75 billion valuation, has always engaged in global strategy. In 2019, the company applied for a digital banking license in Singapore, expanding its business in Southeast Asia. As of April 2020, TikTok, a short video platform, exceeded 2 billion global downloads, surpassing YouTube to rank seventh among all apps. Besides, on June 1, 2020, Kevin Mayer, the former Disney chief strategy officer, joined ByteDance and was in charge of the global department.

ByteDance has achieved what its ‘predecessors’ the BAT companies have not – making a global product like YouTube and Facebook. As it has surpassed the BATs in telling an international story, ByteDance is now strong enough to enter the chip industry – either through acquisition or strategic investment, in our view.

Inferring from BAT and ByteDance's past layout in each industry 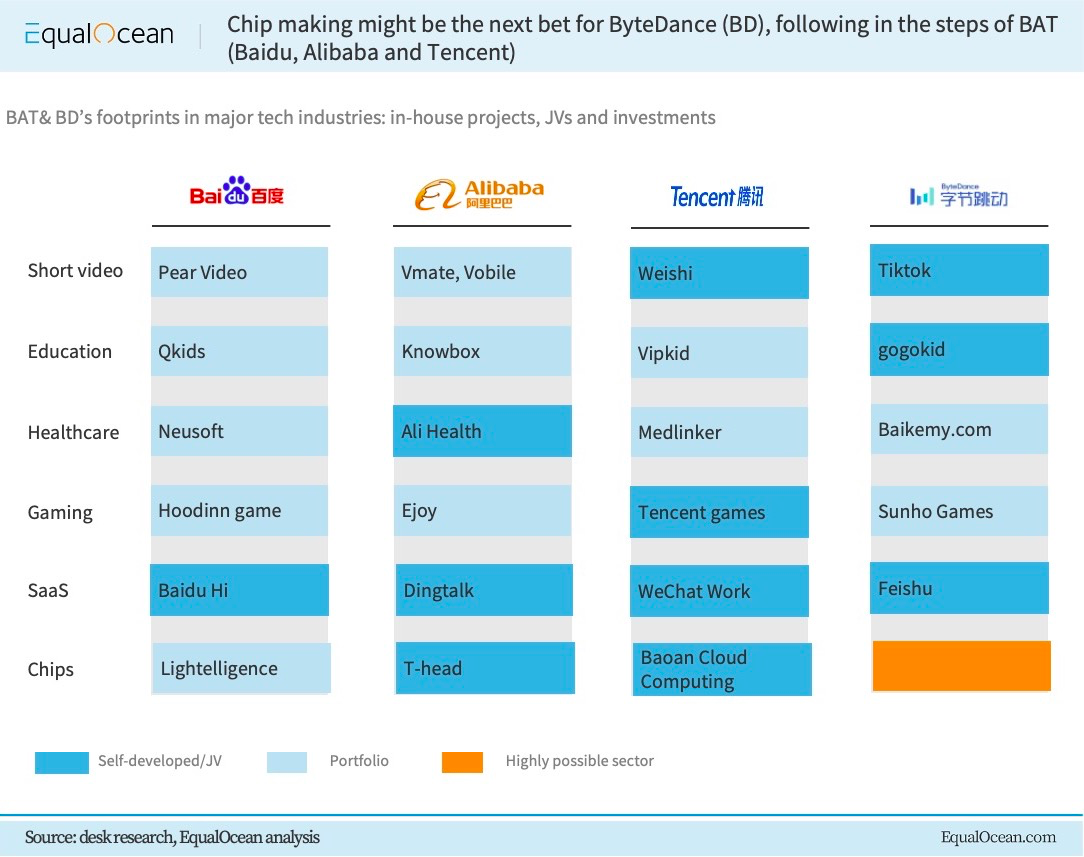 Founded in 2012 and has rushed to the forefront with its short video platform TikTok, ByteDance is committed to comprehensive development and ambitious growth, eating from each slice of the cake that BAT brands have already carved up, including messaging, education, healthcare, gaming and SaaS. ByteDance seems to be on the heels of Baidu, Alibaba and Tencent all at once. After seeing the top three internet giants' layouts in the chip industry, the technology-driven company is eyeing the chip market.

Baidu (BIDU:NYSE) has announced that, by 2030, the number of Baidu's intelligent cloud servers would exceed 5 million to fill out the new infrastructure. At the same time, ByteDance officially established an IoV team, planning to launch its vehicle infotainment system solution. Combined with a huge traffic entrance backed by TikTok and Jinri Toutiao, ByteDance's big data and algorithm technology has a good chance of catalyzing the development of autonomous driving.

To get rid of dependence on foreign technology, China implemented tax reduction policies for chip manufacturers in 2018, followed by a USD 29 billion investment to support the chip industry in September 2019. To respond to national policy, BAT successively laid out as well, such as Alibaba's PingTouGe, a self-developed semiconductor company. From this perspective, ByteDance, ambitious to replace BAT's B, has no reason to miss the chip's prospect.

Investors have been looking forward to the company's new initiatives 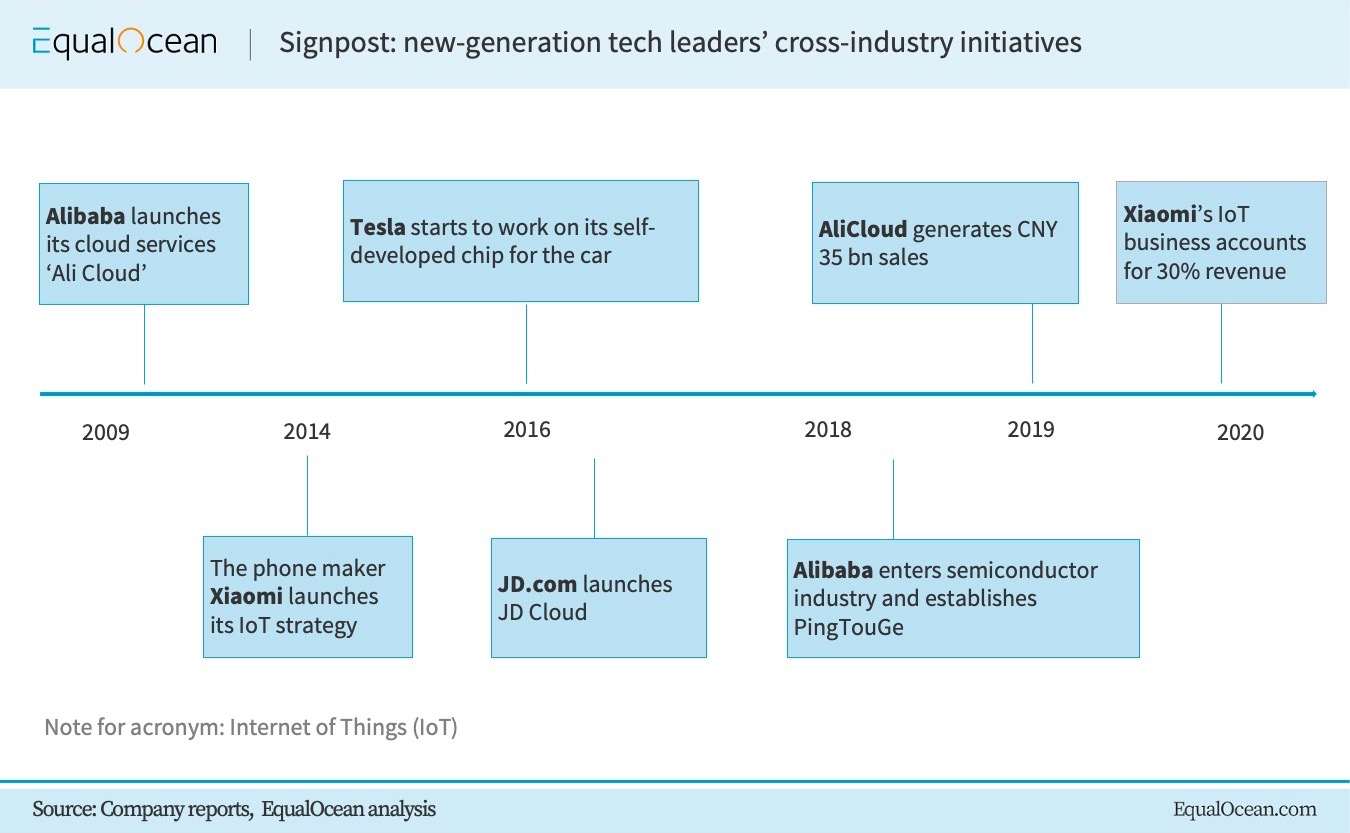 Seeing that e-commerce business was getting mature, Alibaba launched Ali Cloud in 2009, aiming at a 'big data + cloud computing' strategy. Ten years later, cloud services have long become a must-have for major Internet companies such as JD.com and ByteDance, while Alibaba generated cloud revenue of CNY 35.525 billion in 2019. According to IDC, Alibaba Cloud's market share in the intelligent voice field reached 44% in 2019, ranking first in China, followed by Amazon AWS.

Xiaomi reached its peak in the mobile phone business in 2014 and began to layout the IoT industry to develop Xiaomi’s ecological chain. After five years, the IoT segment accounted for around 30% of revenue. Xiaomi won the largest market share in the TV industry in the domestic and Indian market and became a global championship in the wearable devices field. With the advent of the 5G era, the IoT market will shape the next boom in hardware.

As the US cracked down on Chinese high-tech companies, especially Huawei, domestic replacement chip has regained attention. The chip industry is now at the center of a storm of uncertainty but has high potential to become a hot growth spot shortly, as cloud computing and IoT develop. Tesla (TLSA:NYSE) and the BATs have broken into the chip industry sooner or later. With the gradual saturation of the number of TikTok users and the blockade of the platform in markets such as the US and India, for ByteDance, why not turn towards such a promising industry as a new profit engine?

The chip industry is a money-burning one, from IC design to the foundry to packaging and testing. As a result, many chip companies have gone bankrupt one after the other due to broken cash flows. Internet giants are unable to finish the whole process. However, they can invest in semiconductor companies to follow high-tech trends – and developing relatively easier AI chips seems reasonable, as per the example of Alibaba.

Alibaba established the PingTouGe semiconductor company in 2018 when the e-commerce behemoth had reached CNY 300 billion revenue. One year later, the firm released the first AI chip, 'Hanguang 800,' which has been used in multiple scenes such as video image recognition and search function in Taobao. Alibaba expects the chip to be used in medical imaging and autonomous driving in the future. 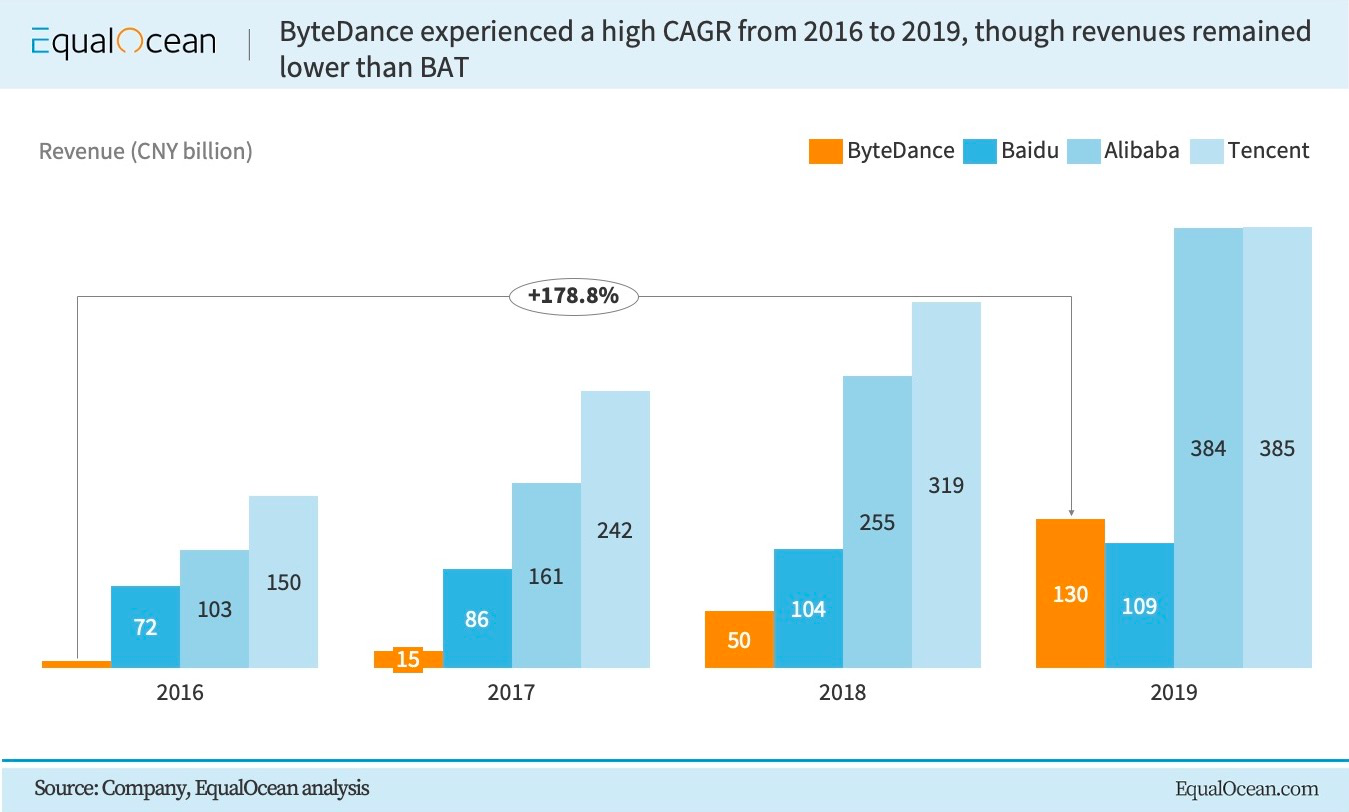 ByteDance generated revenue of CNY 150 billion in 2019 with a compounded rate of 178.8%, faring exceeding BAT's revenue growth rate. Following this trend, ByteDance has a high potential to catch up with BAT in terms of earnings, seeing more than CNY 300 billion in the next two years. With sufficient capital support, the technology-driven company should be able to develop its own AI chips – not accounting for strategic investment in semiconductor companies.

Multiple successful examples support this position. 1) Ali Cloud thrives from its large e-commerce and third-party payment platform data pool such as Taobao and Alipay. 2) Baidu Apollo’s success relies primarily on the user's data. 3) Tesla's self-developed chips derive from its autonomous driving system. From this perspective, new initiatives have always been triggered by existed businesses and products.

When ZTE was banned by the United States in 2018, Yang Zhen, ByteDance Vice President, said "ByteDance has billions of users worldwide that upload videos that need to be analyzed and processed in TikTok. And this process means the purchase of a large number of chips." If the smartphone plays or records video for too long, the phone is likely to overheat. Therefore, the need to improve video performance and reduce power consumption triggered the motivation to develop AI chips.

There is a rumor that Douyin is working with Aegis, a fingerprint identification IC factory, to develop AI chips. The product is expected to win orders from major smartphone manufacturers such as OPPO, Vivo and Xiaomi (01810:HKEX). Besides, ByteDance acquired Smartsan's partial business in 2019 to launch smartphones. To avoid repeating Huawei's misfortune, applying the self-developed AI chip to the self-developed mobile phone seems attractive.

Whether from the perspective of strategic layout or capital requirement, the allure of chipmaking for ByteDance is too attractive to miss.

CONTACT US
Scan QR code to contact us for professional consulting services
Next article
China’s Semiconductor Scene, SMIC and Its Star Market IPO